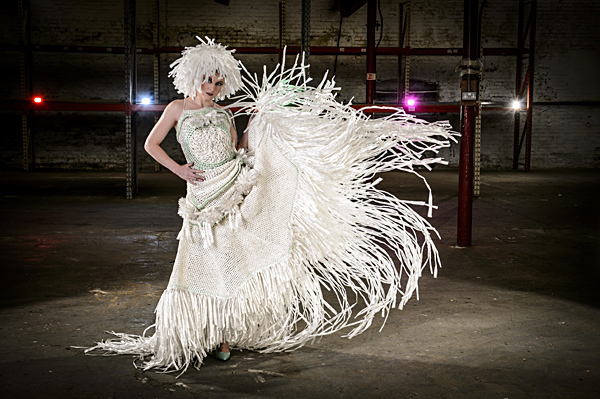 Right at the end of October, I received a phone call out of the blue from renowned fashion designer Adnan Bayyat in Manchester. Basically, he was to both open and close the first day’s show at the London Fashion Week with Fashions Finest. His main issue was the fact he needed images of two collections ahead of the show to capitalise on this opportunity. Apparently Adnan already had everything in place, right up to the point where his photographer pulled the plug and let him down. Not just with the photography, but also the locations and models were withdrawn too. We had less than a week to get everything in place, and due to the time restraints, it would all need to be shot in one day.

The Avant Garde collection was to be shot on location, ably sourced for me by Jonathan Wolstencroft of Rent a Unit, a commercial letting agent based in Nelson. (Yes Jonathan, I know I still owe you big time for this!)

The Couture collection was to be shot in the studio, and all told, it was going to be a long, long day!

The above image with Emma Jenkins, features the dress designed for and worn by Lady GaGa, using 2,500 meters of cling film. I kid you not!

Five speedlights were placed on the racking at the back of the room, each gel’d with a different colour and set to 1/16th output. Enough to give a bit of interest, but not cause flare.

The main fill was placed camera right at about head height, and consisted of a Lencarta Safari II, firing at 1/8th output through a 150cm pro-fold Octa fitted with a honeycomb.

The accent light along Emma’s right arm is supplied by another Safari II on a high stand, firing at 1/4th output through a gridded 70cm white beauty dish. 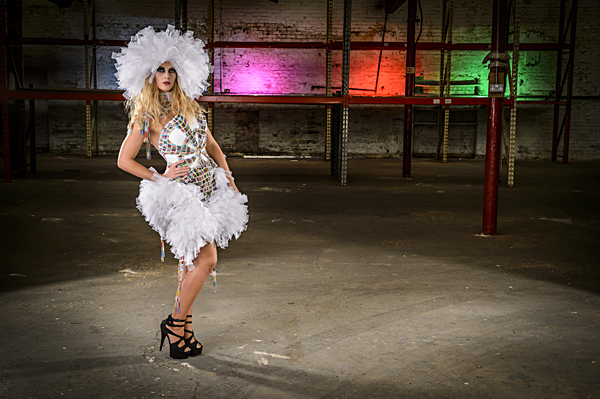 This is Josephine Henry with a dress that has a distinctive textured look to it, not least due to all the paperclips used. Main light moved to camera left, still firing at 1/8th output through a 150cm pro-fold Octa fitted with a honeycomb.

Accent along Josie’s right arm is still from the same Safari on a high stand, firing at 1/4th output through a gridded 70cm white beauty dish.

A little extra accent is seen along Josie’s left arm, and is provided by a Lencarta Atom 360, firing through an 80x80cm folding softbox, attached by an S fit adapter. It was firing at 1/8th output and placed just out of frame and just a little further back than Josie. Check the shadows to see actual light path. The three lights were all moved in a little, and I increased the aperture to f8 to compensate. That said, I also dropped the shutterspeed to 1/60th sec to take in more of the ambient light.

The speedlights were all turned around to face the wall, and had their output upped to 1/8th. 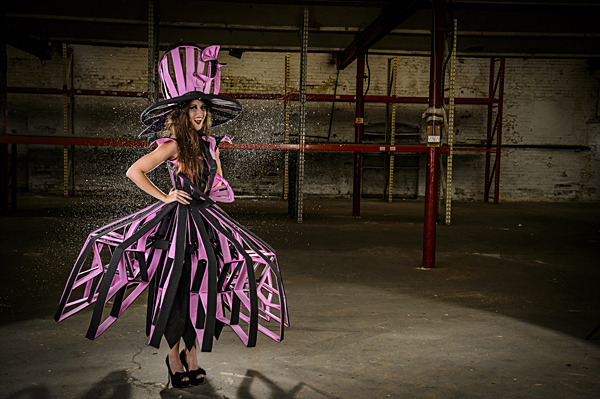 I did away with the two accent lights, and instead went for rim lighting from an Atom 180 positioned behind the model and firing through a beauty dish and grid at ¼ output. This lightsource was also going to highlight the glitter when thrown from above.

Main light is camera left as above and unchanged in power output. The Atom 360 that was firing through the 80×80 softbox was brought further around towards me, and the power output remained the same, but due to the increased distance, it became a lighter fill than the main. You can see a little more detail in the texture along the outfit frame left, giving it more “shape” due to the fall off and less light frame right.

Wayne was atop a ladder doing the glitter chucking bit. He managed this better than he did when throwing milk at Emma!

We started at 0800hrs and finished at 0100hrs the following morning. The location shoot took us till 1600hrs, and the remainder of the time was spent in the studio shooting the Couture outfits, and will be covered in another post.

Adnan can be found at : www.adnanbayyat.com

Fashions Finest can be found at : www.fashionsfinest.com