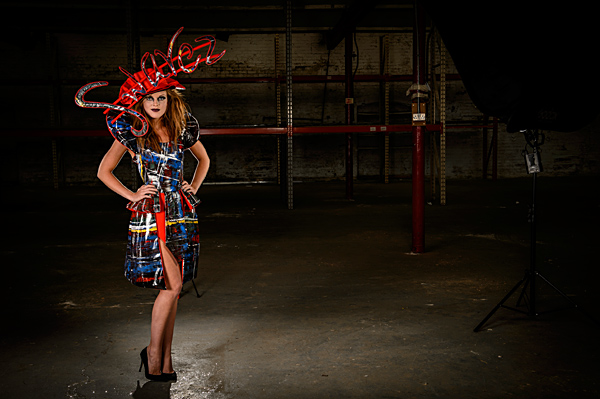 Part of Adnan Bayyat‘s collection for London Fashion Week and Fashions Finest included something a little special. The artist Swarez kindly donated two painted canvases, which had been very carefully prepared by Swarez to be supple. Each of these canvases had a five figure value, and it was certainly a unique material, texture and design.

So, with such valuable material, Adnan of course was very careful when he cut them into pieces! Well, you would, wouldn’t you.

For the above image, I particularly wanted Jenny and her outfit to pop, with the background kept quite low key so as not to distract the eye. I kept the ISO low at 100, which when combined with a fast shutter speed of 1/250th sec would greatly reduce any ambient light present. The next step was to separate Jenny from the background, giving her a nice clean edge and an almost three dimensional look. I positioned a Lencarta Atom 180 immediately behind her, firing at ¼ output through a standard reflector.

I now wanted to define the shape of the dress across the front and placed an Atom 360 camera right…….. Well, you can see it in the image, although it’s a little misleading. What you can see is a folding 80x80cm softbox camera right that is used to illuminated the front of the dress. The stand you can see beneath the softbox is actually slightly further back than Jenny, and supports an Atom 360 firing through a gridded beauty dish at ¼ output, which is firing across the dress to develop any folds or texture. It also adds a nice accent light along Jenny’s arm and collar. The 80×80 softbox you can see lighting the front of the dress, was firing at 1/8th power.

Finally, a fourth Atom was placed camera left, another 360. This was again couple to a gridded beauty dish with an output of ¼ and provided the accent lighting along Jenny’s right arm.

At this point, whilst I was happy with the above image, I just felt it lacked the “buzz” such a fabulous dress should generate. Considering the material came from a world famous artist, re-imagined by the fashion industry’s brightest star, then surely it would create a huge media buzz. Well, I would just have to create my own media buzz.

The lighting for Jenny is basically the same as the first image, although moved slightly. The rim light behind her is exactly the same as before, and in this image you are able to see the feet of the stand if you look carefully. The two accent lights either side are pretty much unchanged. The main light has now been brought almost central, and is alongside me, just to my left. The settings for the lights are all unchanged, as the distance from each to Jenny is roughly the same as in the first image.

The “photographers” (Ha!), who were three models plus Adnan and Wayne, all held speedlights to their faces to mimic a paparazi ambush. All speedlights were set to 1/8th output, and most had stofens fitted. The stofens were there to spread the light amongst our photographers and increase the visible detail in the group.

This is one of my favourite images from the location part of the day. Oh, Adnan is 2nd from the right.   🙂 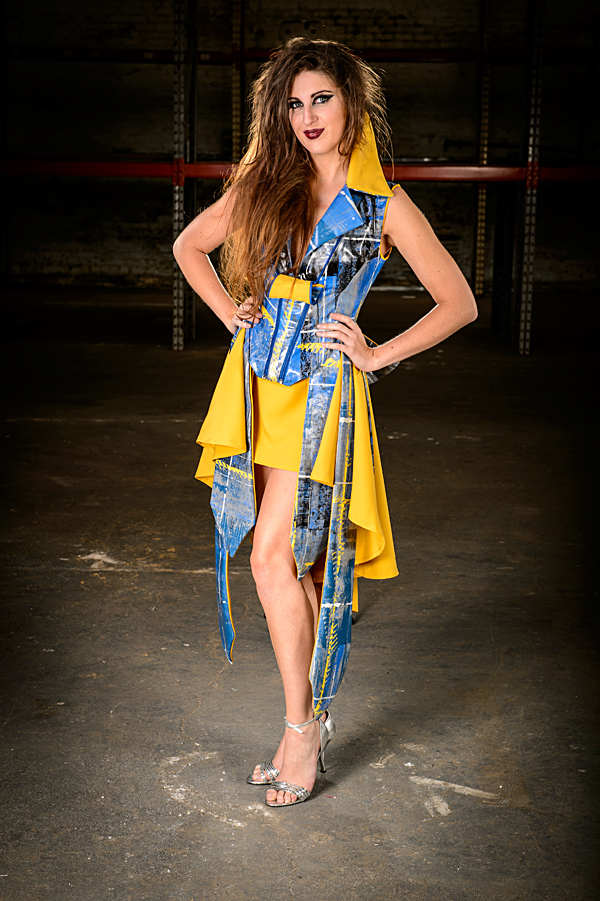 This is the second canvas donated by Swarez. Both the first and second canvases were actually part of the Couture collection, the remainder of which were shot in the studio later that day/evening/night.

This image was taken just after the paperazi shot, and the location of the lights, their settings and the camera setting remains the same. 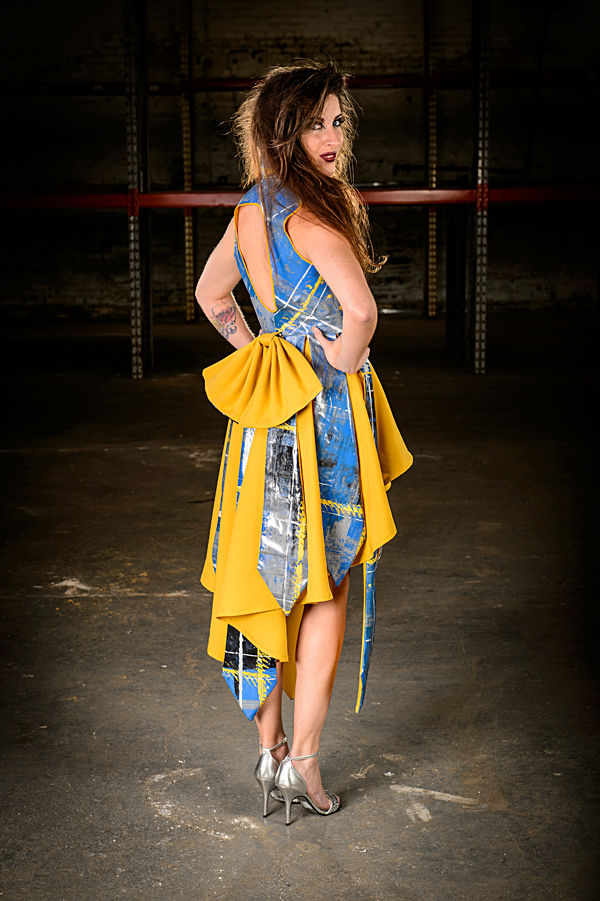 And again, other than the model presenting her back to the camera, there is no change.

Between you and me, and don’t go mentioning this to Swarez, but I was quite skeptical regarding the longevity of a painted canvas dress. I mean, c’mon, it’s going to crack and it’s bound to be rigid.

Why do you think I’m a photographer and Swarez is an artist. Why should an artist not know his materials and tools inside out, in exactly the same manner as I know my equipment and tools. What to use where, how it will react in a given environment and what the end product will look like before I even click the shutter. The dresses were incredibly supple, and both girls said they were very, very comfortable. Which is as much a testiment to Adnan as it is to Swarez. I also photographed the dresses at the London Fashion Week, and although they’d been worn several times, thrown about in the back of a van (Best not mention that bit to Swarez!), they were both indistinguishable from new and the paint finish was absolutely immaculate!

Fashions Finest can be found at http://www.fashionsfinest.com