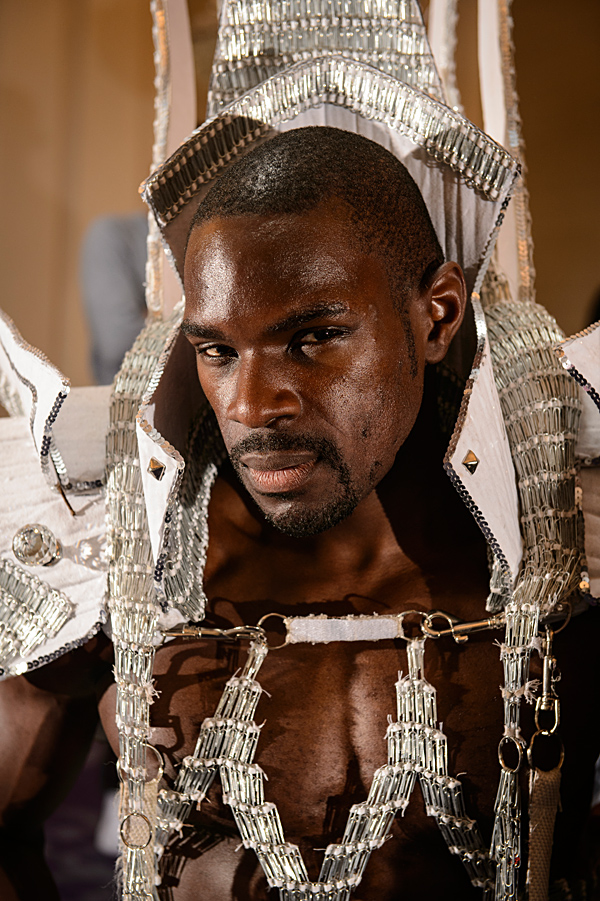 Well, the final destination of Adnan’s journey to London Fashion Week and Fashions Finest, and it’s certainly been interesting. After a very long and intensive day’s shooting, both on location and in the studio, we finally made it. And now?

Well, Adnan had been quite specific. He wanted a photographic record of the day’s events, including preparation, the catwalk and anything going on around the show. Sounds straightforward enough. And my previous experience with catwalks and fashion shows would undoubtedly stand me in good stead. I mean, c’mon. What could have changed?

Well, pretty much everything.

Better organised for a start. The folks at Fashions Finest were on the ball, right from the getgo. They knew who needed to be where, what they needed, and when they would need it. Very, very slick. SO when Adnan dropped a spanner in the works by arriving with three times the number of outfits than any of the other designers, not a single eyelid was batted. They simply juggled a few things and the solution was sorted within minutes.

Not one solitary light. Not even a speedlight. Only an odd on-camera popup flash. 🙁

This rather took me aback.

Ok, so I was going to be the black sheep, because at the end of the day, I was there to get the best possible images for my client. And that would mean lighting them.

I had a number of tiny speedlights in my kitbag, chosen specifically for their packable size, rather than output power or recycle time. Definitely not the recycle time!

Now, because I was travelling light, and I do mean light, I didn’t have any lightstands. I remembered how packed and hectic the fashion shows had been in years gone by, so I knew lightstands would simply get knocked about. Believe me, Gaffer tape is your friend!

The first speedlight was camera left, tucked into a clothes rail with a strip of gaffer to stop it careering to the floor at the slightest jolt from a passing model. I also taped a stofen over the front, and set the output to ¼.

The second speedlight was camera right and laid on a table, again with a stofen and set to 1/8th output.

Yes, I know it’s on the harsh side, but it works. 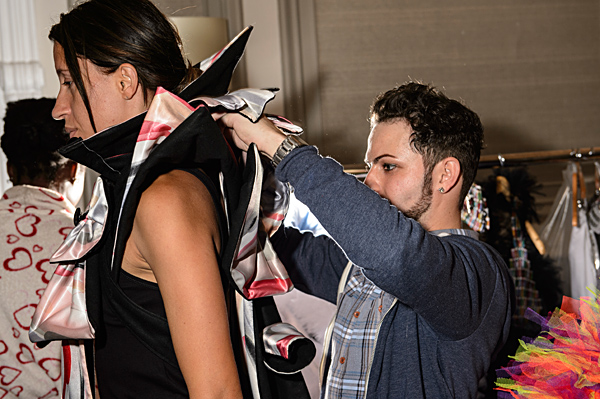 The above was actually a chance image, as Adnan prepared one of the girls near the clothes rail. The very rail I had a speedlight strapped to. A quick re-location of the second speedlight to be almost alongside me. I should possibly have turned it down a tad, if I were to be honest, as I think it’s a little too bright. I do like the rim light though. 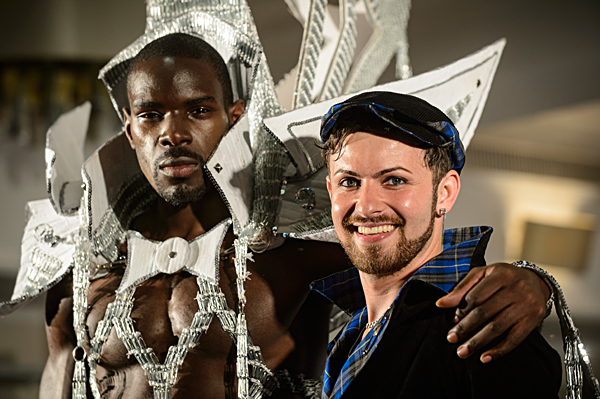 The catwalk caused me a lot more problems compared with the preparation area. For a start, the press stand was absolutely rammed, to the point that manners seemed forgotten. Well, until the Stage Manager from Fashion’s Finest weighed in and sorted them out. The guy was a legend 🙂 I just wish I could remember his name.

EDIT : The gentleman is the Creative Director, and is known as Mr. Mahogany, and can be found on twitter here. He also has a blog on Fashions Finest Website here. Thank you to Fashion’s Finest for letting me know

Me? I didn’t need to be at the head of the catwalk anyway. I’d gotten the images I needed of Adnan’s outfits out on location and at the studio previously. This was to be a record of Adnan’s achievements at the show, so taking up a position outside the press stand meant I could wield a camera without taking anyone’s eye out, and nor would I have someone’s elbow rammed up my nose either!

During the practice session for the catwalk, I positioned one of my speedlights far left, taping it to a support on a lighting rig at about six feet high. Output was set to ½, which meant the recycle time was going to be a good couple of seconds 🙁 I also had to gel the speedlight for tungsten, as all the lighting around the catwalk was tungsten base, except for some of the small wall lights which appeared to be fluorescent based.

A second small speedlight was placed camera right and taped to a lighting rig, at about as high as I could reach, without making a fool of myself. Well, more than usual anyway.

The second speedlight was also set to ½ output and would naturally provide slightly less than the first speedlight as it was slightly further from the catwalk. Another tungsten gel was held in place by the stofen.

Both the small speedlights were aimed to crosslight the end of the catwalk, just where the models would pause. This was a real Heath-Robinson affair, and relied quite heavily on a number of factors, not least the models reaching a set point on the catwalk. And as anyone who shoots lit location work, sods law tends to hold hands with the inverse square law for some reason.

Not all models walked to the end, and most of those that did either span and walked off again, or stood smiling into the crowd with their back to me.

The camera settings were actually set so as to fairly well balance with the ambient, so as to be able to shoot the models much further down the catwalk without any adjustment needed, and the speedlights providing accent and shape at the head of the catwalk.

Anyway, the above image is actually one of the final images from the practice session, with Joshua and Adnan standing together for the press scrum. 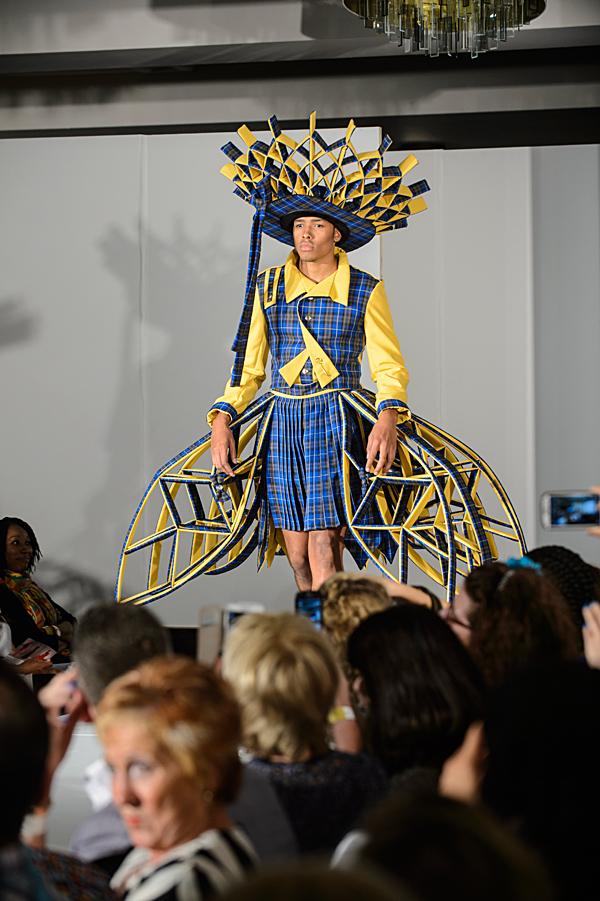 This is from the show, and whilst lit, it’s mostly the ambient within the hall doing the heavy lifting. My two piddly speedlights are providing a bit of accent and interest, but not much.

The last two images are basically ambient only, and serve to show the interest generated in Adnan’s work. 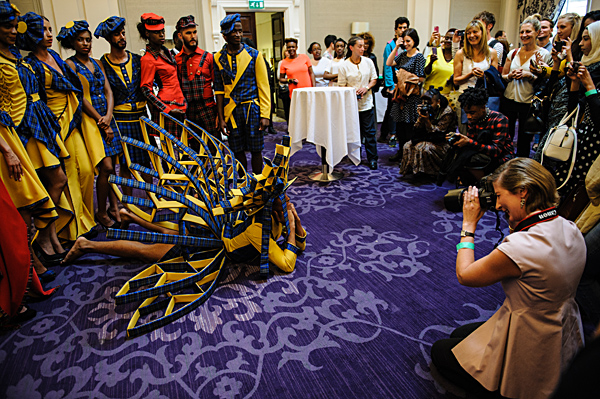 Once the models came off the catwalk after closing the show, they were basically mobbed by the press, and pretty much everyone else. The whole room seemed to be one big scrum. 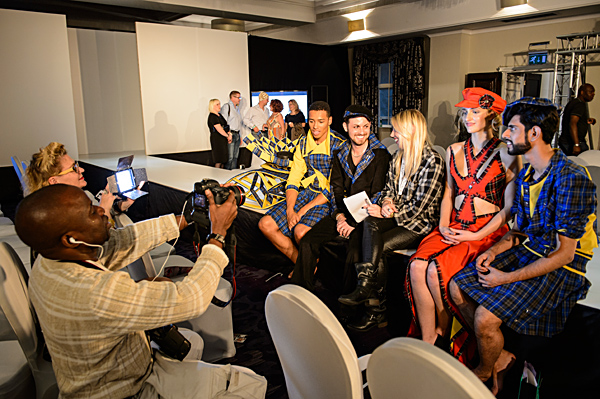 Adnan and a few of the models being interviewed following the show.

It was a long day, and very tiring. But it was a good day.

Plus, I didn’t lose any speedlights.

Fashions Finest can be found at www.fashionsfinest.com