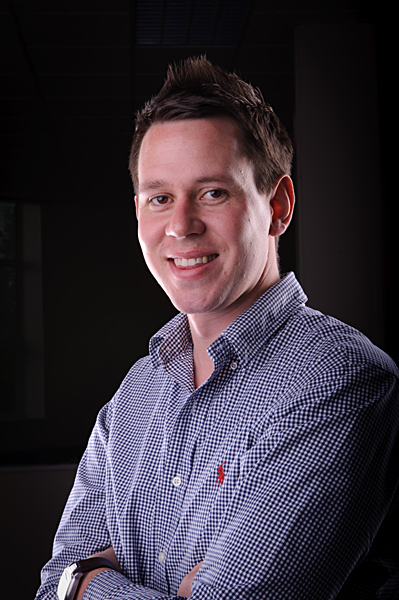 Meet Jonathan, a commercial estate agent based in Nelson, not a million miles from my studio complex. It was Jonathan that found the premises for me, and basically turned my business plan on its head, before opening new horizons for me.

Jonathan happened to mumble something about needing a decent image for his social media and upcoming press releases, so this was an opportunity to repay him for the new opportunities I now have.

The above image is the original headshot Jonathan had in mind, and shows Jonathan’s easy going nature. One thing about Jonathan, when he smiles, it tends to be a big smile which can make his face appear much rounder. I particularly wanted to avoid the additional “weight” this could possibly add to Jonathan in the image. I chose to employ a short lighting technique, coupled with highlighting the nearer jawline and cheek to reduce some of the detail a little there, and draw the viewer’s eyes to Jonathan’s face where it’s lit a little softer. This has the effect of “narrowing” Jonathan’s face from the viewers point of view.

Main, or key light was a Lencarta Elite pro 600, firing through a 170cm Oca just to the left of me, and at a height of just under two meters. The output was at 1/2, but the distance was greater. 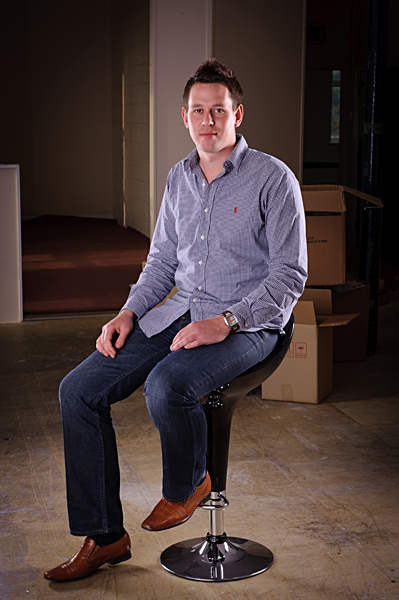 This image was to put Jonathan in context, with obvious vacant commercial premises in the background. Similar sort of setup to the previous image, although the stripbox to the right was brought lower, and angled relatively horizontally. The left strip box remained in the same sort of attitude, although both needed to be moved further away so as not to appear in frame. The key light (Octa) also required moving further backward as I stepped further back to get a full length shot. The output levels remained the same, but I needed to open up the aperture to accomodate the apparent light reduction on Jonathan due to the greater distance.

For this particular image, I also wanted more of the background to be visible, as it was important if I were to put Jonathan in context. If I had dropped the ambient by using a fast shutter speed, then the image would simply be of a some bloke sat on a chair in a dark room. Sure, that would work great if the guy on the chair looked shifty or wore leathers and had a rather rough air about him. But Jonathan? It had to be as relaxed and friendly as he is. The image had to say “Hi, how can I help?”. Consequently, the background needed to be seen, to supply a bit of a story to the image, but it shouldn’t be distracting from the main subject, Jonathan.