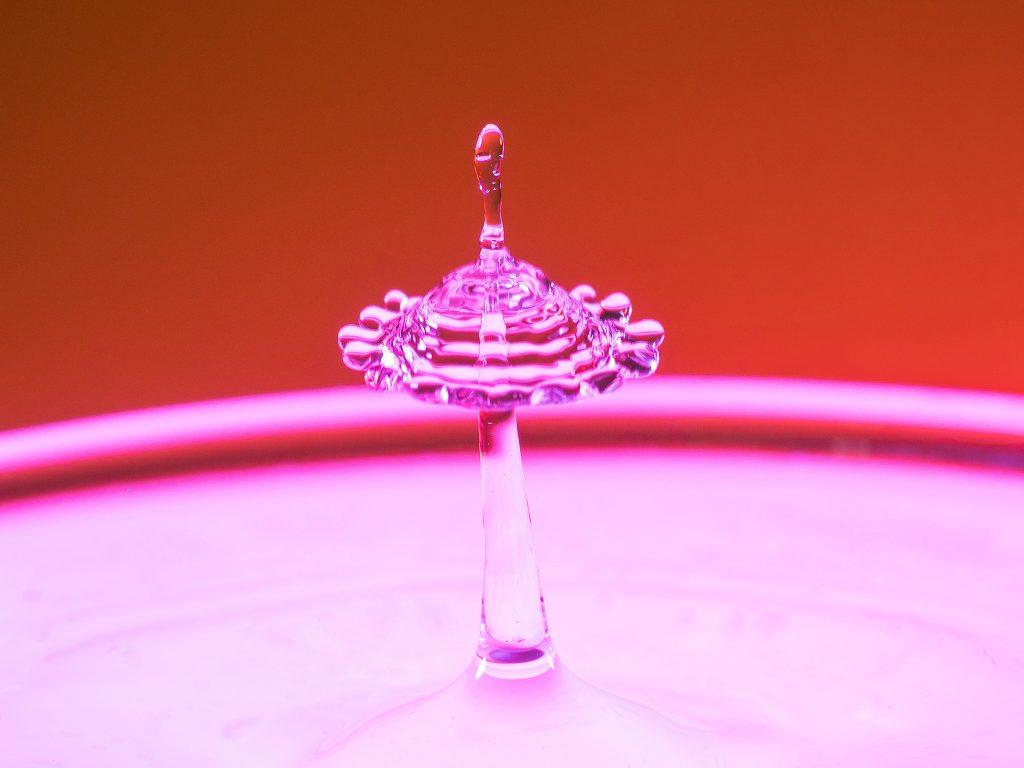 The Miops range of triggers have become an integral part of my work kit. The Miops Smart is just a phenomenal accessory producing real creative opportunities with my commercial work, and the Miops Mobile & Dongle make life so much easier.

So, given how these triggers have been such a good investment choice, I kinda cocked an eyebrow at the Miops Splash. This is their fourth product, and a read of the Miops website piqued my interest, but I very much doubt it could be integrated into a commercial workflow. I just couldn’t see a viable client use for it. But does every purchase need to be commercially based? What happened to the fun element of my photography? (Don’t get me started on that one!). Well, there’s really only one way to find out. 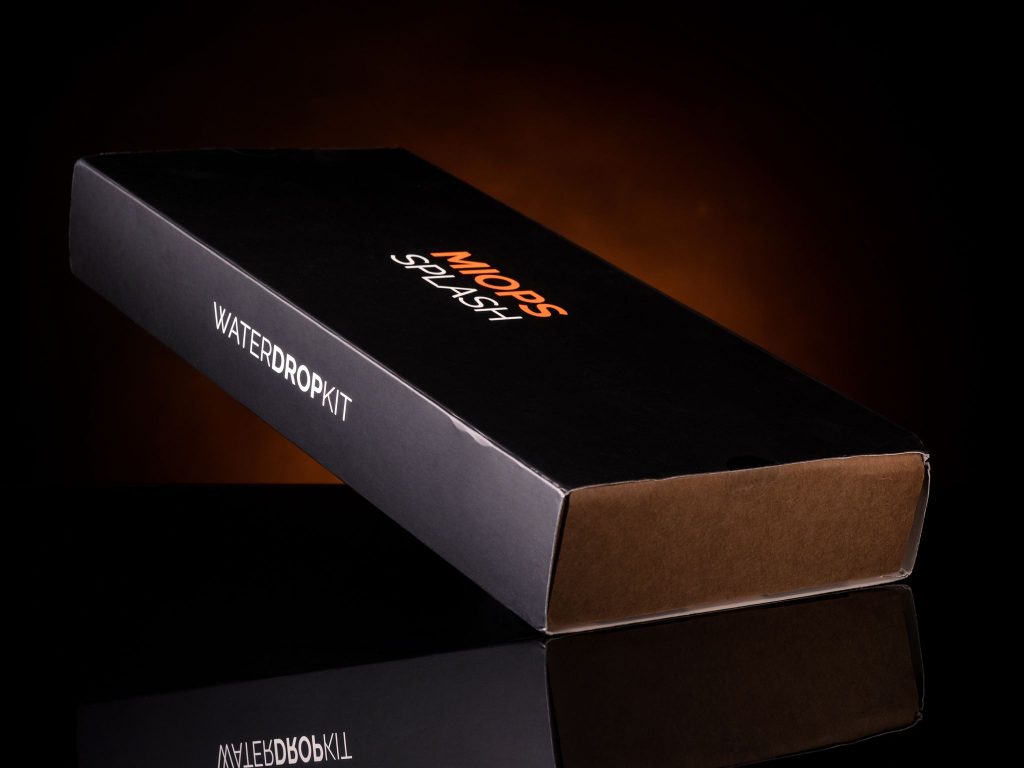 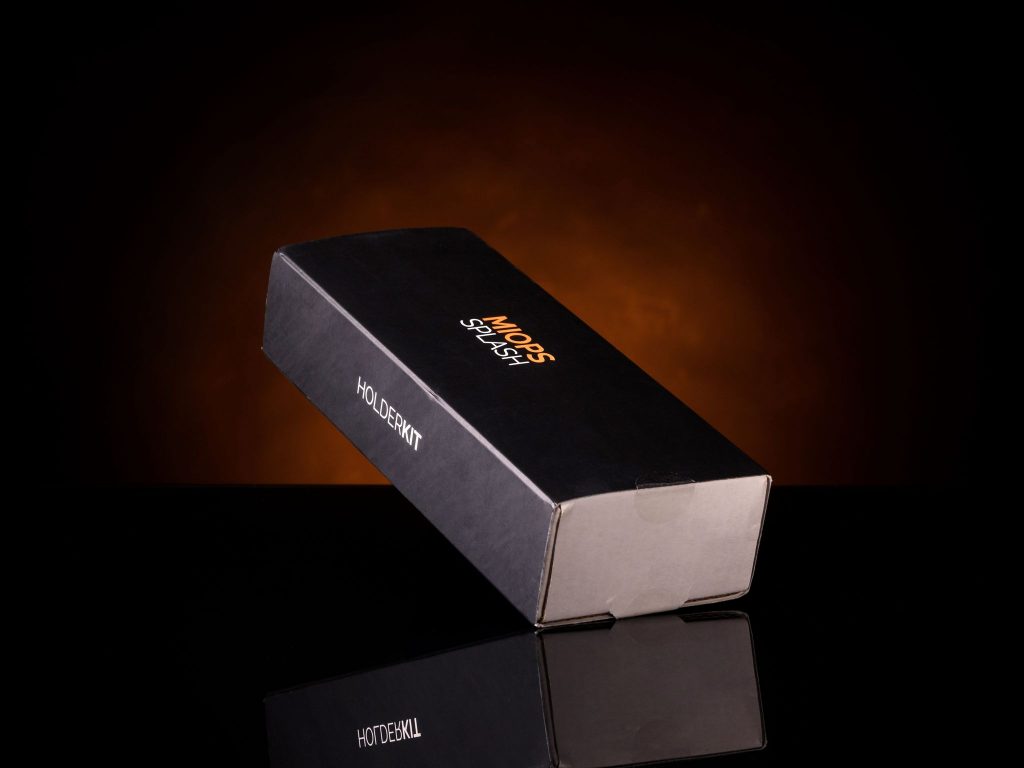 The larger box contained the Miops Splash and a quick start guide. 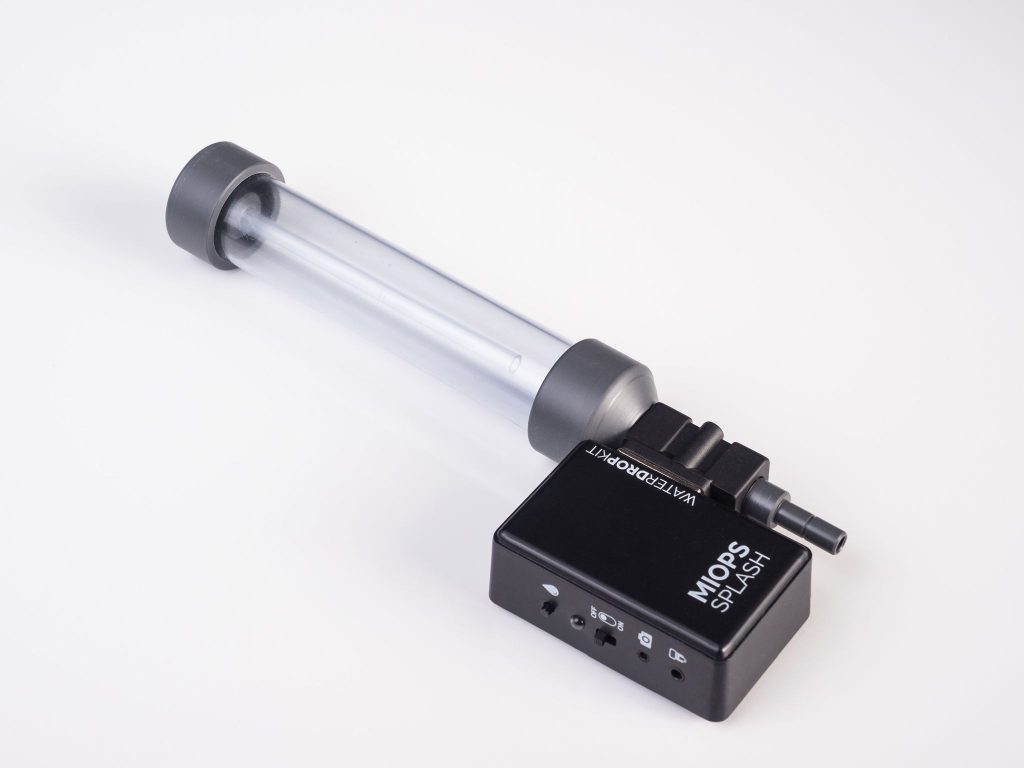 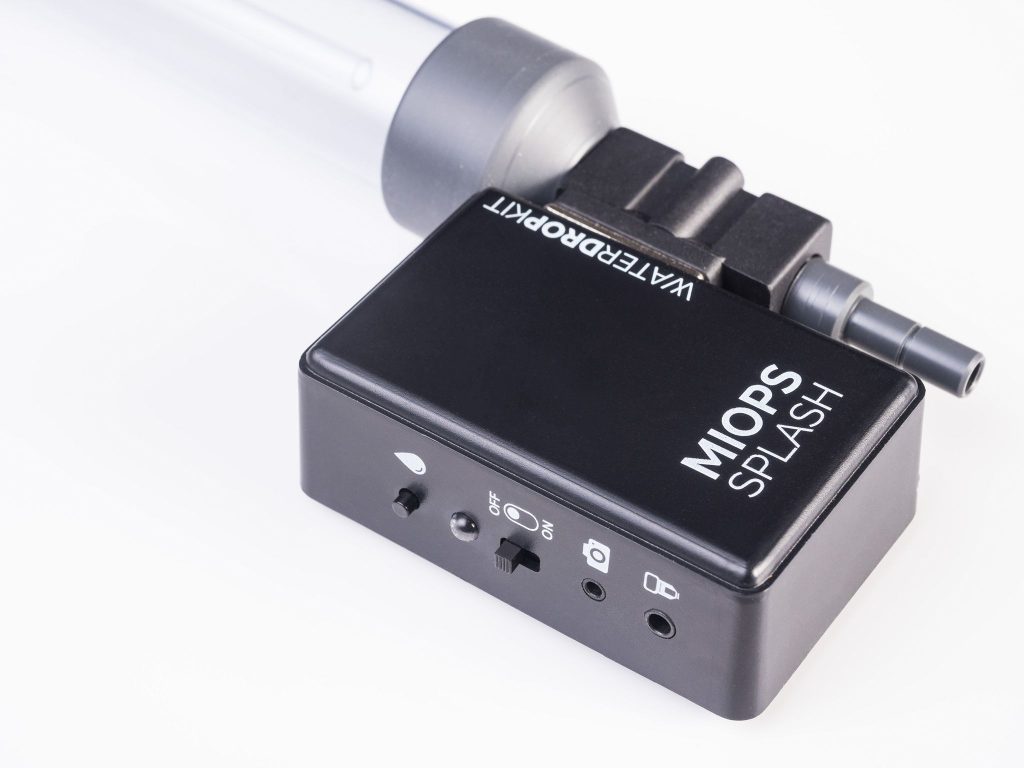 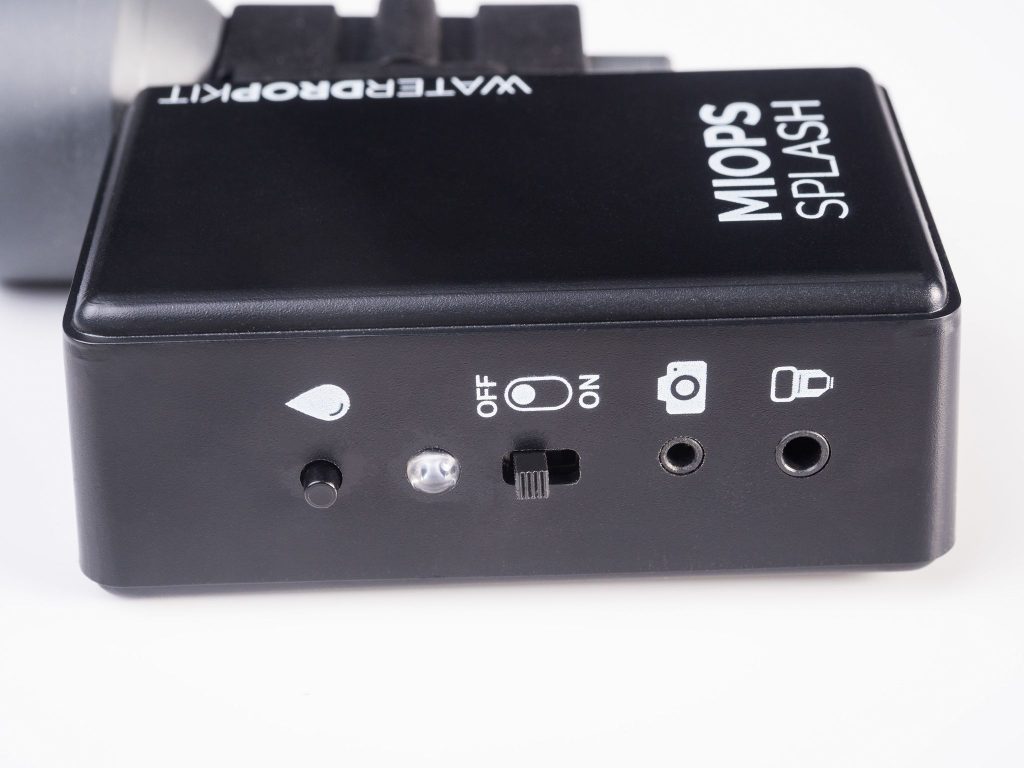 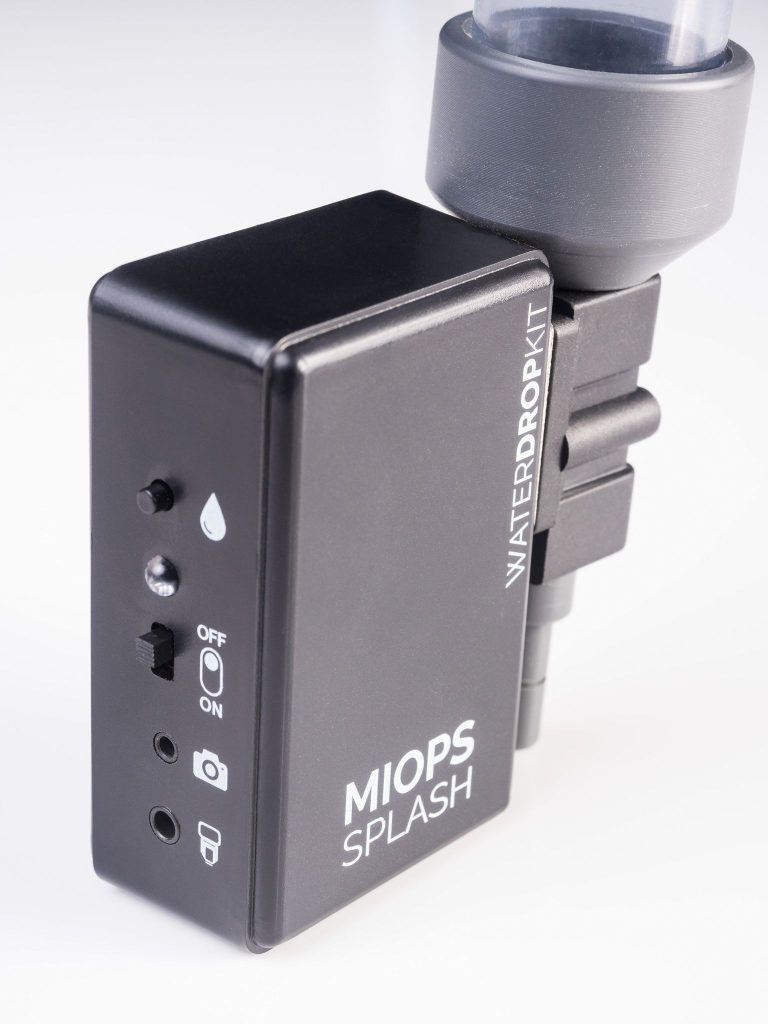 The smaller box contained the fixing kit, which is an optional purchase, but I would seriously recommend it if you want to keep your hair and/or sanity. 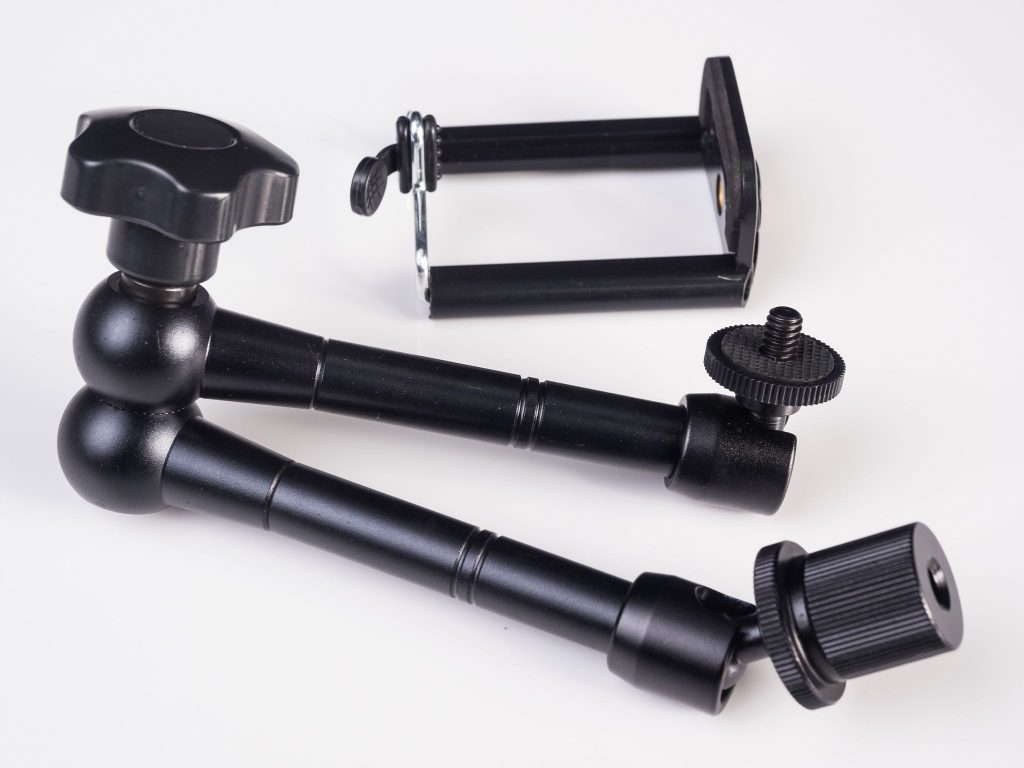 So, I read the quick start guide and started to assemble the shooting area. A small table with yellow background paper. A shallow bowl filled with water that was coloured black using food colouring, and stood on a plate to catch any overflow. I originally mounted the fixing kit to a table tripod, and whilst it was stable, it didn’t get close enough to the bowl without fouling the camera, or getting in the way of the lights. I changed tactics, and fitted it to a clamp, which was firmly tightened down on the edge of the table alongside the camera. I have to say, the fixing kit is very flexible when loose, allowing positioning of the Miops Splash with ease. Once tightened, it’s going nowhere!

I placed the Miops Splash in the clamp of the fixing arm, and then filled the reservoir with red coloured water. So far, so good. Well, until I placed the cap on top of the reservoir and pushed it home quite hard.

You know how you can sometimes read instructions, and you still do something stupid?

I had a jet of red water from the top of the reservoir that went five feet in the air, before covering me, the paper backdrop, the camera and the floor. It was everywhere!

Fifteen minutes later, I was ready to start again, after mopping the floor, cutting off a piece of the background and drying off the camera. Unfortunately, my cream coloured jumper looked like I’d murdered someone.

So, moving on to my choice of lights. IGBT based lights are an obvious choice, due to their short light duration, which is used to freeze the motion of the water drops. You can use voltage controlled lights, as I did previously with the ELB400, but it can be a little trickier to set up. (At least I didn’t look like a butcher last time!). The lights of choice tend to be speedlights, because they can be placed close enough, so the required low power setting for the shortest light duration is still sufficient to light the subject. I decided I would use the new Elinchrom ELB500, as it is far more powerful than speedlights, allowing me to place the heads further away, and also use grids without having to use too high a power setting.

The Miops Splash is wholly controlled by the Miops Mobile App. And like all the other interfaces for their triggers, it’s actually very intuitive to use. 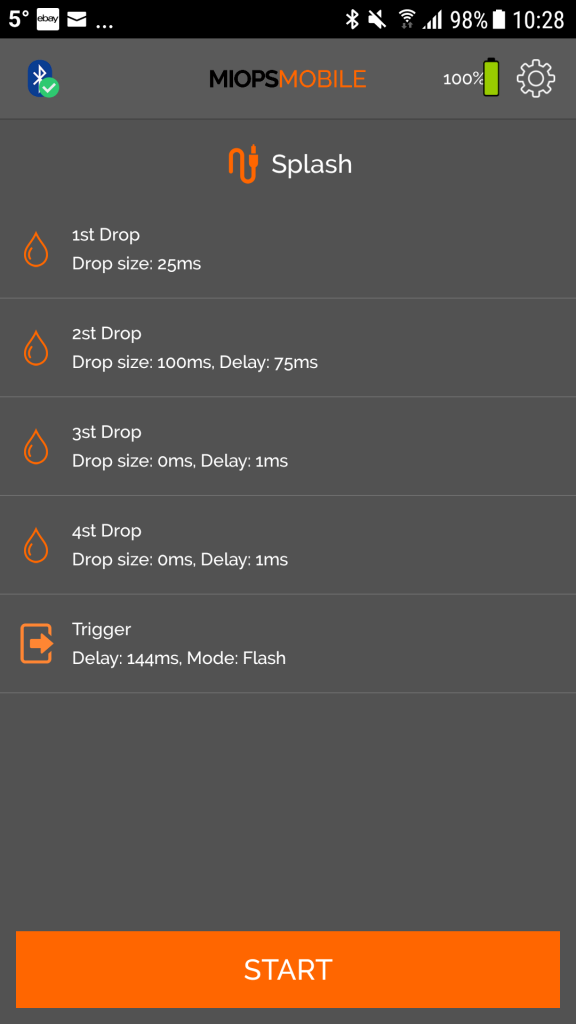 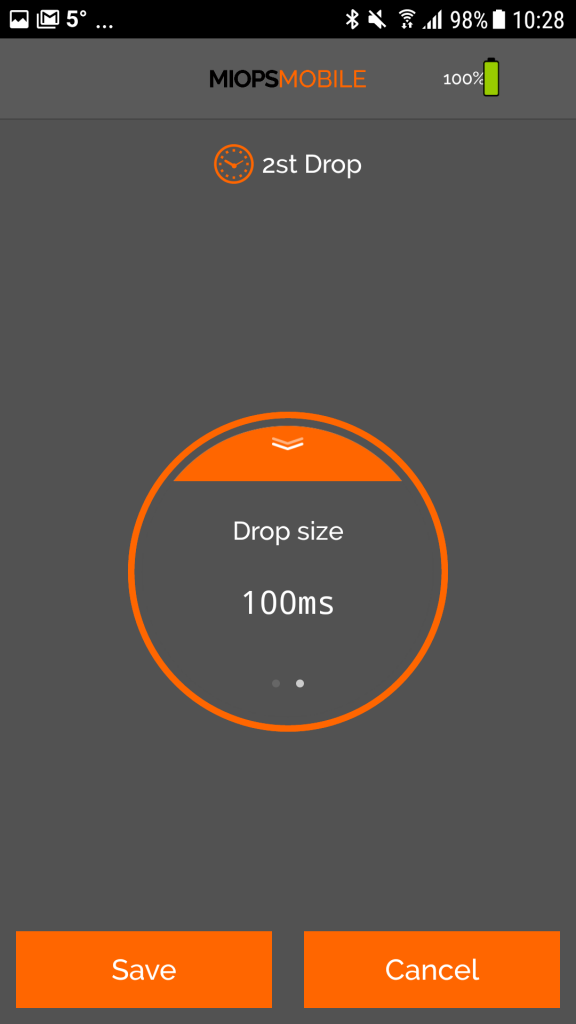 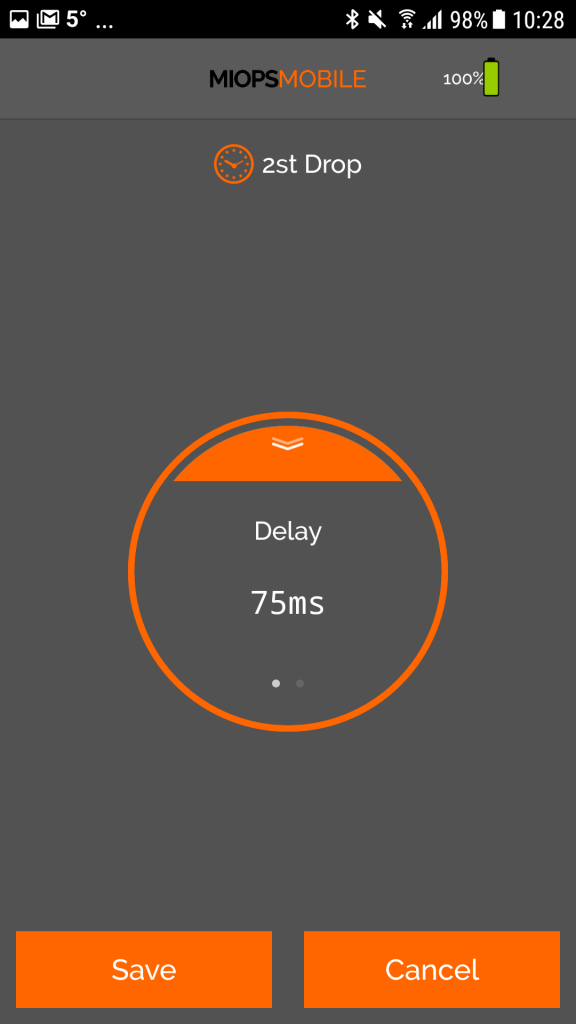 At this point, I’m going to pause a moment.

Bear in mind, I’ve not had any previous experience creating water collision images before, so this was all new territory to me. I therefore spent several hours trying numerous values and getting increasingly frustrated.

These are a few of the images from that first attempt, and you will note there isn’t a single collision image. 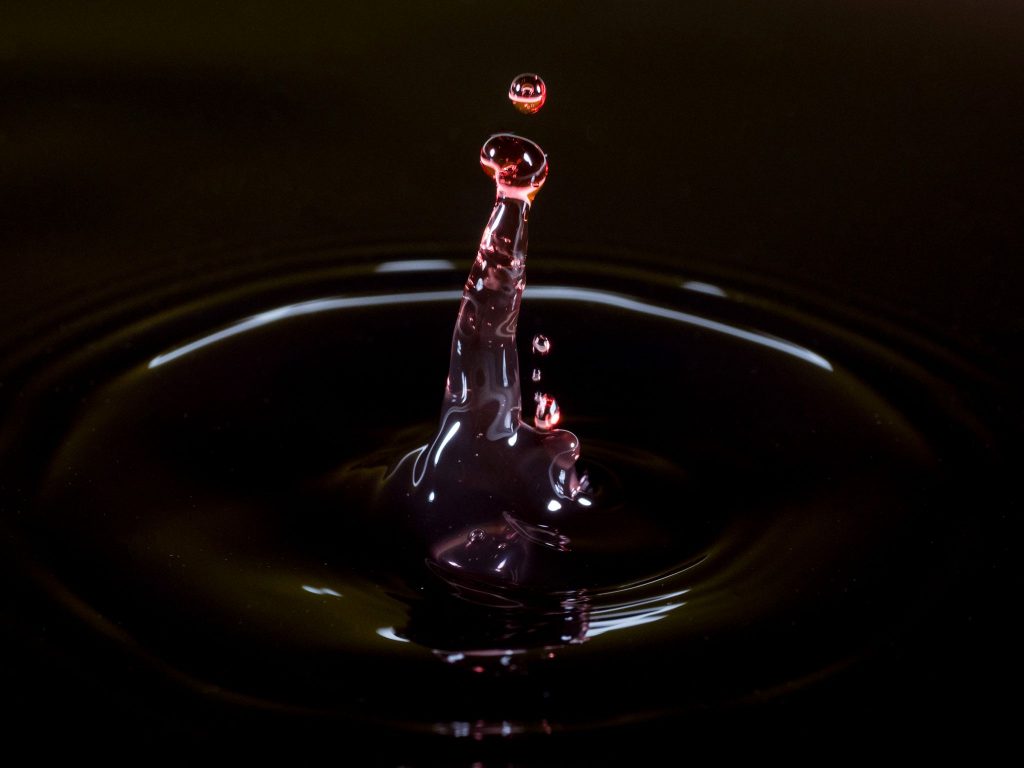 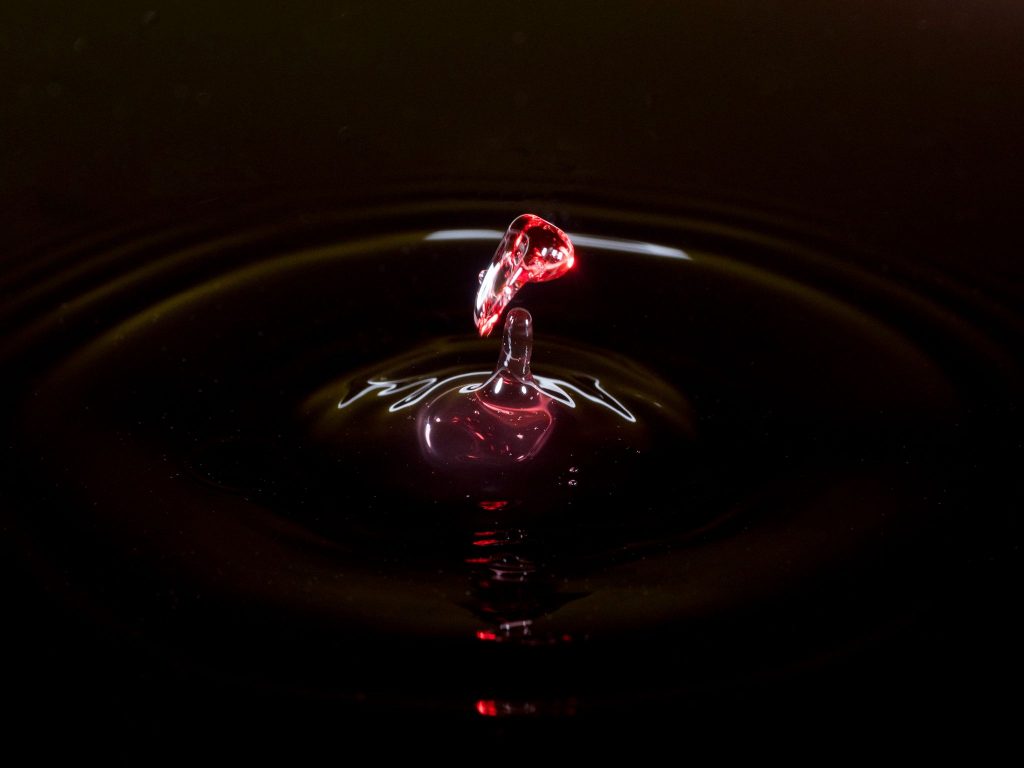 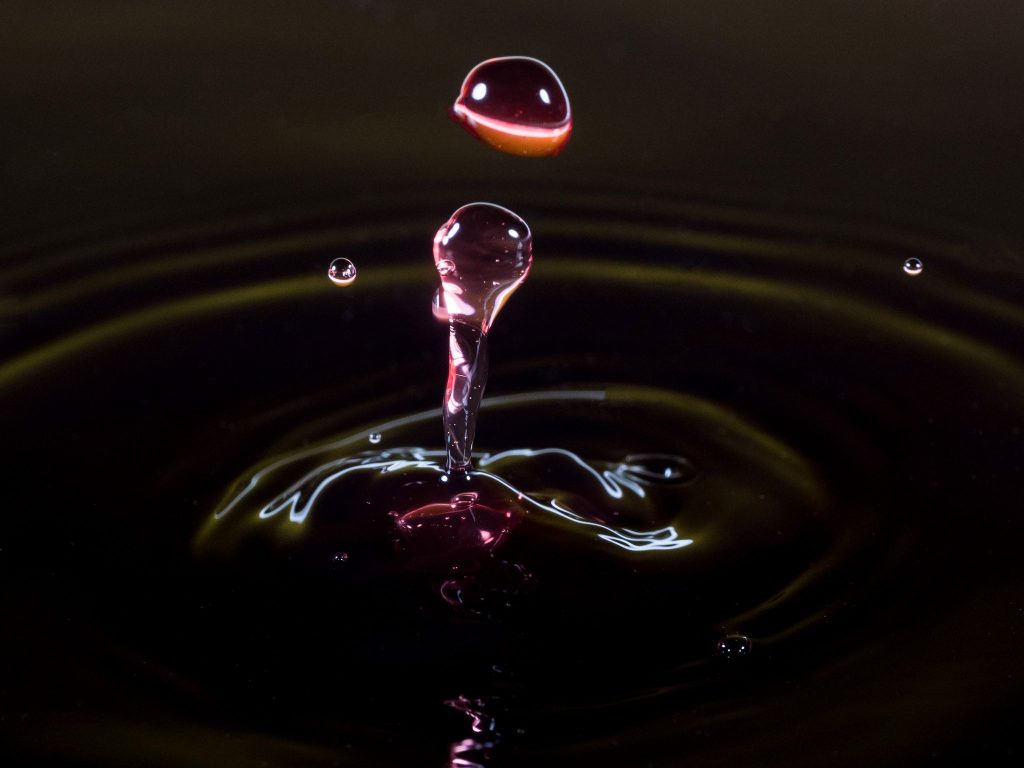 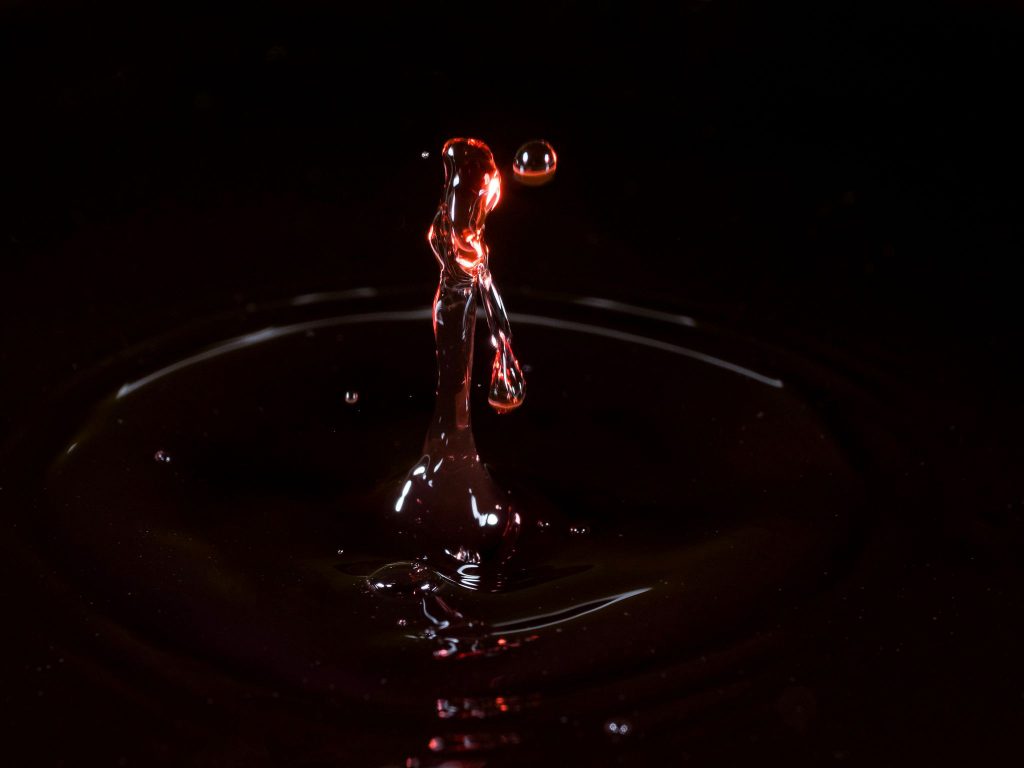 I was very disappointed, to say the least. Below are the BTS images, showing the setup. 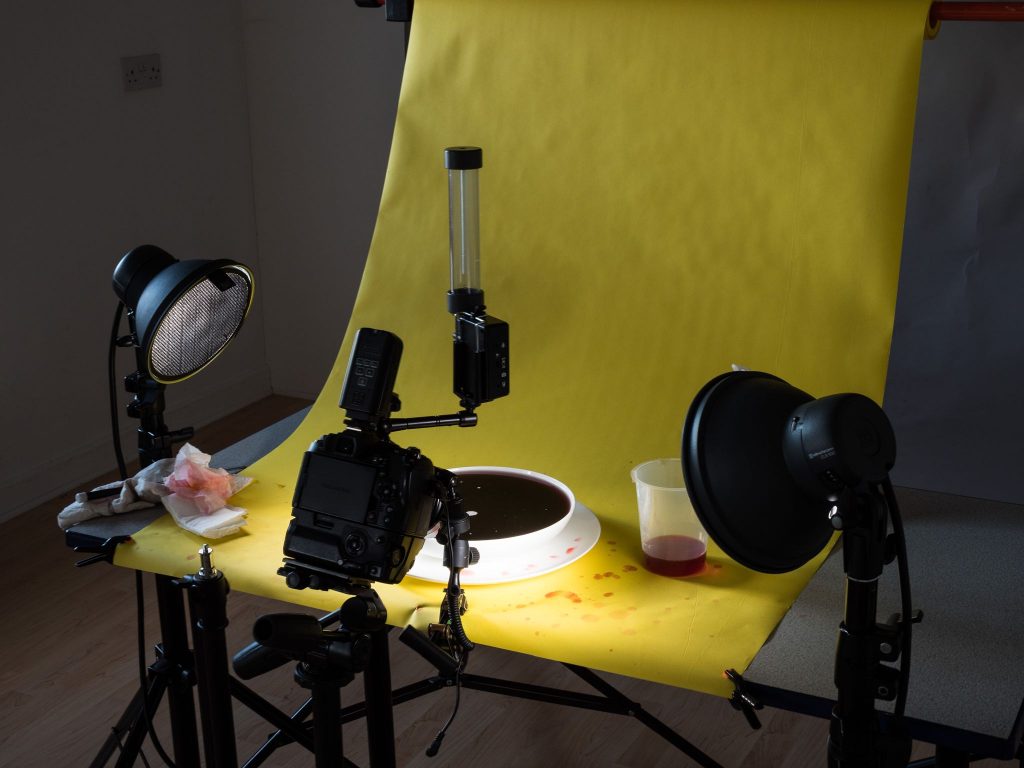 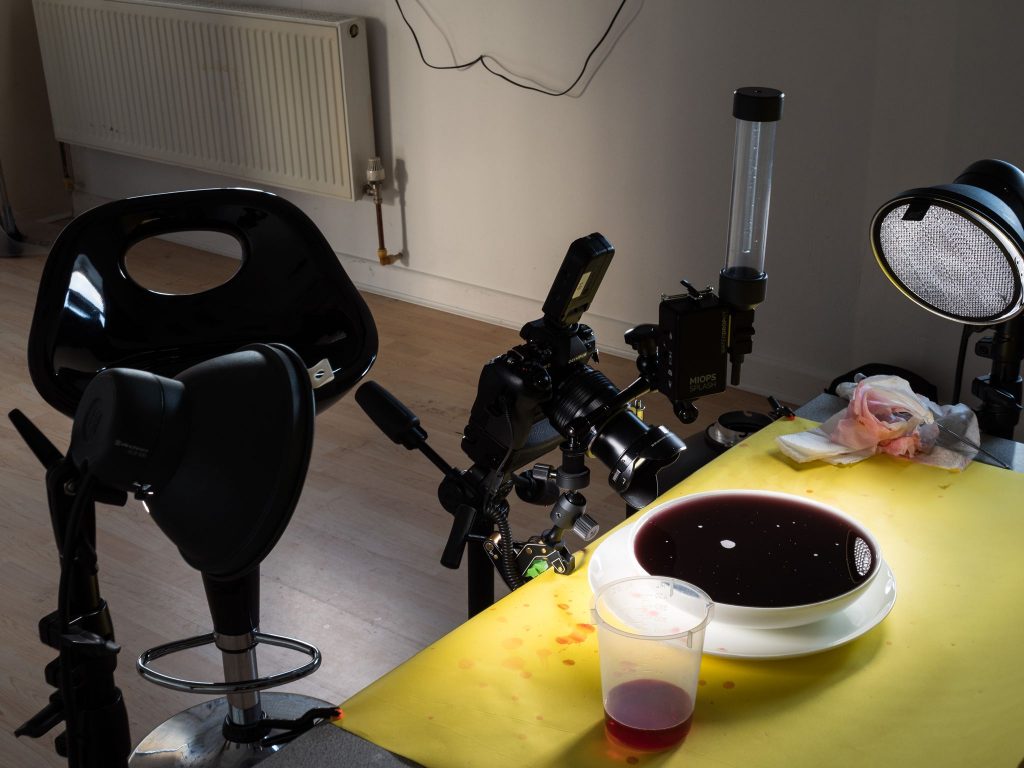 Later that evening, I carefully ran through my preparation and the way I had set up the Miops Splash. Had I missed anything? What about the way I had added values to the drop settings. Was the drop calculation as hard as I seemed to make it?

The following day, I went back to the studio and started again. I didn’t use the food colouring this time, as I wanted the images to be visually different, and therefore easily distinguishable from the first session. I set up the camera and lights exactly the same as the day before, but with added gels to give a bit of colour. This time I chose to use the flash and camera triggering option, where the Miops Splash triggers the camera in bulb mode, then fires the flash before allowing the camera shutter to close.

The dish was filled with clear water, as was the Miops Splash reservoir, and the cap was very, very gently pushed home, with only a small dribble from the vent this time, rather than the fountain I had the day before! I then secured the Miops Splash in place, but paid very careful attention to make sure it was absolutely vertical. I believe the day before, the Miops Splash had possibly been leaning a little. I’m not sure if this would effect the performance or not, but I wanted to rule out any variables. I also vented the system several times, as it seemed to occasionally dribble the day before, rather than just allowing a drop to fall. I had put this down to a possible bubble of air in the delivery spout.

I noticed I was getting very specific drops, a much cleaner release than the day before. However, the camera didn’t always open in time for the flash to fire. I don’t think this was an issue with the Miops, but rather with the cable I was using, as it had an extension piece. I switched to manually using a remote release for the camera, which meant I opened the shutter, stabbed at my phone screen to activate the Miops Splash, and once the flash fired, I closed the shutter.

I paid more attention to when the drop was actually captured, and started off with a single drop, changing the flash delay until I was happy with the column of water I was getting each time. Great! I was getting repeatable results.

I then added the second drop, with a delay, and suddenly got pretty much empty frames. What on earth had I done? That was when I suddenly realised, the addition of the drop size and delay, was pushing back my flash triggering time to such a point that it was all over by the time the flash fired. I roughly deducted the 2nd drop time and the delay time from the trigger delay, and all of a sudden, I had an “almost” collision. 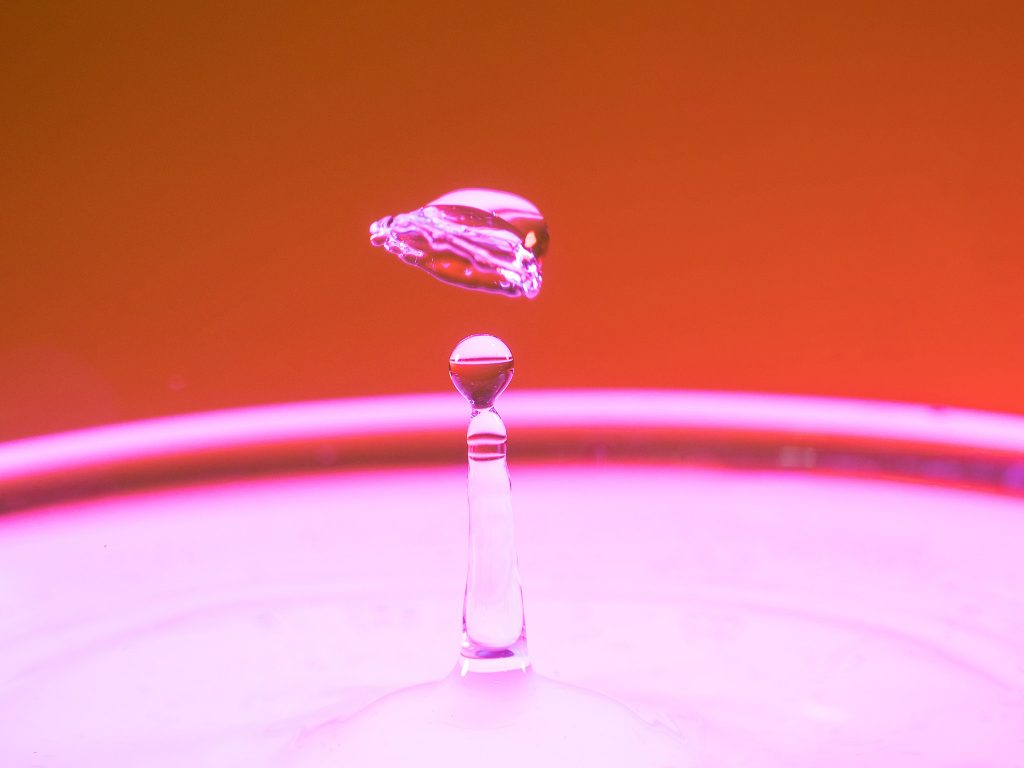 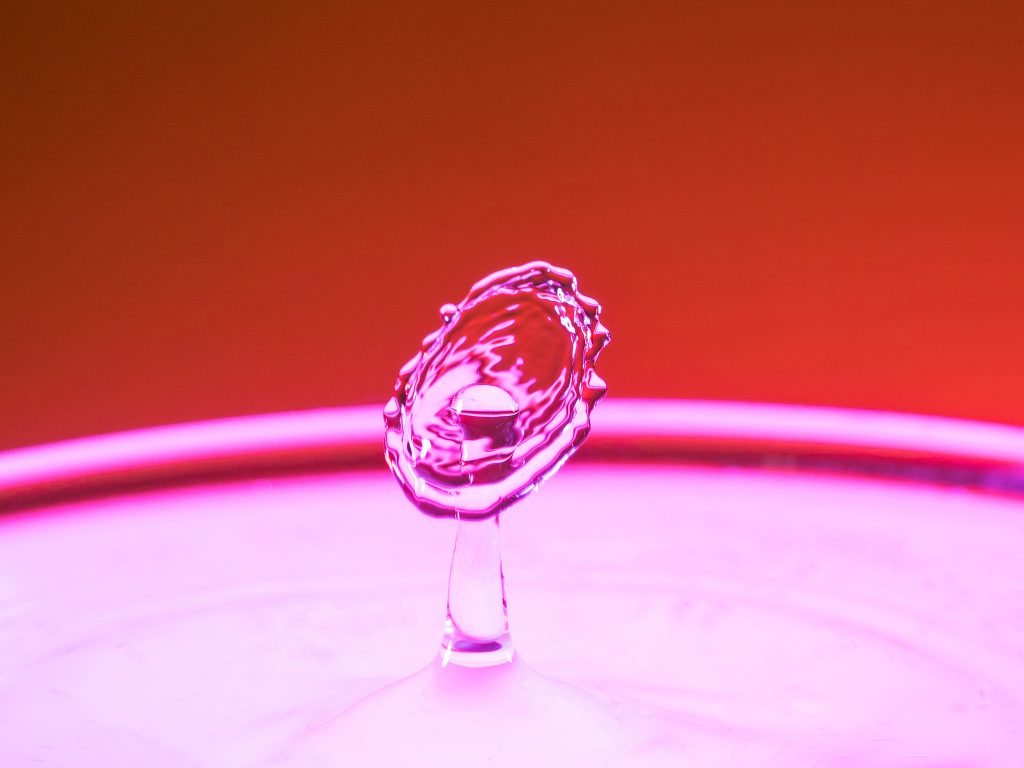 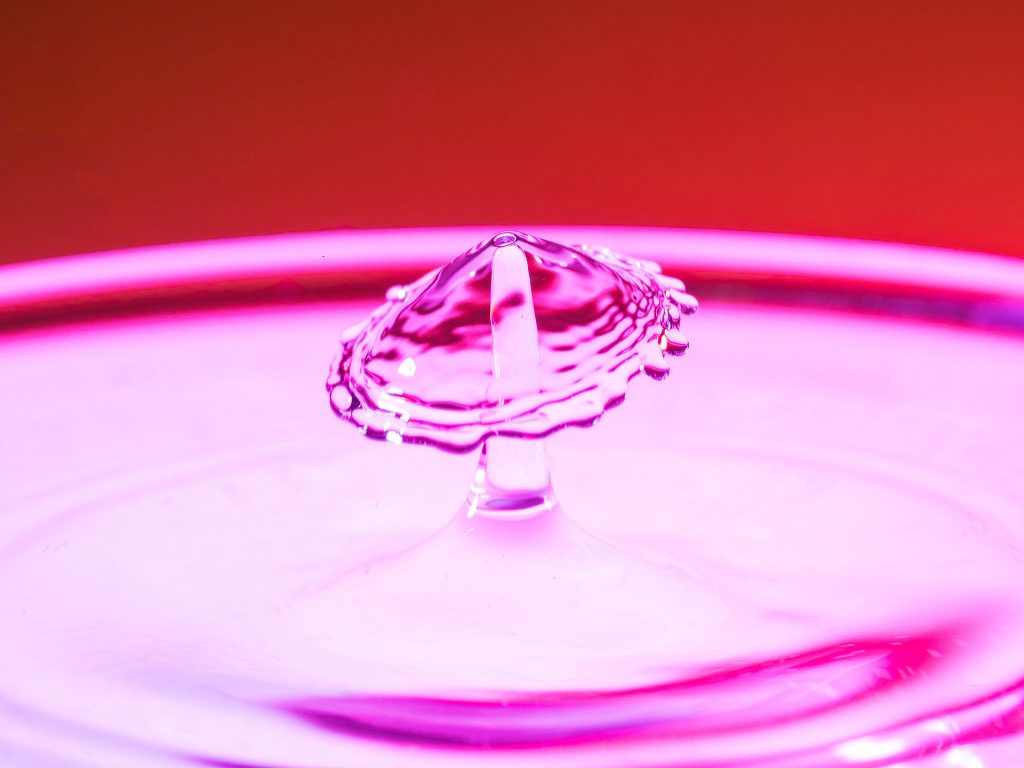 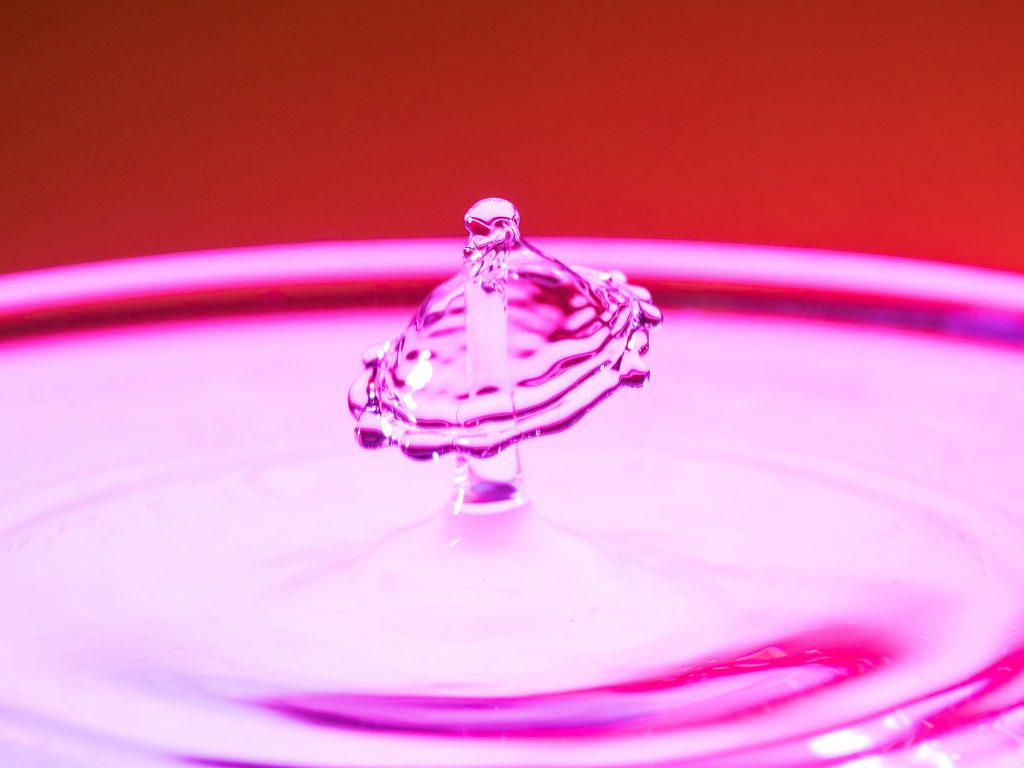 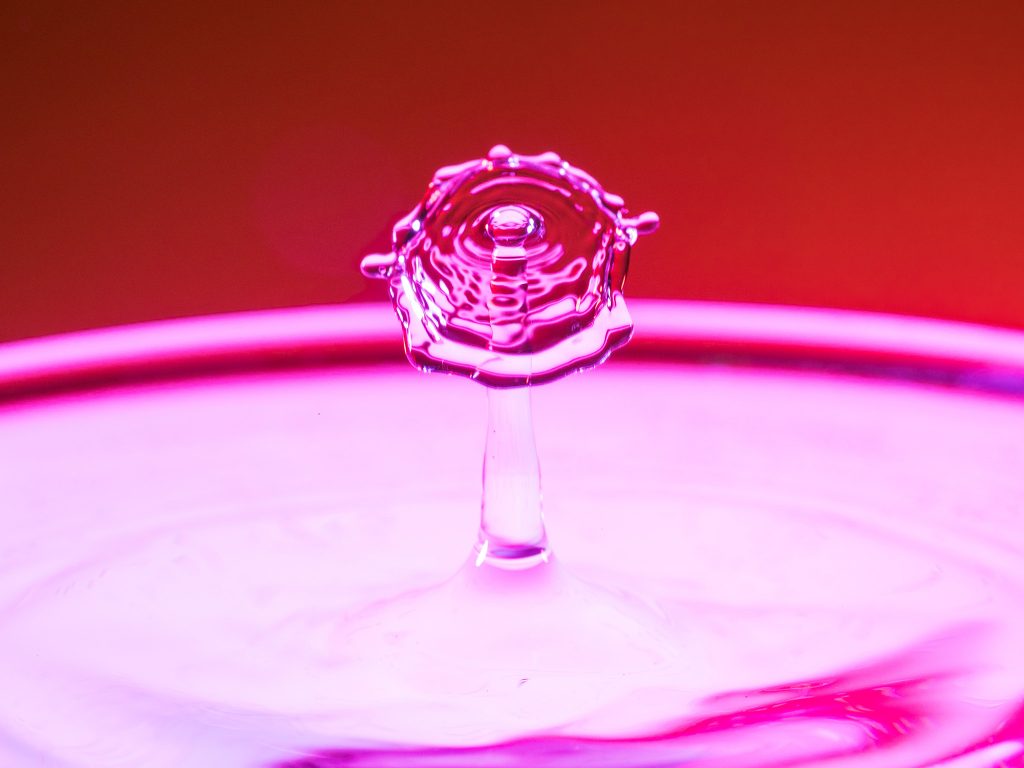 And having done it once, I know it’s repeatable. And the BTS images? 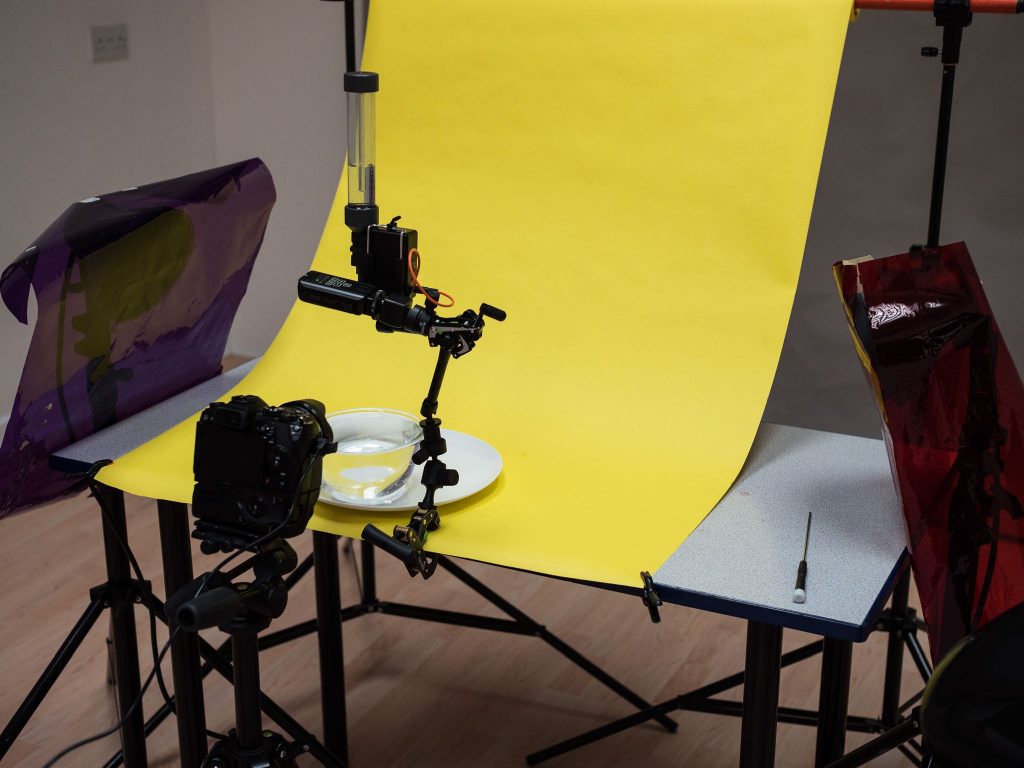 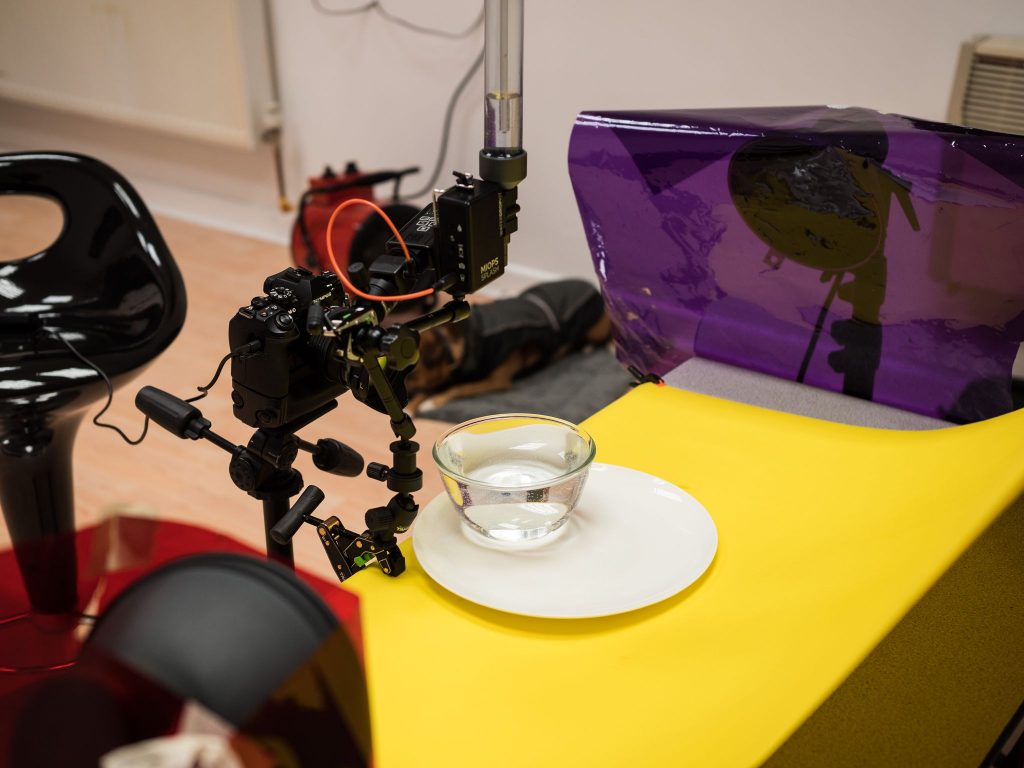 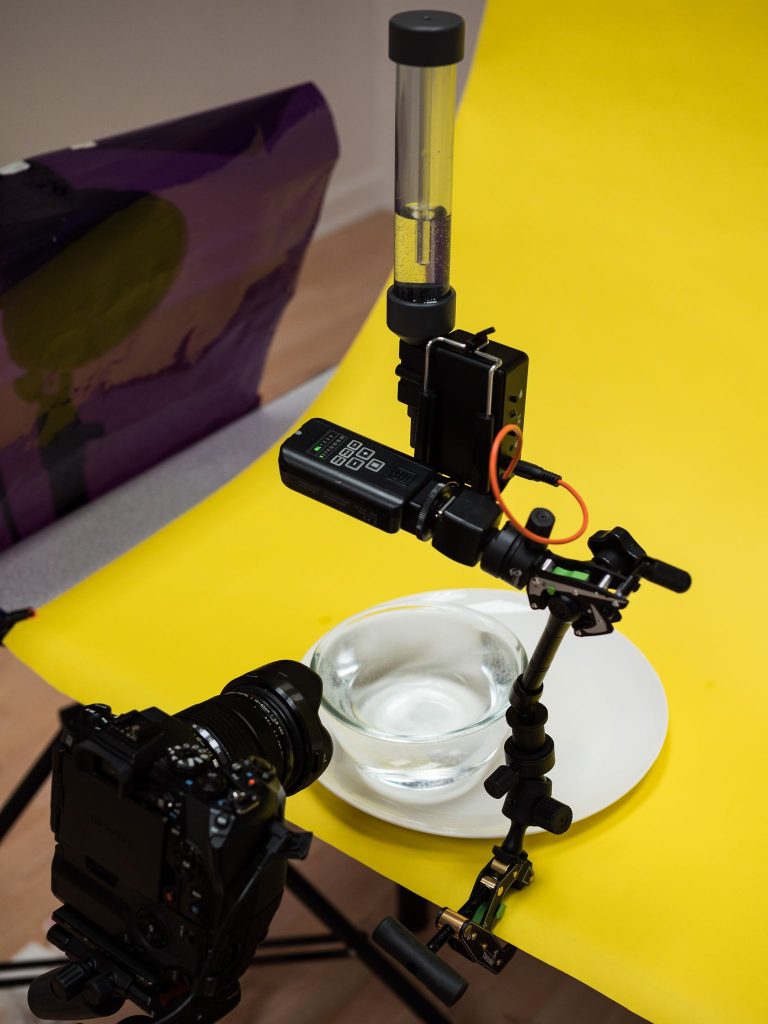 The settings used were:

I’ve mentioned before, this splash thingy isn’t my thing. I got the Miops Splash to try it, and found the first session very frustrating. The second session became a revelation, and I thoroughly enjoyed myself. If I had been more careful in my setting up for the first session, I would likely have gotten much further and a great deal quicker.

Oh, and that thing about not having any clients it could be suitable for? I sent one of the images to Damien, who immediately said “We could use that for some food stuff. You know, like coffee.”

Well, well, well. Who’da thunk it. It looks like my Miops Splash has been an investment after all.

It was much, much easier to set up and configure the second time, and by far quicker to get the required results once I had the epiphany regarding the timings. The kit itself is extremely well built, and excellent value for money, especially when bought with the optional fixing arm which makes it far easier to position the Miops Splash.

If you’ve ever done water collision photography before, you will likely take to this a lot quicker than I did. If you’ve never done it, expect to spend some time experimenting, but you will get the results you are after, and you will be able to repeat them.

I hate to admit it, but as I write this, I started to wonder what a three drop collision might look like. Or four drops, for that matter. Hmmmm. I’m going to make a bit of time to find out.

The UK distributor is UK Highland Photography. If you can’t find a distributor in your own country, you can buy direct from miops.com