Elinchrom ELB 400 And High Speed Photography With The Miops Trigger 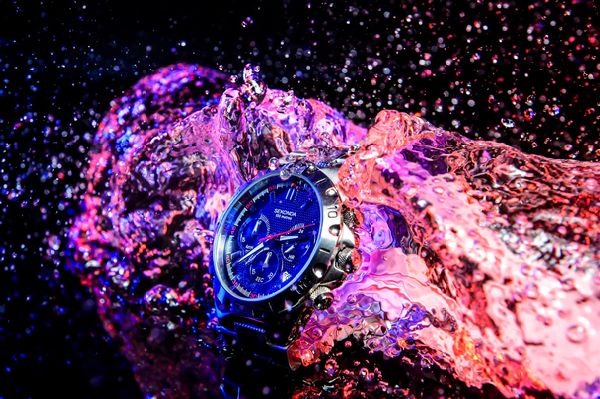 There’s a basic rule of thumb when shooting high speed imagery such as the above. IGBT rules. From speedlights to IGBT location lights and now IGBT studio lights, these are generally the weapon of choice when shooting the likes of water splashes, water wigs and suchlike.

I’m currently in the middle of a transition phase, moving from ‘S’ mount across to Elinchrom, and an IGBT option isn’t amongst their current lineup. I’d read a fair bit regarding their action heads, and I have seen some breathtaking images. But at the end of the day, I need to be confident I can create the images my clients need, and a bursting water balloon is certainly going to put the equipment to the test.

Talking of equipment, I’m using the Miops high speed trigger system which I have previously reviewed, to trigger the lighting rig.

I’m using four ELB 400 units, each with an action head. The fourth head was placed behind a lastolite diffusion panel and gel’d blue to give a bit of interest. However, I found the effect to be a little distracting from the main subject, the watch, and I switched it off. So I actually only used three heads for the image.

The watch had a long water filled balloon passed through the bracelet and then placed on a black glass panel. The main, or key light, was a 40cm beauty dish with grid, attached to the Quadra head via the EL adapter mkII. It was placed almost immediately alongside the camera and angled downward quite acutely. This provided the overall light, and being gridded, prevented unnecessary light hitting the diffusion panel. The head was plugged into the B port of the ELB 400 unit, and set to an output of 4.4 which is the maximum on the B port.

Now, as the ELB 400 are not IGBT based, I made the assumption that the shortest light duration would be at maximum power, which is typical of a non IGBT head. At full power, the light output peaks almost immediately, before tailing off. As the power is reduced, so the length of the tail is increased. This effectively increases the duration of light, and would therefore cause blurring of movement within the image. It’s often exhibited in child portraiture if the child is moving around the studio or waving their hands about. With this in mind, I knew I would have to have all the heads at a similar setting to avoid any blurring of the water.

A little further back from the watch and frame left, I placed the second ELB 400 unit, with the head connected to port B and an output of 4.4. The head was firing through a gridded 18cm reflector and gel’d blue.

The third ELB 400 unit was placed frame right and again further back than the watch. The head was also connected via the B port and output was again set to 4.4 and firing through a gridded 18cm reflector with a red gel.

As I previously mentioned, I initially set up a fourth ELB unit behind the diffusion panel, but switched it off after the initial test shots.

At this point, I took a few test shots, which basically allowed me to nail the exposure regarding the aperture and ISO, which was f11 at an ISO of 200. The test shots were taken at 1/125th sec, but this is actually irrelevant, as the technique I would use to trigger the flash would entail a long exposure and the flash being triggered by the sound of the balloon bursting.

To accomplish this, I placed the Miops trigger almost alongside the front of the lens, and set to sound mode. The Elinchrom Skyport transmitter was placed on top of a cell triggering cube, which also had a PC sync socket on the side, allowing me to connect the cube to the flash port on the Miops. The cube has a plastic foot which I slid into the hotshoe of the camera.

I then blacked out the studio. Incidentally, I chose to use our smallest studio as it would be far easier to create a blackout than in the others. I set the camera to a shutter speed of three seconds and did a test exposure to ensure it worked. Basically, I released the shutter, set the Miops to “ON” and then snapped my fingers to trigger the lights before the shutter closed. And I was good to go.

My first image had a flaw. Unfortunately, I hadn’t dialled in any delay on the trigger system, so the Miops triggered the lights the instant the balloon burst, which gave me an interesting image of the balloon only half disappearing, as seen below. 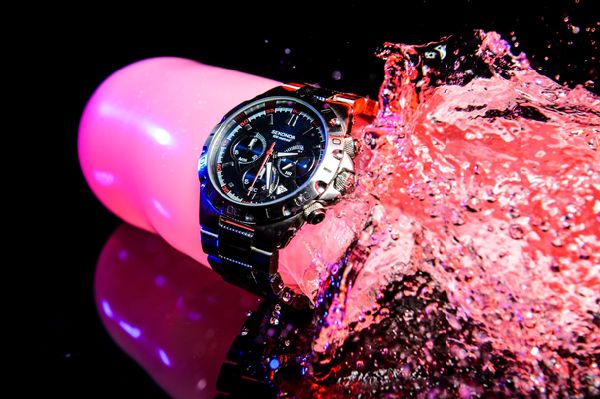 After drying the glass top and watch, I replaced the balloon and reset everything. I dialled in a delay of 5 milliseconds and tried again. The image at the top of the page is the second attempt, and has dismissed any kind of concern I may have had with regards to using the ELB 400 Action heads for high speed photography. They certainly work extremely well with the Miops. 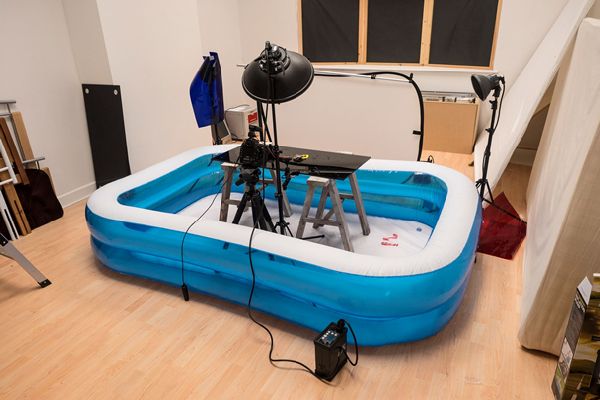 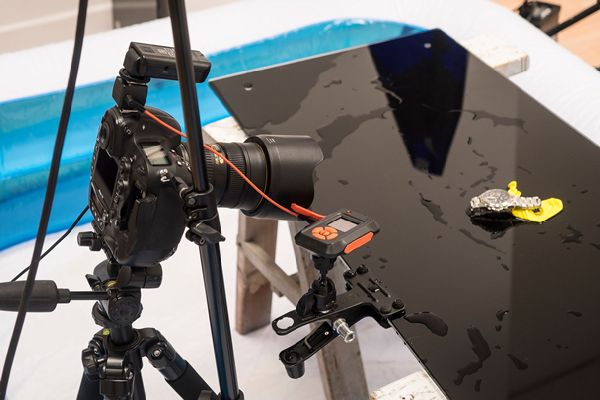 The Elinchrom ELB 400 units came from The Flash Centre