Portrait of a Violinist 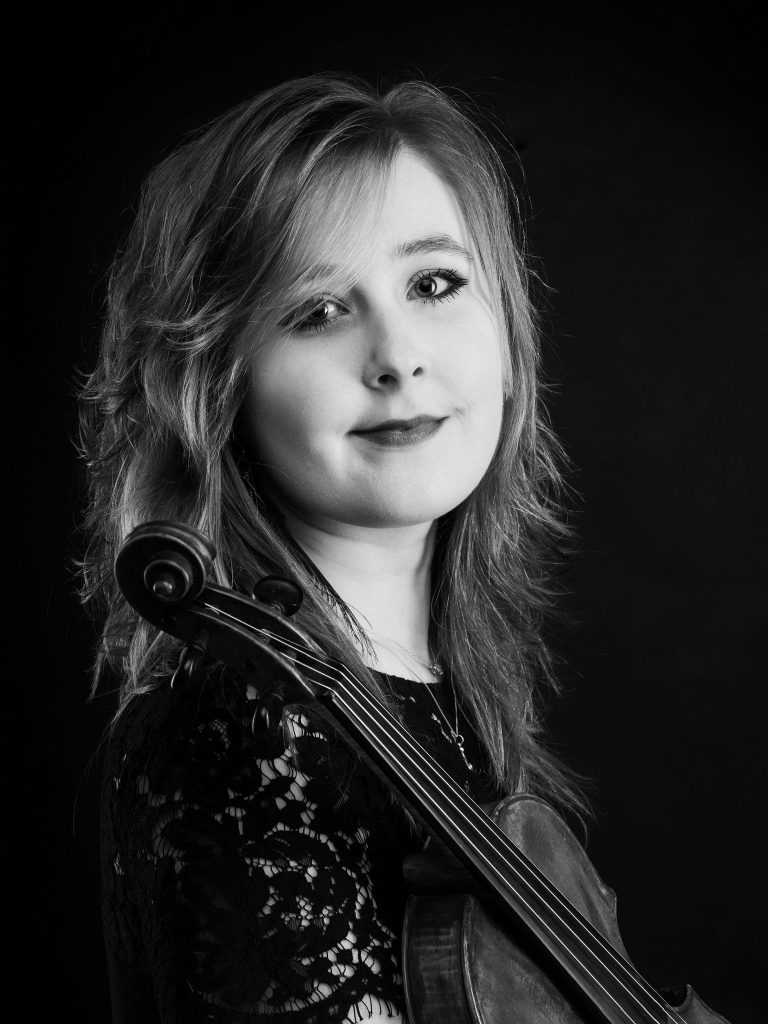 This was a rather nice shoot, and a bit of a reunion. Hannah is a violinist and tutor, and needed some imagery for her website which promotes her sessional work.
I say a reunion, because I had photographed Hannah and her boyfriend a good few years ago, when they were members of Montego Bay.

Hannah was quite emphatic about wanting black and white images, although I did supply all images in both black and white, and also in colour. The above is possibly my favourite from the shoot, as it puts more emphasis on Hannah, with her violin playing second fiddle. (Yes, I know, a terrible, terrible pun. So sue me!)

Lighting was extremely straight forward, with the aim of keeping any stray light off the background, ensuring it stayed black. All modifiers were honeycombed for this reason.

Starting frame left, I placed a 1200Ws Elinchrom studio head, wound down as far as it would go, which is an output of 2.5 (Equivalent to 38Ws). This was firing through a honeycombed 30x140cm stripbox, and was providing the accent light seen in Hannah’s hair.

Frame right, I placed an Elinchrom BRX500, again firing at an output of 2.5 (Equivalent to 38Ws), through another honeycombed 30x140cm stripbox. The provided the light across her hair and also across the violin.

A third light, a 300Ws head firing through a honeycombed 150cm Octa, was placed to my immediate right, and raised as high as possible and angled down towards Hannah. Output was set to 1/8th, (Equivalent to about 22Ws). 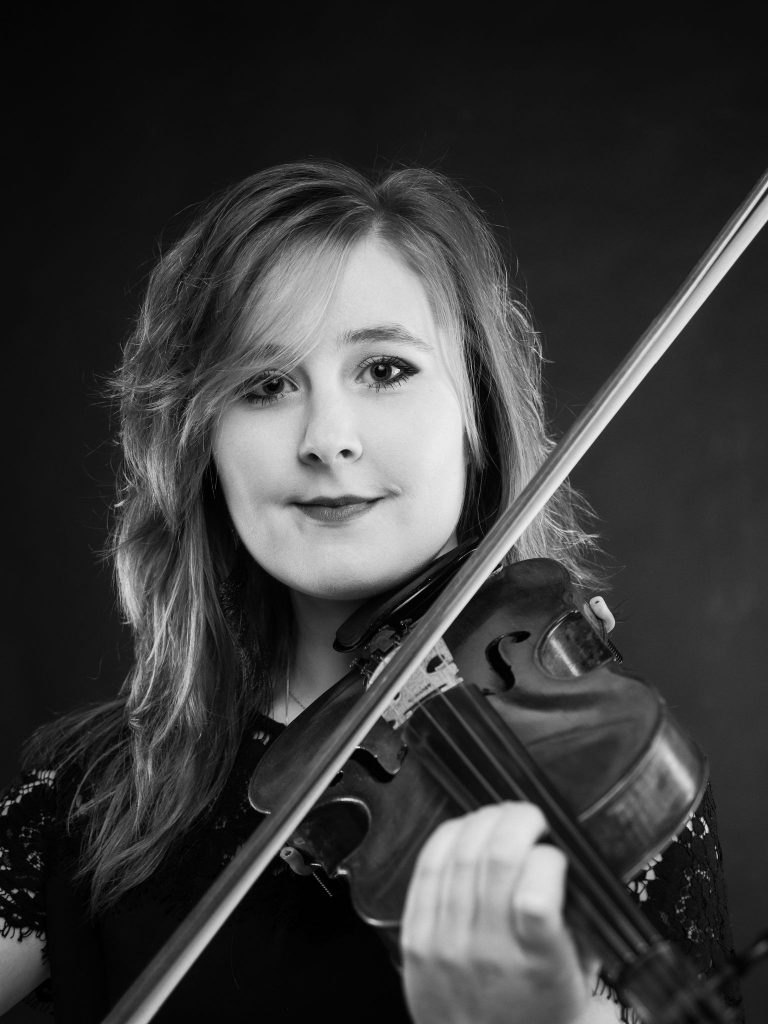 Here, I was careful to pay attention to the composition. I wanted the bo to go from corner to corner, and the scroll to lead the eye to Hannah.

The accent lights are still pretty much in the same position, although Hannah is ever so slightly nearer to me for this one. Also, the key light is immediately behind me and on axis, to ensure the highlights are central and at the top of her eye. As Hannah has come forward a little, I opened the aperture by a third of a stop to f6.3. 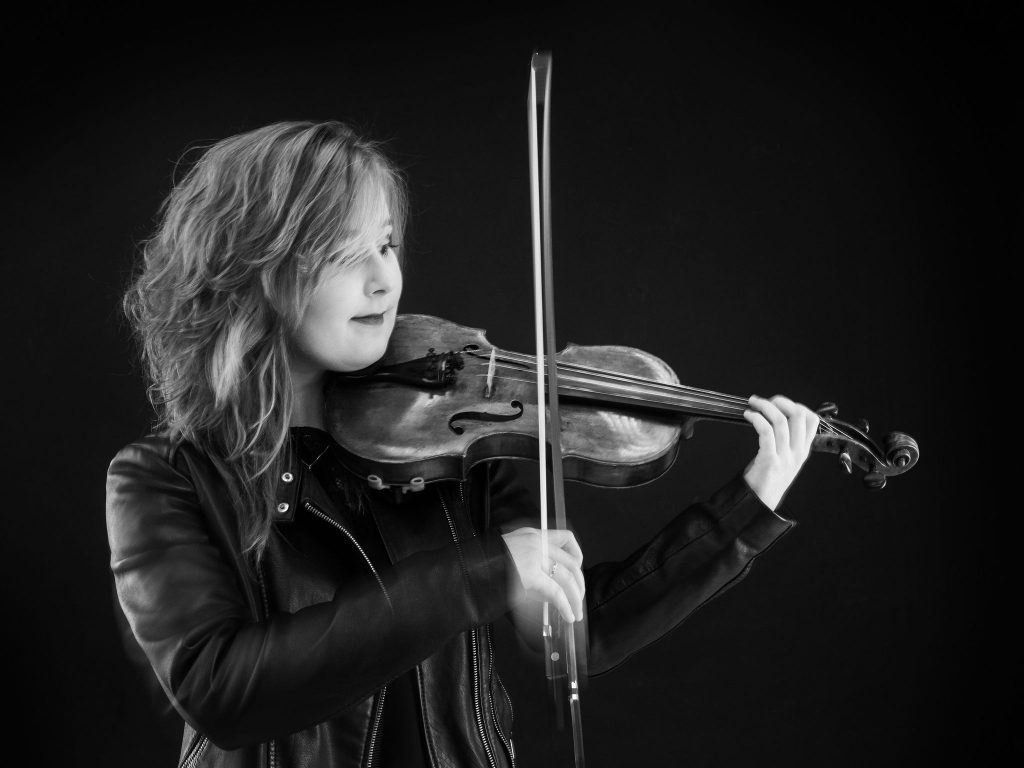 I wanted to capture some of the movement in Hannah’s playing, and it was easily done by slowing the shutter speed for a longer exposure, with the ambient light allowing the blur from the movement of her hand and bow, before the flash fired to make the final exposure.

Exactly the same lighting setup and position as the first image, but with the shutter speed greatly slowed. 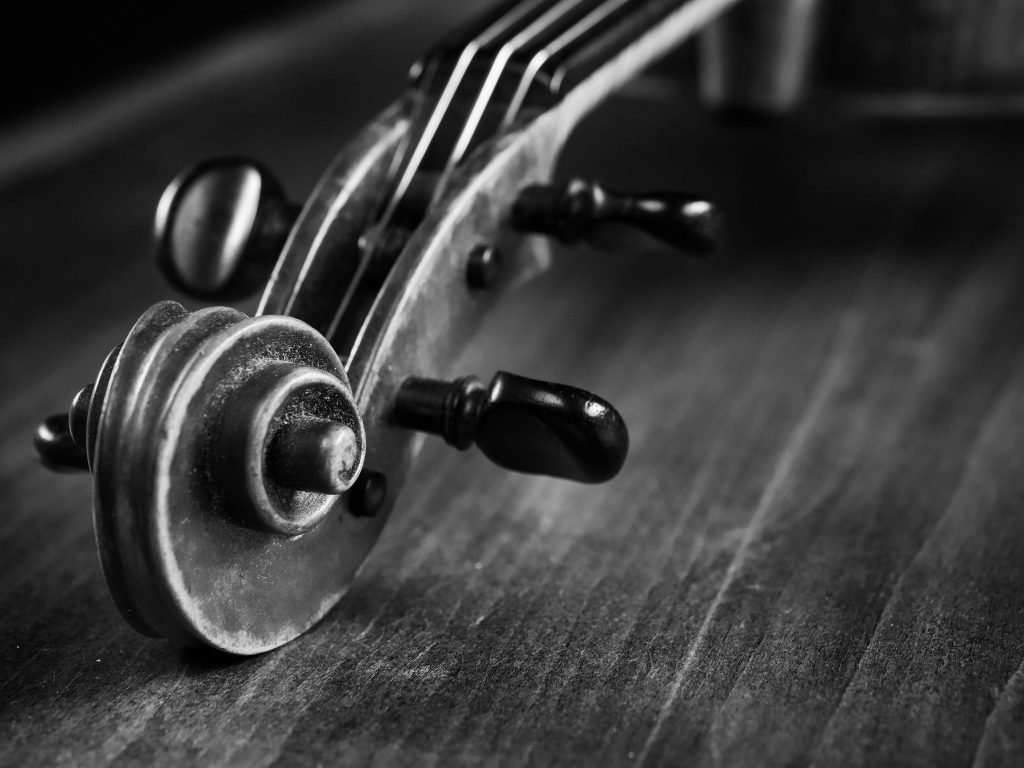 The violin was laid on a coffee table, due to the similar colour of the wood. Plus, it meant I didn’t have to lie on the floor. An ELB400 and action head firing through a 90×90 folding softbox, was place frame left. A second ELB400 firing an action head through a 80x80cm folding softbox was placed frame right. Both were firing at an output of 2.0 (Equivalent to 25Ws). 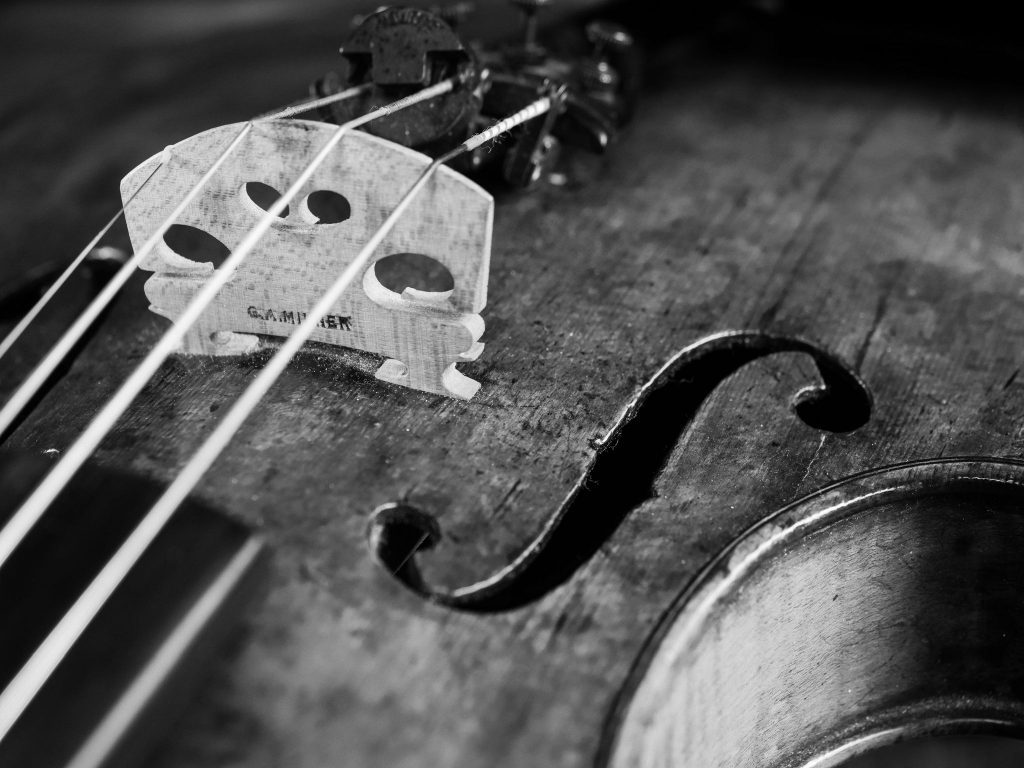 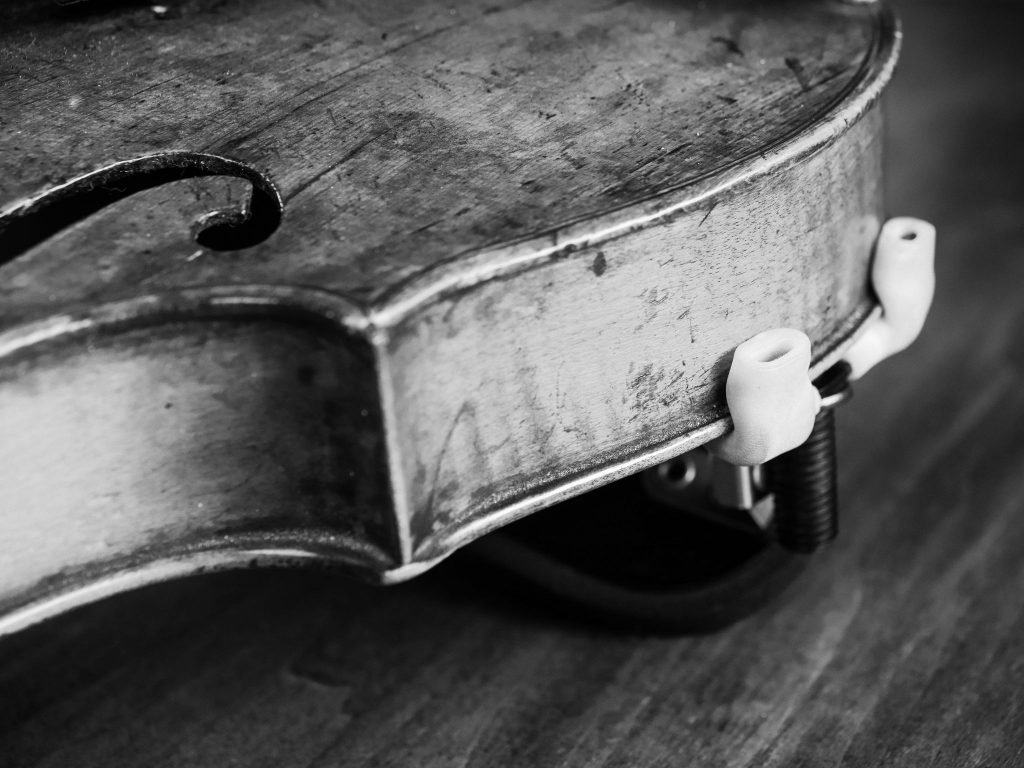 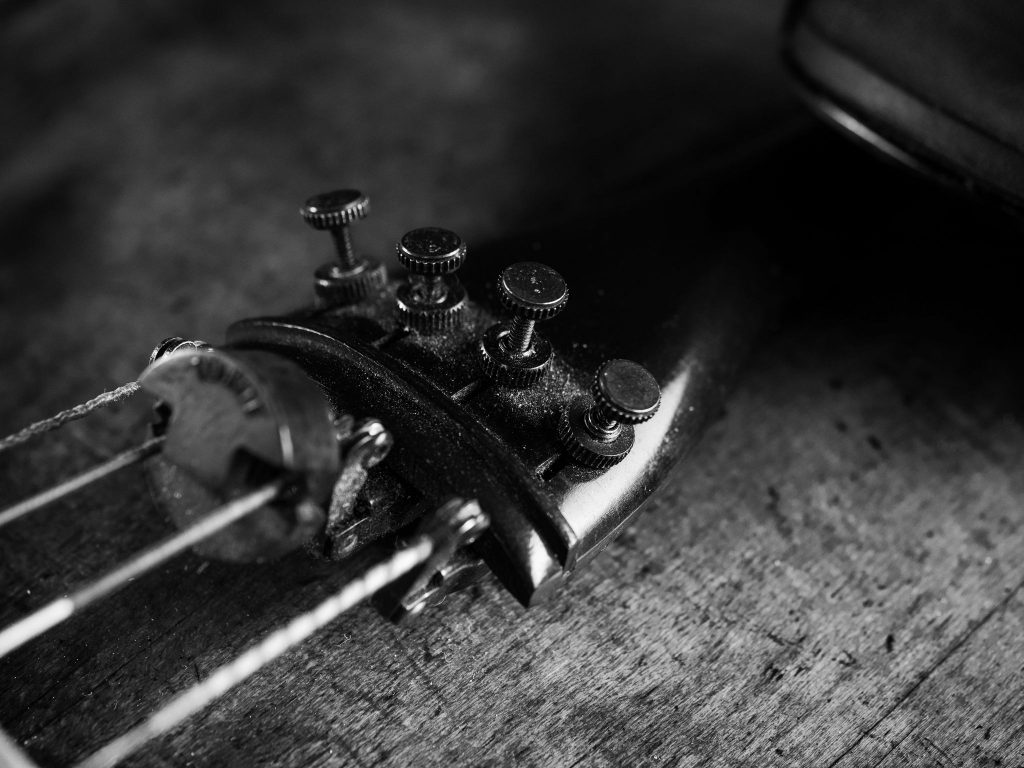 All detail images had identical lighting and camera settings. The violin and lights remained in the same position, and I simply moved around the violin for these images.