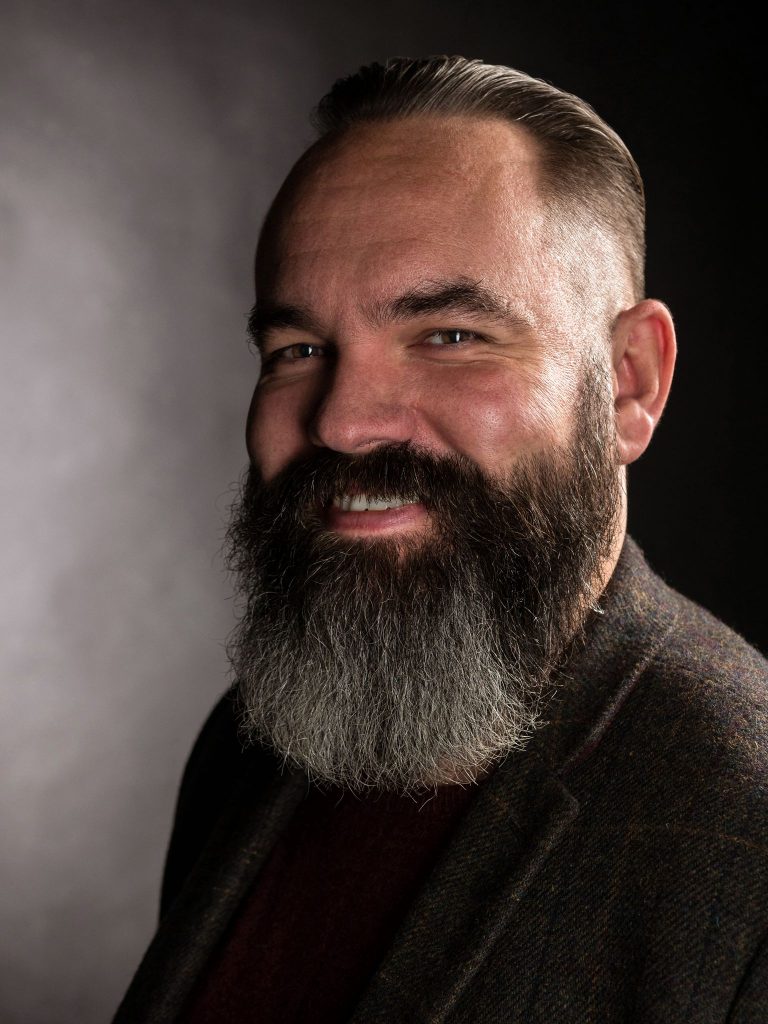 Meet Damien McGlade, photographer and a long time friend. Although he did scare the hell out of me when I first met him. But that’s another story.

Anyway, Damien has just revised his website, and realised his mugshot was out of date. A visit to the studio for a coffee and ten minutes of torture in front of the camera was in order.

Incidentally, have you noticed how anyone who works behind a camera, absolutely loathes being in front of it? Well, apart from Hazel Riddle, but she’s bonkers anyway.

This is actually a simple three light setup, creating a Chiaroscuro lighting scenario. Starting with the background, I placed an Elinchrom ELB400 frame left, firing through a honeycombed 30x140cm stripbox at an output of 2.0 (Equivalent to 25Ws). It was almost straight on to the backdrop, and carefully angled so the drop off happened in line with Damien.

A second ELB400 was placed frame right, and positioned beyond Damien. It was angledto create the accent light you can see along the side of head and shoulder. It was high enough and angled slightly down to create the hair light too. It was firing through another 30x140cm honeycombed stripbox at an output of 2.0 (Equivalent to 25Ws).

My keylight is a third ELB400 to my immediate frame right, firing through an 80x80cm folding softbox just above head height and angled downward. This too, was honeycombed to help control the light path. Output was at 1.5 (Equivalent to 18Ws).

Of course, within a couple of weeks of this headshot, Damien trimmed his beard right back, so his headshot is out of date.

Damien can be found at http://krakenphotographic.com/

Just out of interest, go to his site and see if he’s changed his mugshot again.