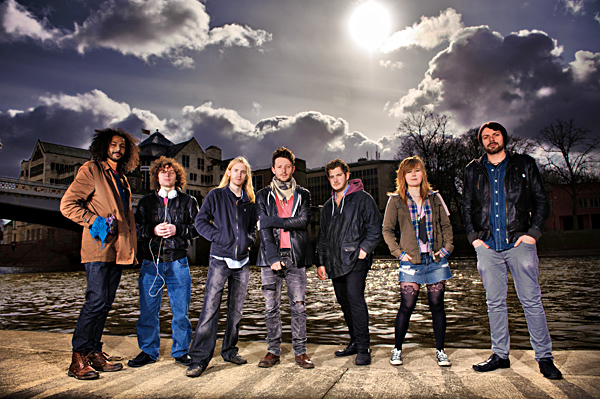 Montego Bay. The most amiable bunch of folks I’ve had the pleasure of spending time with in quite a while. A little off the wall, and all very different, and all so very, very talented. I first met them in October 2012 when I photographed the Captive Music live final, held in Preston’s 53 Degrees club. I’m not a fan of live music. It’s loud! However, I can no longer say I hate all live music. The night turned out to be full of surprises, not least the fact a enjoyed the whole thing, and especially Montego Bay’s performance. Apparently, you’re never too old to learn new tricks.

Anyway, what’s a music contest got to do with the above image? Well, as part of the prize for winning the competition, the band would get a shoot with yours truly. So off I trundle to York to meet the group.

The above image was almost at the end of the shoot, at 1430hrs. I wanted a moody look to the image, and the bright sunshine would certainly create interest. I wanted to drop the ambient as much as possible, and then create enough light to make the group pop against the background. I used five bare speedlights, no modifiers. For one reason, I needed as much light as possible, and secondly, the way the speedlights were to be spread out, they would act as fill lights for each other. 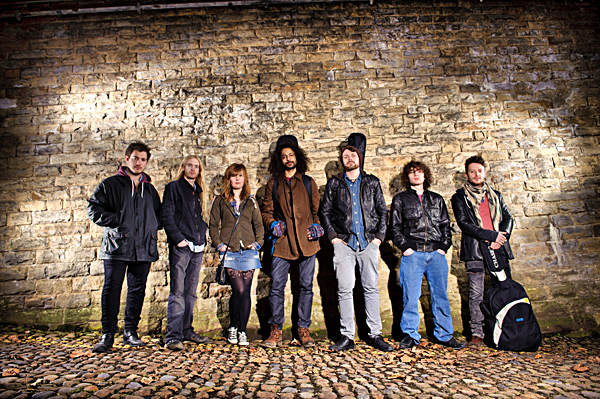 Last shot of the day, taken about twenty minutes after the top image. It had become a little more overcast, so dropping the ambient was much easier, which was a boon as the lights actually needed to be further away from the group for this. Similar sort of set up insofar as there were two speedlights at each side, one high and the second about elbow height. You can see the light path on the wall. Again, there was a single central speedlight which was immediate camera right, as can be seen by the shadowing behind the group members. The vignette effect isn’t added in post, it’s the natural light fall off due to the dropped ambient.

You can follow their antics on facebook. I’m sure they’ll have a website sorted soon, and in the mean time, you can hear their music here.

The whole shoot thing was recorded for posterity by Captive North. Not sure how much it will cost me to have them lose the thing, but they can be found here.

These are the sort of images I provide for promotional brochures for my clients, whether corporate, bands or anything else you can think of  :o)

Damn, they published the ruddy video!