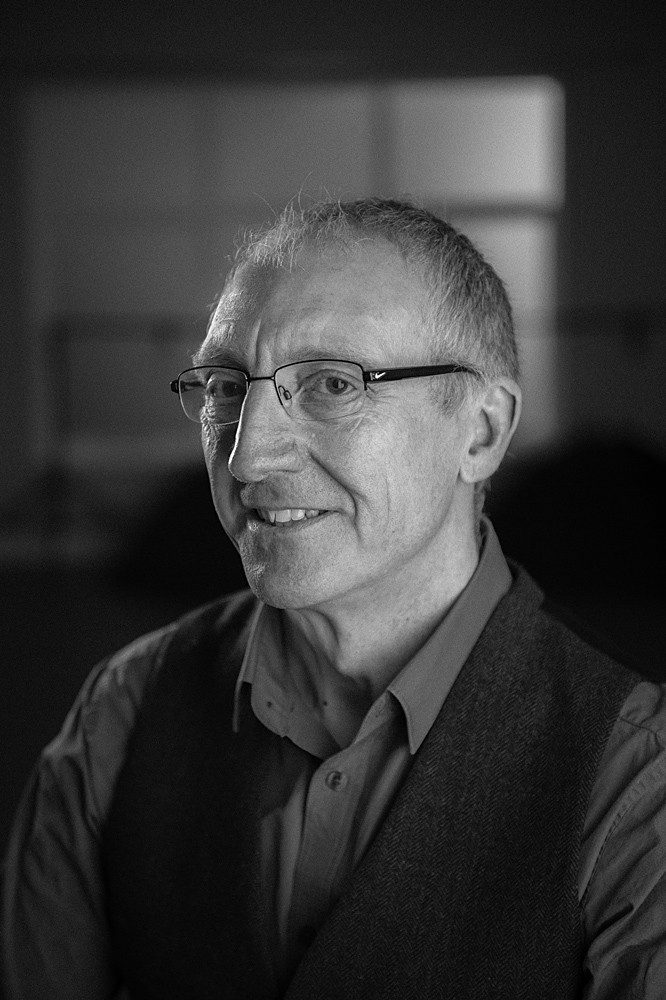 The technique demonstrated is “short lighting”, where an accent light is used on the far side of the subject’s face, which then has a slimming effect to their features. This wasn’t a portrait session, but a quick demonstration example, shot during a mentoring session.

Although shot in the studio with studio heads, this is easily reproduced with the most rudimentary of speedlights. In fact the studio heads were the most basic available, deliberately chosen to demonstrate good results are not dependant on expensive equipment.

The accent light is a 200Ws head, firing at ¼ output through a cheap 60×60 softbox frame left, and just beyond the distance of the subject. It needed to be at a ¼ output due to the distance between the light head and the subject being greater than the usual “just outside the frame”, to reduce any chance of flare from the softbox.

The main light is camera right, again just above head height. This is another 200Ws studio head, firing through a 70×100 softbox which was rotated to an upright position. The intention was to imitate a window like catchlight in our subject’s eye. Again, the position of the light is almost in line with his shoulder, allowing the light to skim across his left shoulder, once again providing texture and shape to his shirt and waistcoat.

The main light was much closer, at a distance of around three feet, which meant the power was at 1/16, and also ensured the light was very soft on this side, compared with the harsher falloff on the far side of his face.

It’s basically a two light setup, in a cross lit configuration. Both heads are facing each other.

The output of the two heads is so low, they can be replaced with speedlights easily.
The accent light would be swapped for a speedlight at ½ power, firing into a silver reflective umbrella, and marginally nearer the subject. The silver lined umbrella would provide a more contrasting light, although slightly softer due to the umbrella size, if around 33cm.

The main light would be swapped for a speedlight at ¼ output, firing through a shoot through umbrella. This would produce a similarly soft light as the 70x100cm softbox, but you would get a circular highlight in the subjects eye. One method of counteracting this cheaply, would be to mask the umbrella to produce a rectangular highlight.

Things to bear in mind:

All the lighting equipment required for the budget version can be bought for less than half the cost of one cheap 200Ws studio head. (Unless you’re married, and lied to your wife about how much you paid for your studio heads. I hope she doesn’t read this!).