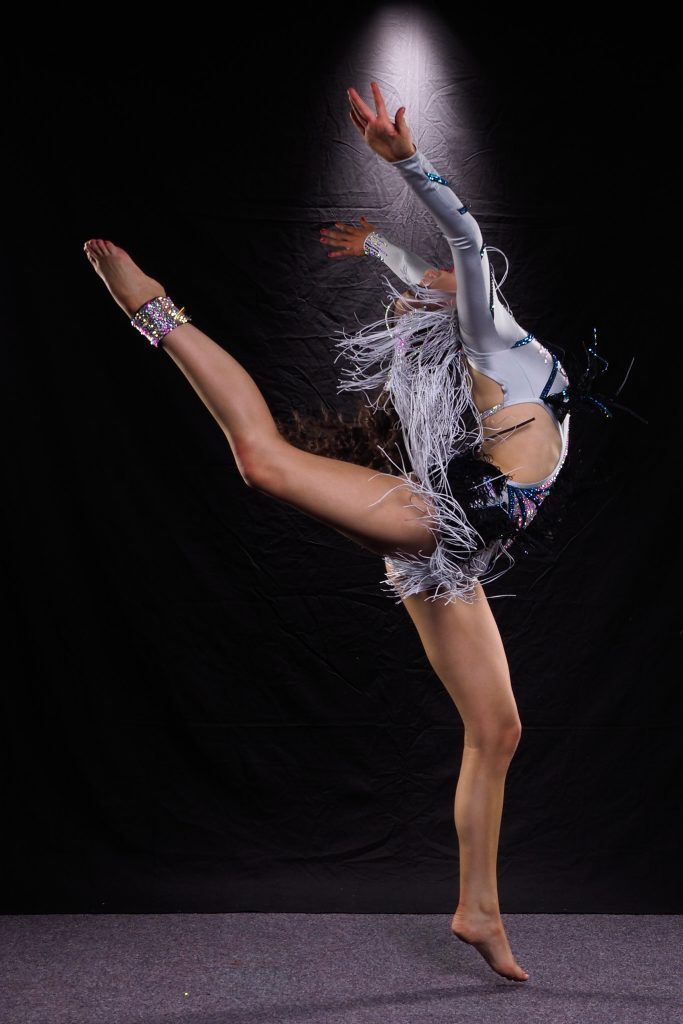 Whilst the above image may well look like a studio shot, it’s actually one from a competition event held at Blackpool Winter Gardens. This was the Europeans annual competition, and I was there with Helen, of Helen Rose Photography.

I tend to set up my events as if it is a studio environment, complete with accents and keys. I know most event togs prefer a fairly flat look, with a couple of keys and no accents. I always tend to see that as a missed opportunity. It may well take a little longer to set up, and require a little more equipment, but the images tend to have more depth and are more appealing.

For the above, I used a total of four lights. I had two accents, one key and a spot. The spot was nothing more than theatrical. It didn’t contribute to the lighting of our subject in any way, other than to appear as a spotlight by spilling down the backdrop.

Seeing as we have mentioned the spot, I may as well start with that one. An Elinchrom ELB500 head was clamped to the background support bar, firing through a 20° grid. It was angled downward and towards the base of the backdrop, ensuring the light path would clearly show. The output was set to 3.0 (Equivalent to 50Ws). This basically overlit the black cloth, causing it to appear white, therefore looking like the path of a spotlight, aimed towards the subject.

Frame left was the first of our accent lights. This was another ELB500 at about head height and angled slightly down, firing through a 30x140cm honeycombed stripbox. The honeycomb tightens up the path of the light, and helps prevent flaring. It was placed barely forward of the backdrop, and the result is the very fine accent along our subjects lower right leg (the one in the air!). The accent is so fine, it could be termed a rim light. The output was set to 4.0 (Equivalent to 100Ws).

I had a second accent light placed frame right. Again, it was only just forward of the backdrop, providing quite a sharp accent along our subject’s left thigh etc. This was another ELB500, at head height and firing though another 30x140cm honeycombed stripbox. The output was also set to 4.0 (Equivalent to 100Ws).

Finally, we come to the key light. This was a fourth ELB500, firing through a 120cm Lastolite EZBox with a honeycomb fitted. It was at maximum height on the light stand at around eight feet, mainly to avoid passing folk! It was angled down towards our subject, which meant there would be no light contamination of our background. The output was set to 3.0 (Equivalent to 50Ws).

Helen can be found at helenrosephotography.co.uk

The Elinchrom lights came from The Flash Centre, and the Olympus equipment came from Cambrian Photography