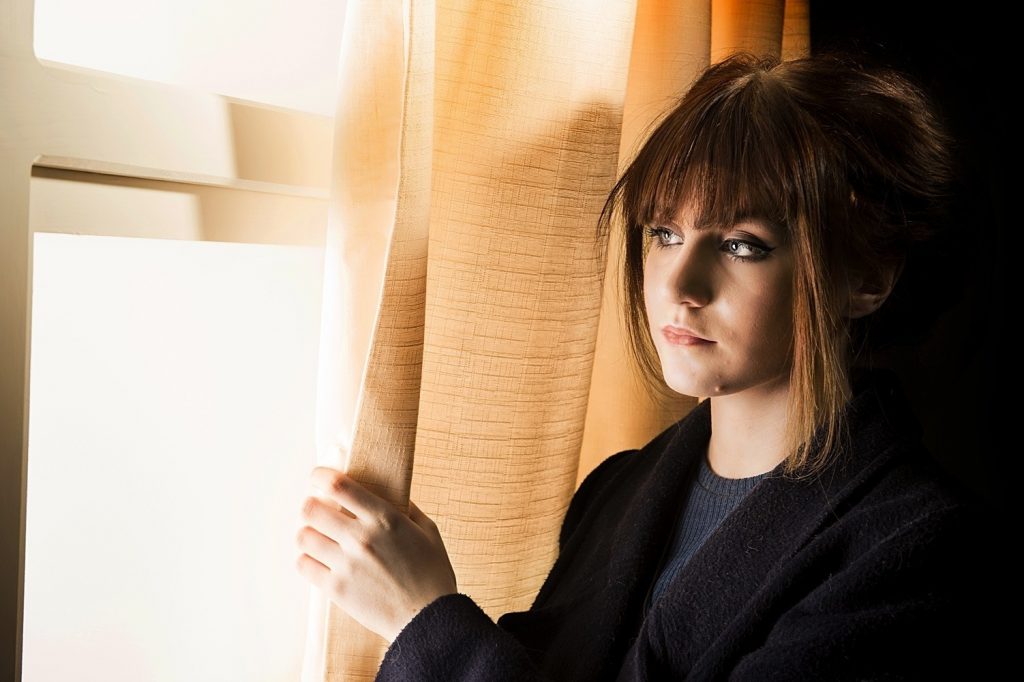 This was from a lighting course I ran a little while ago. The intention is to recreate a window light and infer a little drama.
It’s actually taken in one of our room sets at the studio, and normally you would simply see the corridor beyond the window. So, with that in mind, let’s start with the window light.

What you can see through the window is a large white Styrofoam board, or “flat”. It’s used to reflect the light from a stripbox towards the window. Using the flat causes the light to be even, and means we didn’t have to use the biggest softboxes of 6’x4′, which would have been cumbersome in the corridor.

The stripbox was 2m tall by 15cm wide, nicely lighting the flat, which was stood upright at a 45-degree angle to the wall. This ensured that any of the window within the framed shot would be lit by the light, and would ultimately light our model accordingly.

I’m not worried about the overexposure on our models fingers along the edge of the curtain. The most important factor was to ensure the models face was lit correctly.

Frame right is a fill light, ensuring our model’s left cheek didn’t go to black. I used a 300Ws studio head mated to a 70x100cm softbox and placed about four feet away from her with an output of 1/16th

If you look to our model’s hair, you can see a touch of highlight, basically stopping the back of her head from disappearing into the dark room. It was another 300Ws studio head, firing at ¼ through a gridded standard reflector. It was placed on a stand at a height of around seven feet and angled down towards our model.

I’ve just noticed the extra splash of light on the curtain, which clearly comes from our hair light. Bad form! As I should have noticed this, and either switched to a snoot or changed the angle of the head so it didn’t hit the curtain to the same degree.

Very simple to recreate, but do watch for errant patches of light… ahem!