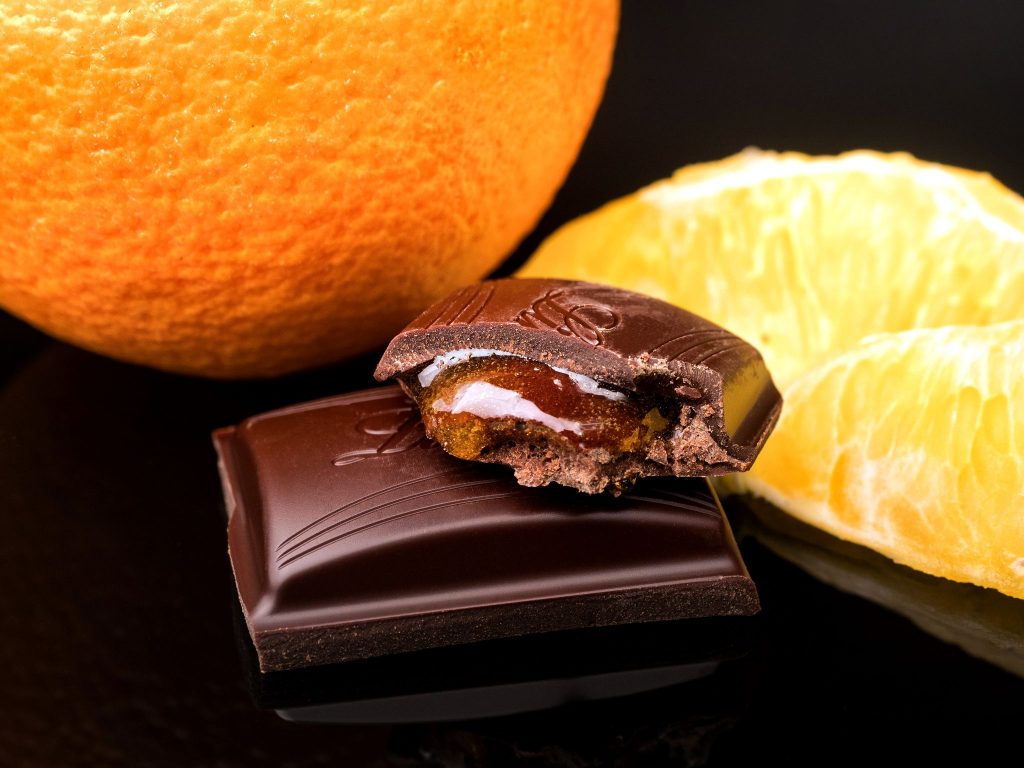 Chocolate. The one thing I have a hard time resisting when I’m photographing food. And this is particularly good chocolate, I have to say.
Besides, if I didn’t eat at least some of it, my wife would grab the lot, never to be seen again!

So, starting with a brand new block of Lindt chocolate with orange, I broke off two pieces, placing one on a highly polished black glass surface. I broke the second piece in half and placed one half on top of the first place. Don’t worry about the remaining half piece, I took good care of it.

Then a whole orange was placed at the back, along with a singe orange segment. These were nothing more than visual indicators of the centre flavour.

Moving onto the lighting. Frame left, and right up against the table is an ELB400 firing at 2.0 through a 90×90 Lastolite Ezybox. This was angled slightly downward so as to play across the surface of the orange, and provide a specular highlight to the visible orange centre of the broken piece on top. It would create shadows into any of the depressions, although not highly contrasted due to the size of the modifier.

Frame right, I decided to use a reflector to bring light back in the shadows on the opposite side of the chocolate and orange. I chose to use a silver reflector to aid the contrast I mentioned above. This helped keep the colour of the chocolate quite dark. It’s all too easy to allow chocolate to become the pale brown we often see, when light is reflected by the oil within the chocolate.

This is likely the most simplest of lighting setups for food, although I wouldn’t recommend it as a “do all” solution, because it definitely isn’t. However, it particularly suited this image and subject.

A better “average” lighting setup for food photography can be found at “Feeding the Eyes!”

I provide photography training, such as food photography, via Focal Point.