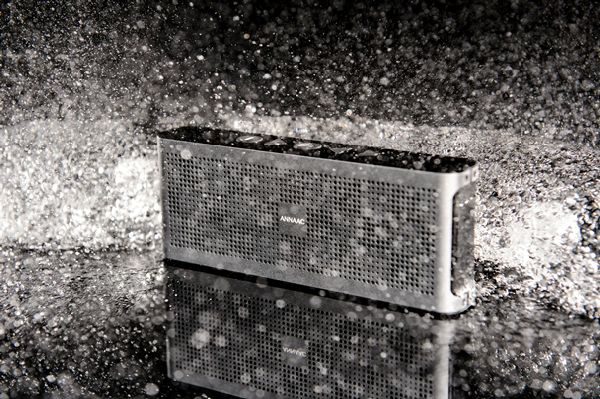 I’m in the process of moving across to Elinchrom, and one of the areas of my work that looked like it may throw up a challenge or two is high speed photography. Water splashes against products and that sort of thing. There’s a basic rule of thumb when shooting high speed imagery such as the above. IGBT rules!. From speedlights to IGBT location lights and now IGBT studio lights, these are generally the weapon of choice when shooting the likes of water splashes, water wigs and suchlike. Elinchrom do not provide an IGBT option, as they employ a Voltage controlled system.

I have previously used the ELB 400 Action heads in a client shoot with a watch and water, and I was more than satisfied with the result. However, this soon got me thinking about the possibility of utilising the HS (Hi Sync) heads which would allow me to make use of the camera’s maximum shutter speed of 1/8000th sec, therefore freezing the motion with the shutter speed, rather than the duration of the flash, which is the case when using the action heads of the ELB 400, or indeed with IGBT systems. Seeing as I needed to demonstrate the waterproof tendency of the Annaac bluetooth speaker, I felt this was an ideal opportunity.

The HS heads have a flash tube that is visually quite different from the Action heads. The tube is much thinner and it produces a noticeably longer light duration. When I previously did the shoot with the action heads, one of the first things that struck me was the fact I was able to use a lower ISO and greater aperture, as I had so much more light available to me compared to the IGBT systems I had previously used. Of course, I shouldn’t really have been that surprised, as IGBT cuts the light output as it’s turned down, and thereby shortens the flash duration. The drawback with IGBT is the fact you then have a very low output which usually means having to use a higher ISO and/or a wider aperture to get an acceptable exposure. If shooting smaller objects where you can have the light sources quite close, then this can counteract the reduced light output. The difficulty comes when using IGBT lights outdoors for a full length portrait and you have the potential for the light source to be in the frame.

When I had used the action heads, I was aware the best output for the shortest flash duration was at maximum output through the B port, and any adjustment in light level would have to be catered for by changing the proximity of the heads. The technique needed for the HS heads is different insofar as I would have full adjustment of the light output available to me, and I can use maximum power if needed.

I placed the key light immediate camera left and at a height of about five feet. I used an ELB 400 HS head firing at an output of 5.0 through a 44cm gridded beauty dish angled down toward the subject (a bluetooth speaker).

There was a second ELB 400 HS head firing through a 20 degree gridded 18cm reflector frame left and further back than the subject. It was only just above the height of the speaker and firing at 4.0.

A third ELB 400 HS head fired through a 20 degree gridded 18cm reflector frame right and a similar distance and height as the above. The output was also set to 4.0

The above accent lights were to provide some accent and backlighting to the water.

A fourth accent light, which was to create the texture across the front of the speaker with an additional lift to the rubber on the side, was placed frame right at a height of four feet. This was a fourth ELB 400 HS head, firing through a 30 degree gridded 18cm reflector, and an output of 4.5

The maximum output of each unit is 6.0, which left me with a fair bit of headroom should I need it.

The camera was fired by the Miops trigger using the sound triggering settings. This would mean there would be a very slight delay in firing the shutter as I was using a Nikon D4. I had hoped to use the Olympus OM-D E-M1 but the camera lead hadn’t arrived.

The D4 would have a slightly longer delay due to the time required to flip the mirror up and activate the shutter. In the previous product shot of the watch and the action heads, the camera was set to a long exposure in a blacked out room, and the Miops triggered the flash to create the exposure. In that scenario, I had to add a delay of a few milliseconds to give the balloon time to fully burst. With the speaker, I found I had to remove any delay with the triggering, and still found the water had travelled a fair way from the original confinement of the balloon.

Whilst the HS heads allowed me greater control of the light, as I could adjust each head as required for the correct exposure, without affecting the clarity of the moving water in the final image, the delay of the shutter meant I had a set delay by default. This was a by-product of the technique employed with the Miops to make use of the shutter speed, rather than a by-product of the HS heads.

In conclusion, using the HS heads allows greater tuning of the light without having to be concerned about longer light durations possibly allowing blurring to occur within the image, which could be an issue if using action heads and adjusting the light levels. In the case of the action heads, any adjustment to light levels would have to be done by increasing or decreasing the distance from the light source to the subject, as the action heads produce their shortest flash duration at an output of 4.4 through the B port, and if one of the heads is set to a different power output, then a slight blurring may be seen.

I’ve experienced light induced blurring before with IGBT heads when one of the heads had been set a good few stops higher than the others.

With the Elinchrom HS heads, differing light outputs makes no difference, as the motion is stopped by the shutter speed.

The following behind the scene (BTS) images to give you an idea of the setup. 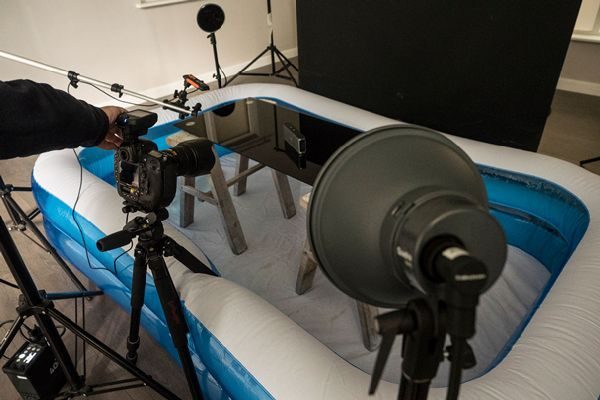 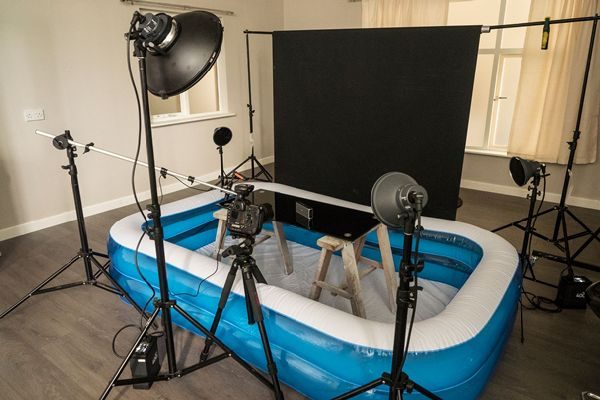 The speaker is the Annaac bluetooth speaker, which is touted as water resistant. Believe me, it was certainly that!

If you are interested in the Miops triggering device, I purchased it from UK Highland Photography, and I’ve previously reviewed it here

If you are outside the UK, you can purchase it directly from Miops on their site.