This is one of the images for the Preston Marriott wedding brochure. The lighting provided by the table lamps gave a really warm and homely feel to the room, and would make a welcoming image for any bride thinking of booking the Marriott for their wedding.

This is the crux of any wedding brochure. It has to evoke an emotional response in the prospective bride, to the point where she feels a sense of loss if she should contemplate looking at another venue. They have to want their photography in this hotel, inspired by the images they have seen. For this reason, I look for areas and locations that are unique to that particular venue.

Here, I was concious of the rather gorgeous lighting around the very large mirror, and how it played on the wall. There was a large doorway right of the frame, which spilled daylight across the area. This would give a nice lift to Lisa’s dress, but would create harsh shadows to her right (frame left).

I placed a Lencarta 360 Atom firing through a gridded beauty dish frame right, at about 1/64th output, and aiming to cover her dress, rather than her face. (I wanted the dress detail to be picked up, along with the folds etc.).

I also used an Atom 180 to frame left, firing through a custom folding 70cm Octa, providing a gentle overall fill to the dress and Lisa’s face. It was firing at 1/32nd output.

I used an ISO of 800 and a fairly slow shutter speed of 1/50th sec to ensure I captured the ambience of the setting provided by the desk lamps. The Atoms were fired on rear curtain sync, which is my default setting TBH. 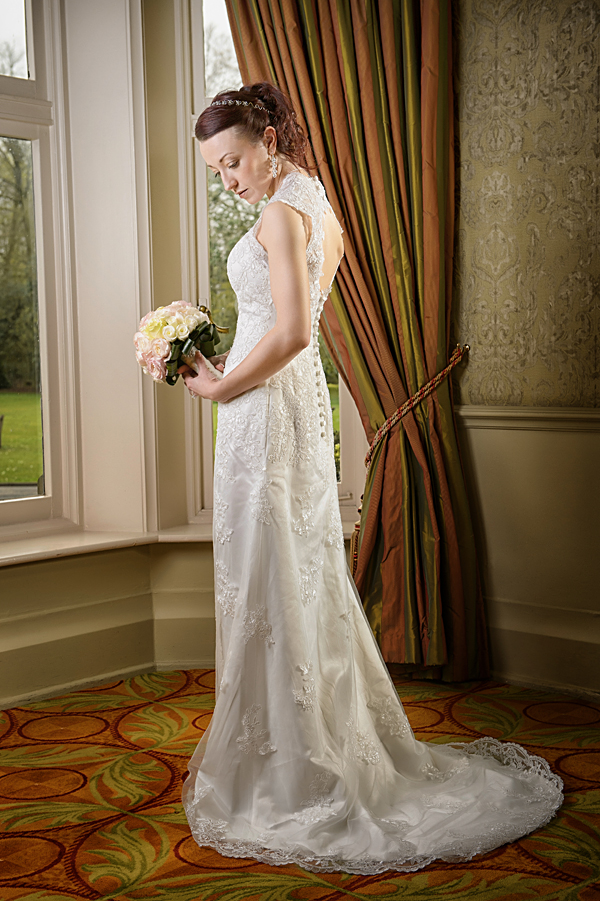 This image was taken in the same room used for ceremonies, but with chairs and registrar’s table removed to allow access to the bay window. I wanted to ensure the view through the window was maintained, and not blown to white. This basically meant I had to carefully balance the external ambient light with the flash I was using indoors.

I set an Atom 360 firing t 1/32 through a gridded beauty dish just outside the right of the frame, with the head at about 6.5 feet. I had the dish angled downward, and basically aimed at Lisa’s midriff. This would essentially provide an accent light the full length of the dress, without lighting the floor unnecessarily. There was enough feather from the light to illuminate her face, and provide the rather nice light skipping across her cheekbone.

The main light was an Atom 180, firing at 1/16 through a custom folding 70cm folding Octa, again at a height of around 6.5 feet and just out of frame left. I had it aimed a little higher to illuminate Lisa’s face, and allow for a gradual falloff towards her feet. 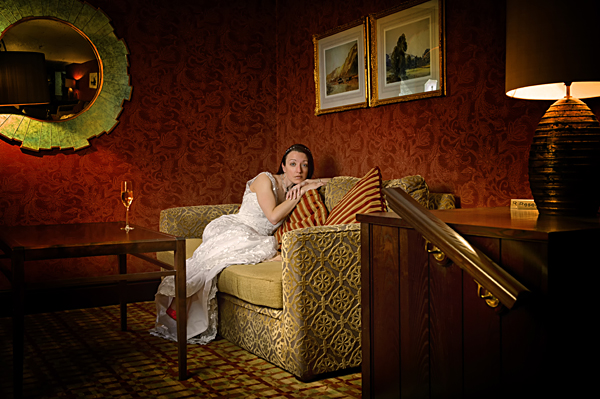 This was a bit of a challenge, if I were to be honest. It’s an image I had carried around as an idea for several years. In fact, ever since I shot the previous wedding brochure for this hotel in 2011. I initially tried to capture the ambience of this little snug by shooting a very long exposure and firing a single speedlight through a softbox on second curtain sync. However, the available light was so low, I found my ISO was creeping up to 3200, and was starting to look like I may need to go beyond.

Using the D4 is fine at that kind of level, but personally, I just wasn’t happy with the idea of creating an image that may be used as a large print within the hotel, with the possibility of visible noise. Yeah, I know the D4 is basically physically restrained pixie dust at these kind of ISO levels, but these images just had to be bang on. The only way out was to recreate the ambience using speedlights completely. I carry a number of tiny speedlights with me, similar in size to the Nikon SB400, but mine have full manual control. Their main drawback is the fact you can make a coffee in the time it takes to recharge after a full discharge. But then again, you can wheedle these guys into the tiniest of spaces  🙂

I put one inside the lamp that can be seen to the left of the frame, set it to 1/32nd and gel’d it with a CTO to give it the warmth normally seen in the snug. A second of these tiny guys was also gel’d and balanced very, very carefully inside the shade seen in the right of the frame. This was a little trickier, as the one on the left just hooked over the supporting wires within the shade, whereas the one on the right just wouldn’t stay put. I had to carefully balance it on top of the energy saving bulb in the lamp.

The main light was provided by a non gel’d speedlight firing at  1/32 through an umbrella with a diffusion panel.

I’m happy with the final result, but it took three times longer than it should have done to get the image.

Many  thanks to Lisa Thomason for modelling. She’s actually my creative director at the studio, and has her own business Big Horse Design and also Little Pony Promotions.

Hair styling was provided by Kenvig’s, who have a salon at the Preston Marriott, as well as a salon in the Manchester Marriott and elsewhere.

Makeup was provided by the beauty department within the Marriott hotel

A huge amount of thanks must go to Sharon Brook, the Events Manager at the Marriott, who ensured everything ticked along smoothly. (And believe me, that took some doing!)

Part two of the brochure shoot can be found here