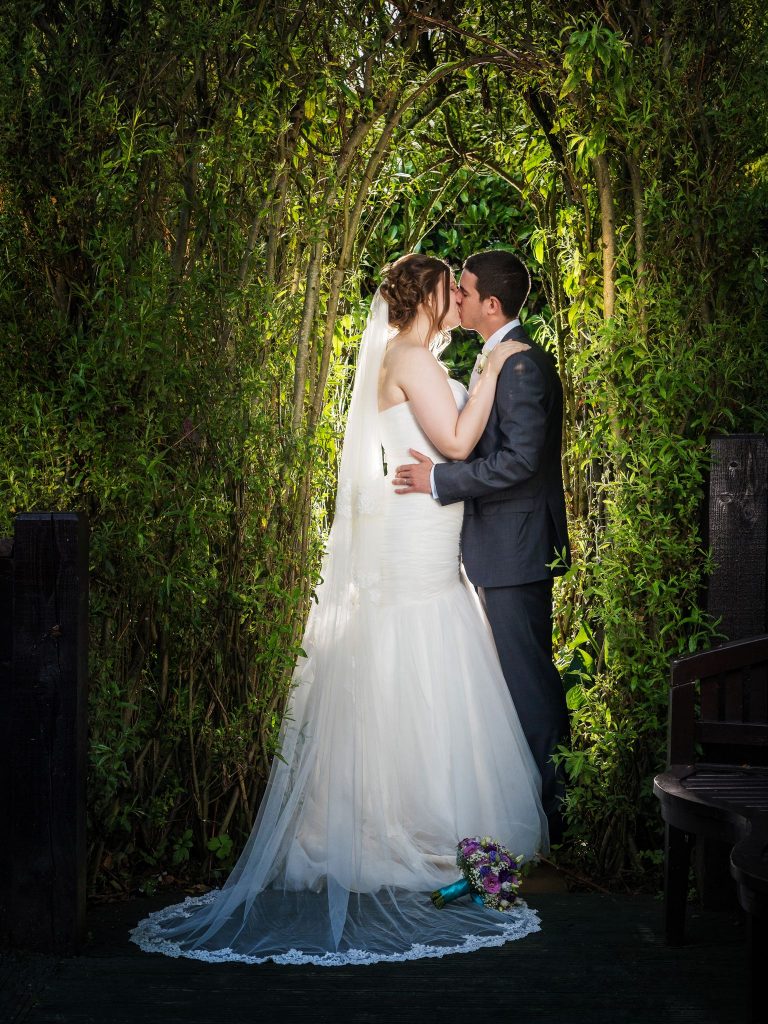 This is Emily and Richard, who married at Gibbon Bridge in August. A beautiful venue with some stunning opportunities for wonderful bridal portraits.

The gardens at the hotel is pretty much a giant bowl, and especially in late summer, you find the sun leaves the garden late afternoon. The group shots and outdoor service etc. are fine, but the steeply banked garden, wall and trees will soon block sunlight as the day progresses. So, speedlights and location kit is the order of the day, and there are so many interesting little nooks and crannies around the grounds, as well as inside, I soon ran out of time with 75% of my potential locations untouched. Seriously, I’d love to go back.

Anywho, lets get to the nitty gritty of the above image.

On the far side of our couple, I placed an ELB400 with an action head, firing through a Quadra 13.5cm reflector at an output of 3.0 (Equivalent to 50Ws). The reflector, which is the one that comes with the heads as standard, provides a 70° angle of illumination. Great for this particular setting, as it provided a good wash of light over the entire interior of the little walkway. Second, it provided the accent light around our couple.

Now, with the first light in place, it caused our couple to become silhouettes, which isn’t what I was after. Frame left, I placed an ELB400 with an action head, firing through a 30x140cm honeycombed stripbox, firing at an output of 4.0 (Equivalent to 100Ws). This basically lit our groom, and was flagged from lighting our bride by the trellis and bushes frame left.

For our bride, I placed another ELB400 frame right with an action head, again firing through a 30x140cm honeycombed stripbox at an output of 4.0 (Equivalent to 100Ws). This was a little trickier to place, as I had far less room frame right to play with. There’s a bench that occupied a space along the walkway fence. The lightstand was basically jammed in, behind the seat, and leant against the fence. 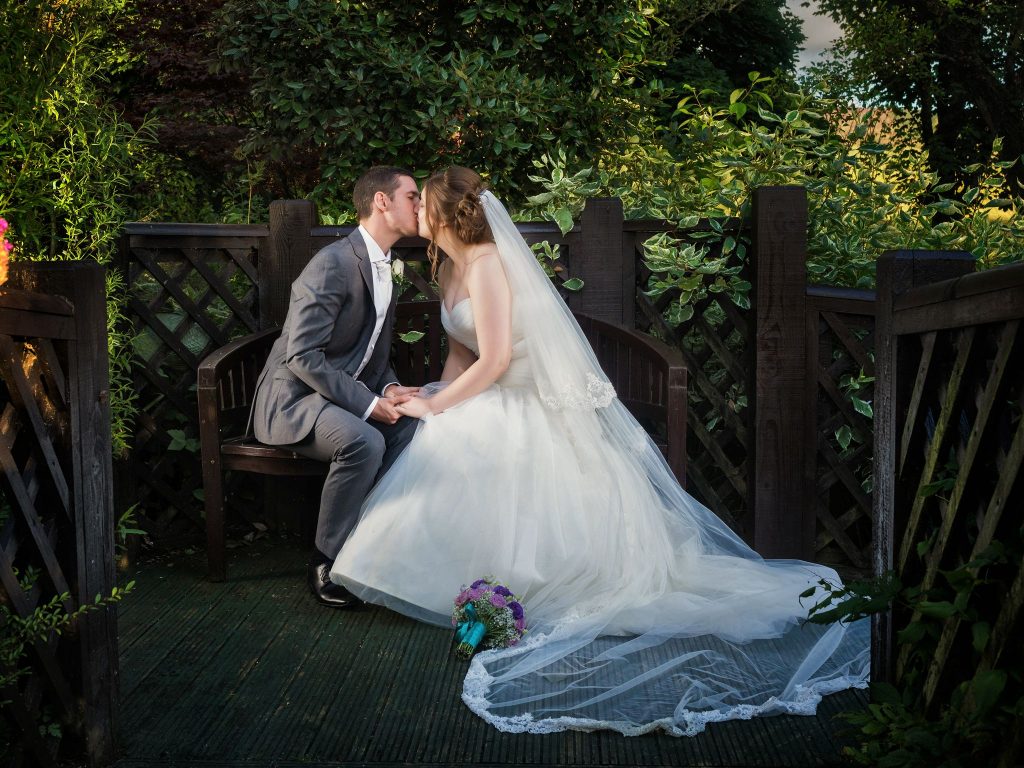 This is the seat I was referring to above, so the trellis is now frame left. I placed one of the ELB400s with a stripbox frame left, within the trellis tunnel. The giveaway are the lit leaves frame left. This supplied the accent lighting to our groom, along with lighting our bride’s face. The output was turned down to 3.5 (Equivalent to 75Ws).

Frame right, I placed the other ELB400 with a stripbox, approximately the same position I had been stood in to take the first image. This was set to a lower output of 3.0 (Equivalent to 50Ws), as the bride’s dress would pick up a lot of the light much easier than the gray of the groom’s suit.

Finally, I had that third ELB400 alongside me, immediate frame left. The Quadra reflector had been swapped out for a folding 80x80cm softbox, providing the keylight, although quite soft to maintain the subdued nature of the image. The output was also set to 3.0 (Equivalent to 50Ws). The camera settings were unchanged. 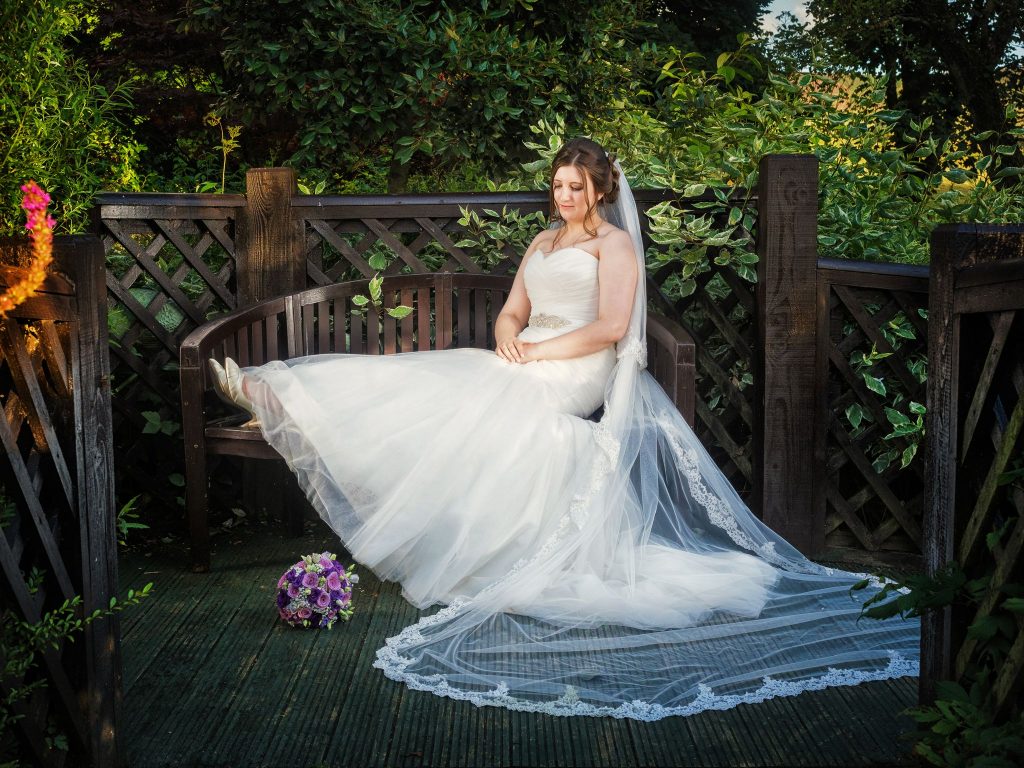 Same lighting setup and camera settings as the previous image. 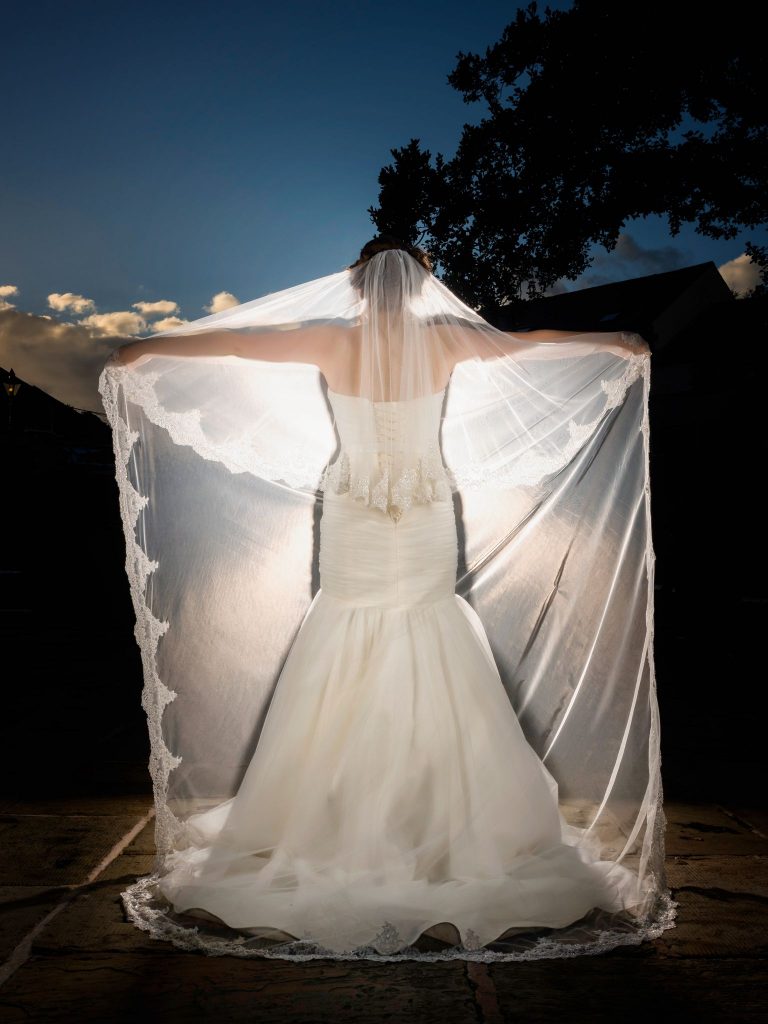 I know the first thought you are likely to have had regarding this image. HS heads and trigger. Well, it’s the action heads at max sync of 1/250th sec.

Remember what I was saying about losing the sun quite early due to the steeply banked garden and the walls and trees? Well, it can play to our advantage, as it did here.

I placed an ELB400 with a standard 18cm reflector on the far side of our bride, at chest height, and about four feet in front of her. She had strict instructions to close her eyes when told to do so. The unit was firing at an output of 4.0 (Equivalent to 100Ws).

Immediately alongside me, and at a height of seven feet, I had a second ELB400, firing through the 80x80cm folding softbox, angled down towards our bride. The output was set to 6.0 (Equivalent to 400Ws).

Anyone currently scouting potential venues, you really need to take a look at Gibbon Bridge in Chipping, near Preston. The hotel is quite something, and the attention to detail by the staff is outstanding. There’s vast potential for your wedding photography, which is a little understated by the hotel’s own literature. However, go poke around, you’ll soon find a lot of attractive little scenarios and locations for those bridal portrait images.

My wedding work can be found at weddingsbymichael.co.uk