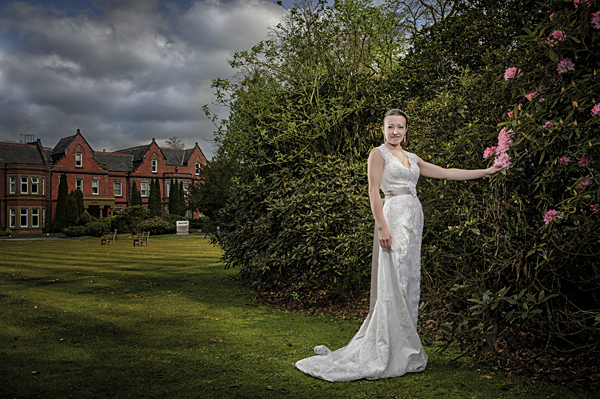 The Preston Marriott wedding brochure was shot over three days. The first two were purely focused on the hotel interior, whereas on the final day, we were to get some exterior images.

The above image was taken at the end of the main lawn, in the shadow of the bushes. You can see the tail of the shadow to Lisa’s left. There were a number of things I needed to consider when assembling this image. I needed to ensure both Lisa and the hotel were in focus, and more importantly, I needed to light Lisa to match the sunlight in the background.

The first was easy enough. A shorter focal length would increase the depth of field for a given aperture. The second point was made easy with the use of the Lencarta Safari 2.

I had one firing at ½ output through a high intensity reflector from frame left. The high intensity reflector ensured the light head and stand could be kept far enough back from Lisa so as not to creep into the frame. The fact it effectively gives you 2.5 times the effective power when compared to a standard reflector. (Seriously, this is an awesome bit of kit for location buffs!).

The second safari was set up just to my right, and mated to a 150cm ProFold Octa, providing the overall lighting to the area, and was firing at about ½. Bear in mind, this is two 600Ws units belting out a fair bit of light.

I had already taken a test shot using ambient only, and then increased both the shutter speed and aperture by a third of a stop each, effectively under exposing the ambient by 2/3rd (-0.7EV), which helped dramatise the sky. 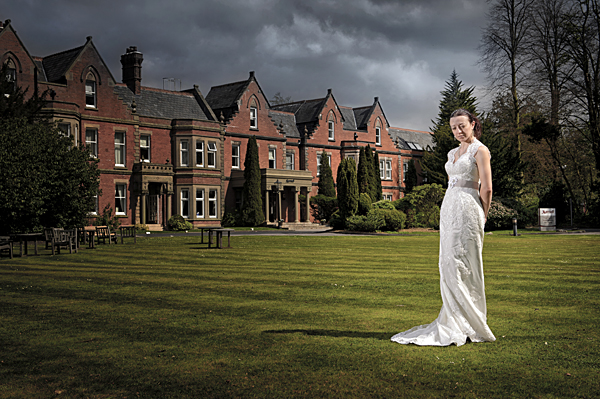 This was taken just before the first image at the top of the page. Similar considerations here, and similar settings. The ISO was 100 and I was only using the one Safari 2 for this image. It was basically being used to fill Lisa’s front , as she had her back to the sun. I used a 120cm ProFold Octa here, and the stand and modifier were only just out of shot. I had it set to ½ output. 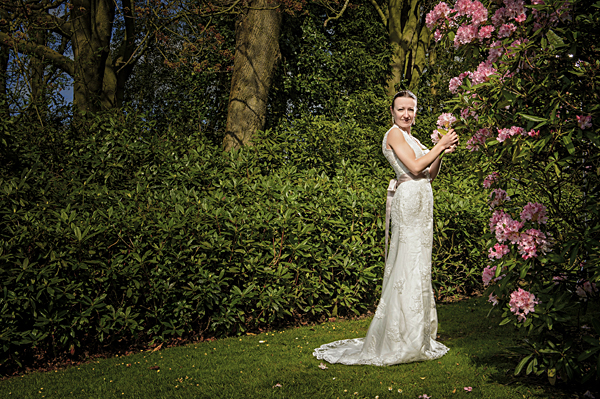 This was the final image of the day. The sun was coming from over my right shoulder, which caused deep shadows in the folds of Lisa’s dress, as well as the right side of her face. It also caused a lot of the flower heads to be in shadow, darkened a lot of that side of the frame. To combat this, I had a Safari 2 firing though a 150cm Octa frame left and just about head heght. It was firing at around ½ output, filling the shadows nicely.

I felt at this point, Lisa didn’t exactly “pop” from the background. To achieve the pop, I used a second Safari 2 firing through the high intensity reflector at a ¼ output, and as high as the lightstand would go. It was placed the other side of the hydrangea, giving a nice sharp accent along the side of Lisa’s face and left arm. If you look very carefully through the flower heads, you can just make out the light from the reflector.