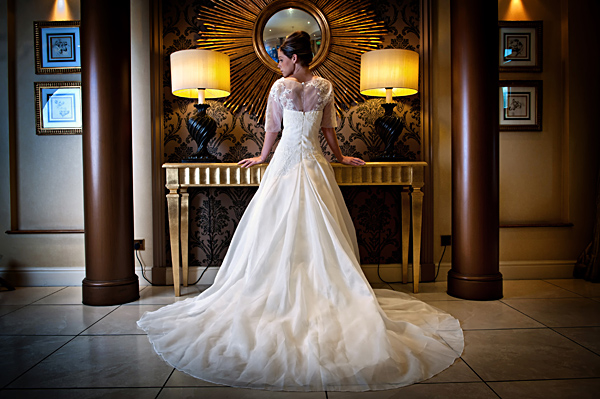 This assignment was for a number of clients, including the Preston Marriott Hotel, Zoe Cookson (importer of couture wedding gowns) and Live Magazines. It also afforded me the opportunity to test the new Lencarta Safari Li-on location lighting equipment, which is the latest version of my own location lighting workhorse, the Safari Classic.

This particular blog entry will detail the thought process and setup for each of the featured images, and will also include my evaluation and thoughts with regards to the Safari Li-on in comparison to the Classic.

I’ll start with the above image, which for me is the defining image for the whole day’s shoot for a number of reasons. For the Marriott, it depicts an area in the reception that is unique to that hotel, which is something I look for in all my wedding venue brochure assignments, helping the hotel to present a visual record of their unique selling points to their prospective brides and grooms. For myself, on the other hand, it was the process involved in the eventual realisation of this image which revealed one of the unique features of the new Safari.

The reception has rich golds and browns with regards to the architecture, décor and furniture, all of which provides the ambience. I was also conscious of the fact the ambience was very much reliant on the lighting within the room.

Photographing a gown for a manufacturer or retailer demands a different approach than when photographing for a bride and groom’s informal portrait session, or for a hotel’s wedding brochure. For a wedding album or the hotel, the bride and groom can be lit in quite a dramatic fashion, using all the techniques available to really make the image pop and give it the wow factor. Unfortunately, you can’t really go quite that far when the images are to promote the gown itself. The detailed work on the gown has to be visible. As any good photographer will tell you, the light reveals your subject, but it’s the shadows that define it. If we had gone for a lit dramatic look here, the harder shadows would have been detrimental to Zoe as a gown importer.

Yes, flat lighting is still something to be avoided, but here, it’s about as close as you want to get to flat lighting without it being flat.

We had a large 150cm folding octabox camera left, the centre of which was about 4 feet high. It was probably about two thirds the distance between Nicola (the model) and myself, and angled directly at Nicola. The large front area meant it would still provide soft lighting at the 8-10 feet distance from Nicola, and being off to one side meant the lighting wasn’t truly “flat” in the traditional sense, insofar as it still created shadows, albeit quite subtle and soft shadowing, which helps define the folds in the gown, and on the full resolution image, the delicate embroidery around the bodice is clearly visible and enhanced by the soft shadow.

We were using a single head and had turned the power down as low as possible, but I found the light output was still too strong for the image I wanted, as it overpowered the table lights quite easily and therefore flattened the ambience of the image. If I had been using the Safari Classic, I would have needed both heads attached so as to drop the output to 300ws per head, and I would have had the problem of discharging the light from the second head without it contaminating the image. Something I couldn’t have done for this particular image, as there was a huge glass partition behind me which would certainly have reflected the light. I also think that even 300ws turned right down to 1/8th (the minimum on the Classic), would have been too strong.

Garry Edwards who provides technical support for Lencarta, was on hand for the assignment to provide support for the new Safari. As soon as I talked to Garry about my intentions and the need to reduce the light even further, he pointed out the head could be swapped to the “B” port, which would give a maximum output of 200ws, half that of the “A” port, and it would have 5 stops of adjustment (down to1/16th output).

As soon as the port was swapped and the output dialled to the lowest setting, I had my image and I was convinced Santa would be bringing me a new toy at Christmas  🙂

You may be thinking “Why not just use speedlights, as they would dial down much lower and be less powerful anyway.” True indeed, but they couldn’t power a large octabox, and would therefore create much harsher shadows. This image, in this particular setting, was possible because of the new Safari Li-on. I’m quite certain I would have struggled to get the same ambience from this location if I had been using the Safari Classic.

The ISO of 800 was used to capture the ambient lighting, helped by the aperture of f5, both of which dictated the requirement for the minimal kiss of light from the Safari. There was also a large silver reflector camera right which helped fill the right side of the gown, and also killed some tungsten colour contamination from the lamp.

Incidentally, at the push of a button, the Safari Li-on will combine the power of both ports to give a combined output of 600ws through port “A”, the same as when a single head is used on the Safari Classic. 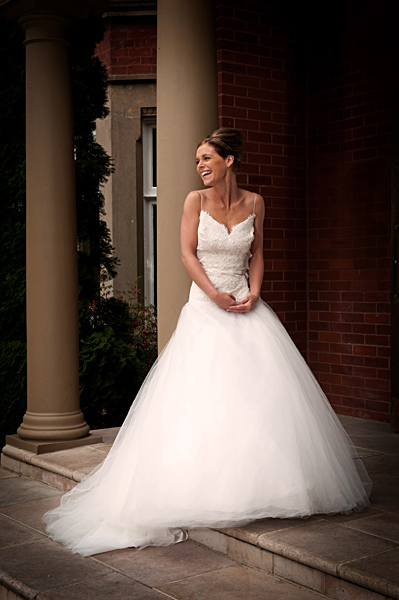 This is the front steps the hotel, and we had to cope with frequent pedestrian traffic. The same 150cm octabox is camera left, and raised to the maximum height of 2.7m. In this instance, both the diffusion panels were removed to give the light a little more oomph, mainly due to the distance of about 20 feet to Nicola. That said, due to it’s size, the light still wasn’t particularly harsh. Again, there was a large reflector panel just out of frame, camera right. 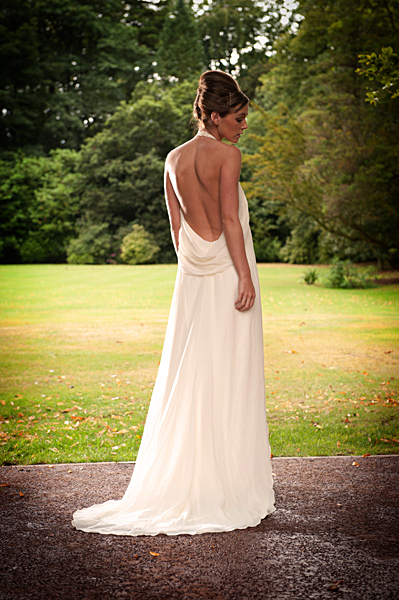 This was the last image of the day, and came after about eight hours shooting. I was contemplating the best way to light Nicola, with the intention to show the lawn behind her. Garry suggested a rim light utilising a high intensity reflector. The initial image of Nicola facing the camera was ok, but didn’t really seem strong enough. As soon as I asked Nicola to turn about, and twist her upper torso slightly, I felt we had a far stronger image. The exposure was metered for ambient, and the Safari was set to output about half a stop above that, giving the illusion of sunlight. And just so as you know, we didn’t see any sun at all until we packed up to go home. Typical!

Advantages of the Li-on

Advantages of the Classic

For me, the two versions compliment each other perfectly, and a Li-on will not replace my Classic, but will be used alongside. A combination of the two will give me a very usable, fully portable studio setup. The asynchronous nature of the Li-on and synchronous nature of the Classic is a huge boon, as it would provide any number of combinations depending on the requirements of the assignment. Location hair photography for instance, would benefit greatly. The Classic with a single head for key (600ws), the Li-on providing a 200ws and 400ws for fill and hair light. The Classic could be split to provide two 300ws heads, meaning the Li-on 400ws head would become key. The combinations and applications are huge.

Can you tell I’m excited?

The documentary video recorded on the day can be viewed here

Extensive power tests on the Li-on may be viewed here

Many thanks to Garry Edwards and Lencarta for their help and support.