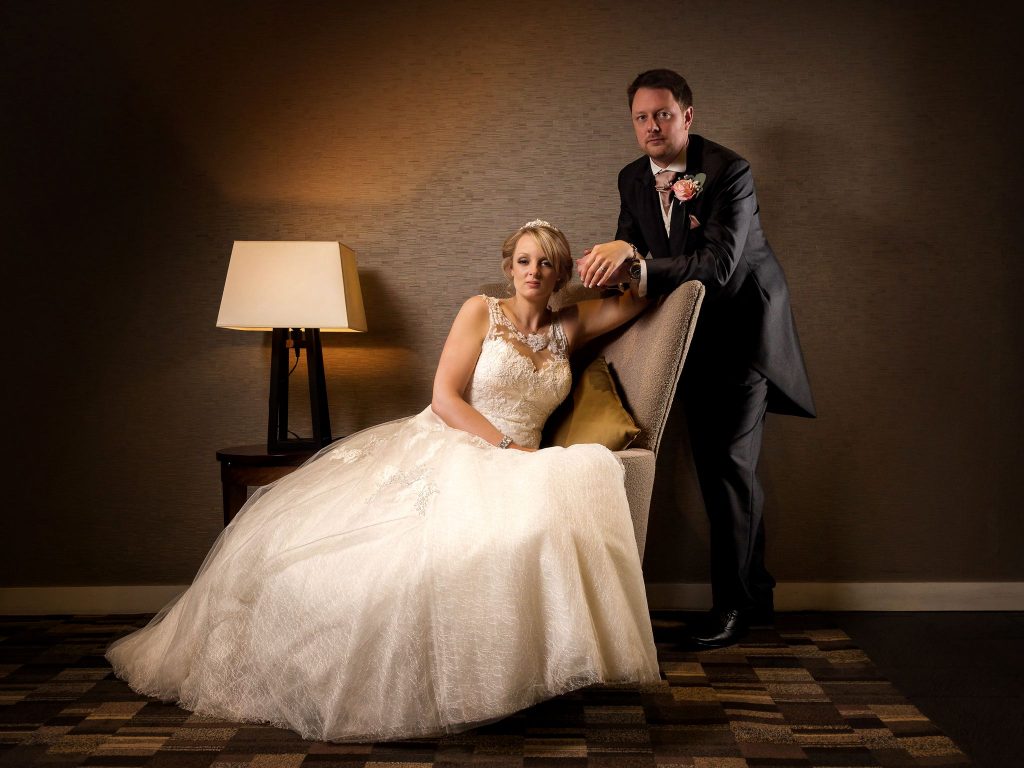 Occasionally, I come across a venue where I feel I may have a bit of a challenge with regards as to where I may do the portrait session. The Samlesbury Hotel is one of those. There is a large car park, which basically surrounds the hotel. There is a field, which I’ve used before, but it wasn’t going to work this time, as this was a November wedding, and it was dark.

So, a little scouting around the hotel, and I come across a rather nice chair and table lamp in the reception. The area had a nice feel to it, aided by the lamplight, and it’s illumination of the wall.

I used two light sources here. I had an Elinchrom ELB400 placed frame right, pretty much along the wall. It was firing through a 30x140cm honeycombed stripbox at an output of 1.5 (Equivalent to 18Ws)

My key light is another ELB400 placed frame left, and firing through a honeycombed 80x80cm folding softbox, at an output of 2.0 (Equivalent to 25Ws). The head was about five feet, and angled down towards the seating cushion, so the light to the brides face was pretty much on the edge of the feather. This was so as to keep the light off the higher part of the wall. It took a couple of shots to get the feathering right, as initially, the groom’s face was in darkness. You will still notice he is marginally less exposed than the bride.

I chose to use an ISO of 400, combined with a slow shutter speed of 1/30th sec, allowing me to capture more of the ambient light from the table lamp. 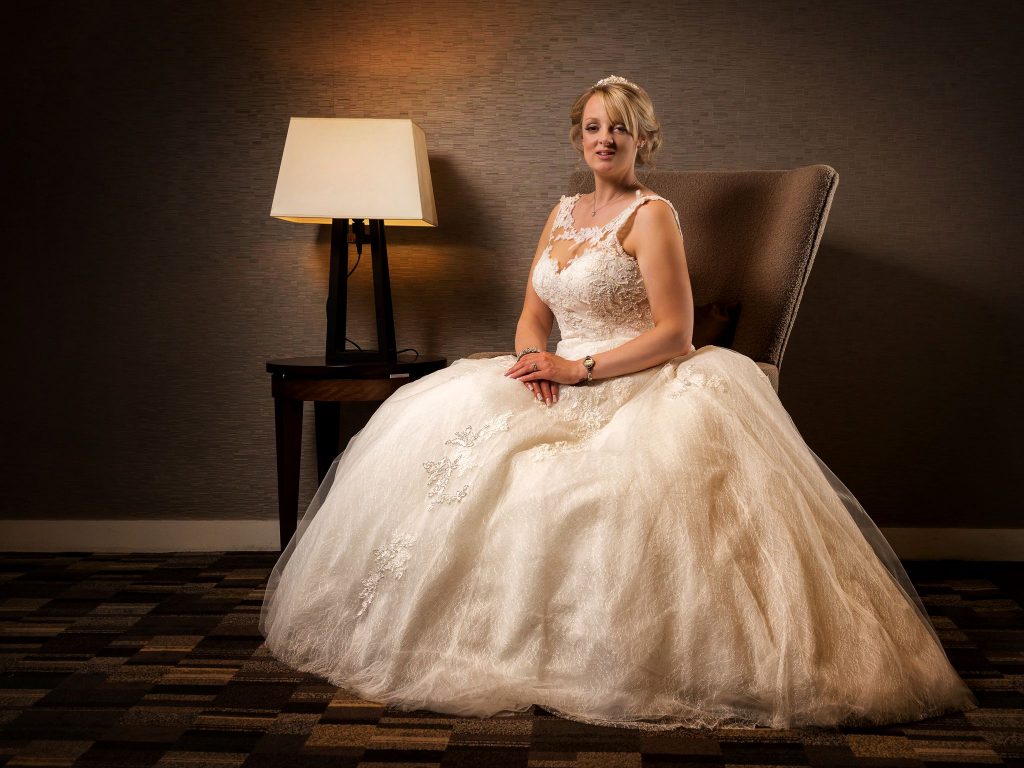 Exactly the same lighting setup as the first image. 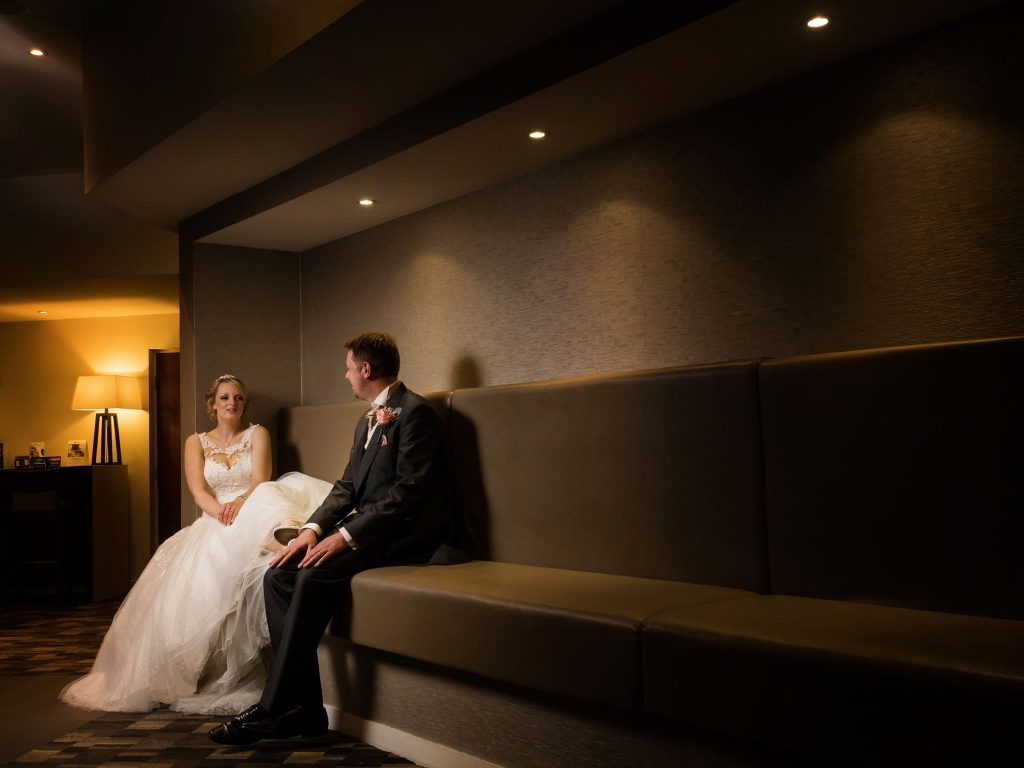 We’re still in the reception area, and the long wall alcove is positioned behind where I knelt to take the above two images. This is a back to basics image, and makes use of a single light source. The ELB400 with the honeycombed 80x80cm folding softbox was placed frame left, and at a height of about five feet, angling slightly downward towards our couple (see the groom’s shadow). The output was reduced to 1.5 (Equivalent to 18Ws), as it was much nearer than when used for the first two images. Again, I made use of an ISO of 400 and a slow shutter speed of 1/30th sec to capture the ambience of the area. 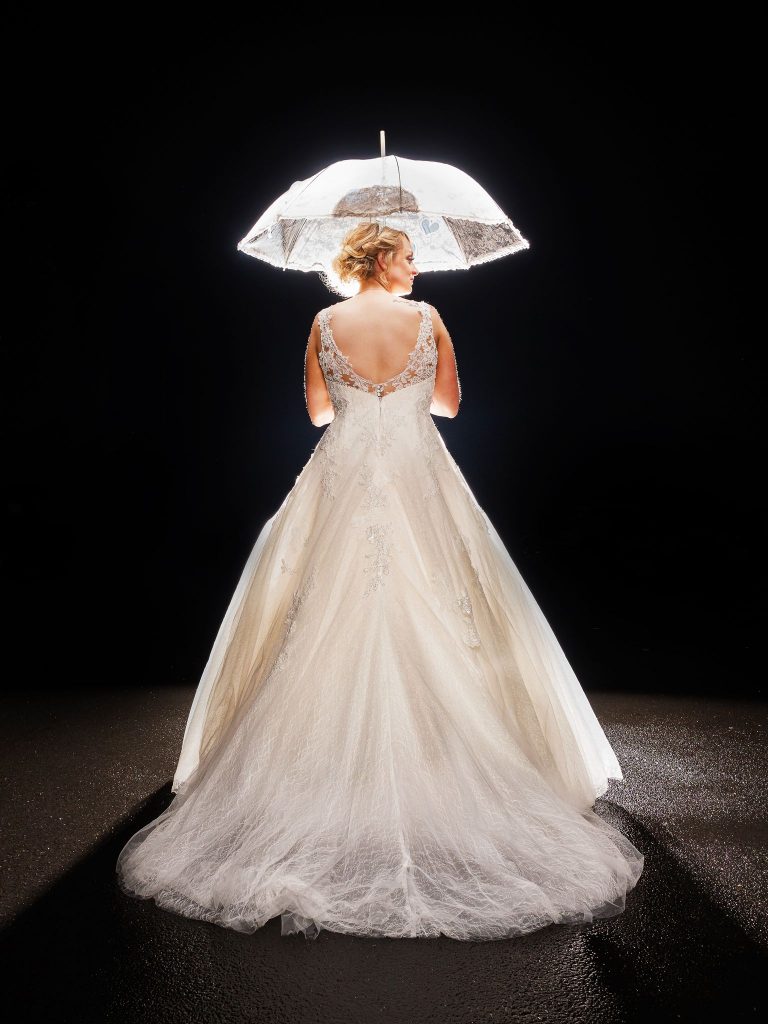 This was a return to the hotel car park. A very simple two light set up, consisting of a rim light and key light.

The rim light was an ELB400 on the far side of our bride, firing through a 17cm standard reflector at chest height, and an output of 2.0 (Equivalent to 25Ws). This not only gives our bride a rim light, it also fills the brolly, and due to the brolly being white, it also reflects the light down onto her face quite nicely.

The key light is our trusty LB400 and the 80x80cm honeycomed quick folding softbox. The reason for the honeycomb was to stop the light spreading too wide, and highlighting the cars that are actually either side of the rim light, and a little further back.

I had the ISO at 200 and a high shutter speed of 1/250th of a second, to ensure any of the street lighting beyond the car park was completely shut down.

Many thanks to Salmesbury Hotel staff, for being so understanding and supportive.

My wedding work can be found at weddingsbymichael.co.uk