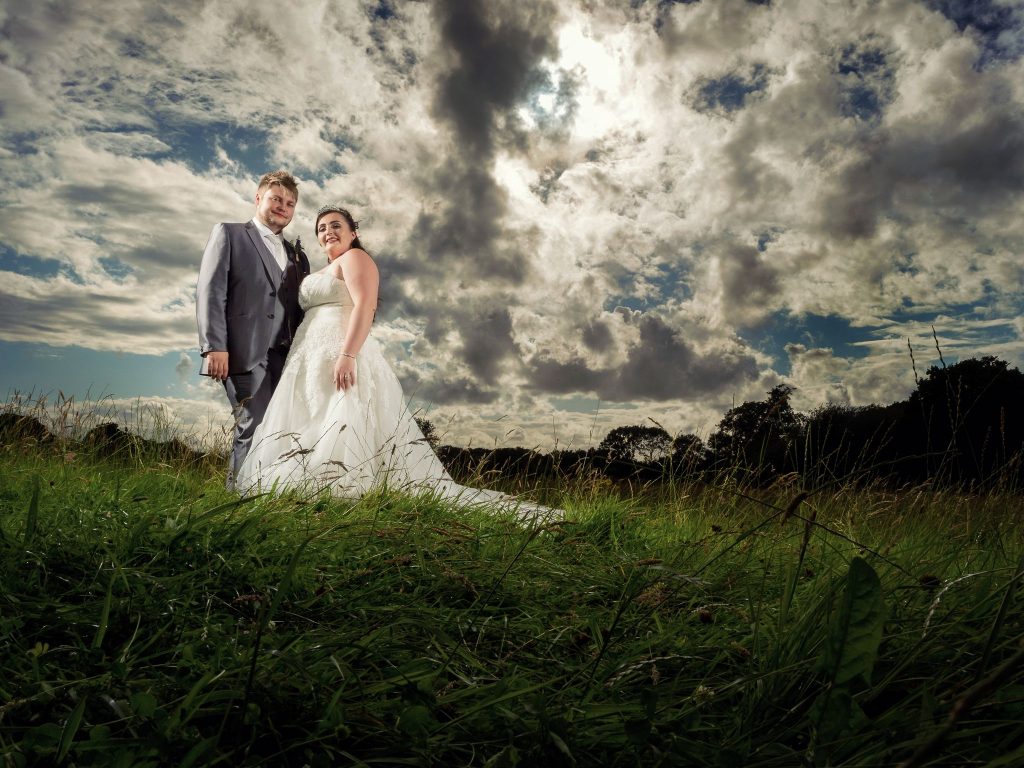 The Samlesbury Hotel, just outside Preston, has some interesting locations for wedding photography, if you go looking for them.

This was a new venue for me. I’d visited before, but that was for a commercial client meeting, and nothing to do with weddings. And to be honest, that’s how I prefer it to be with a new hotel. At one time, I used to visit the venue prior to the wedding, and look for various locations, such as in the garden or the hotel. But if those plans went to the wall on the day, either because of the weather with regards to the garden, or possibly the hotel may have a private function in that rather nice little snug room; I would find I was somewhat blind to other opportunities as I’d already planned the shoots with locations in mind.

Now, I go with the flow. I’ve found doing a walk-around during the wedding breakfast, allows me to look at the hotel and grounds with fresh eyes. Even shooting in the same venue on numerous occasions, leaving the decision as to where to do the bridal portrait session till half an hour before onset, can provide me with fresh ideas and perspectives. I think it’s down to the fact I leave the planning of the session till I’m almost ready to start the shoot. Either that, or it’s just blind panic at the last minute! Either way, it works.

In the case of the Samlesbury Hotel, as I said, I’ve visited on one occasion before, and driven past it numerous times. From the road, I’d often thought it kinda blended in. It didn’t exactly catch the eye. But what’s that saying about judging a book by its cover?

The first thing I noticed as I arrived for the day, were the large fields behind the hotel, which seemed to be part of the hotel grounds, and no problems regarding access. Just step off the car park.

The above image was taken in the field immediately behind the hotel. It was one of those days that alternated between darkly overcast, and bright sunlight. We had a bit of a breeze, which was going to cause a bit of concern for lights, especially with halfway decent sized modifiers. Normally, I used camping guide ropes and tent pegs to secure the light stands on such days. However, I had a number of volunteers more than happy to help on the day. Not to mention I had Hazel as a second shooter and assistant.

Lets move on to the above image, before I forget why I’m writing this.

Frame left, I placed an Elinchrom ELB400 firing an action head through an 18cm reflector from a height of eight feet, angled down towards our bride and groom. It was set to fire at an output of 5.0 (Equivalent to 200Ws).

Frame right was a second ELB400. Again firing an action head with an 18cm reflector. It was also at eight feet and with an output of 5.0 (Equivalent to 200Ws).

The keylight was a third ELB400 and action head, firing through a folding 80x80cm softbox, at a height of just over seven feet. It was firing at an output of 6.0 (Equivalent to 400Ws).

The camera was placed as low as possible, basically resting on the ground. 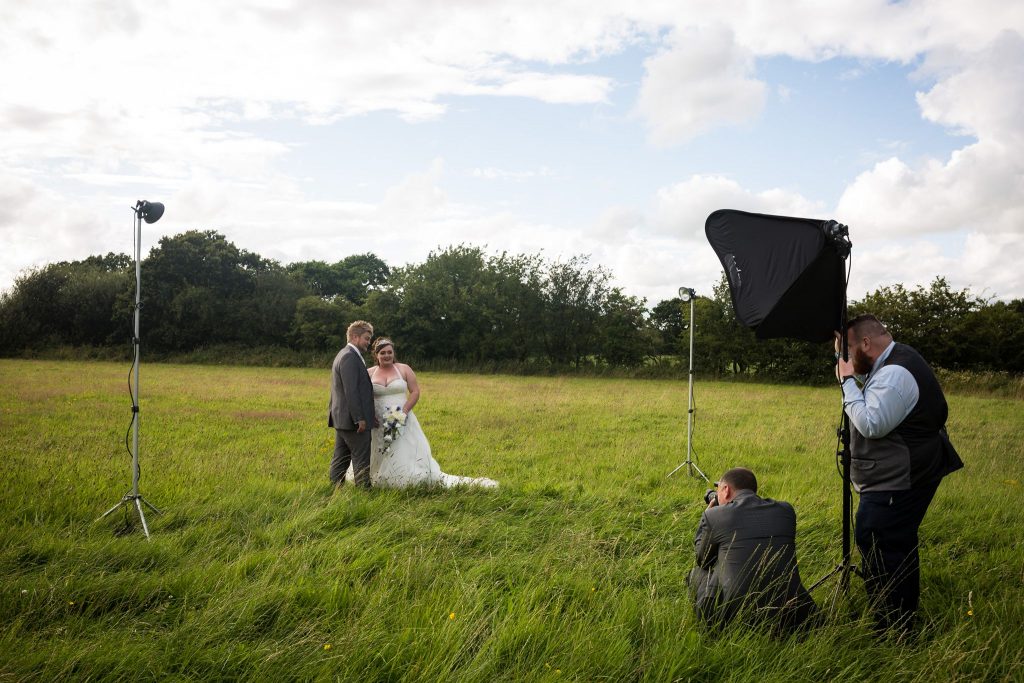 This behind the scenes images was taken by Hazel, and actually shows me taking another shot, as the camera is higher. The gentleman anchoring the lightstand for me, is Ross Ryder, one of the groomsmen. 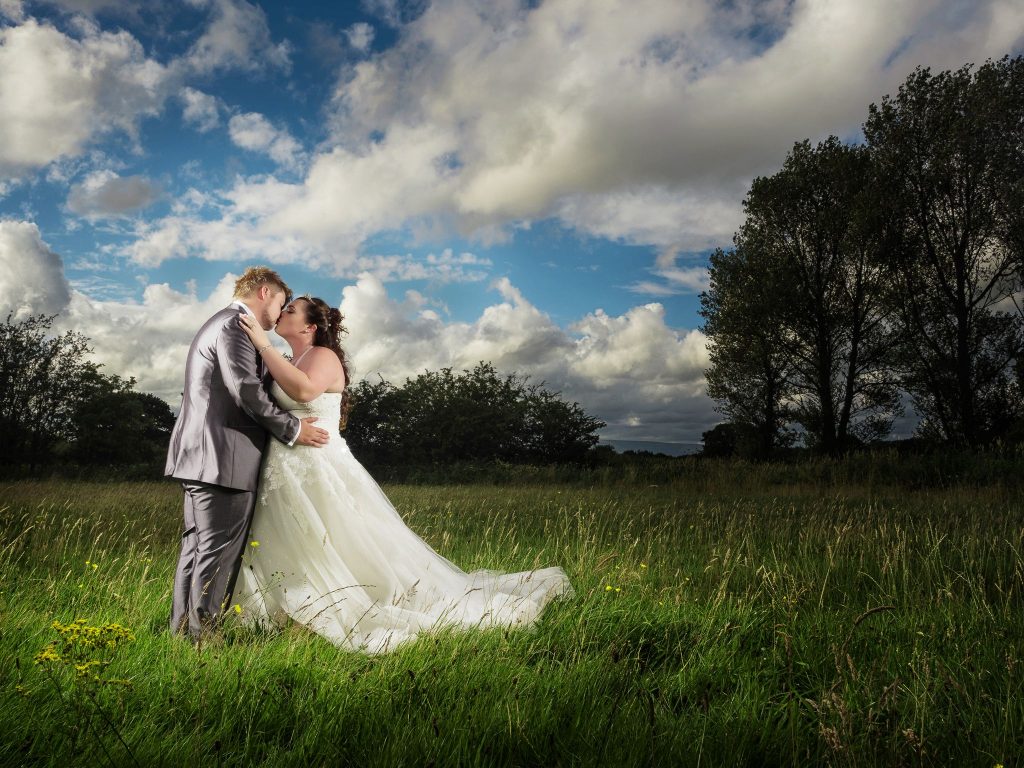 I moved the couple around by 90°, due to an open patch of blue sky and the row of trees frame right. Still the same lighting setup, with accent lights either side, and at the same light output. The keylight is alongside me, immediate frame right. Again, the same output.

I had slowed the shutter to 1/125th sec, giving me an extra stop of ambient capture, along with opening the aperture to F13. 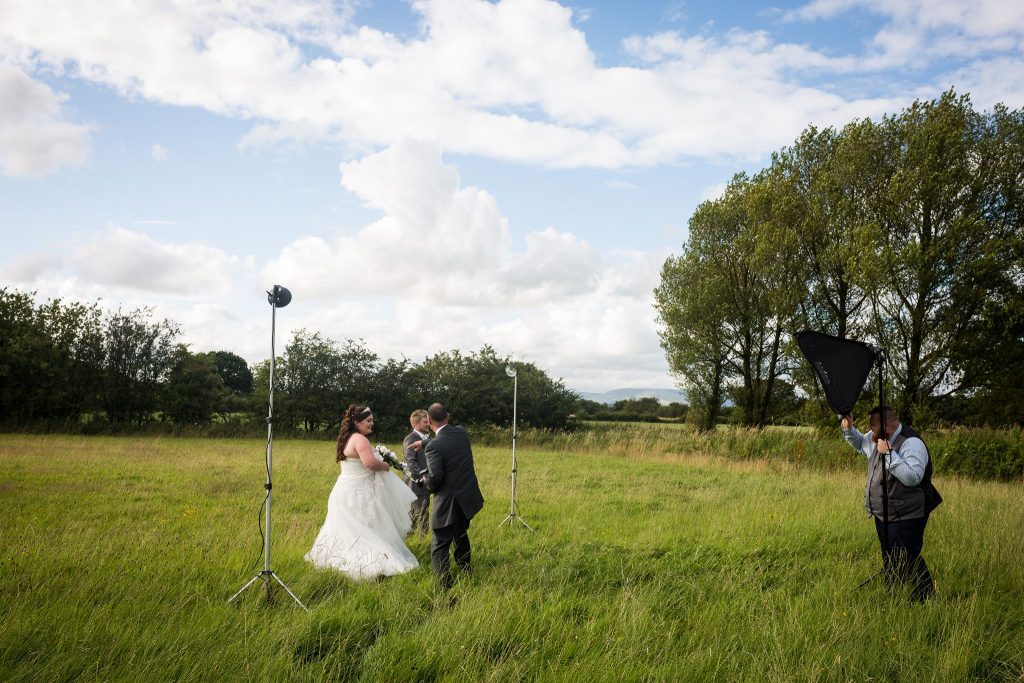 Another BTS from Hazel. 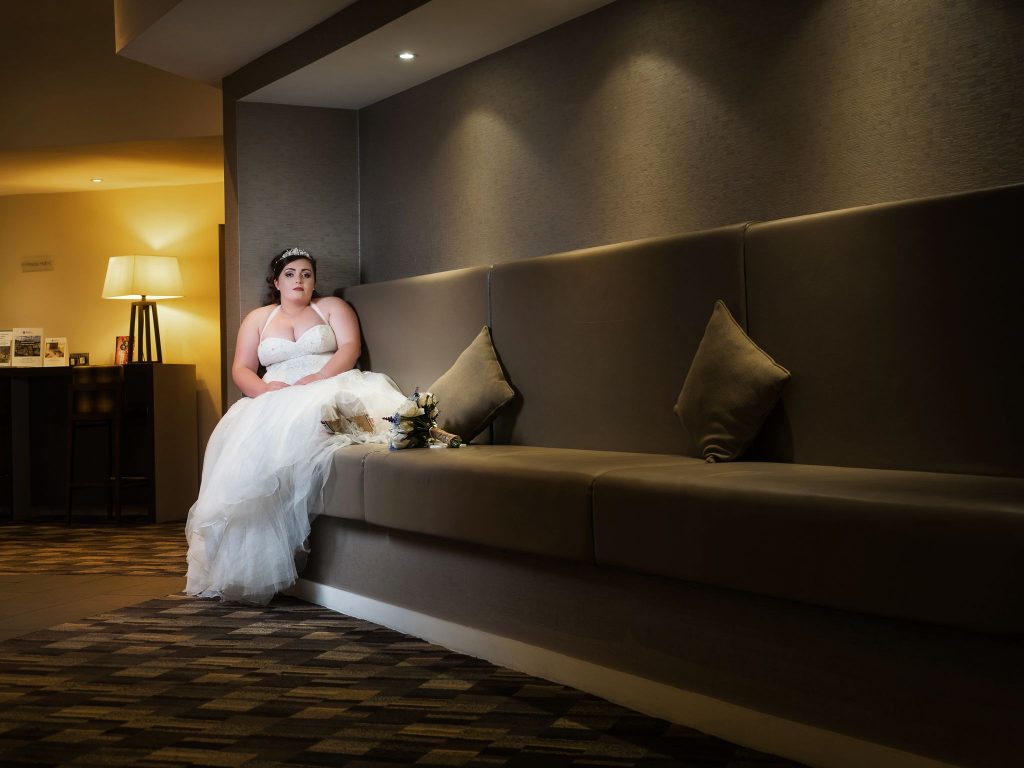 This rather wonderful seat, is actually in the hotel reception. And believe me, the reception isn’t your run of the mill reception, either. This was one of the first locations that really caught my eye as I came into the hotel. The lights above the seat, created a nice warmth to the area.

I had a choice here. I could gel the light to match the warm lights, or choose to stay with the standard flash, and allow the warmth of the lights to wash into the image. By carefully managing the fall of my keylight, I could ensure our bride matched my white balance (flash), and not washout too much of the warmth from the surrounding seat and lights. My keylight was the ELB400 with the folding 80x80cm softbox, placed just out of frame, and frame left. It was basically firing straight on to Emma, and at her head height, although angled down towards the level of the seat. This ensured the light from the flash would wash the warmth from the carpet, rather than above Emma. The output was set to 2.0 (Equivalent to 25Ws).

Just the one light, and a slow shutter to bring up the ambient. 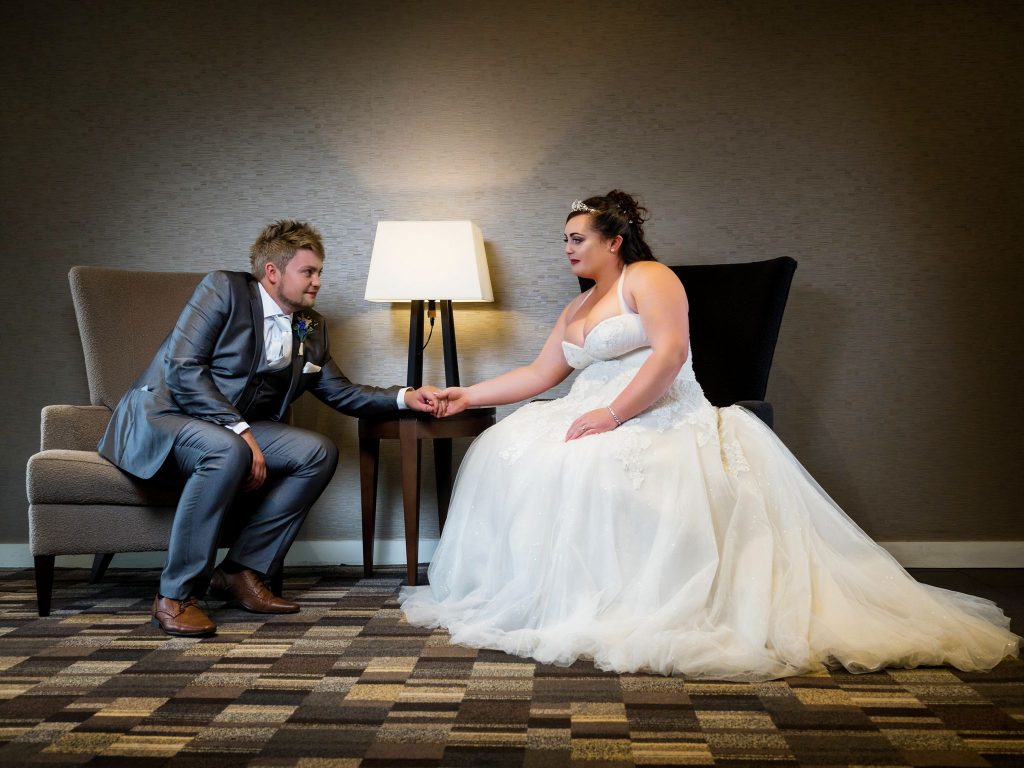 This was a much more complex setup. I needed to ensure I had good separation with Ben’s jacket, otherwise it would disappear into the shadow, along with the frame left side of hs chair. Particularly if I resorted to using a single lamp. Plus, both of their faces stood a chance of being illuminated orange, due to the lamp between them. However, if I hit them too hard with the keylight, I’d wash out any of the warmth and atmosphere from the lamp. I also need a bit of a lift to the back of Emma’s dress and hair.

I placed an ELB400 frame left, firing through a 30x140cm, honeycombed stripbox at the lowest height possible on the lightstand. It was set to fire at an output of 3.0 (Equivalent to 50Ws). This gives the shape and texture to Ben’s suit and chair. The stripbox was tweaked a number of times to keep the light off the wall.

A second ELB400 and honeycombed 30x140cm stripbox was placed frame right, firing at an output of 2.0 (Equivalent to 25Ws). Again, close attention was paid to the fall of the light, to keep it off the wall. It was a similar distance to Emma, as the other accent light was to Ben. However, the bridal gown reflected a lot more of the light, and I was mindful not to blow out any detail on the dress.

The keylight was our same ELB400 with the folding 80x80cm softbox at a height of about six feet, but angled down towards the knees of our bride and groom. This ensured the light was mostly on our couple,only feathering as high as the top of the lamp, and preserving the overall ambience of created by the table lamp. Well, that’s the theory. Output was set to 3.0 (Equivalent to 50Ws).

The following behind the scenes images are provided by Hazel, and illustrate the attitude of the heads and light sources quite well. Ignore the bald patch. 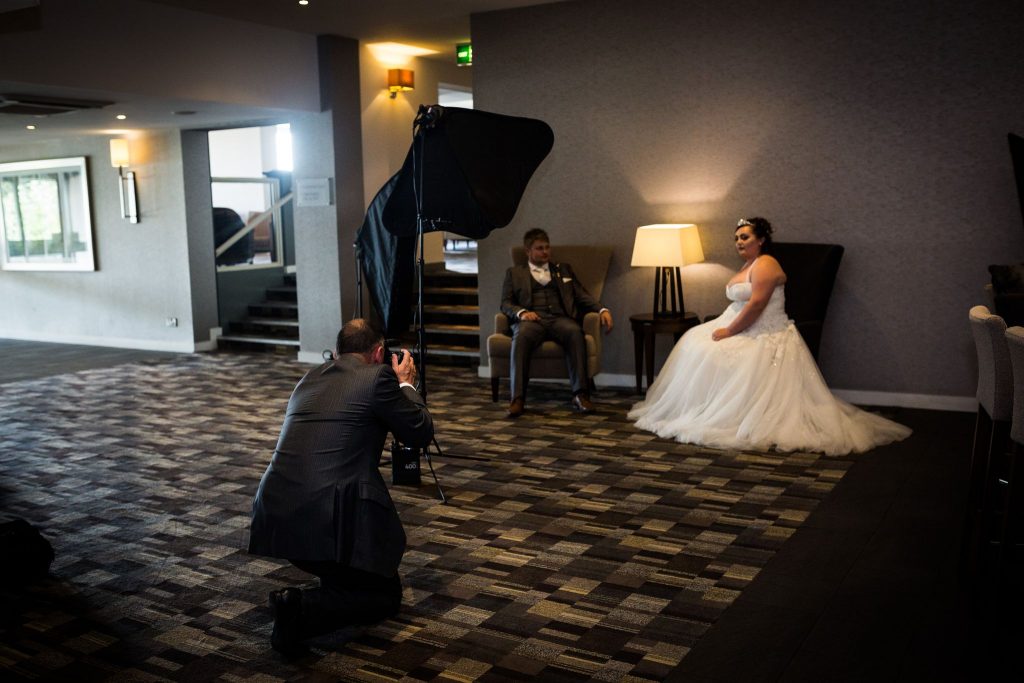 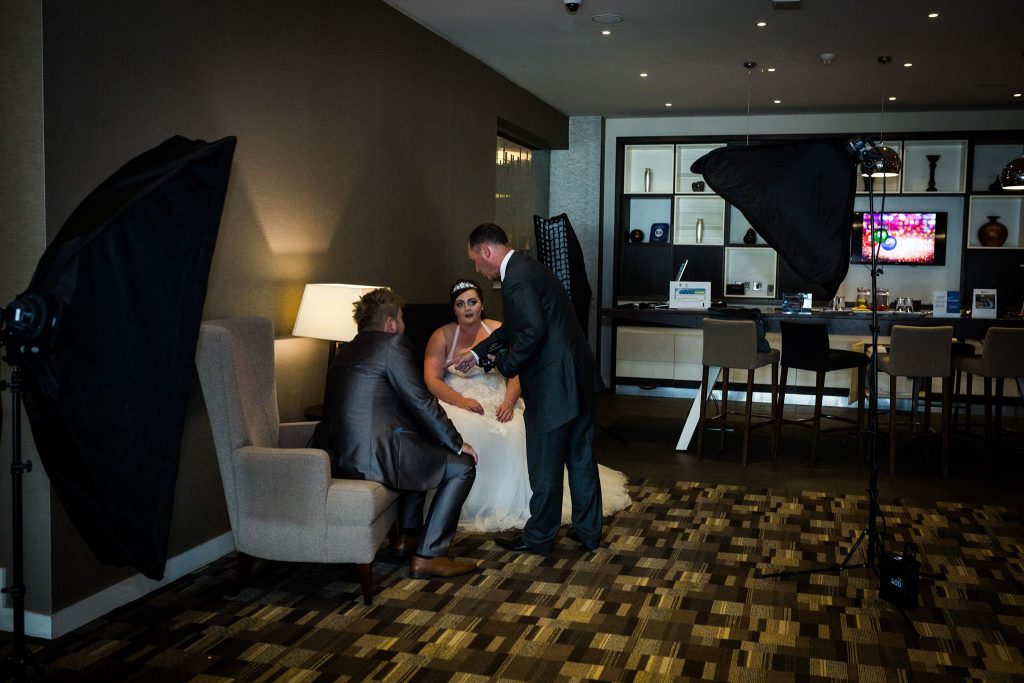 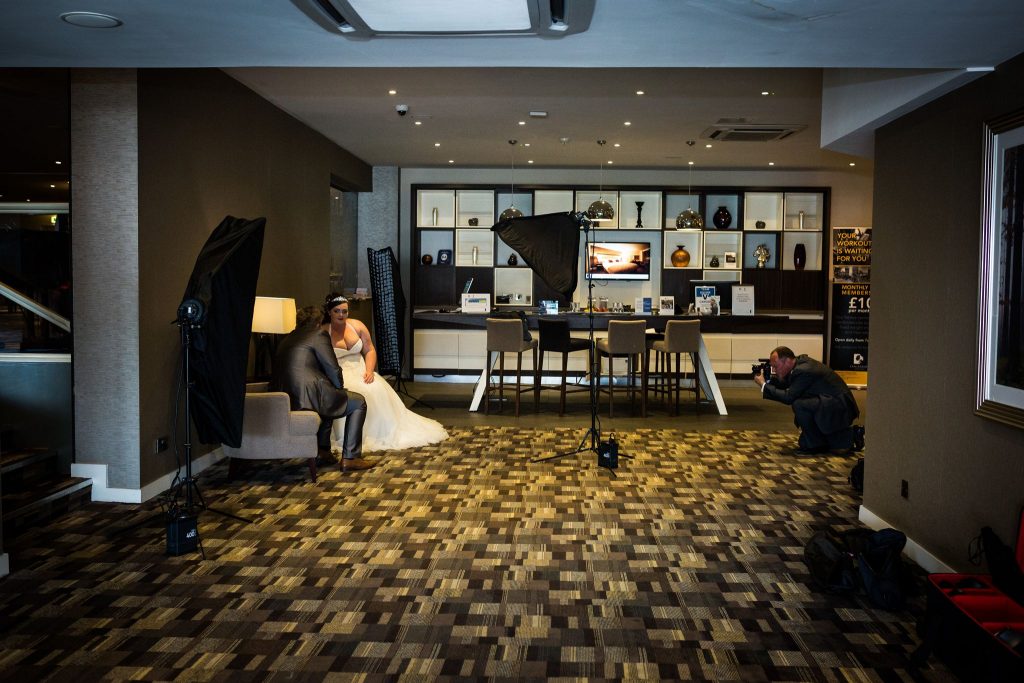 I have to say, the Samlesbury Hotel was an extremely pleasant surprise, and there’s an awful lot more to the hotel than might be perceived from the roadside. The staff were wonderful, and just couldn’t do enough to make Emma and Ben’s day just perfect.

Samlesbury Hotel is part of the Best Western group, and can be found here.

Thanks go to Hazel, for assisting on the day, and generally keeping me out of trouble. Hazel is an excellent photographer in her own right, and can be found at : hazeriddle.wixsite.com

I also need to thank Ross Ryder. A thoroughly nice chap who entertained me as I worked. An excellent assistant, by anyone’s standards. I’ve no idea where he works or what he does, but I can certainly recommend him as an assistant.