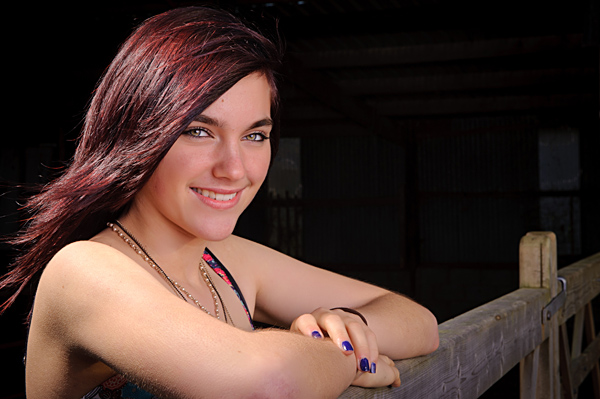 This was a shoot that had been promised for a number of years. The young lady is in fact my niece, Chelsea, and some time ago I said I’d organise a portrait session for her. Well, time soon slipped by, and the 120 miles between us doesn’t help.

Anyway, as tends to happen, things eventually catch up with you and bite you on your bum. My father, in his own diplomatic way, asked me when I was going to get around to it, now that more than two years had passed. Next week?

And with any family promise; a date once given, shouldn’t be broken. So I made the trip over and collected Pop, Chelsea and her friend Anya, before moving on to a very nice rural location.

The image above was the most difficult on the day. The sun is actually quite low, with only about an hour to sunset, and way off to the right. This caused quite harsh shadowing across the right side of Chelsea’s face (camera left), and the total loss of colour and detail to her hair. In fact, you can still see the remains of the shadow caused by the sun, falling across her neck.

I elected to effectively change the position of the sun, by lighting Chelsea from immediate camera right. I used a Lencarta Safari Classic fired through a 120 folding octabox, at a height of around six feet on a standard 2.6m light stand. This sorted out the shadowing, and only needed to have the Safari unit at 1/4 power to be slightly stronger than the waning sunlight. The fact the octabox was only around three feet from Chelsea was also advantageous. I was getting a really nice soft light across her face, but her dark hair absorbed a lot of the light, and it was only really being lit along the front edge.

I used a second Safari head, firing through a 70cm white beauty dish and positioned at maximum height on a 2.6m stand. It was placed barely out of frame, about two feet from her head and angled down towards her. This very nicely lit up her hair and provided good texture due to the light travelling across the strands of hair.

As the Safari power was now divided between the two heads, I increased the output from 1/4 to 1/2, which gave me the same output levels I’d previously used when starting to assemble the lighting for the portrait.