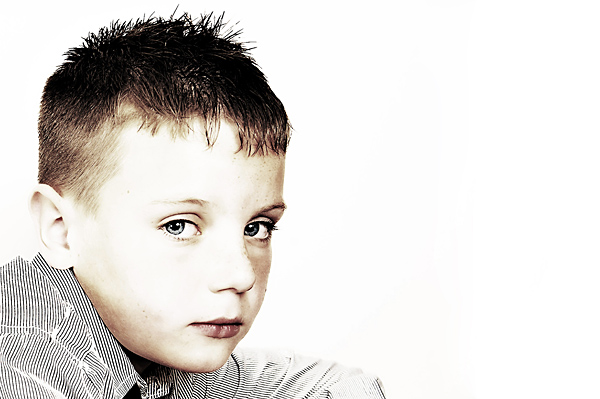 Portraits. Child portraits. Pretty synonymous with THAT studio. You know the one, with the blown out look and vivid colours and blah blah blah.

Not my cup of tea, I have to say. It’s not something I’ve done, and I had no intention of “doing”.

ok, so what happened?

I did a family portrait shoot, parents, two sons and two daughters. Groups and individuals, all straightforward stuff. Whilst I was there, I noticed the pictures they already had on the walls, all rather large, and all rather “samey”! And what’s more, all from the touted studio.

Nah, not my taste I said to myself, and pretty much forgot about them.

Back at the office, I selected the images to work on, and went through my workflow methodically till I was almost done. One image in particular kept drawing me back. It was a shot of the eldest boy leaning nonchalantly with “that look” in his eyes. You know the look I mean. Well, if you have teenage sons, you do!

The standard processing seemed to take away from the image, rather than add anything. It didn’t seem right somehow. It was during the third re-edit I started thinking of the pictures already hung on their walls. Still not my sort of thing. All that artificial high key stuff and strong colours, I really don’t like it.

It was a “look” they obviously liked, and that’s not for me to judge. I whacked the curves up to give it that harsh high key effect, and then tweaked the colours a touch.

Hmmm, I had me a portrait I grudgingly liked.

It’s still not my cup of tea, but it certainly taught me something. My choice isn’t necessarily the right one, especially if I want to sell the images to a client. The client’s preferences should be borne in mind with regard to post processing, at least as a guide.

Whilst the client liked all the images, this was the first one bought, and the largest printed!

2 x SB-800 either side of the camera, with two “shoot through” white brollies and triggered via SU-800