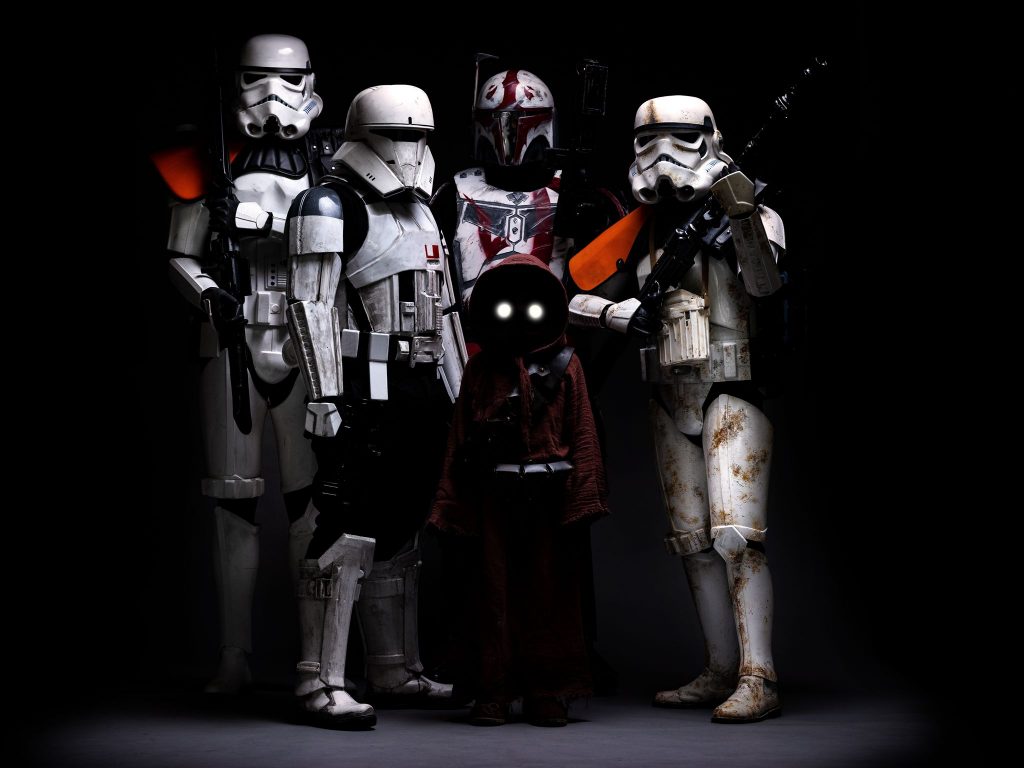 Cosplayers. Definitely a unique type of client, and not because of the costumes. They tend to have quite a special outlook on life in general. They give up an awful lot of their time for charity causes, and quite frankly, they all seem to be a little bonkers! And it’s this last trait that I love the most.

Meet the 5th Legion. A troop of cosplayers I originally met when they were recruited for a commercial shoot with Lavender hotels. We then organised this particular shoot at the studio.

My intention was to recreate similar lighting to that found on the starcruiser corridors, as seen in the film. Although I wanted it to be moodier and darker perhaps. After some thought, I decided I would go with an overhead lightsource, as used in the filmsets. This presented a couple of challenges. The first of course is how to get it there, and my solution was to make use of a boom arm. The Elinchrom ELB500 is absolutely ideal for boom work, as the head weighs pretty much nothing, and the only additional weight is the EL adaptor and the softbox itself. In this instance, I went with a 150cm Octa combined with a honeycomb. The size of the Octa meant there would be a good spread of light for a group, whilst well controlled by the honeycomb. This ensured grouos were well covered, without the light hitting the background etc. It also meant that with an individual subject, they could stand almost an the edge of the pool of light, and the width of the light source would give a very nicely diffused spread along their full height. Or something like that!

Due to the height of the boom arm, and its length, I added an extension lead to the head, giving more than enough length for the pack to sit on the floor. The output was set to 3.0 (Equivalent to 50Ws). The reason for the low output was down to a few things. The light source itself was barely out of the frame, and most of the costumes were very glossy white, so the light was very easily picked up. And finally, I was using an ISO of 400 on the GFX.

The above image was taken at 1/60th sec, but to be fair, I think I caught the shutter command dial, as I prefer to use the front and back command dials for shutter speed and aperture adjustment. And on this occasion, I think I caught it as I carried it in the studio. The shots before and after are at 1/125th of a sec. 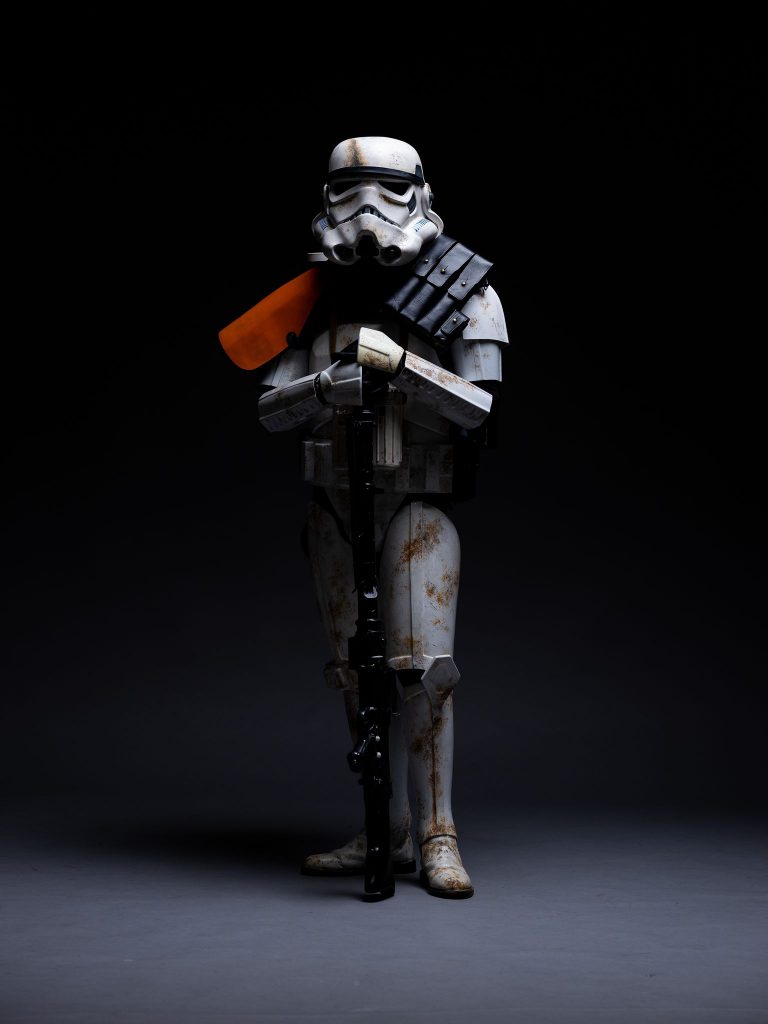 Exactly the same set up, although this time, the shutterspeed is at 1/125th, which was te setting for most of the session. Oh, and on this occasion, I appeared to have shifted the ISO by a fraction for some reason. Probably the same fat fingers syndrome as before. Meh! 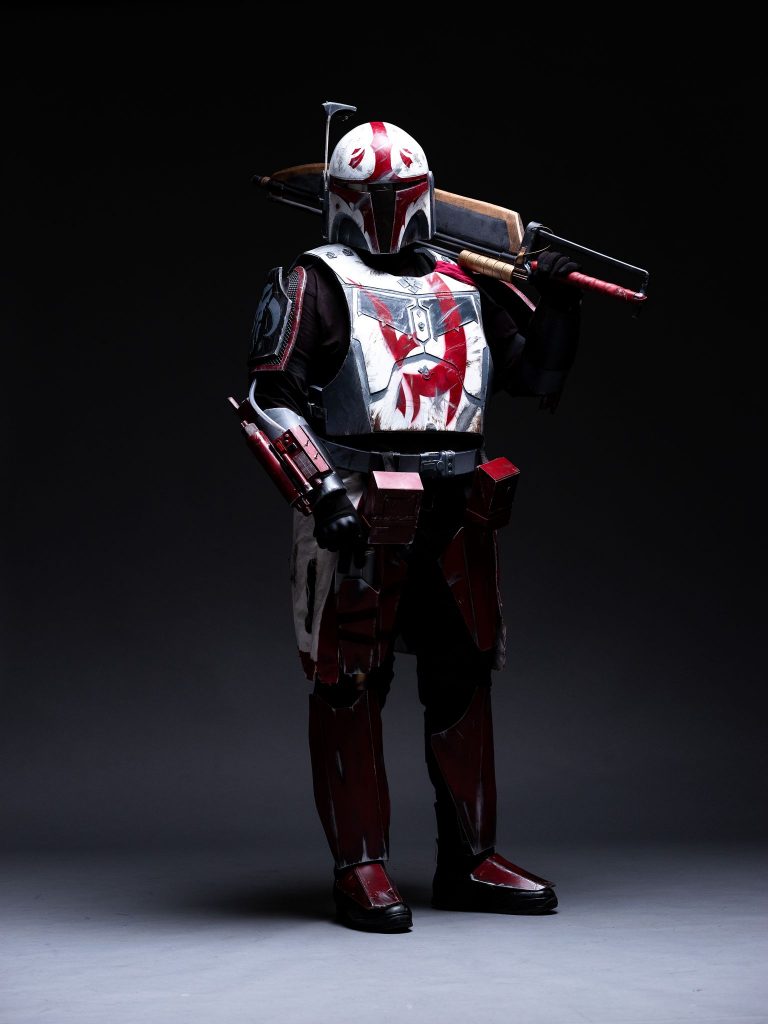 Another using the exact same lighting rig. The ISO was upped to 800 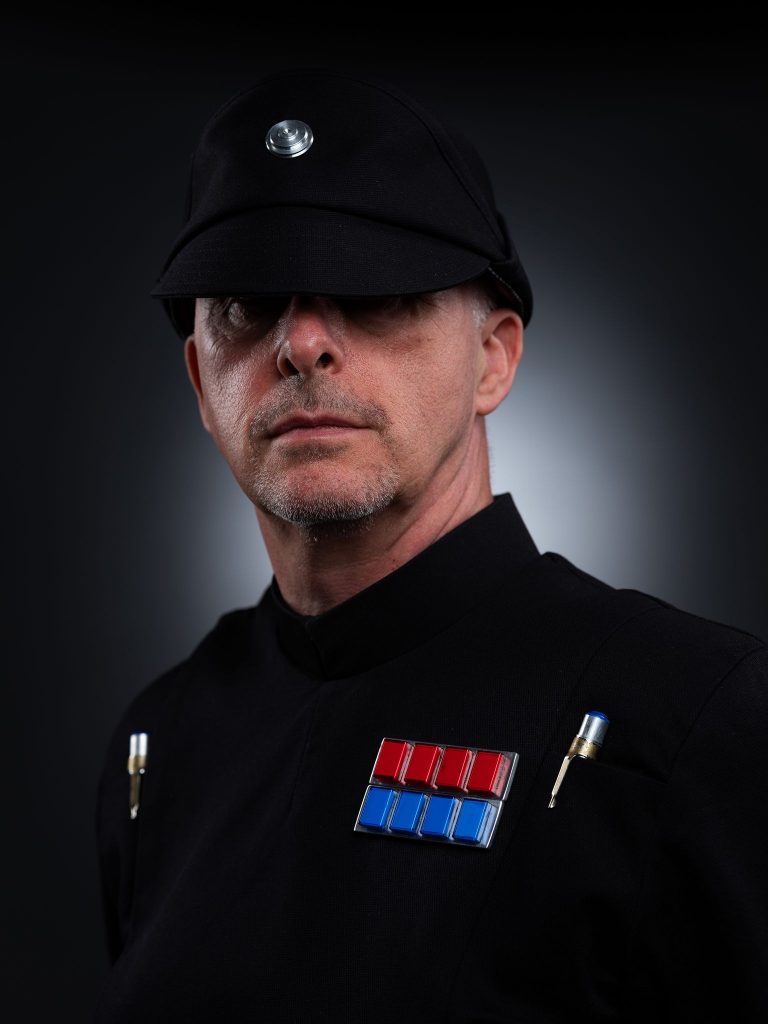 This is a more complex setup, making use of three light sources. The obvious one, is the one behind the officer, so we’ll start with that one. An ELB500 firing through a standard reflector with a 30° grid fitted. It was at a height of around four and a half feet. The output was set at 3.0 (equivalent to 50Ws) and about four or five feet from the black backdrop. The light basically overlit the backdrop, causing it to go to a light grey. Of course, there was a bit of jiggery pokery to make sure our officer was exactly central in the spot created by the background light.

The second ELB500 was positioned frame left, and further back than our officer. It was firing through a 30x140cm honeycombed stripbox. This created the accent light across his cheek, providing the texture of his skin and stubble quite nicely. The Output was set to 2.0 (Equivalent to 25Ws), as it was barely out of frame, and my intention was to ensure the accent light was fairly subtle, in keeping with the previous images.

The key light was the same 150cm honeycombed Octa, which had been moved from the boom arm, to a standard light stand. It was still quite high at seven and a half feet, and angled downward as much as possible. It was placed frame right, and almost in line with our officer and the accent light, making the lighting set up almost an example cross lighting. The output was again at 2.0 (Equivalent to 25Ws). However, as it was a little further away fro our subject (Which was mostly so it wouldn’t foul the frame, due to t he fact I was having to shoot from a fair way back with the 110mm on the GFX), it therefore contributes less light to the subject, and allows the accent light to overcome it easily. 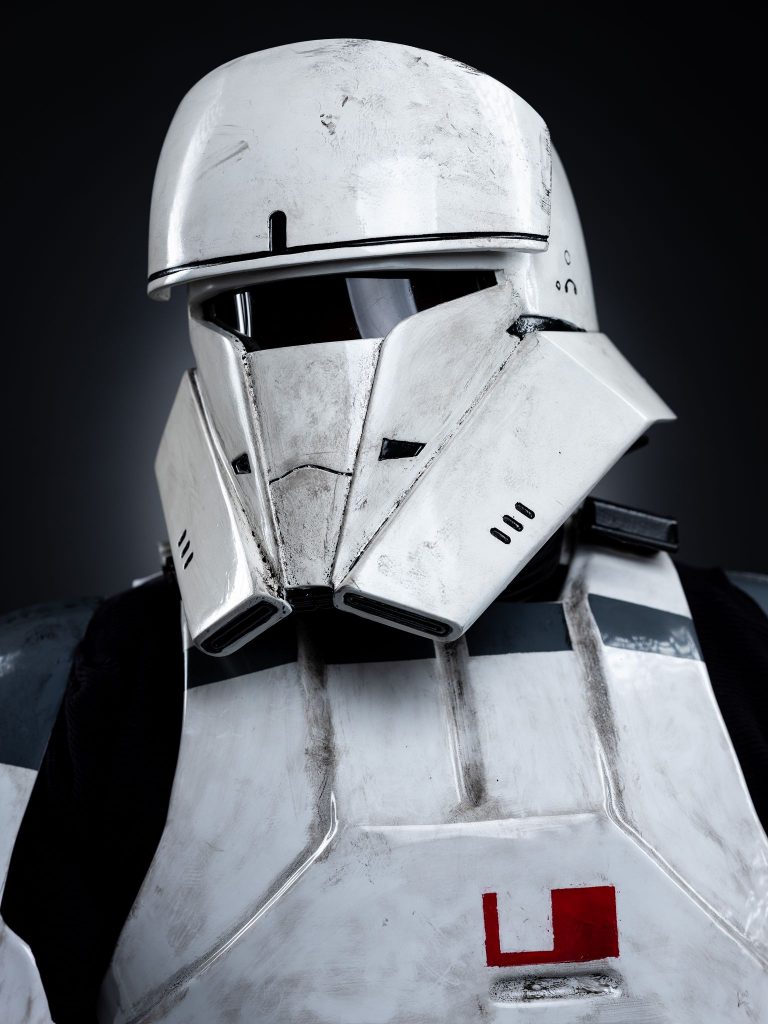 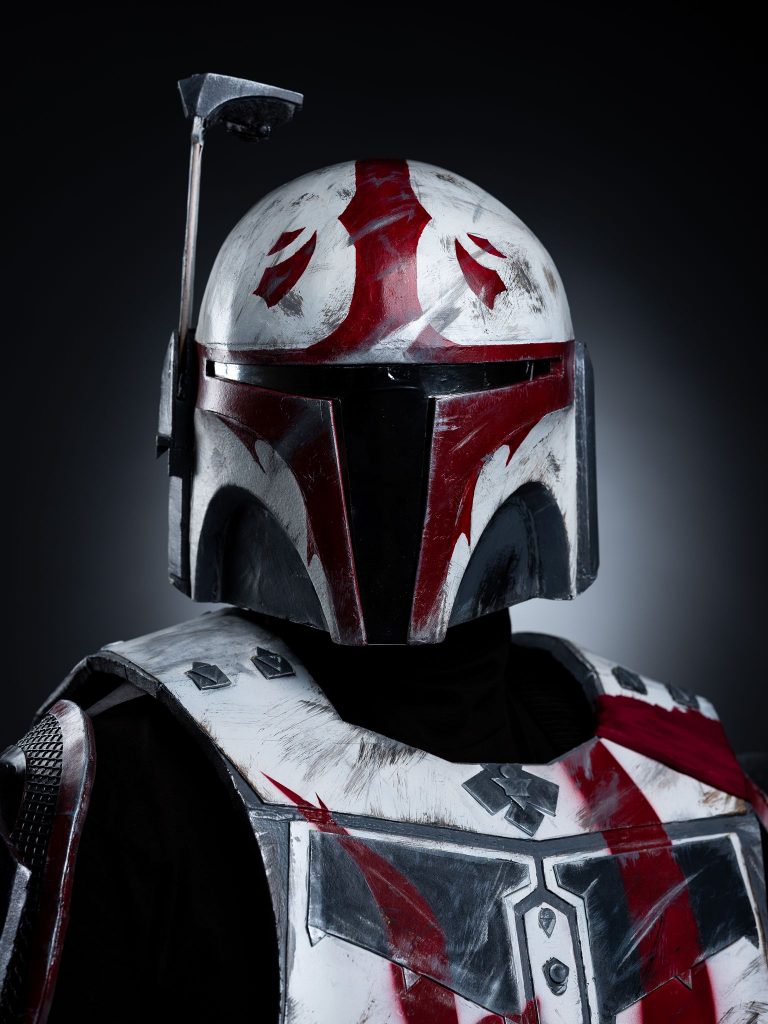 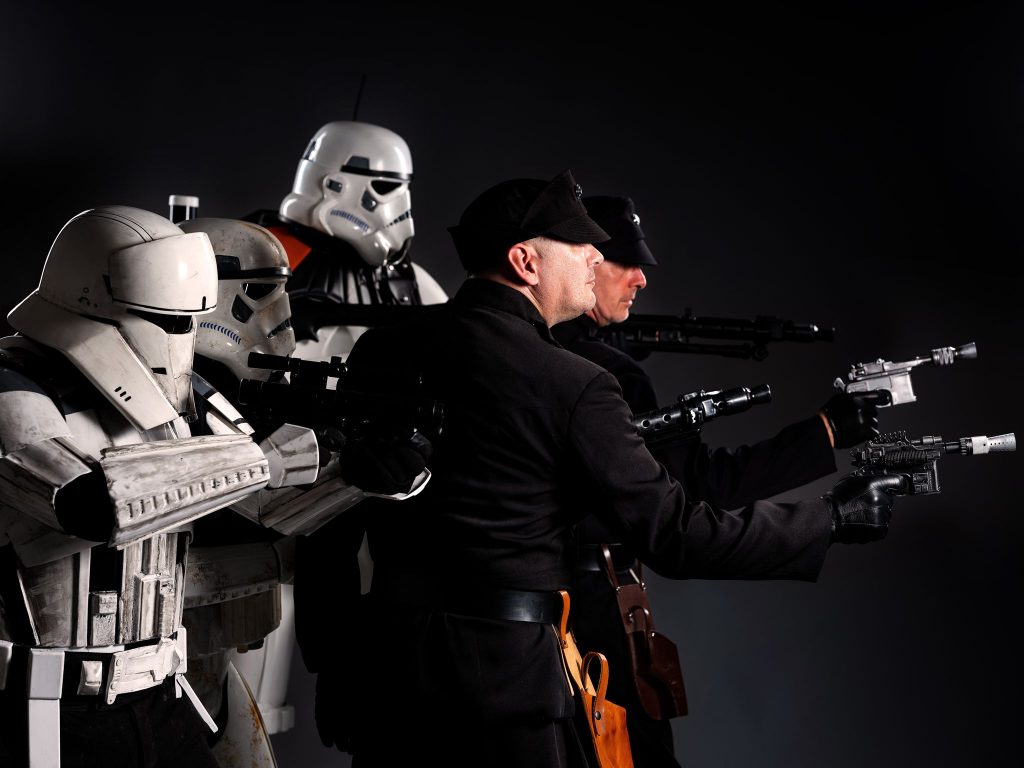 Whilst a fairly dramatic image, the lighting is a simple two light setup.

Frame right, I placed that same honeycombed 150cm Octa at shoulder height, and vertical. This pretty much meant the light was directly at them, and forward of me, to proved the general fill. It was firing at an output of 4.0 (Equivalent to 100Ws).

I also placed an ELB500 firing through a honeycombed 30x140cm stripbox frame right, and beyond our subjects. This provided the accent seen along the edge of the officers faces, and also the folds in their jackets, particularly along their arms and shoulder. The output was set to 4.5 (Equivalent to 150Ws)

The final accent light was an ELB500 placed frame left, and barely out of frame, but well beyond the subjects. This provided the finest of accents along the troopers helmets. The accent line is so fine, it could almost be described as a rim light. The output was set to 5.0 (Equivalent to 200Ws)