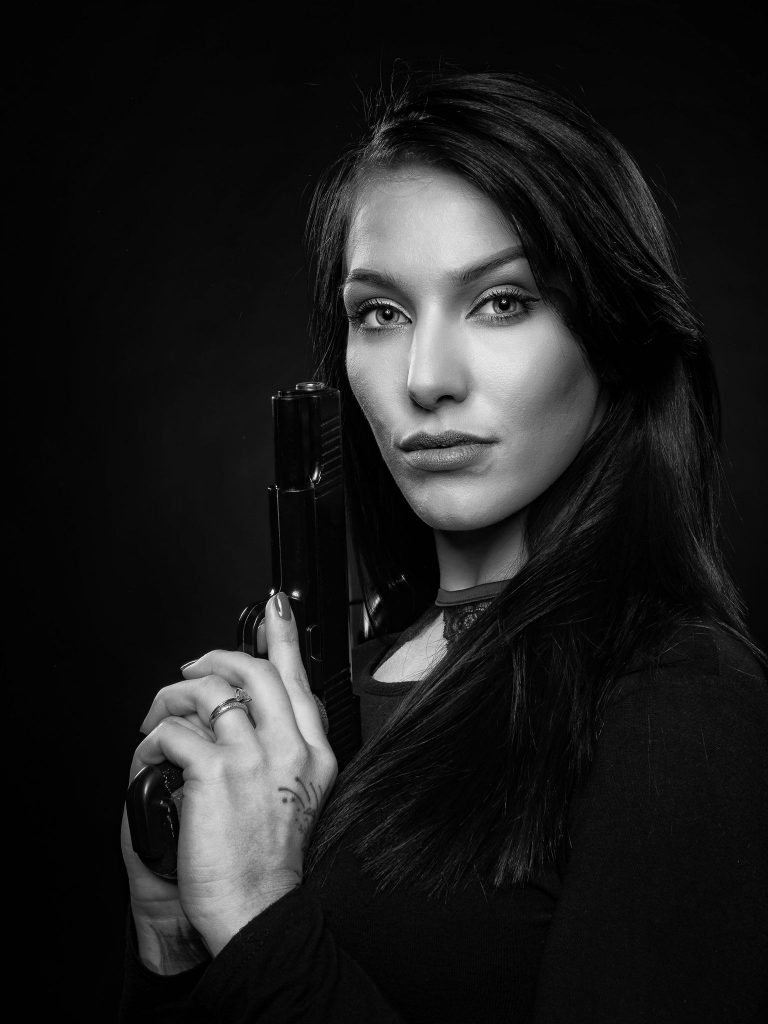 This portrait was always going to be black and white, hard hitting, and pretty much influenced by “Sin City” and the like.

Rebecca has quite arresting eyes and pronounced cheek bones. Features I really wanted to emphasise. I also wanted to ensure her dark hair didn’t disappear into the background either.

Rebecca has a good complexion which would allow me to use quite a contrasty light setup. I placed a 300Ws head frame left slightly above head height, angled down towards Rebecca. This was mated to a gridded white beauty dish. This created the texture in her hair and provided the highlight along her cheek frame left, nicely separating her skin from her hair. It also add a touch of light around the edge of her lips and the corner of her mouth, giving it shape. You will also notice the gentle accenting on her fingers. It fired at ¼ output.

A second accent light was placed frame right. Another 300Ws head firing through a white beauty dish with a grid fitted. Again it was at a height little higher than Rebecca’s head and angled downward. You can clearly see the texture of her hair and shoulder as the light skims across it. The output was again at ¼.

If you look closely, you will notice a very subtle shift in the background around Rebecca. It was a black background, but I wanted to provide just enough difference in saturation around her to ensure her hair wasn’t lost to the black background. Rather than simply put a gridded standard reflector onto the background, which would still be fairly bright on its lowest setting,; I chose to use a red gel’d light with barn doors fitted. Yes, one of those ten a penny jobs we see day in and day out on ebay. One of them.

Anyway, the idea of using the red gel is that a black and white conversion would cause the lit area to be less contrasty with the black background. This was a 200Ws head at 1/16th output

The key light is a 600Ws head firing through a 70cm white beauty dish with a grid fitted. It was pretty much alongside me and as high as the stand would go. You can see the reflection in Rebecca’s eyes. It was set to be straight on to her face, as she is ever so slightly turned away from me. This ensured her cheek bones, nose and lips would cast the shadow I wanted, to enhance the shape of her face. Output was set to 1/8th

And that’s pretty much it.

Rebecca is based near Wakefield and will travel.

She can be contacted via her facebook page here.

She can also be found at Purple Port : http://purpleport.com/portfolio/rebeccajane301/