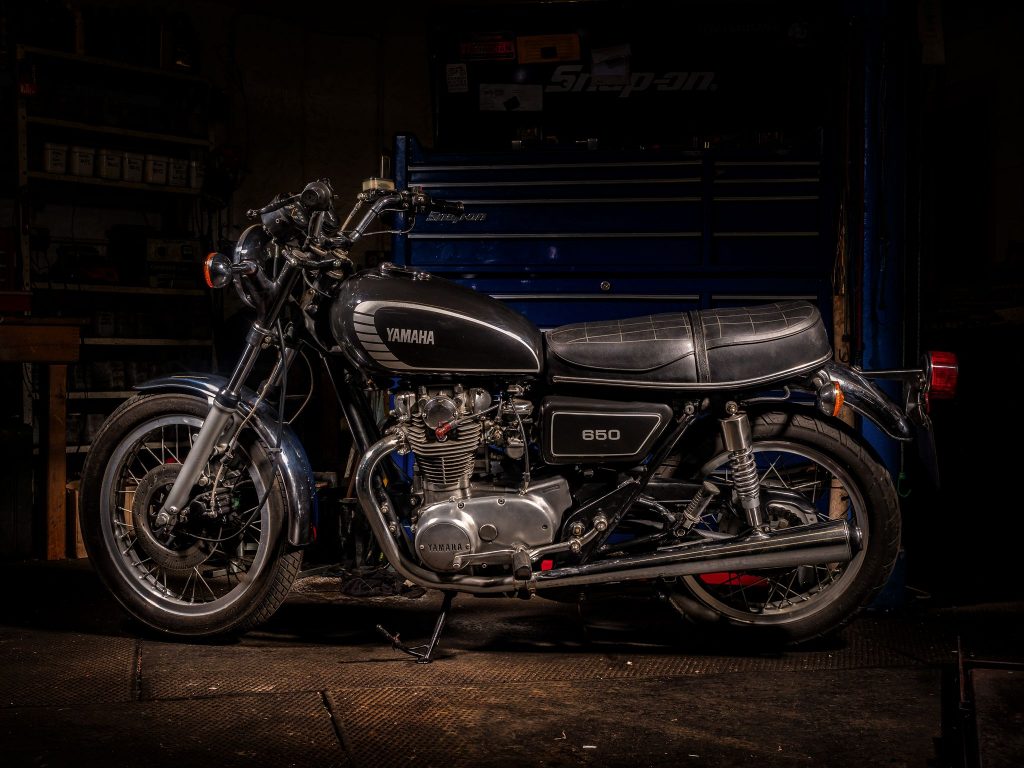 Having had my first shoot with the ELB1200, I wanted a complete change of subject and challenges for my second shoot.

I had previously dragged John, a local motorcycle mechanic, into the studio for an impromptu portrait shoot whilst reviewing the Mcoplus LE-R320 Tubelight. Obviously, kidnapping a chap tends to come at a price, so I agreed to photograph a few of his motorcycles for him. As a side note, he still thinks photographing his bikes was his idea.

I was to photograph his classic bikes, all from the 1970s, and all “as is”, rather than restored to showroom finish. I felt it would be in keeping with both John and his bikes, if I photographed them in his garage, although without too much of the clutter associated with a garage impacting on the frame. This would easily be achieved by ensuring we were shooting well above the ambient, and controlling the fall of light to illuminate exactly what we wanted, allowing the rest of the surroundings to fall to deep shadow.

The first bike, pictured above, is a Yamaha XS650 from 1979. It was placed about two feet in front of the two chest, and parallel with it. I placed the Elinchrom ELB1200 unit frame right, with a Pro head firing through a gridded 65° reflector. The stand was raised pretty much as high as it could go, within the confines of the garage, so about 7.5 feet high. It was firing at an output of 4.0 (Equivalent to 100Ws)

Frame left, I placed an ELB400 with an Action head, again firing through a gridded 65° reflector. The stand was raised to about six feet, and the output was also set to 4.0 (Equivalent to 100Ws)

The high shutter speed ensured any ambient was completely shut down, so any light registering would be from my two light sources. The grids on the reflectors restricted the light to a pool around the bike. Yes, there is a small amount that catches the tool chest behind the bike, which is fine. I don’t mind providing a hint of the garage environment, I just don’t want it to take attention away from the bike itself.

Once I felt I had the settings as I needed, I then also took an image either side of my chosen exposure. One at ISO64 and one at ISO400. The shutter speed and aperture remained the same. This allowed me to blend the image in post, giving more dynamic range to the finished image, and therefore increasing the range of detail. 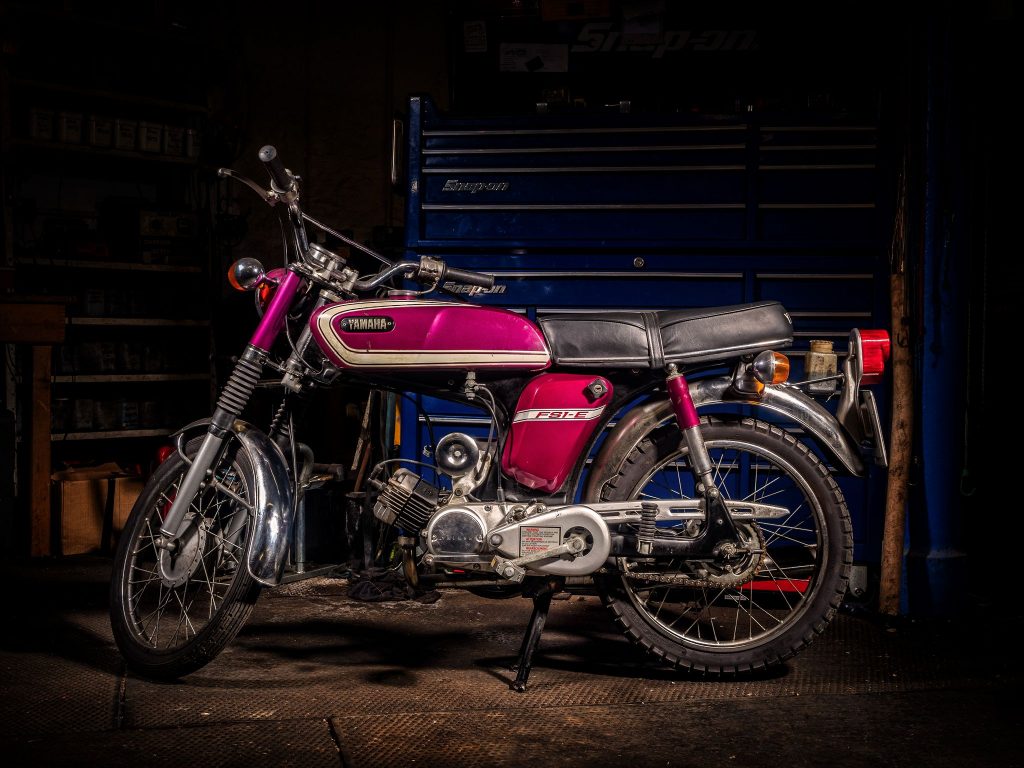 This is a 1974 Yamaha FS1E, shot in a similar manner to the first image. The lighting hadn’t changed, but I found the tank and side panel appeared brighter in the teat shot, so increased the aperture to F7.0 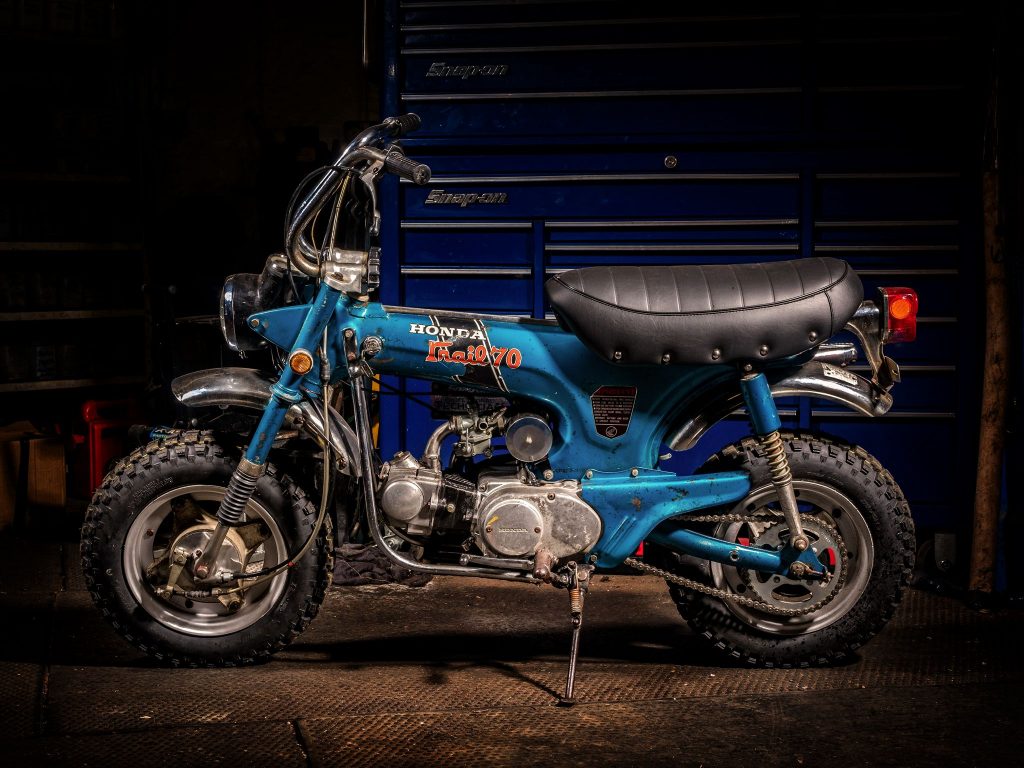 The final bike is a 1970 Honda CT70, which were fondly referred to as Monkey bikes in my youth. I found I had to increase the aperture by a third again, bringing it to F8. The light locations and output remained the same, and I used the same three exposure bracketed technique to create the final image. 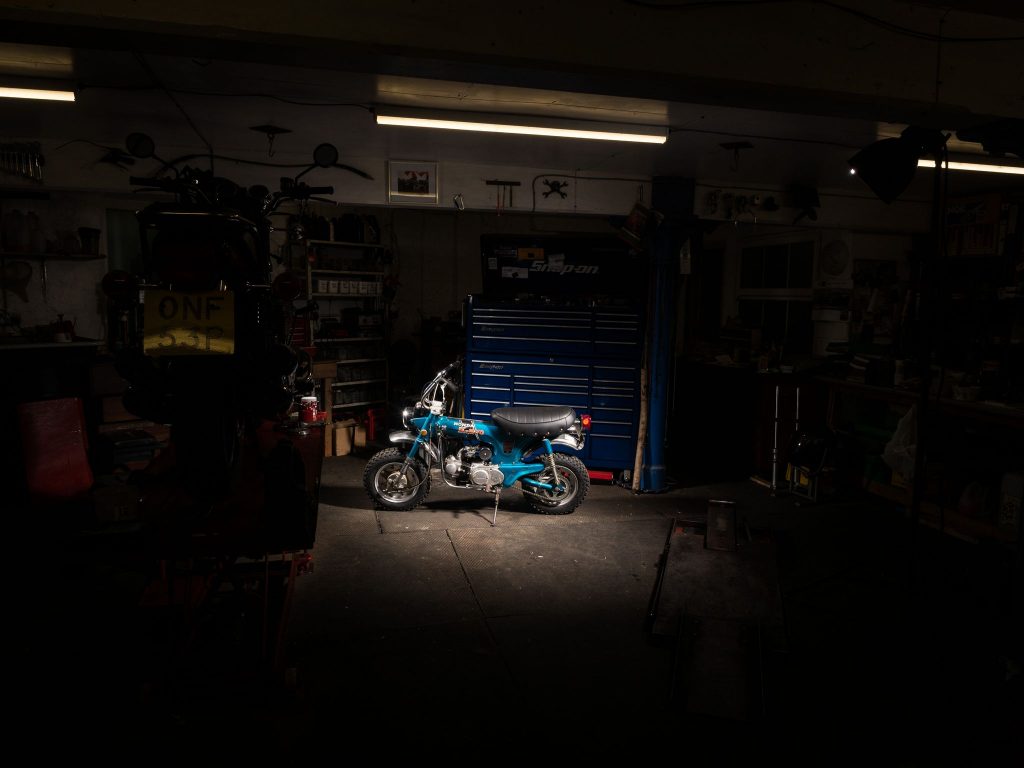 This is a pull back, showing the effect of the pooled light around the bike 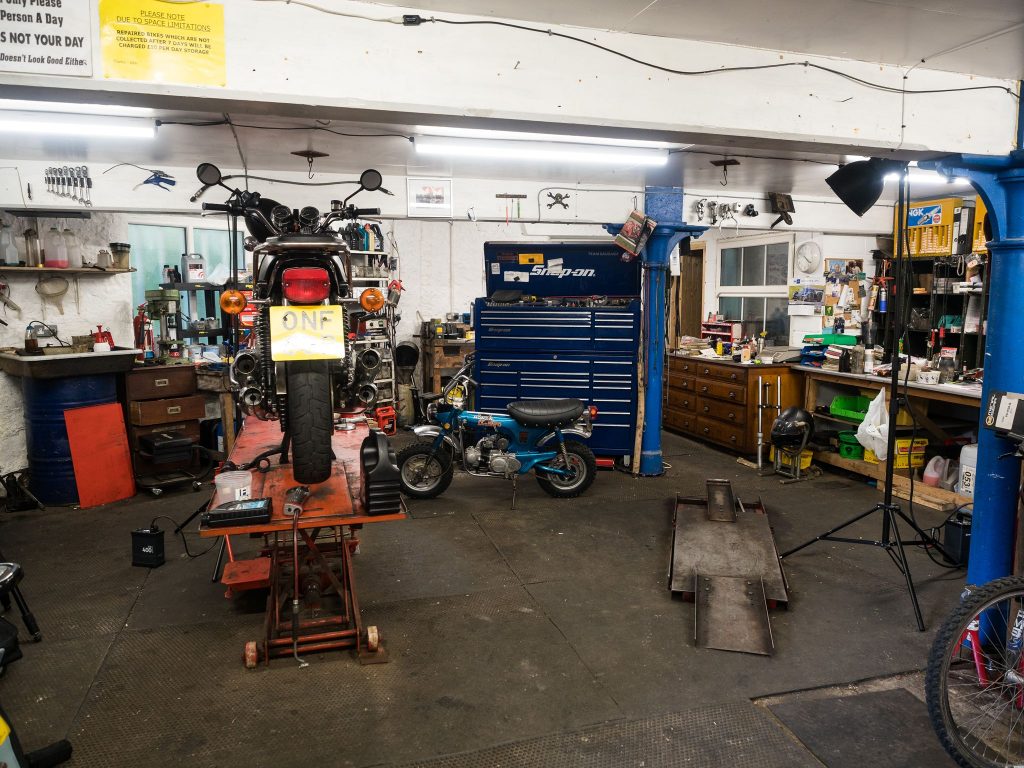 And this is the same scene, shot under programmed mode to give a better idea of the work area and lighting setup. The ELB1200 can be clearly seen frame right. It’s a little more difficult to see the ELB400 frame left, but if you look at the top of the bike on the platform, you can see the reflector the other side of the handlebars.

Photographing motorcycles, or in fact any type of vehicle, is extremely rewarding. Whilst they bring their own challenges, especially the larger vehicles such as trucks, I find that automotive photography is one of the few genres I thoroughly enjoy. So much so, I’m not entirely convinced it can be called work!