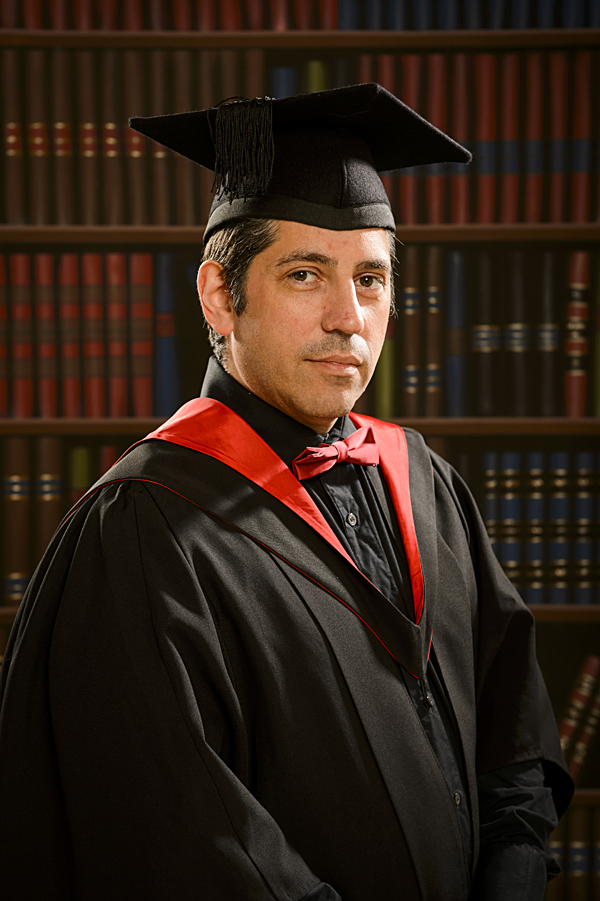 Some of you will recognise Wayne, one of the photographers working with me. Yeah, I know he looks a little younger here, and there’s a reason for that.

This was pre beard, and it was eighteen months ago when he qualified.

Wayne asked me to do his graduation portrait, and seeing as he works in a studio, you may be able to understand why.

The bookcase behind him is a painted backdrop. One of those old style, heavy canvas backdrops. Which is great, as it doesn’t wrinkle when stored, but also makes it quite heavy for the size of it.

Now, one thing to bear in mind with painted backdrops, you don’t want folks pointing it out. Very simple to avoid, to be honest. I just ensured there was enough distance between Wayne and the backdrop, and then used a shallower depth of field than usual. In this case, f5.6 at 70mm on a 24-70mm zoom would give enough depth of field for Wayne to be nice and sharp front to back, but would soften the backdrop sufficiently to smooth away any obvious flaws in the paintwork.

I chose to use a very simple three light setup here. Frame left, and a little further back than Wayne, there’s a Lencarta Elite Pro 600 firing through a 40cm gridded beauty dish at an output of 1/16th. This is providing the accent light across his shoulder, his hair and also the left edge of his mortar board. All of which separates him from the background. It also nicely clips the edge of his jaw, defining the shape of his face.

Frame right, and not quite as far back, is a second Elite Pro 600. This is also firing through a gridded beauty dish and is serving to shape Wayne’s face further. Because it’s a little forward compared to the left accent light, it illuminates a little more of his face, and more importantly, it also defines the gown across his chest. It was firing at 1/8th output, as it was a little further away.

I used a third Elite Pro 600 as the main light, firing through a Pro Fold 150cm folding Octa with an output of 1/8th. I particularly only wanted the one main light, as it would tie in with the background.

If you look carefully at the background, you will notice the highlight painted onto the book spines are all central, indicative of a single central light source.

I also chose not to light the background, allowing it to darken, and therefore keep the attention on Wayne.

Strange, isn’t it? It’s not often I see Wayne being serious. And anyone who knows Wayne will undoubtedly be wondering how long it lasted.

Oh, about ten minutes, which is pretty good for him 🙂 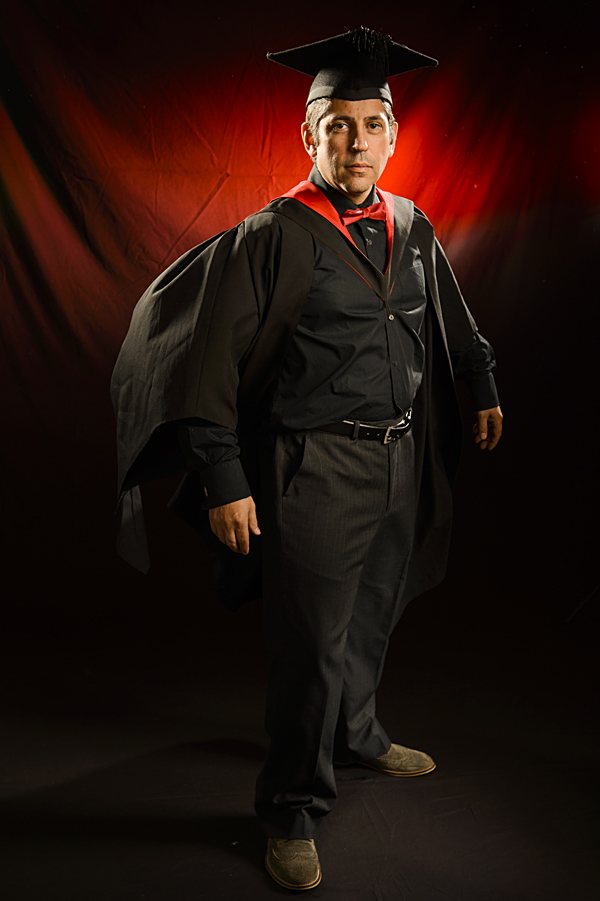 We moved into one of the other studios set up for black. The position of the two accent lights is pretty much the same, except the beauty dishes were swapped for strip boxes. The one left of frame is a shorter box, at about 140cm long. The one frame right is much longer at 200cm, so as to provide an accent light head to toe, literally!

No honeycomb grids were used here, so the output on each head needed turning down slightly, but not as much as you might think, as the heads were actually a little further away from Wayne here, so as to keep them out of frame.

The red splash behind Wayne is simply an Elite Pro 300 on a short lightstand, firing through a gridded standard reflector with a red gel taped in place. Output was set to ¼.

Main light is just camera right, and is again through a 150cm Pro Fold Octa at 1/8th output.

The billowing gown was achieved with a floor standing large fan.

Yes, this was the start of Wayne returning to form. I should have seen it coming. 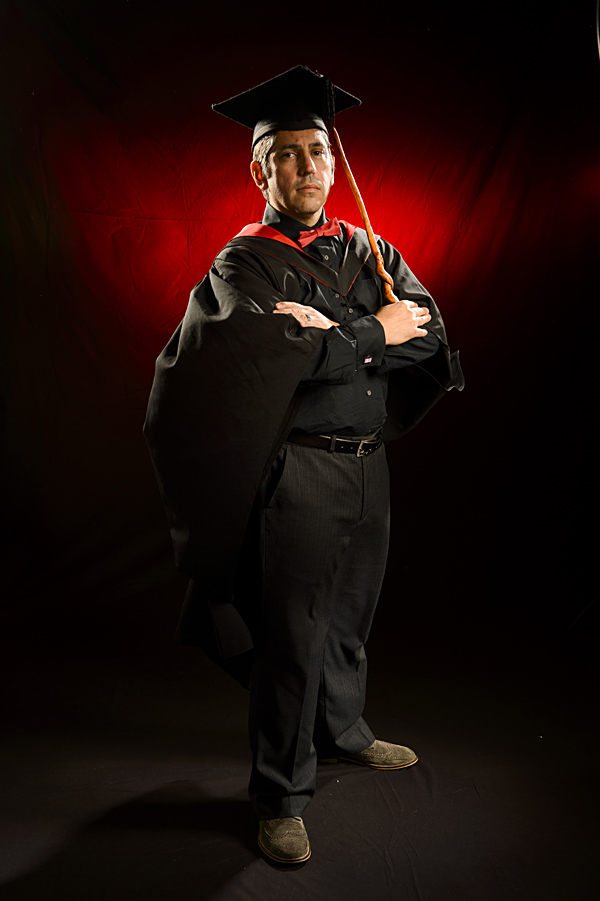 “Can we do Harry Potter?”

What could I say?

I couldn’t really say no, could I. Have you seen a grown man cry? It ain’t pretty, I can tell you.

Lighting set was unchanged, just the addition of his wand. Which, I might add, I had real problems prying from his hands after the shoot!

Joking aside, I know how much effort Wayne put into that course, and also the top up course for his BA(Hons), which he completed Summer 2014.