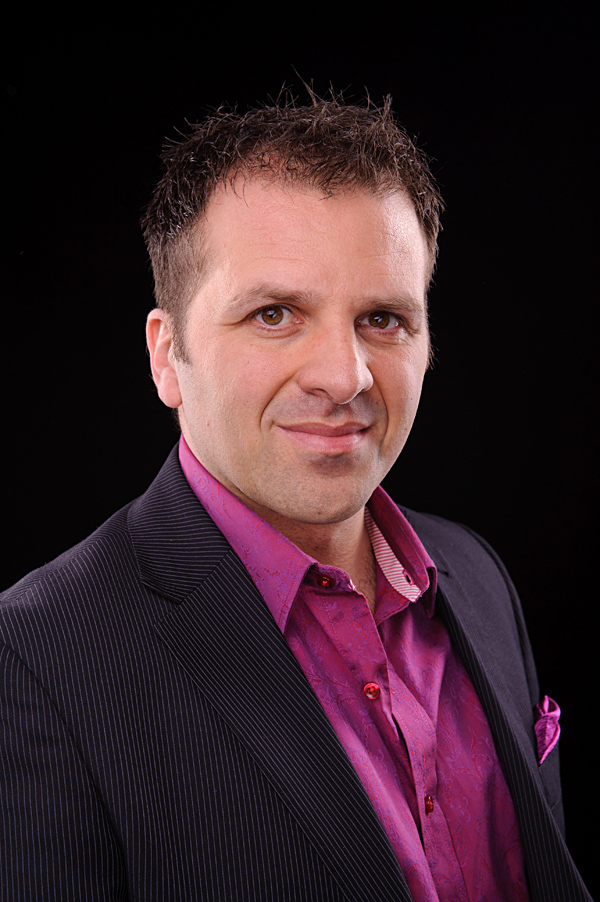 Meet Allan Vincent, a photographer from the Chorley area, who needed a headshot for his various social media outlets, and whilst he was at the studio, photographing his gorgeous daughter, I nailed his feet to the black backdrop and took my chances 🙂

I chose black due to Allan’s very healthy tan and dark suit. The contrasting shirt would also stand out very well.

I didn’t want to over dramatise the portrait, as it wouldn’t sit well for some of the social media outlets such as Facebook or LinkedIn, although it would work well for a website.

Anyway, to even the light off a tad, I used a four light setup. At the rear and camera left, I had a Lencarta Elite Pro 300 firing through a 200x40cm stripbox, separating Allan’s suit from the background. It was set to ¼ output and provided the accent light to his right cheek.

The accent light to his left cheek was provided by another strip box, again coupled to an Elite Pro 300 at ¼ output.

The main fill light was an Elite Pro 600, firing through a 70x140cm softbox, on camera axis and above camera in landscape orientation. It was firing at 1/8th output. A secondary fill was provided at a lower height by another Elite Pro 600 and a 120cm Octa. This was slightly further out and was closer to ¼ output.

Not an awful lot to it, but the emphasis needed to stay with Allan, rather than the lighting in this instance.

Allan can be found at Lake Creative Studios in Chorley.

Incidentally, my own wedding work can be found at www.weddingsbymichael.co.uk