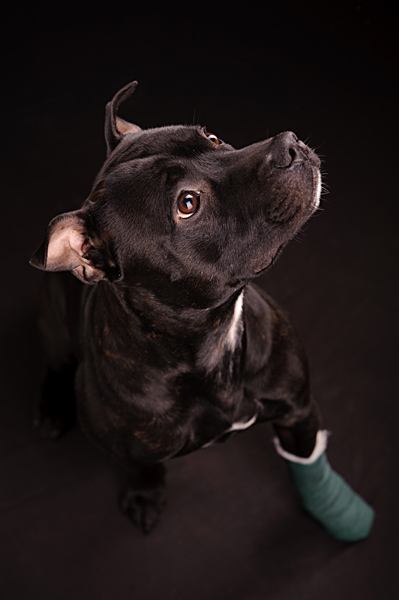 This was an unexpected opportunity. It was actually an engagement shoot for a young couple who brought along their dog, rather than leave him at home. I love animals, and I just can’t help making a fuss of any dog brought to the studio. They’re all such characters and full of fun, and this chap was certainly that. How on earth could I not photograph him?

Studio three was set up for black, and seeing as we were in there for the couple, it was quicker to grab a couple of shots of our friend here, than move to one of the other studios. He was certainly settled, as he’d already explored every inch of studio three, and moving into another studio would only have initiated another “hoovering” session as he would run his nose over every surface he could find in the new room. The lights were pretty much where they had been placed for the couple, and hadn’t really changed, other than to point down or be lowered.

The rim light was provided by a gridded stripbox behind our friend, and camera right at about ¼ output on an Elite Pro 300 head. The top of his head was lit by another Elite Pro 300, firing through a second gridded strip box camera left and further back than our model. Still at ¼ output, but due to the increase distance, having a reduced impact on his dark coat.

Main fill was from a 70x140cm softbox attached to an Elite Pro 600 and firing at just under ¼ output.

The main challenge was ensure the detail within his coat was brought out, without lighting the floor extensively. If the shoot had been specifically for the dog, I would have used a gridded beauty dish to tightly control the main light, and probably quite tight grids and standard reflectors for both accent lights. However, this was an opportune moment in the middle of an engagement shoot, and you basically have to make do with whatever you have to hand, or lose the opportunity.

And yes, the little tyke has his leg in plaster! 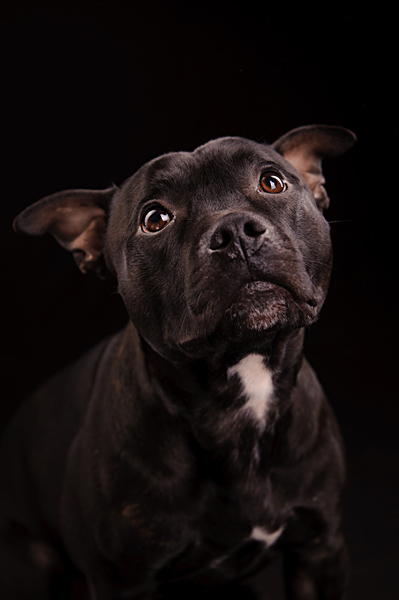 Exactly the same setup, just a quickly grabbed shot as he turned at the sound of the shutter.

I wish I could remember his name.

Many thanks to Tom and Siobhan for bringing him along, and making my day 🙂