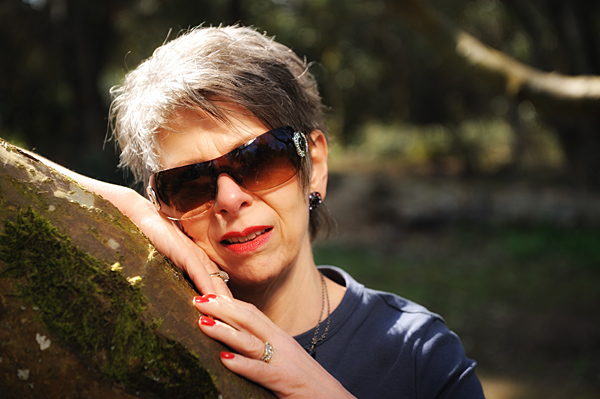 In a follow up to Stuart Little’s blog entry regarding our meet on the 11th and 12th April, ( www.alittlephotoshop.com/friends/guess-who-popped-by-for-… ) I thought I’d post one of my shots from the very brief shooting session we had together (although I had no idea Stu was being sneaky behind my back, taking the “work in progress” shots!

Anne finds it very uncomfortable to be without sunglasses on bright days, and I’m not even talking sunny here. Eye glasses pose all sorts of problems, and you wouldn’t believe some of the so called “advice” I’ve heard photographers give, when trying to overcome these issues (I once overheard someone advising the removal of the lenses, would you believe!).

Of course, the main bug bear is reflections of light sources, and there are a number of tricks to circumvent this. The first and easiest is to tip the glasses slightly down, and this can work in most cases. Failing that, take careful note of the light path, remembering light travels in a straight line and glass reflects like a mirror. Simply position your subject so the light doesn’t reflect directly back at the camera, or move the lights accordingly.

However, Anne loves to make things difficult for me, and she manages it rather well. Stu will testify Anne’s glasses were a pig of a problem, because they were convex and could pretty much reflect anything from anywhere! We were using Stu’s reflector (which was damned big, in fact huge!) and that in itself, caused major problems as it could be seen from pretty much anywhere in Anne’s sunglasses.

I love a challenge, and I prefer to find a way of solving a problem, rather than circumventing it, it’s just the way I am. The downside is, it can take a lot longer to get the shot. The upside? Well, I get a shot I actually wanted, and I usually learn something in the process.
Then again, sometimes time is just not on your side.
In this case, the sun was over Anne’s right shoulder, providing a nice rimlight and also softening her hair and outline a little. Stu’s windsurfing reflector was held camera right, but was readily seen in Anne’s sunglasses. By raising the reflector as high as possible, the reflection became nothing more than a highlight along the top edge of the left lens (Anne’s left), but provided the essential lighting behind the lenses that just lifts the detail in Anne’s eyes.

The image was processed in Nikon’s Capture NX2, with a touch of glow added for glamour (I have to stay in Anne’s good books, and this may be worth a brownie point or two).