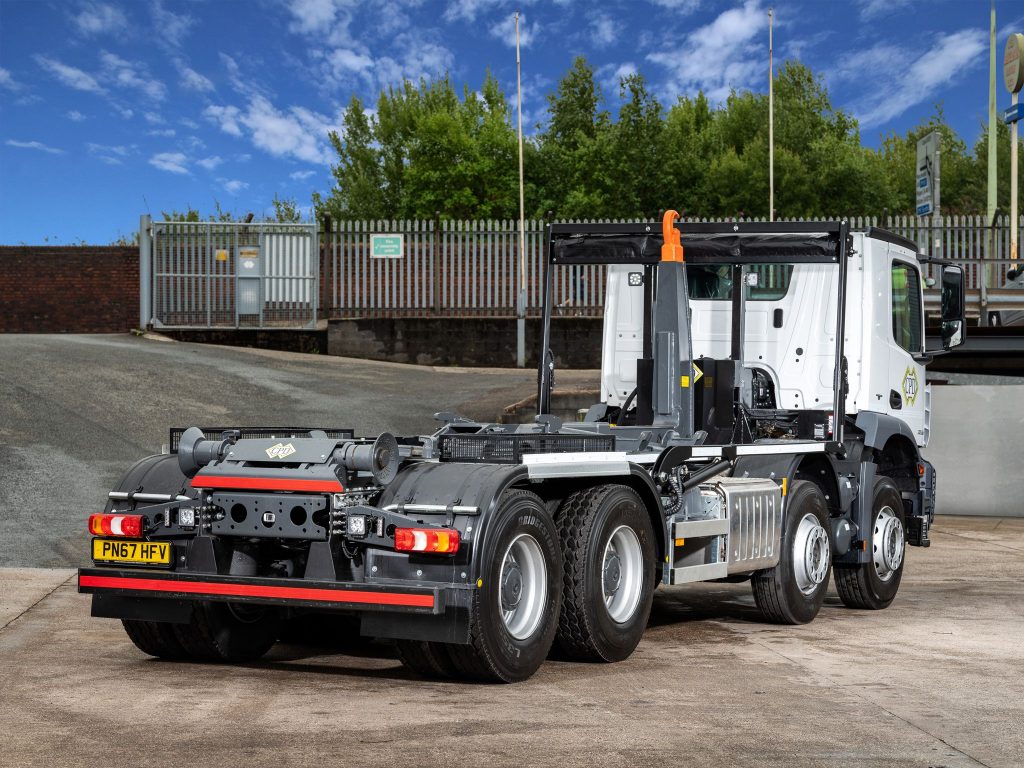 CP Davidson are based in Chorley, and build custom lorry back ends, such as the skip hook adaptation pictured above. Therefore, the photography needed to concentrate on their work (The adaptation) rather than the cab. Obviously, the cab is the pretty bit, but the hook assembly is what they do, and what they sell.

I used two light sources here. The first was placed frame left, and straight on to the back end of the truck. I used an Elinchrom ELB500, firing through a high intensity reflector at a height of seven feet and angled towards the roller assembly. Output was set to 5.0 (equivalent to 200Ws). The high intensity reflector is quite a deep and narrow modifier, which focuses the light on a smaller area, and a by-product is the fact the light is intensified. This gives you a 2.5 stop advantage when compared to a standard reflector.

The second light source was placed frame right, and again, it was another ELB500. This too, was firing through a high intensity reflector at a height of seven feet. This particular light source needed to be a little further away from the vehicle, to avoid fouling the frame, and this meant the output needed to be at the maximum of 6.3 (Equivalent to 500Ws).

Okay, did anyone spot the interesting shutter speed, and start rubbing their head?

The official x-synch for the GFX 50s is 1/125th of a second (yawn!). Now, the first thing I tend to do when I get a new or updated camera, is to see how the shutter curtain impacts on the frame when muckin’ about just above the x-synch speed. It’s nothing fancy, I just fire a head at a blank wall and start at the x-synch speed, and try one, and then two clicks above it. (1/160th and 1/200th sec).

So, getting back to the GFX. On testing, I found the curtain shadow was at the top of the frame. Bonus!! This meant that my subject wouldn’t be impacted by the shadow if it was lower in the frame, and I was shooting landscape orientated.

Whilst the x-synch is quoted as 1/125th sec, I found that 1/160th sec left a narrow shadow across the top of the frame. 1/200th sec was kinda pushing it a bit, but doable if my subject was in the lower 2/3rds or ½ of the frame. When using 1/200th sec, I would check the test shot very carefully to see if there was any impact. But at 1/160th sec, I’d be really unlucky to have any issue. 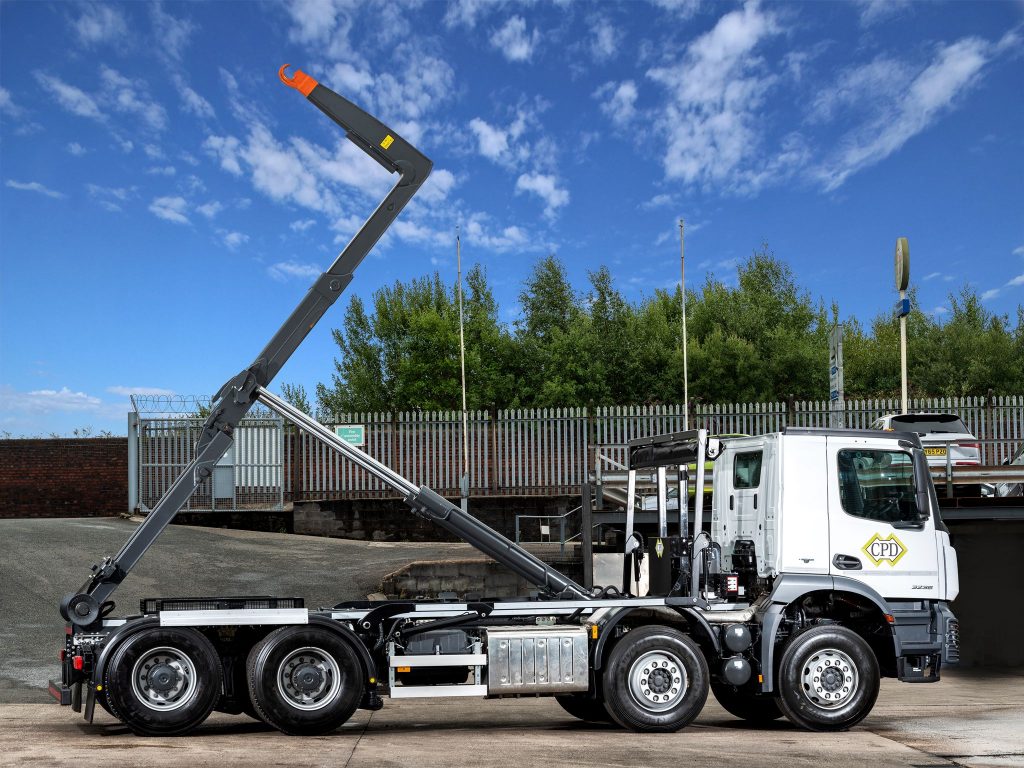 The first light source (ELB500 with high intensity reflector), was frame left, at seven feet and firing at 5.0 (Equivalent to 200Ws). It was firing around 45° to the side of the lorry. You can see the highlight on the tyres. The second ELB500 with high intensity reflector was placed frame right, again at 45° to the side of the lorry, and firing at 5.0 (Equivalent to 200Ws). Because the hook arm is raised, I knew it would likely be within the curtain shadow if I was pushing past the x-synch speed. For that reason, I dropped the shutter speed to 1/125th sec to avoid any loss of flash on the arm itself. However, when I checked the image, I found I wasn’t getting any highlight on the arm above the hydraulic joint. The high intensity reflectors didn’t provide a wide enough path to hit the top of the arm, as well as the tyres and floor etc.

I set up a third ELB500 and high intensity reflector, and placed it alongside the one frame left. Output was again at 5.0, and it was aimed solely at the upper section of the hook arm.

I find automotive, or vehicle photography, particularly enjoyable. It’s taken me to some wonderful places, including Cumbria and the Lakedistrict. Now, if you want some real eye popping backdrops for car or motorcycle photography, you really do need to go and take a look. The challenge of larger vehicles such as lorries, buses or trucks make this type of work all the more enjoyable.