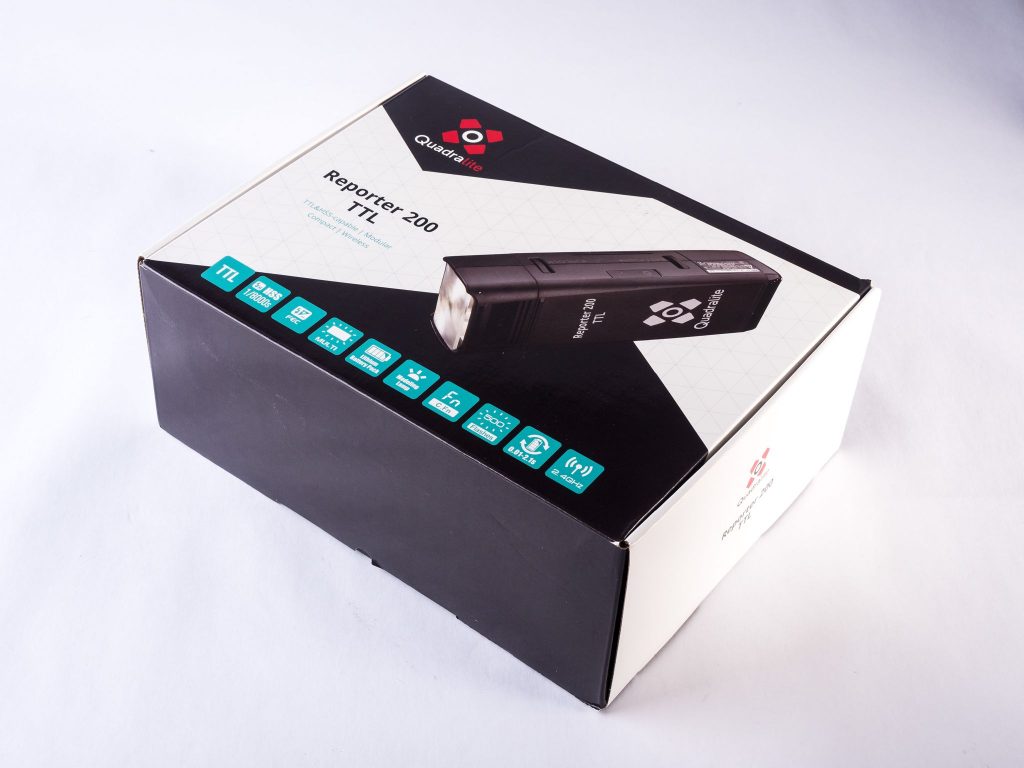 My location kit consists of high powered battery strobes. That said, I do tend to pack half a dozen speedlights for fill and the like, and it’s surprising what you can get out of a speedlight when needs must. Now, considering my location kit is “mature”, and does everything I need, it doesn’t stop me casting a sidelong glance at some of the gear that I see advertised online, such as the Quadralite Reporter 200 TTL and it’s various incarnations. This one came from Pixedo,

[https://www.pixedo.com/en/] and arrived extremely quickly and well packed. What made me push the button after so long? Well, I’m an Olympus shooter, and the possibility of radio linked TTL was intriguing. The Reporter 200 is not system dependant, as it has no hotshoe. Instead, it receives it’s TTL instructions, or any communication, via a system dedicated transmitter, such as the Navigator X. Obviously, mine was for the Micro Four Thirds system. 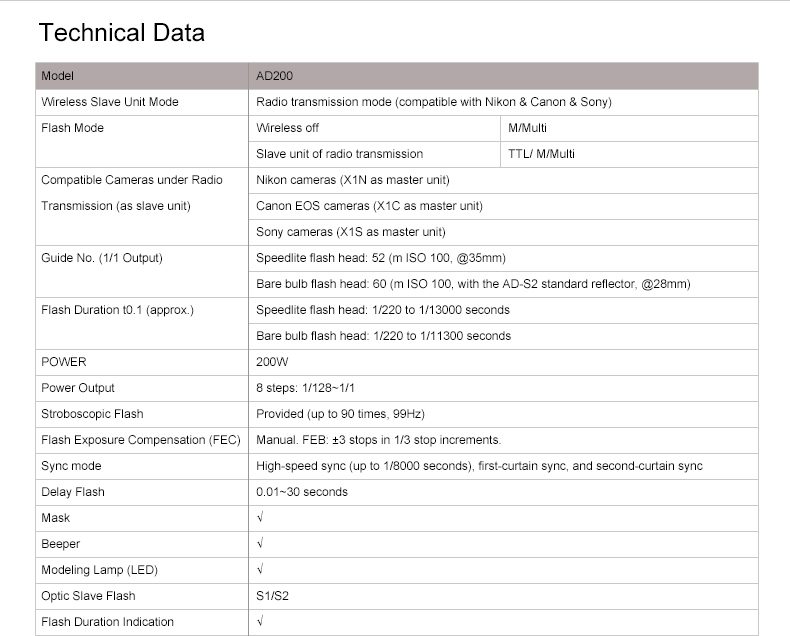 I very, very rarely use TTL, preferring the absolute control afforded by manually setting my lights to get the image I envisage. The only time I use TTL is in a run ‘n’ gun scenario, such as a wedding, although I revert to manual for the portrait session. I currently use a Metz 64 AF-1 for my wedding stuff, mainly because I can attach an external battery pack which really cuts down on the recycle time. I have to say though, ultra quick recycling seems to be far less of a requirement nowadays, so I’m not sure if my shooting style has relaxed a little compared to several years ago.

The one fly in the ointment with the Metz for TTL is the fact it isn’t always consistent, and this is the ache at the back of my mind each time I see any other Olympus compatible TTL enabled speedlight. The radio communication and promised higher power output of the Reporter 200 was my Achilles heel, and after months of lusting, I apparently gave in one evening. Or that’s what I assume from my order confirmation email I found the next morning. The Quadralite reporter 200 was a little cheaper than my Metz, which made me feel a little better, although it didn’t raise my confidence enough to tell my wife. 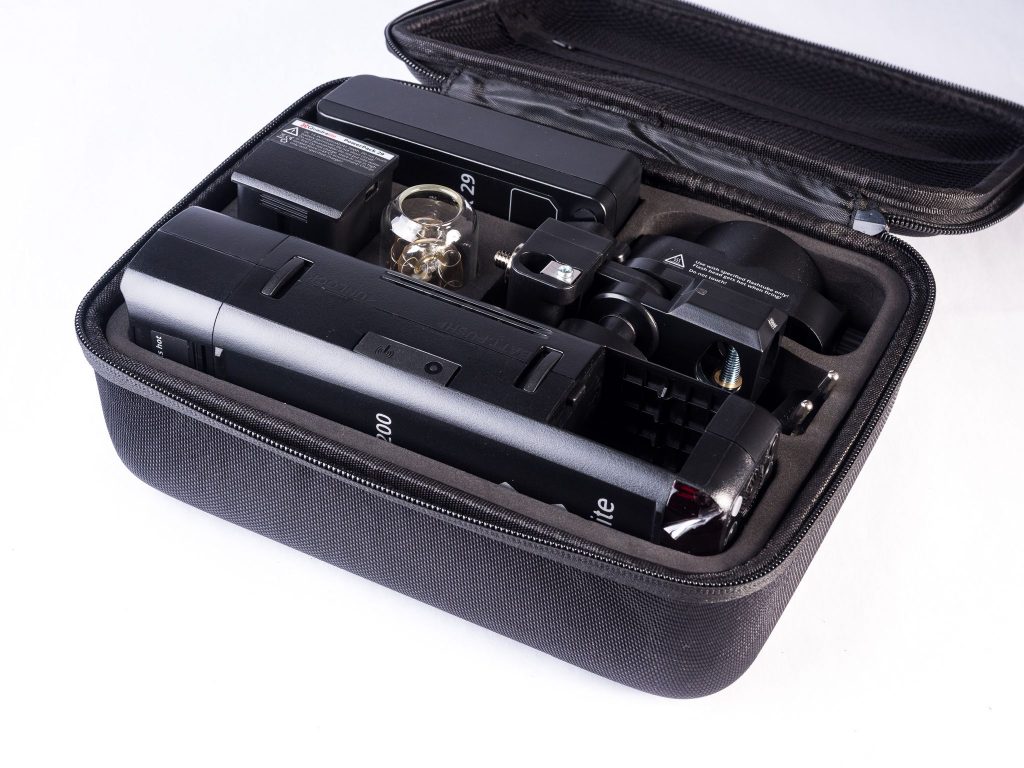 Inside the box, I found a very substantial case. The Reporter 200 came with two interchangeable heads. A fresnel, speedlight type head (none zoom), and a bare bulb type head. There is a third head available, which is an LED constant light head. Now, whilst I was initially intrigued by the possibility of switching out my speedlights for the Reporter 200, the potential of the bare bulb head had not escaped me. 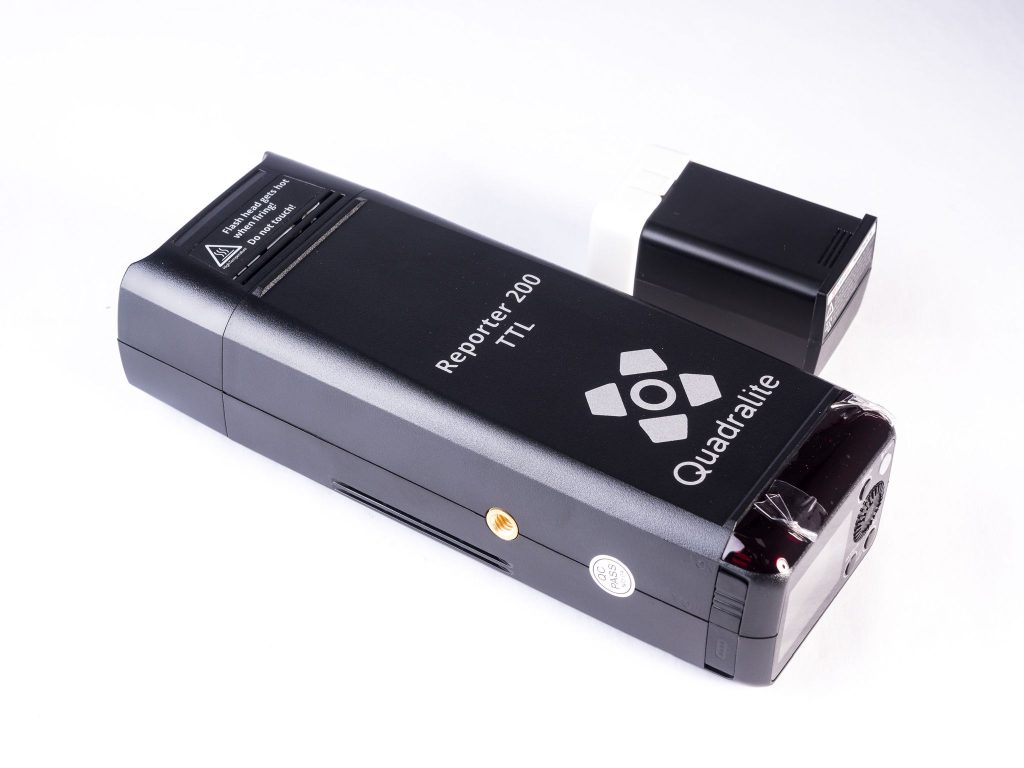 After charging the battery and slotting it home, I attached the speedlight head. Whilst it was heavier than a speedlight, it still came in under 900gms and felt absolutely solid. I think the solid feel comes from a lack of rotating and elevating head, such as you find on a standard speedlight. So there’s no movement, creaking or weak point. It’s basically a brick with a bright end. Very reassuring. It’s only a little longer than my Metz, so will fit in my camera case, no problem.

What about the transmitter. 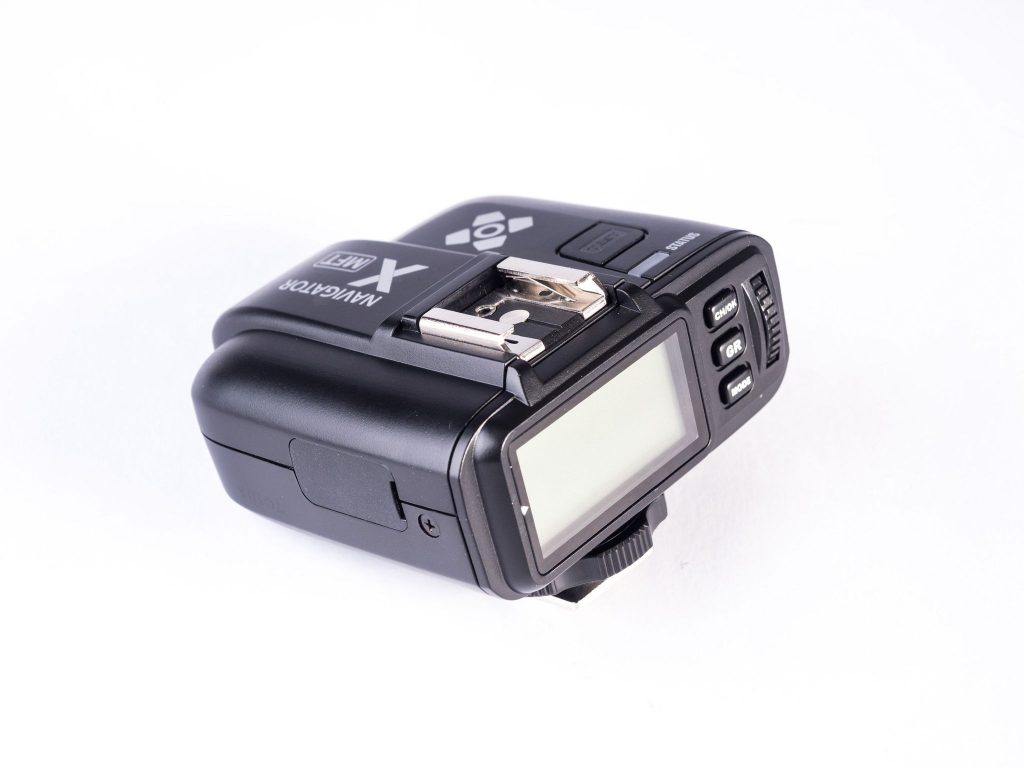 Okay, I have to admit, at first the Navigator X transmitter looked absolutely mahoosif on the Olympus E-M1 mkII. But ten minutes getting to know the interface, and it seemed like a solid extension to the camera itself. I found the interface to be fairly intuitive, although a couple of things threw me at first. I hold my hand up, I’m a sod for not reading manuals, and tending to push buttons till I figure out what they do. A lot of it is “discoverable” in this manner on the Navigator X, but I did have to resort to peeking at the manual to figure out how to adjust the output of a selected head. It’s down to a press of the group button. Who’da thunk it!

After an initial dummy run going through the various options, it didn’t take much to whip through changes and make adjustments to power output and configurations. Now to see how well the Reporter 200 operates in both TTL and manual mode. As I mentioned above, I’ve had occasional inconsistent results from TTL previously with the Metz, so that would be something I would be looking for. Also, I tend to find TTL can struggle if the contrast range is quite large. For example, a bride in white stood alongside a groom in black.

Now, I didn’t have a bride and groom to hand. In fact I didn’t have anyone, other than my dog, Cookie, and myself. Seeing as the fan heater was on in the office, no amount of coaxing would shift Cookie from the heat. So, that’ll be me then. :o(

My first thought was to test the TTL in quite challenging circumstances. Similar to the wedding scenario I mentioned earlier, I wanted a black area of the frame, and a white or light area. I placed the Reporter 200 with the bare bulb head in an adaptor, fitted to an Elinchrom 70cm Deep Octa. By mounting it quite high and angling it sharply downward, it would avoid any light falling on the background, aided by quite a short distance to the subject, Moi. I was intrigued to see how it managed.

ALL following images are straight vanilla conversions from raw to jpeg. No adjustments. 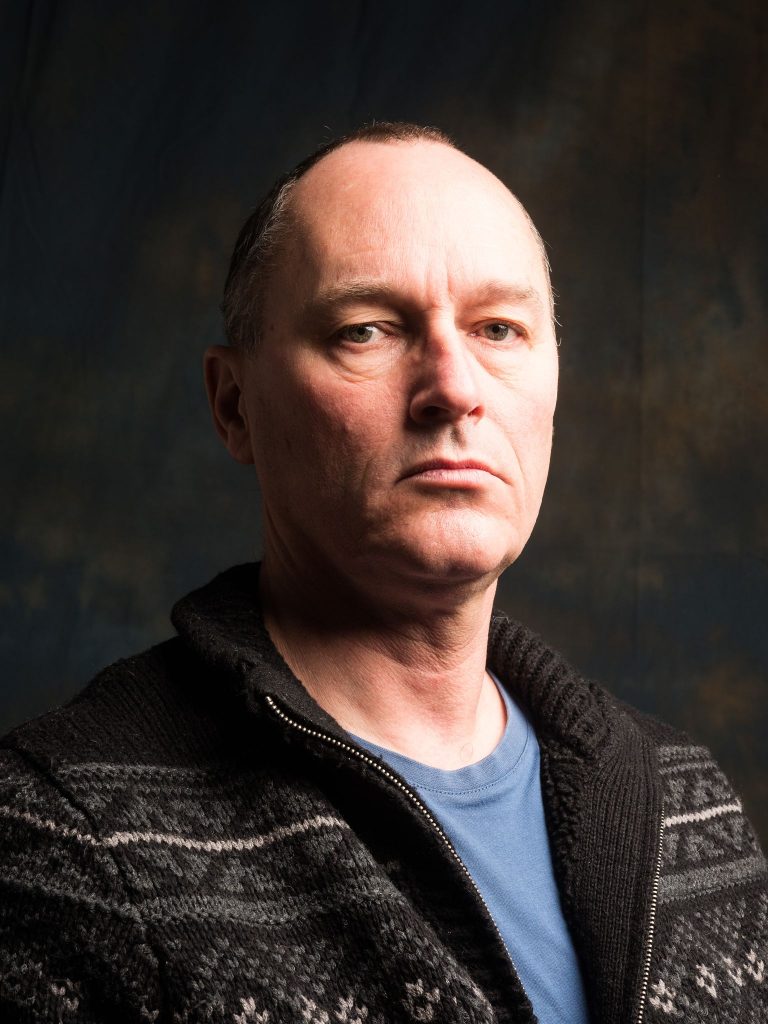 If we ignore the fact I look so ruddy terrible, the TTL actually coped quite well. I think it’s slightly over exposed, as it’s tried to compensate for the black background, but it hasn’t blown the highlights on my cheek and forehead frame right. Bearing in mind there has been no adjustment to this image at all, It would easily recover with a simple reduction in exposure value in post.

After seeing this image after the shot, I then proceeded to take several, one after another. In similar circumstances, I have found other third party TTL speedlights have been inconsistent, varying between slight over exposure, to slight underexposure between frames. It was reassuring to see the Reporter 200 produced very consistent results time after time. Unfortunately, it also started that nagging doubt with regards to the useful lifespan of my Metz.

I then switched to manual, which is my standard method of working. 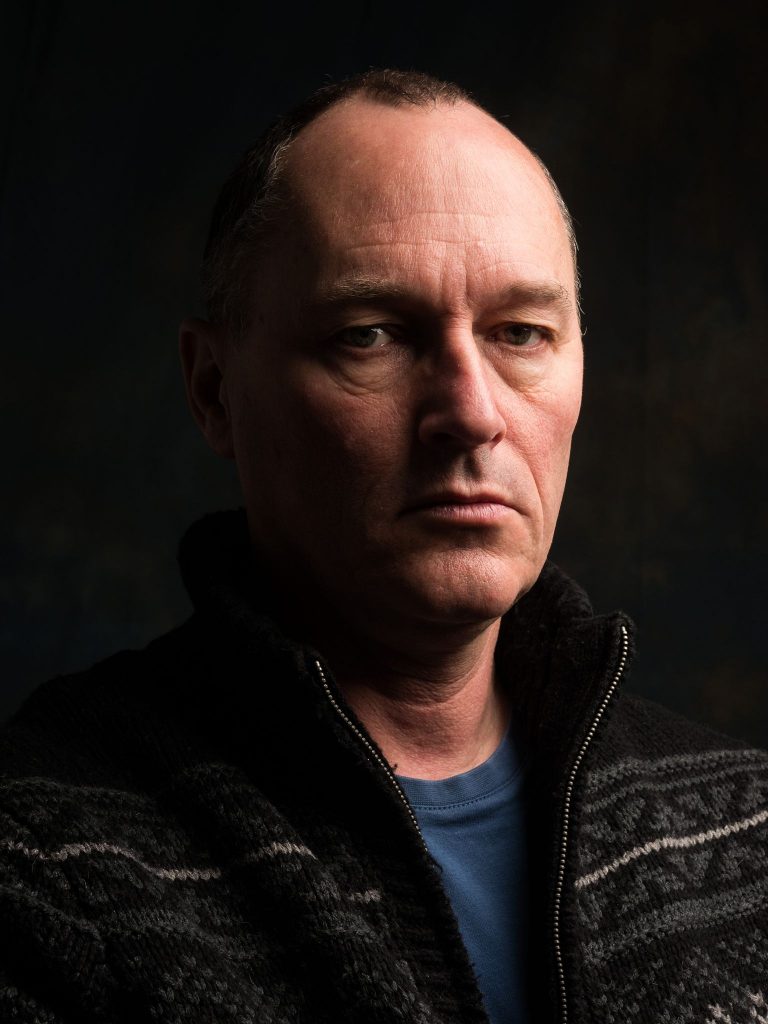 This is how I envisaged the image, and you can see the difference with the TTL trying to compensate for the background. Bearing in mind, I could have dialled in some flash exposure compensation, say a stop under exposure to the TTL, and it would have been much closer to the manual exposure.

By now, I was finding the controls on the Navigator radio trigger to be almost second nature, which is some going after only a five minute play.

The following is the BTS setup image. 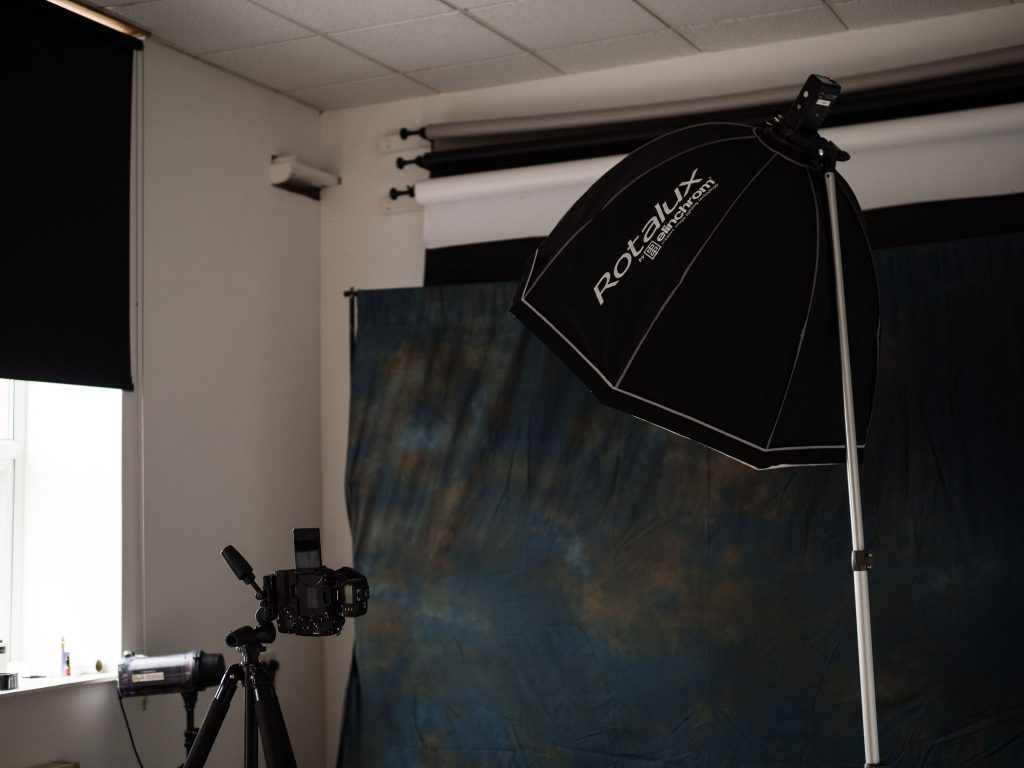 Considering how close the TTL image is, and ignoring the slight overexposure, I wondered how it would cope with a reflector for the far side. The first image is still on manual setting for the speedlight, and is shown as the “control” image. Or more accurately, where I would prefer the image to be from an exposure point of view, for what I had in mind.

As a one light portrait, bearing in mind it was intended to test the light, it’s okay.

So now the exact same shot, with the reflector, but using TTL and no compensation. 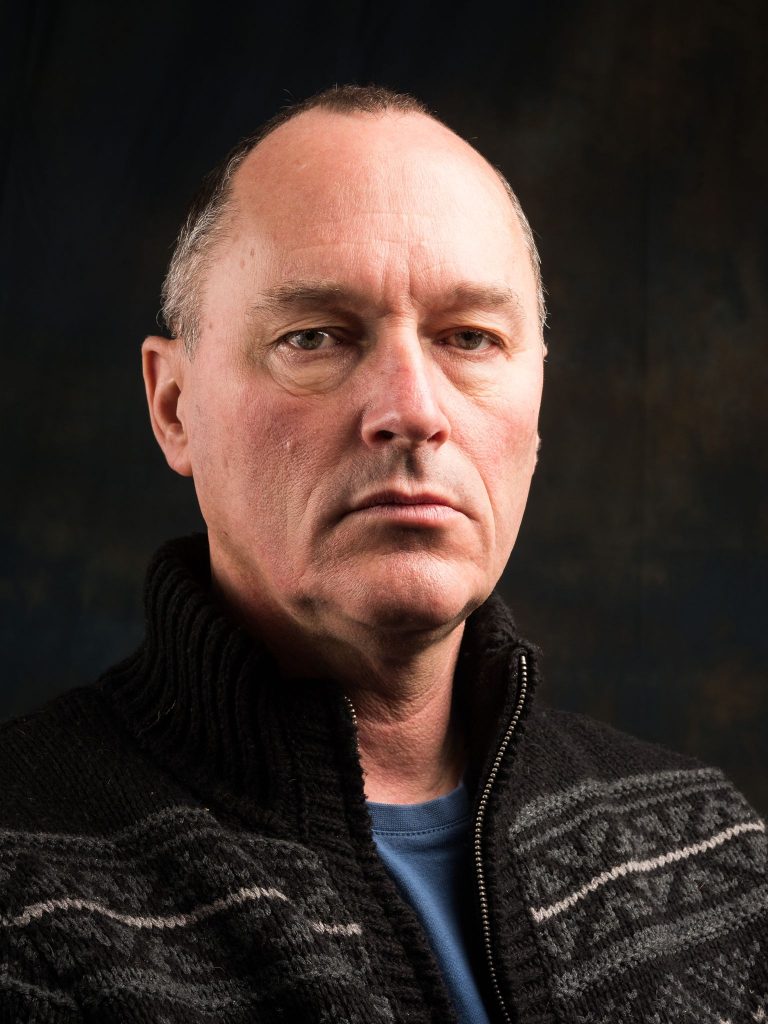 Now that there is light being bounced into the frame left side of my face, the speedlight reduced the output automatically. It’s still a little overexposed, but not as much as the first TTL image. Also, the background has been allowed to go darker.

I don’t think this is such a bad “quick” portrait, afforded by TTL, bearing in mind it’s a vanilla conversion without any adjustments at all. It would take no time to tweak it in post to match the manual image above.

The following images are the BTS setup images. 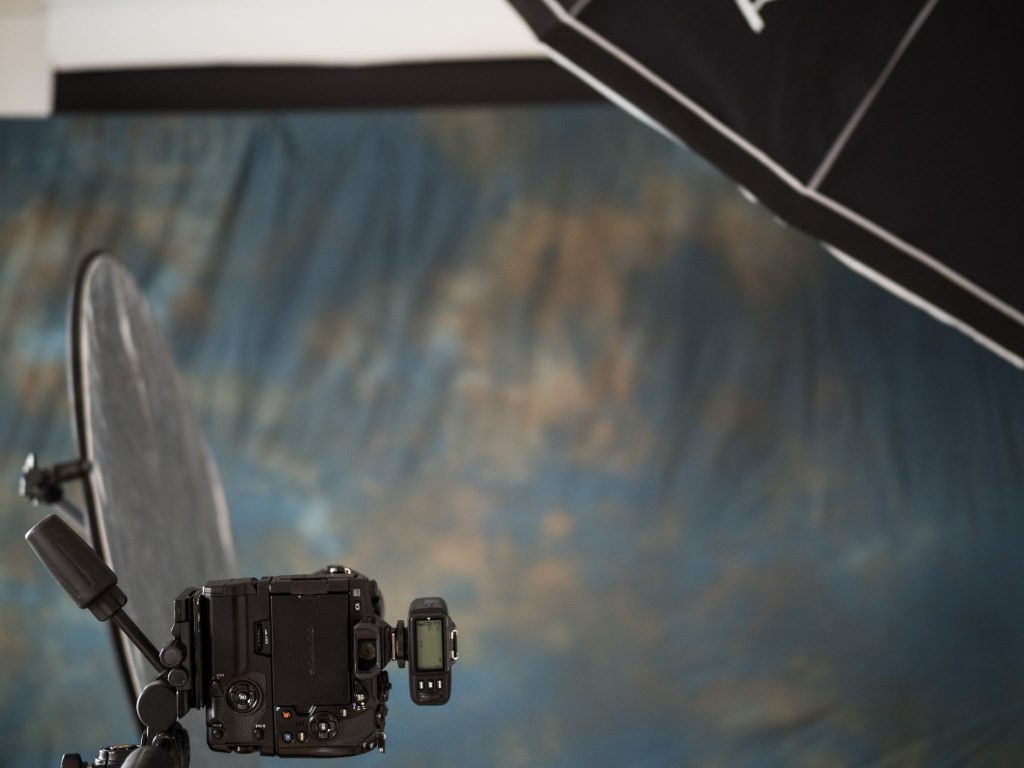 All the above are using the bare bulb head, and it filled the softbox as any studio head would do. So lets give the speedlight head a bit of a spin.

I’ve previously reviewed the Sundisc modifier [https://www.lightingrumours.com/sundisc-review-9509], and felt it would be ideal for the Reporter 200. The same adaptor was utilised, as it fits the Sundisc nicely. The following is the BTS image of the setup, showing the Sundisc, reflector and tabletop. 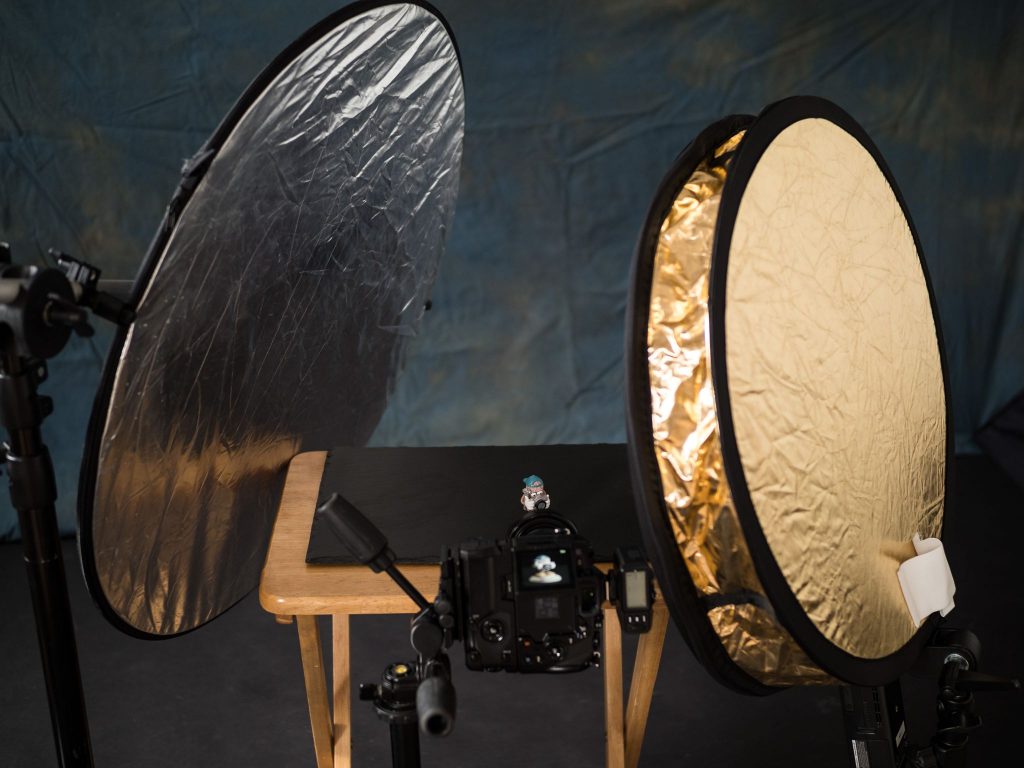 First is a simple dust collector from my desk. 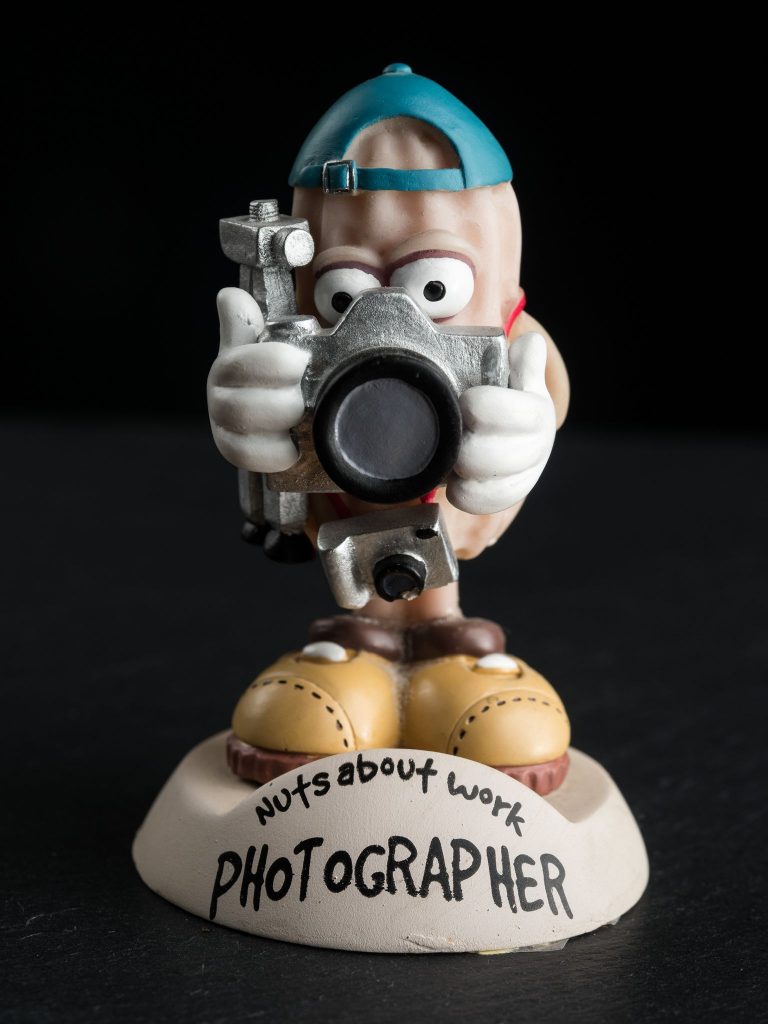 This was with the Reporter 200 manually set to 1/64th output and a pleasant enough exposure. 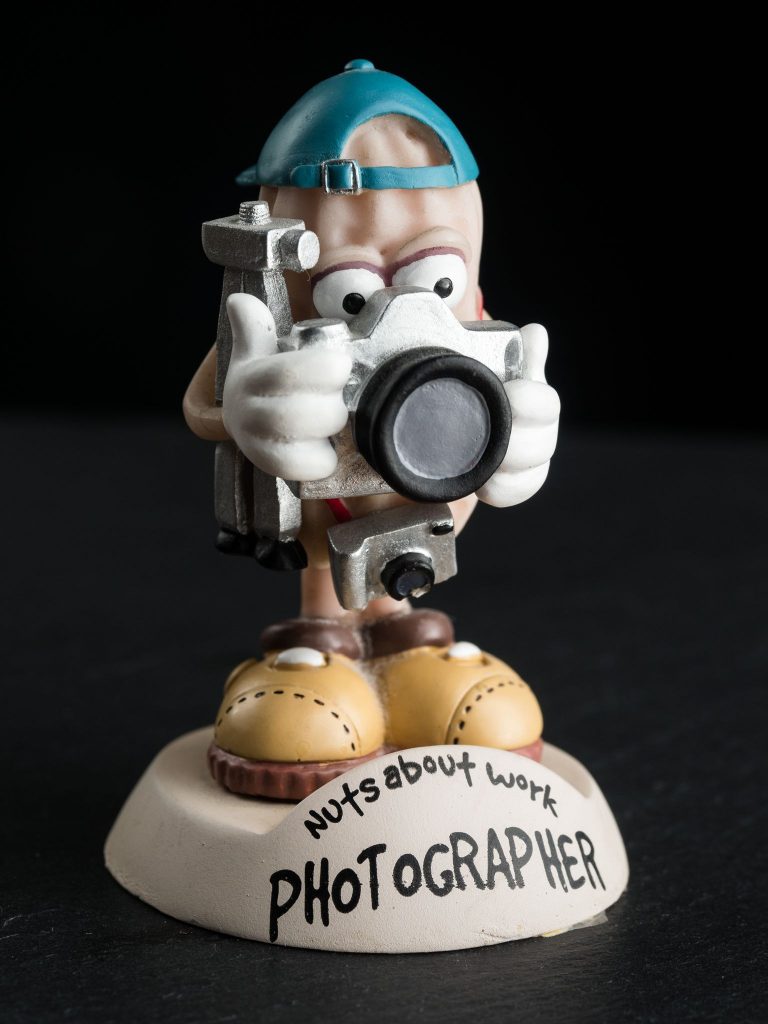 This is with TTL at default setting and no exposure compensation. I can’t really see any difference between the two, to be honest. Again, both are straight conversions from raw with no adjustments at all.

Moving on to a shell bracelet, sat on a black slate. Again, the high contrast should cause more of an issue. 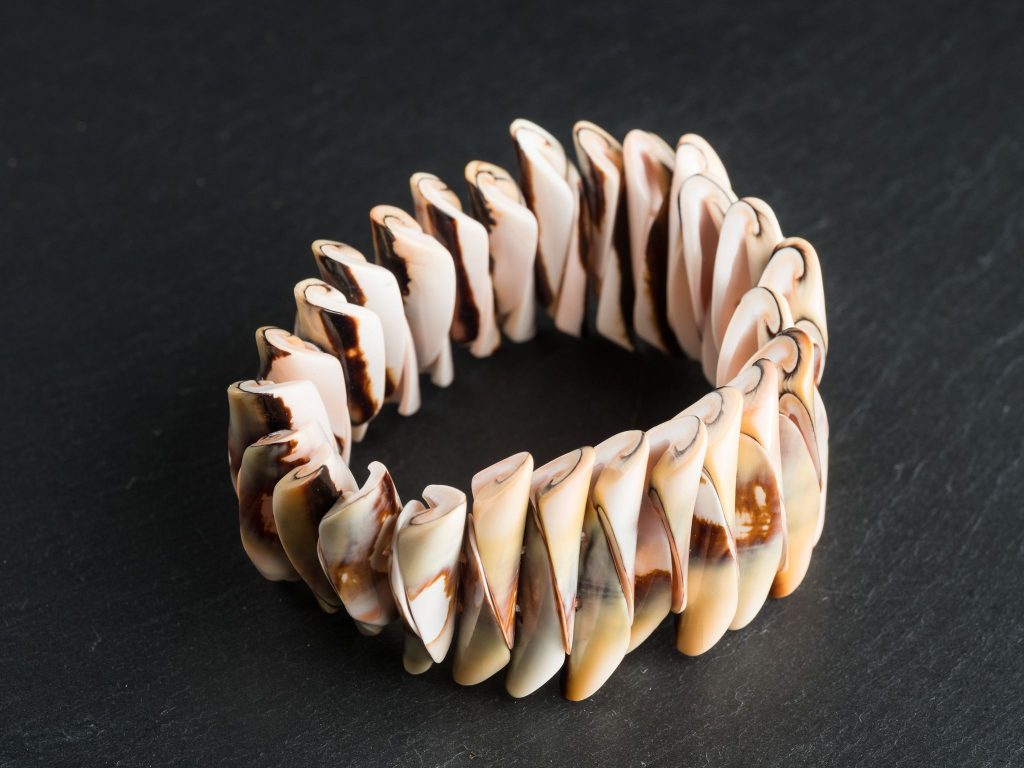 This is the TTL version, and I’d say it was a good exposure. Perhaps slightly over exposed, although not by much, on the bracelet itself. Presumably due to the dark background as the the TTL system tried to compensate for the slate.

Better exposure for the bracelet, without losing the detail in the slate.

So that’s in a controlled environment in a studio, and I found the results to be better than my previous experience with TTL. I also found the TTL images were close enough, that the amount of tweaking needed in post was actually very little, and the images matched their manual counterparts extremely closely. And that got me thinking…

What if I took the Reporter 200 along to a couple of client shoots, you know, just as a field test kinda thing, with TTL. So I did.

I tried a single light in a 80x80cm folding softbox for a portrait, along with a reflector.

I tried a bit of food 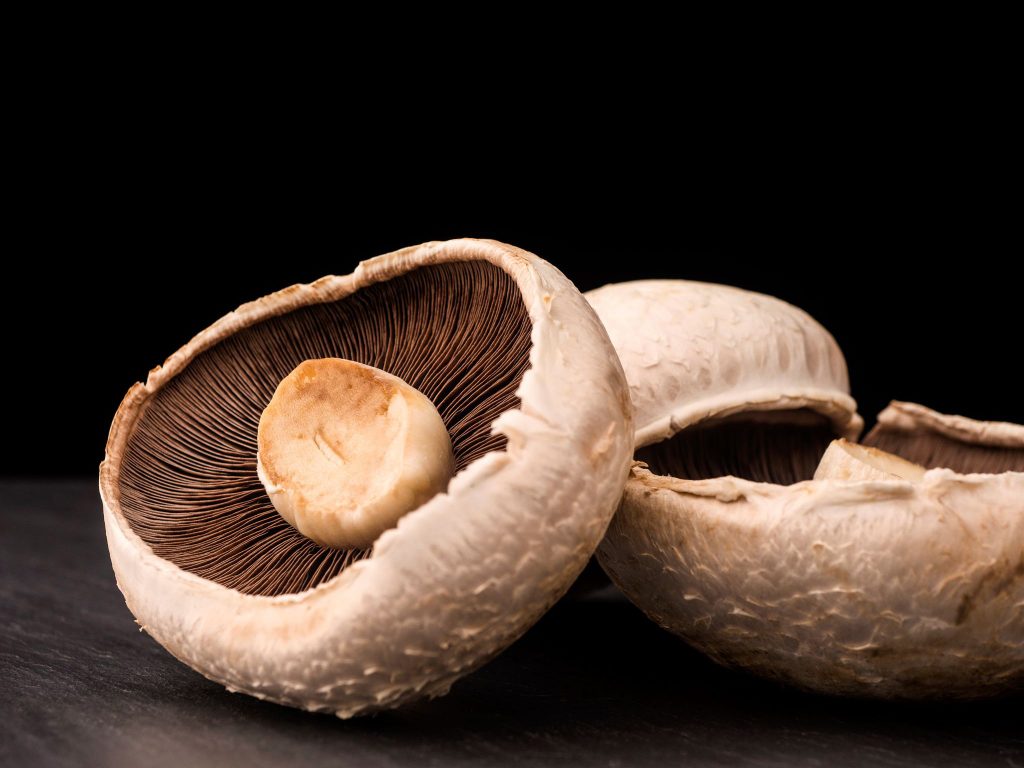 And I also tried some products

And something strange seemed to happen. I actually felt I could trust the TTL with the Reporter 200 to get me in the ballpark very quickly. Whereas my Metz would occasionally drop me off in a neighbouring village.

I got the Reporter 200 to test the TTL stuff, mostly out of idle curiosity. And it didn’t really go as I thought.

I found the Reporter 200 to be extremely capable, very compact, and ideal for a lot situations I find myself in. I’ve already started weighing up how I might reconfigure my camera case to take four of these, and dump my speedlights. If I can find a way to rig up one of these as my onboard flash for weddings, I’m going to do it, I swear.

You know, Idle curiosity is the biggest threat to my wallet.