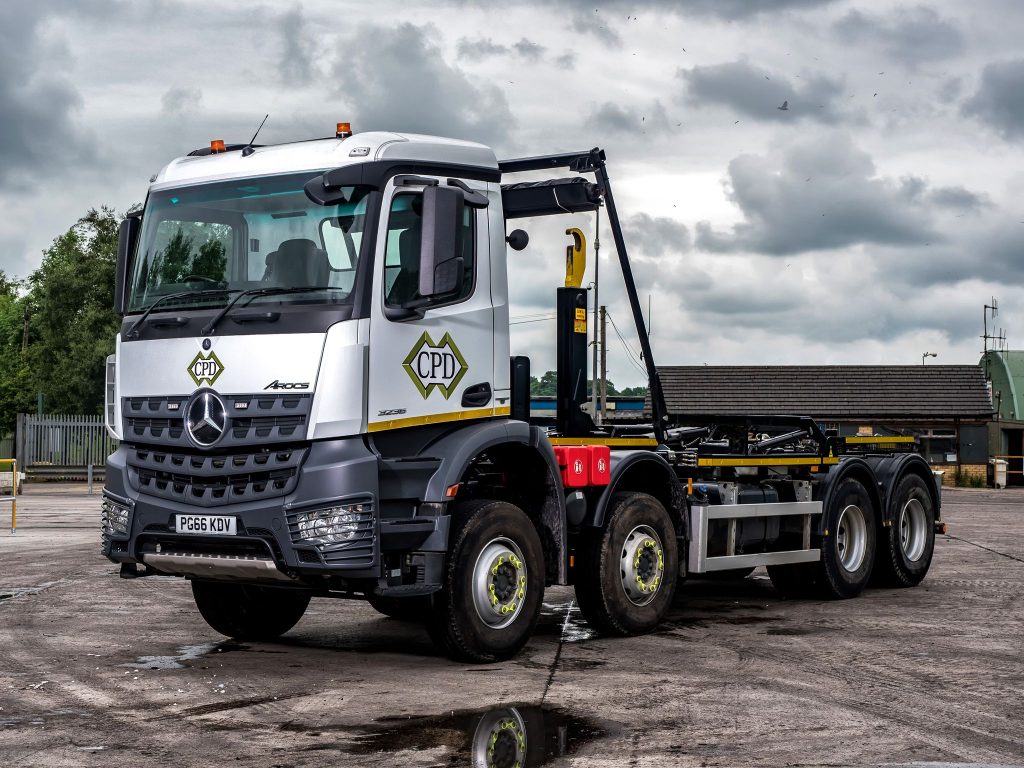 Automotive photography can be challenging, particularly large vehicles such as lorries or buses. And equally, it can be very rewarding.

On this occasion,we had a couple of challenges. The weather was a bit of an issue, as not only was it overcast, but it was blowing a bit too. Now, being overcast with the cloud having decent structure is a real boon. The only sky I don’t really care for, are those complete whiteout skies, with no personality and not a lot you can do at the time of the shoot to get anything more out of it. Which means more time in post.

And the other challenge? We were photographing a hook loader truck at a very busy waste management site in Preston. Backgrounds could change rapidly, and other moving vehicles could occasionally mean we may need to move our location.

To be honest, the site manager tried to have as little impact on our shooting location as possible, so that reduced some of the issues. The biggest problem was the shifting scenery in the background, causing no end of headaches during the shoot.

Wondering why moving objects might be a problem? Because I actually shoot three seperate exposures and blend them. Basically, a three shot HDR.

As this is a lit shot, if I did a standard bracket sequence using the shutter speed, it would only affect the ambient light, and not the flash lighting our subject. If we bracketed using the aperture settings, it would affect both the ambient and flash light, but we would get some pretty funky goings on with the depth of field.

I bracket using the ISO, which affects both ambient and flash light. I only take three frames, as I don’t want too wide a range of images, as we would be getting into high ISO country, and all the issues such as noise that would be associated with it.

Basically, I use ISO settings of 64, 200 and 400, with 200 being my baseline for the correct exposure, or at least how I would have shot the image if only taking a single shot.

With this particular setting, I wanted to increase the contrast in the clouds, adding interest to the sky. I also wanted to make the truck “pop”, drawing the eye to our subject. Actually, the technique for making the truck “pop” against the background, also adds more contrast to the sky. Well, rather it darkens the sky so there is more latitude for contrast in the finished image, and also reduces the chances of blowing out any highlights on the clouds.

I used an Elinchrom ELB400 firing an HS head through a high intensity reflector, at an output of 5.0. This was placed frame left and at a height of about seven feet. It was angled to fire across the front of the lorry, lighting the grill and bumper etc.

A second ELB400 was placed far right, and effectively aimed straight on to the side of the truck. This had another HS head firing through a high intensity reflector at a height of just over seven feet. Due to the slightly greater distance to the truck, the output was set to 6.0.

I was ably assisted by Damien during this shoot, making shunting the equipment around a great deal easier. His work can be found at krakenphotographic.com