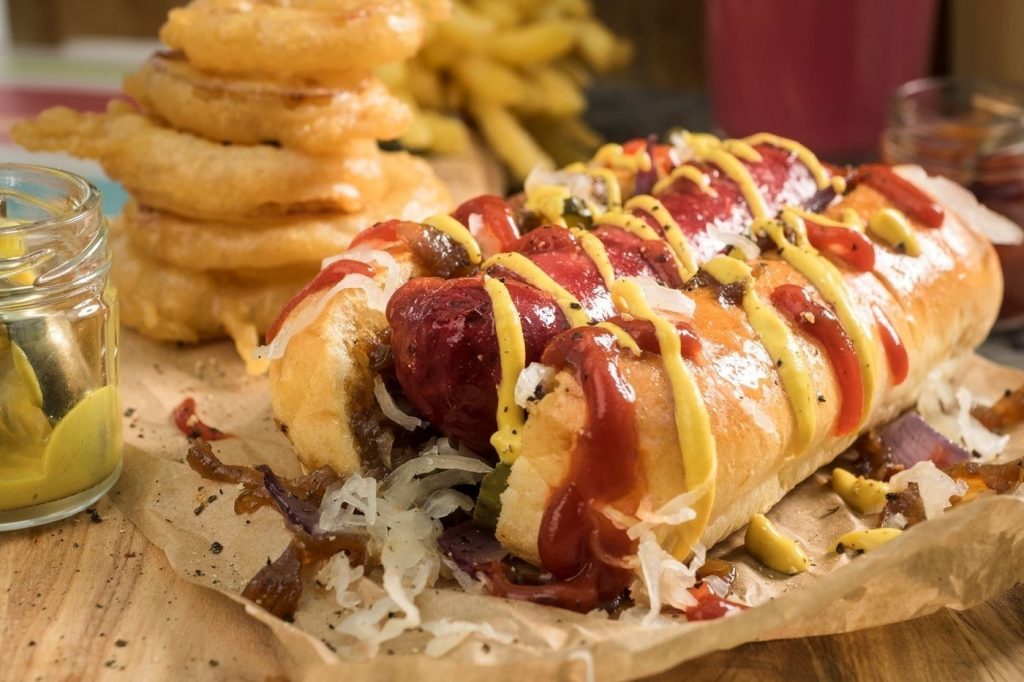 Food photography depends very much on good light, and yet the textures, shapes and form can respond extremely well to quite a simple lighting setup.

Whether I’m shooting on location in a restaurant, or a hotel, my lighting setup tends to be similar. I need to take into account the lighting and atmosphere of the restaurant or the hotel, and incorporate it into the image. Alternatively, when shooting for a recipe book or Getty Images, I tend to have free reign.

I’m particularly careful to ensure the food glistens to add allure. I don’t mean “glisten”, as in added oil. I mean the specular highlights caused by the light. As light travels in straight lines, then placing the light on the far side of the food, in line with the camera, will potentiate the reflective properties of anything glossy. Glossy can be fluid, oils or just the wet nature of the food itself. It can be seen above, along the ketchup and mustard, the side of the bratwurst, and also along the edges of the onion rings.

If you bear in mind the angle of incidence, you can pretty much place the light, and know where the highlights will appear. That said, as the light is basically being directed towards the camera lens, a grid is essential to negate flare, and therefore reduce the possibility of loss of contrast.

I switched to Elinchrom ELB400 for food photography mid 2016. As the lights tend to be quite close, to the point that sometimes, the ELB400s are operating at almost minimum output. Using the B port is the only choice, allowing a little more manoeuvrability in the power output. I often shoot at an output of between 1.0 and 2.0, depending on distance. This of course means I can shoot all day with power to spare.

In the above image, the accent light was placed frame right, beyond the table. I usually have the accent light head slightly above the camera height, so as to ensure the light source doesn’t appear in the frame. I tend to fire it through an 18cm reflector with a grid fitted, providing a controlled pool of light. For the above image, it was set to an output of 1.0, as it was quite close.

The main, or key light, is another ELB400, usually firing through an 80×80 folding softbox. Normally, this is placed as close to the table as possible, almost directly overhead. The output was set to 2.0.

To be honest, this setup varies little, other than the position of the lights, which depends on the food being photographed, as I’m looking to get the best from the specular highlights.

Photographing food for a restaurant or bistro, tends to be quite different to photographing food for Getty Images. With a restaurant, your aim is to include the ambience of the restaurant, which can be attained by including out of focus lit areas of the bar, or branded condiments and cutlery etc. Often the plates are particular to that restaurant. We are aiming to create a familiarity within the image for past customers, hoping to stir them to return, as well as new customers, whom we are hoping to tempt into a welcoming environment.

When shooting for a stock library or recipe book, there isn’t the familiarity aspect to draw on. No branded house crockery or cutlery etc. We have to build the whole set from scratch, sometimes to a brief, sometimes not.

In this case, it starts with a table, then the food support. As it’s a hotdog, a brown paper “wrapper” seemed best suited. We also sort the supporting cast of props that are suited to the scene.

The hotdog was part of a series of images along a street food theme, such as burgers and steak sandwiches etc. 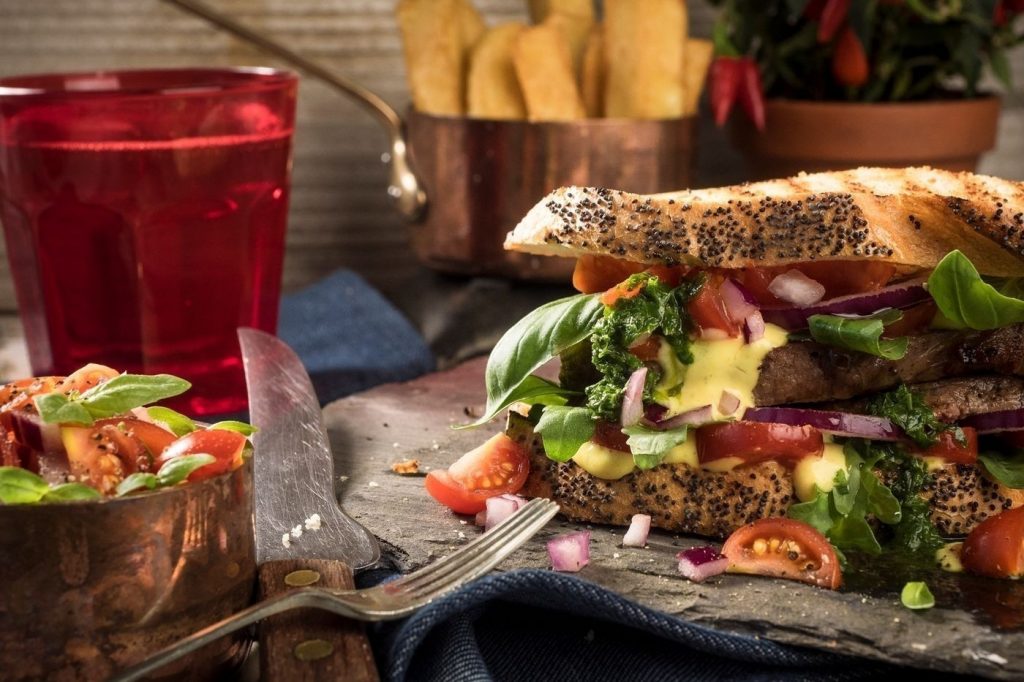 The above is again the same two light setup, but with the accent light switched to left of frame. 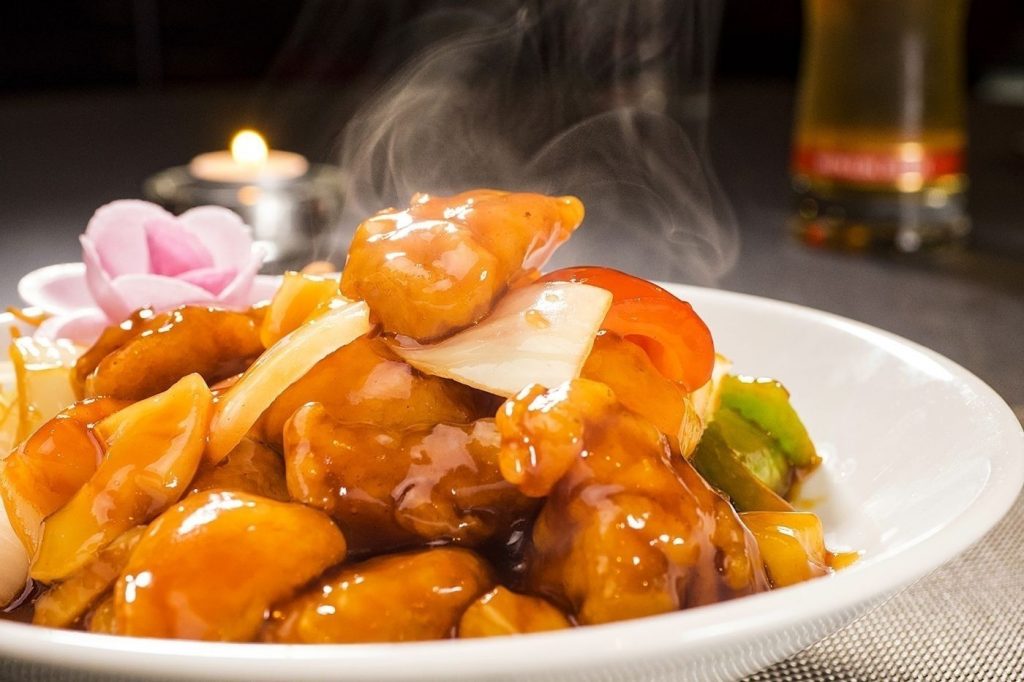 If there is the potential for steam from the dish, I have a third ELB400 set to fire across the dish at 90 degrees to the camera, and at the same height as the dish. Again, I make use of an 18cm gridded reflector, and once again, it tends to be at the lowest possible power output, due to the small distances from the light source to the food.

Here, I needed a longer exposure and an increased sensitivity to ensure the candle registered.

The following images came from the World Food Championships at Orange Beach, Alabama. 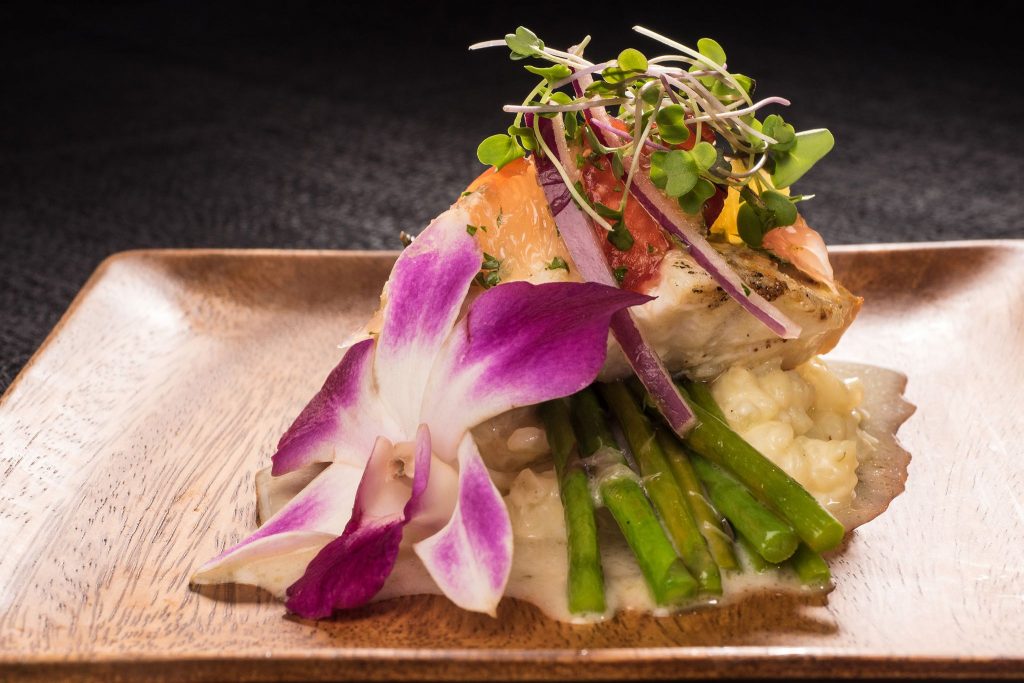 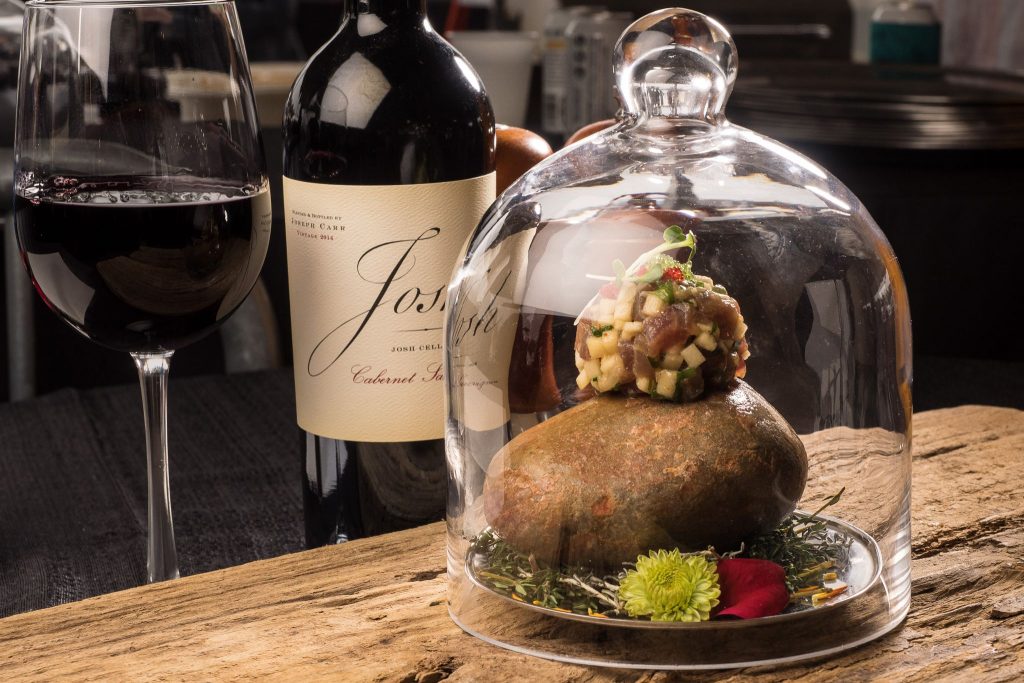 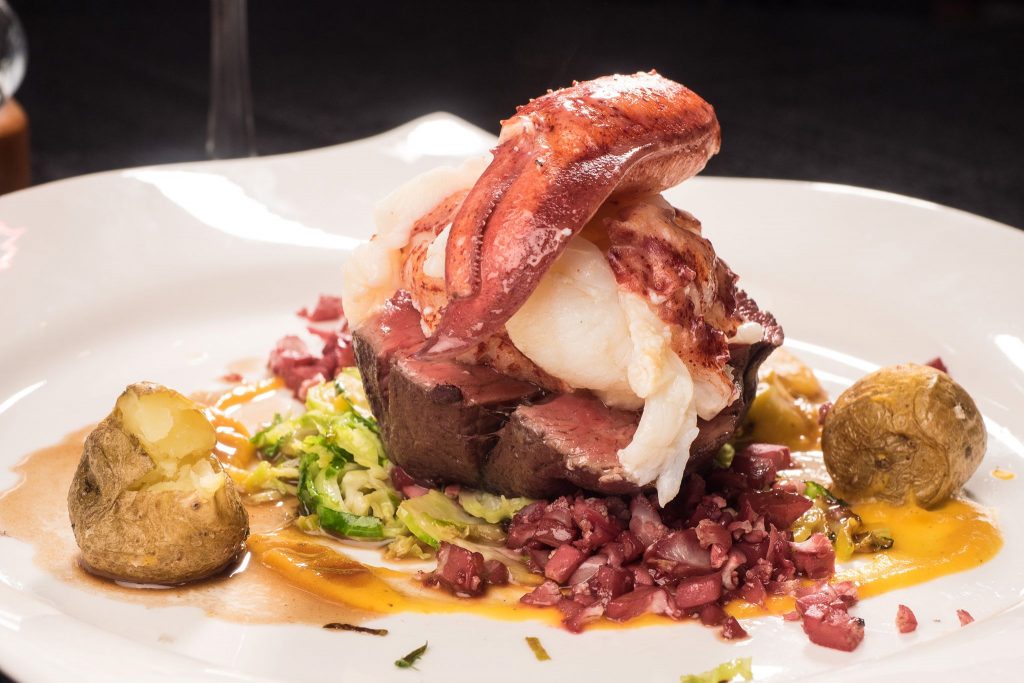 Same two light setup, although the softbox was switched from my usual 80x80cm folding softbox, to the Portalite 66x66cm with quadra fitting. The main reason for the switch was weight. When packing to shoot at a destination, weight becomes the main factor for any kit making it into the kitbag. It took up less room too.

A full walk through of these images can be found here.

I’ve found the Olympus to be particularly suited for food photography for a number of reasons, not least the depth of field and close focus ability of the 12-40mm f2.8. The stabilisation means no tripod is required, even when shooting at 1/30th sec and slower, allowing the capture of candle light etc.

In fact, considering I purchased the Olympus E-M1 as a personal weekender, it was food photography that convinced me to use it for everything.

Food photography is one of those disciplines that can very easily be done on a budget. Due to the closeness of the light sources, a couple of speedlights will suffice, and you are very unlikely to be above ¼ output. A shoot through brolly could be used for the main light, but you will need some sort of grid to control the accent light. The only challenge you will have is the filling of a softbox due to the reflector built into the speedlight. A brolly will give a good broad light, but it will light everything, and I do mean everything! It’s bounce from the ceiling and walls, and throw light to the areas beyond your table. This means it may be more difficult to capture the ambience of the restaurant or hotel. A softbox is a better option, and a bare bulb system such as a location kit is definitely the way to go. You would have to pry my ELB400 from my cold dead hands!

Okay, maybe little too dramatic, but you know what I mean.