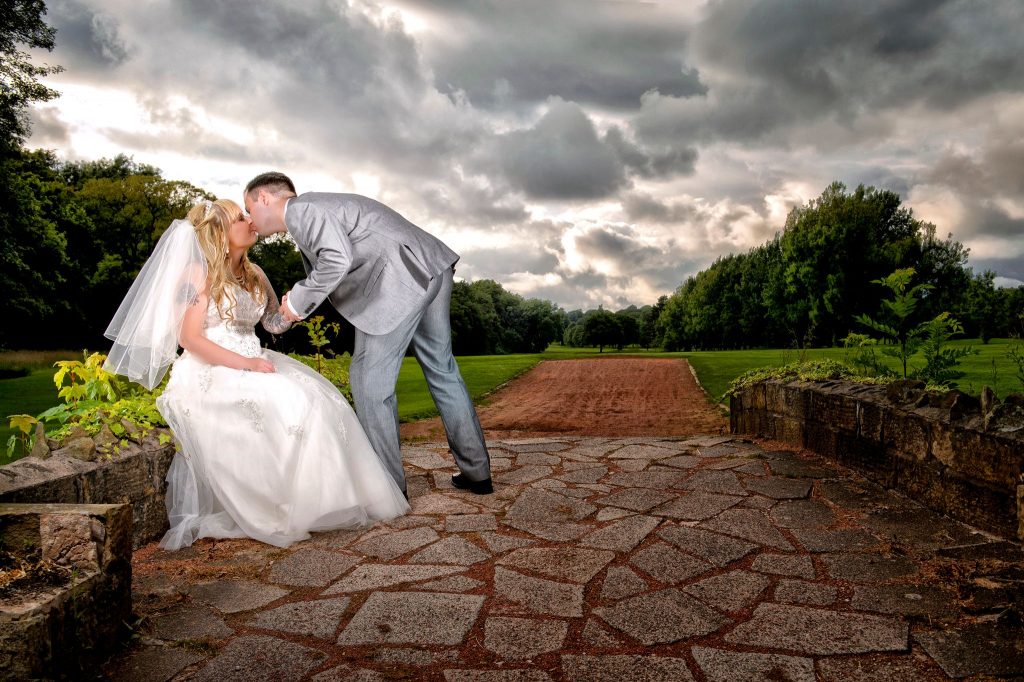 A fairly dull afternoon, with a wonderful view and a great couple. What a wonderful opportunity.

This is the bridge in the middle of Worsley Golf Course. Prior to the wedding, I didn’t have an awful lot to go on as to what to expect at the golf club. I have to say, I was pleasantly surprised. The staff were exceptionally helpful, and gave very good advice regarding where to shoot and where to avoid. The areas to avoid were down to competitors on the course, and it changes at various times of the day. Needless to say, wherever you shoot, the backdrop is amazing.

Back to the image.

Whilst the lighting for this image is very straight forward, two accents and a key, the placement of the lights was quite problematic. The bridge runs over a stream, which means the accent lights needs to be on the far side of the stream, which also meant there was a fair distance from our bride and groom. The accent light frame left wasn’t too bad, as our couple were also frame left, which meant the accent light could be closer without fouling the frame. I placed an ELB400 firing at 5.5 through a honeycombed stripbox on the far side of the stream, and only just outside the frame.

I originally tried placing the frame right accent light on the far side of the stream, but due to the distance to the couple and having to avoid fouling the frame, the maximum output of 6.0 just didn’t impact on the couple at all. I therefore brought it to my side of the stream and placed it pretty much at the end of the wall frame right. It was another ELB400 firing at an output of 5.0, through another honeycombed stripbox.

As it was so overcast, it didn’t take an awful lot to bring the ambient down just enough to add drama to the whole scene.

Worsley Golf Club is a great venue for a relaxed, small wedding group. It’s a bit of a hidden gem really, especially from a photographer’s viewpoint. They could really do with a wedding brochure or at least some good wedding imagery.