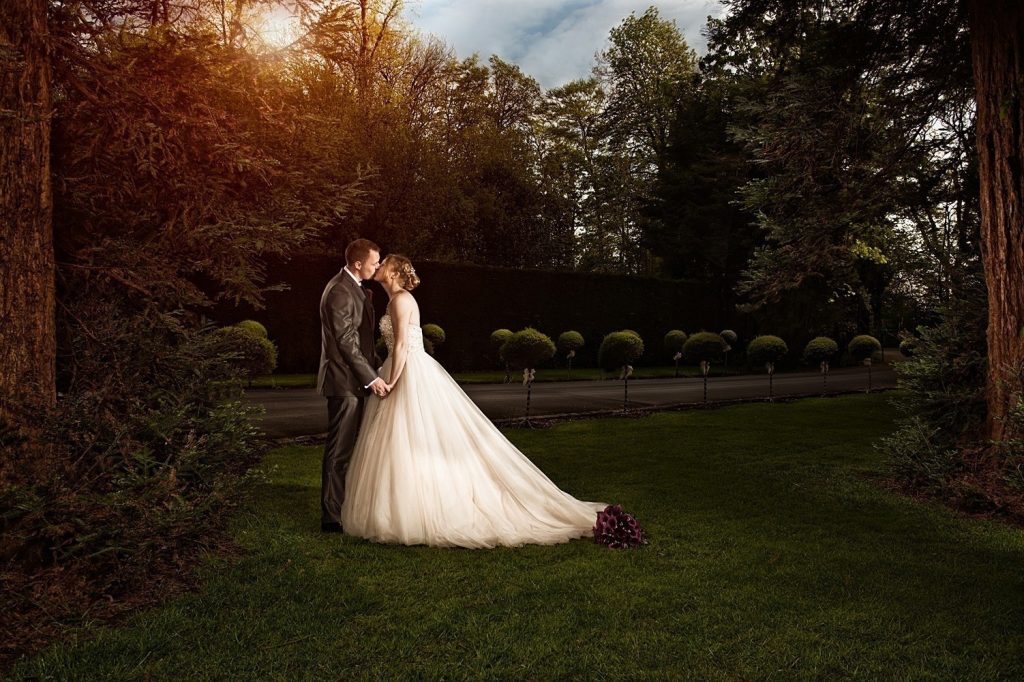 This is an image from last year that seemed to have all the right ingredients, but just fell flat on the light test. The background was just far too dark to have any kind of detail in the hedges or bushes. If I opened it up for the bushes, the sky instantly blew out, and I lost any kind of atmosphere from the setting sun.

A quick change of direction as Wayne headed off to round up the bride and groom.

I put the camera on a tripod with a remote release, and decided we would get the initial image as well as we could, and then light paint each bush and feature in the background on separate frames, and then merge them all for the final image.

Yes, it would be quite a bit of work, but I think the final image is worth the effort. And besides, I would be asking Wayne to walk around the bushes with a speedlight, while I dutifully pressed the remote.

Working left to right across the frame, the key light is a Godox 600Ws Energiser (or equivalent, rebranded item from Cheetah Stands, Pixapro, Lencarta etc). This was on a lightstand at a maximum height of 2.7m and firing through a gridded 150cm folding Octa. This was mainly to provide the overall light to the couple, with very little light going anywhere else. My intention was to light everything else via lightpainting later.

The light output for the key light was set to ½ power.

The rim light that is seen on Lee’s jacket (right shoulder), is coming from a Godox Witstro 360Ws firing at ½ power through the dedicated gridded beauty dish. I had originally intended to place it in line with the tree trunk so as to hide it, but I found the foliage actually obscured far too much of the light from that angle. Consequently, I moved the lightstand effectively half way between the tree and Lee, although further back, obviously. You can see it in the foliage of the BTS image below.

A third Witstro 360Ws is firing through an 80×80 quickfold softbox (Cheap as chips on ebay), and mounted on an extending paint pole, held aloft by Wayne. Surprisingly, he doesn’t complain about holding equipment aloft for some time, but I do find I tend to get coffee without sugar for a week if I overtax him!

The third light was set to ¼ output, and was mainly used to pick out the detail and texture on Nicola’s dress and flowers.

There is a fourth Witstro 360Ws firing through another dedicated gridded beauty dish frame right, again at about 1/2 power. You can see the light impact on Wayne’s head and shoulders in the BTS image below. This was aimed fairly high, to give some accent to Nicola’s arm, shoulders and hair.

Once the keeper was in the bag, and the bride and groom went back to their guests, Wayne then took the same 80×80 softbox and Witstro, lighting each bush individually, along with the hedge, trees trunks etc. The output was set to about 1/8th, although it did vary depending on how close he was to each element.

All the frames were combined in post, with each lit element brushed through to the main image.

Yes, it was a lot of work for a single image, but the time for the bride and groom was kept to an absolute minimum, and they weren’t required for the lightpainting part.

The below image was a pull back, before getting the final user image. You can see the Octa top left corner, and the beauty dish beyond the foliage. The light and stand were removed in post. 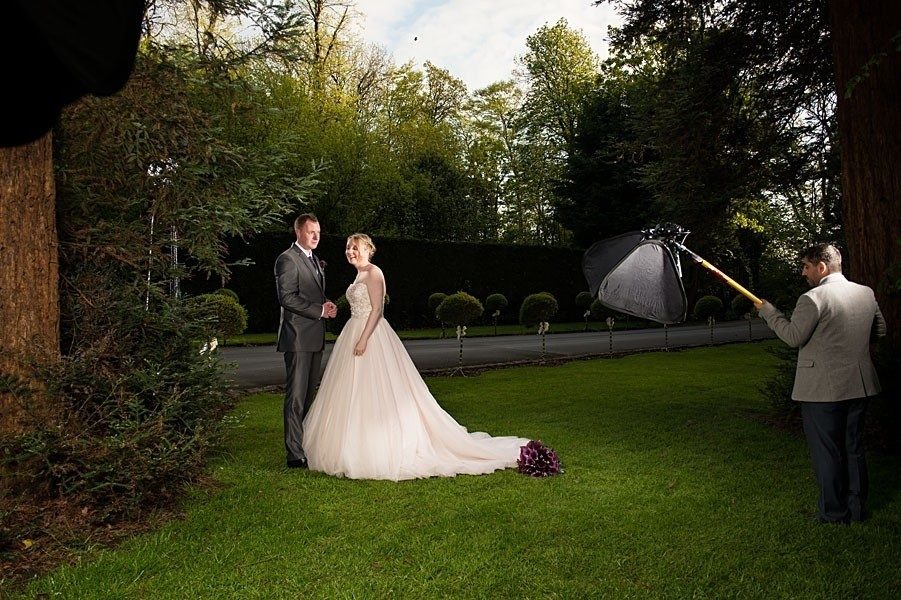 The location is the wonderful Bartle Hall Hotel, which can be found at http://www.bartlehall.co.uk/