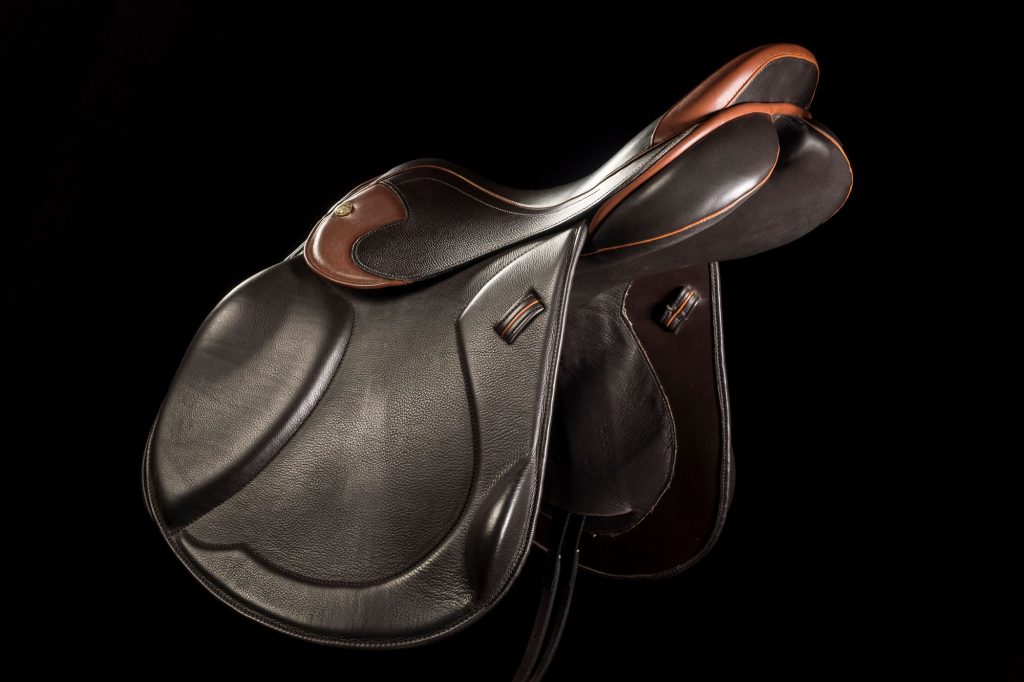 This was photographed as part of a product portfolio for an equestrian equipment supplier, Saddles Direct in Burnley.

Due to the complex shape and the requirement to ensure the various textures were visible, I needed to use a fairly complex four light setup. Starting frame left and further back than the saddle, I placed a 300Ws head, firing at 1/8th through a 40cm beauty dish. This provided the accent light seen along the top left edge of the saddle, along with the splash of light skimming across the seat area. This helps to highlight the texture of the leather grain.

Again frame left, and a few feet away from the camera, I placed a 300Ws head firing at 1/16th through a 70cm gridded white beauty dish. This provided the overall lighting for the saddle. Why the grid if it’s not skimming or facing the camera? The grid is to ensure the light hits the saddle only, and doesn’t wash across the walls or ceiling which are white, and would have increased the possibility of the background losing its depth of black. I wanted the background to stay black, so as the saddle would be isolated from anything else.

A third 300Ws head was placed camera right, firing at 1/8th through another 40cm gridded beauty dish, and placed marginally in front of the saddle, allowing the light to skim across the saddle frame right to left. This enhanced the visible texture in the leather. It also created the shadow and highlight in the front panel so as to give it some depth.

Finally, I found the third head didn’t quite fill the underside of the saddle enough. I placed a 200Ws head with a gridded standard reflector in line with the saddle but a little lower. It was set to fire at 1/16th, its lowest setting. I found I had to move the head a little further out to reduce the intensity of the light hitting the saddle. After all, I wanted to add just enough light to show some detail, without it becoming too distracting.