The Outlaw – Avoiding Reflections in Chrome 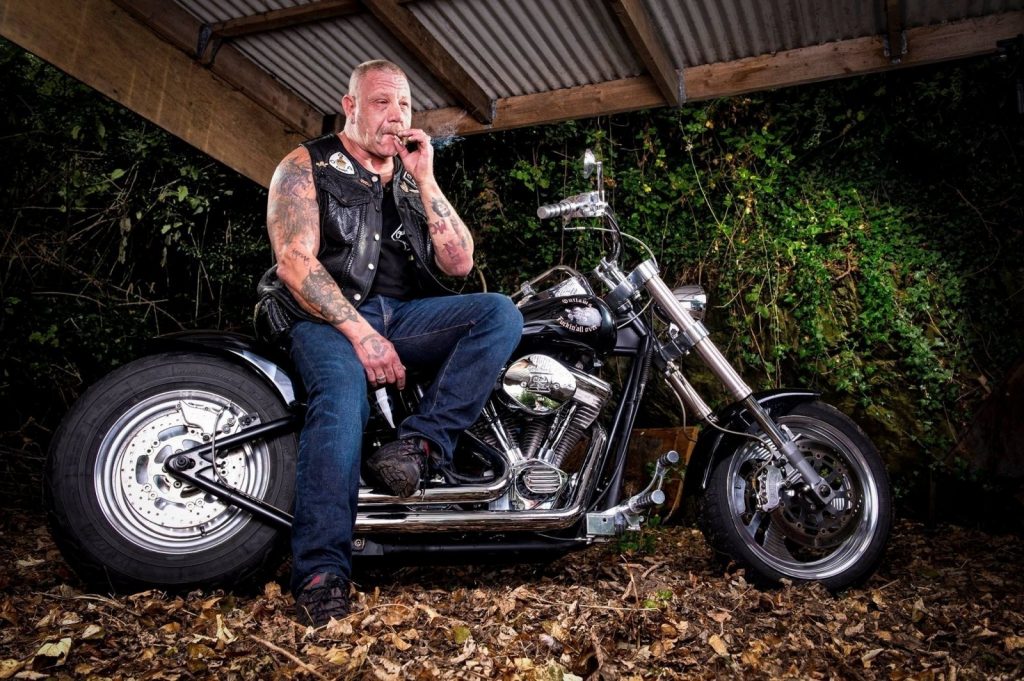 This image came from a location lighting course I was asked to host in August 2015 for Cambrian Photography, based in Colwyn Bay, Wales. Our model was a local “Outlaw” chap, complete with a self-built bike.

Now, when I took a look at the bike, the first thing that struck me was the acres of chrome and highly polished steel. I needed to ensure it photographed as chrome, with nice highlighting, but I also didn’t want a reflection of me as “the fat photographer” being seen in every highly polished nook and cranny!

I asked our model, Dink, to place the bike across my viewpoint, and on its stand so it would lean away from me. My thoughts were to have Dink as the focal point with the bike secondary. I wanted to have the background lightly under exposed so I t would provide interest, without distracting from our main subject.

Frame left, and a little further back than the bike, I placed a Godox Witstro 360Ws at a height of six feet, firing through it’s dedicated beauty dish and grid, angled down towards Dink’s shoulder. This provided the accent light along his upper arm, shoulder ad across his cheek and hair. It was set to ¼ output.

Frame right, at the back of the area, I placed another Witstro 360, again firing through its dedicated beauty dish and grid. This was attached to a clamp, and suspended from a ceiling rafter. It was aimed at the foliage to ensure I didn’t lose too much detail. If I were to do this shoot again, I’d probably turn the output down on this light by a stop or so. I feel it may be just a little too much. It was set to 1/8th.

Frame right again, and in line with the bike is a Godox xEnergiser 600Ws at a height of five feet, firing through a 150cm Octa. I couldn’t raise it any further due to fouling on the ceiling, even with the Octa angled downward. I started off with the honeycomb attached but found it didn’t light as effectively as I needed along the length of the bike. Once the honeycomb was removed, I had ample accenting along the bike, and also on Dink’s jeans etc. It was set to 1/8th.

Now, the main light was going to be trickier. I needed a very broad light that would effectively provide all the highlighting I needed along the chrome and polished steel. I also needed it to penetrate the engine parts effectively. And of course, I really didn’t want to see myself in all those chrome bits! Very large softboxes are problematic on location. They usually aren’t the collapsible type, and I needed something like my studio 6’x4′ Calumet box for this. For this kind of scenario, I pack a shower curtain. It’s a white nylon 6′ x 5′ sheet, basically.

The eighteen-inch gap along the bottom? That was to allow me to shoot from under the curtain, ensuring a number of things happen.

I was hidden from any reflection.
The leaves on the ground became larger
It created the “Hero” illusion by making the viewer look up to Dink and his bike.

Being introduced to an Outlaw isn’t an everyday occurrence for me, and let’s face it, Dink looks pretty scary. Now, as I’m about to mentor fourteen photographers, I’m going to have to talk to the scary gentleman and explain what I’m aiming to do and how he can help me achieve it. Dink couldn’t have been more helpful, or understanding. And as the day progressed, I learnt an awful lot more about this gentleman, and how they, as a chapter, run a huge amount of charity events for a number of charities, although mostly children’s charities.

For a scary gentleman, Dink was far more the gentleman than some other folk I have met.

The behind the scenes video, shot by Gerallt Jones for Cambrian Photography: