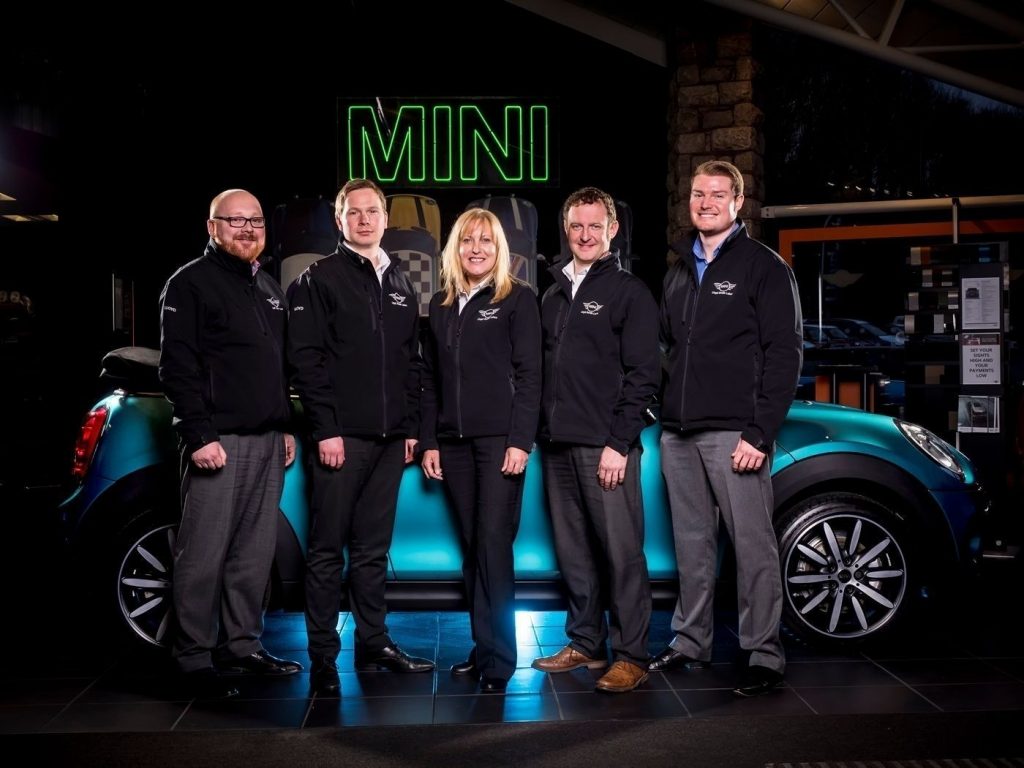 I spent the early part of 2015 running around the Lake district and Cumbria in general. This was for Lloyd Motor Group, creating headshots, dealership interiors and exteriors, along with team shots etc. However, Cumbria being the black hole of connectivity that it is, this tutorial is somewhat late, and I apologise for that. I forgot!

The above image was requested by the marketing manager at Lloyd South Lakes for a PR article introducing their Mini dealership team at South Lakes. I was given the usual guidance and brief (“We’d like something creative!”) after they had seen the team images developed for other dealerships within the group in Lancashire.

To be honest, it’s a fairly simple setup, and there were a number of factors that influenced the development of the image. The Mini dealerships have a black colour scheme, which I wanted to exploit, as it would make any bright colours really stand out. The team attire is black, in keeping with the dealership colours, so placing the team members in front of a brightly coloured background would separate them from the dark background, and stop them becoming “lost”. My one concern was the darkly tiled floor, which certainly could have caused the “loss” of dark footwear, but the introduction of speedlights underneath the car would sort that.

Keeping any light forward, and off the background, would mean any brightly coloured wall plaques or dealership furniture would be underexposed and, therefore, dull anything brightly coloured.

The large neon Mini sign would be utilised to add to the image.

I started with accent lights. I knew the team would obviously be taller than the car, and I wanted to ensure that any dark hair wouldn’t simply disappear into the background, not to mention their black clothing. Frame left, and just beyond the far side of the car, is a Godox Witstro AD360, firing through a gridded beauty dish at a height of 2m and angled down towards the team. It was firing at an output of 1/32.

Frame right, and again at a distance that was just beyond the far side of the car, I placed another Witstro AD360. Another beauty dish and grid were used at a height of 2m. The output was slightly higher at 1/16 and 1/3rd due to the slightly further distance. Also, the gentleman on the left of frame was reflecting more light from his head than the gentleman on the right of the frame.

The key light was a Godox Xenergiser 600Ws, firing through a 150cm Octa. To control the fall of light, and restrict it from lighting the background as previously mentioned, I fitted the honeycomb. The head was angled downward, again to reduce any likelihood of light pollution to the background, and it was raised to 2.5m, which was the maximum ceiling height. It was set to fire at 1/8th. It was placed alongside me and just to my right, as I needed to be central.

Last but not least, I added three speedlights with blue gels. Each were laid on the floor at the far side of the car. The gels were each held in place using stofens, which some would argue would cut the output, which is true. However, it also aids in dispersion of the light, and more importantly, it’s a really simple and effective way to clamp the gels in place. Each speedlight was set to an output of 1/32.

Using a high shutter speed aided in under exposing the interior. 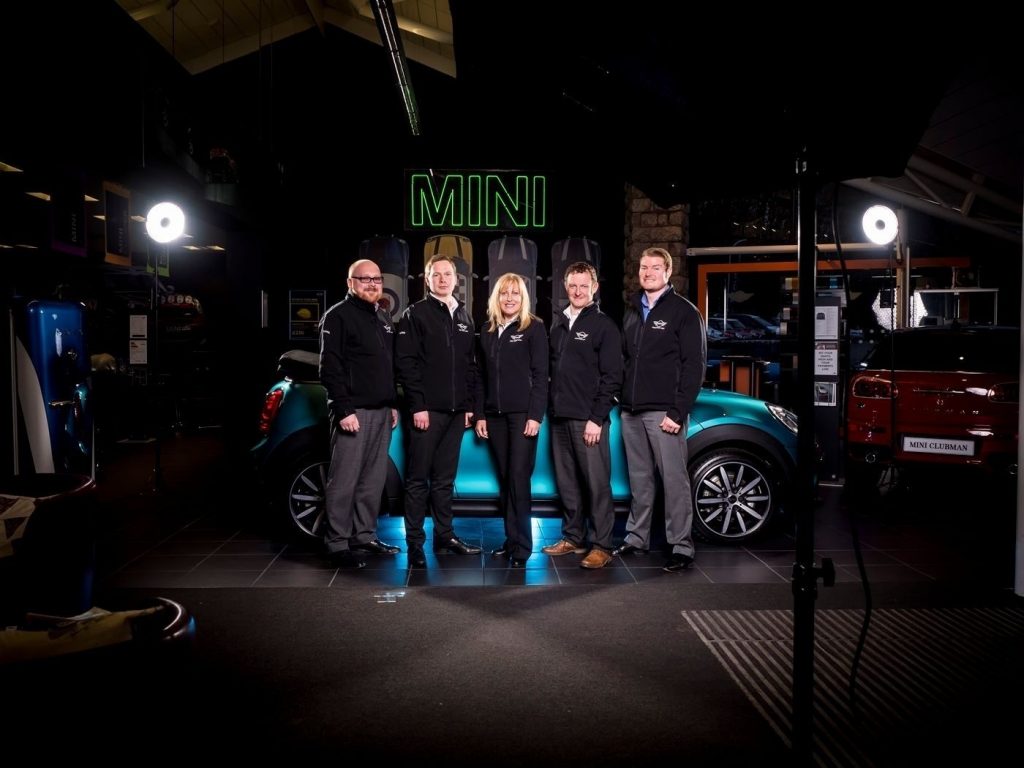 This is a pull back, or behind the scenes (BTS) shot. Exactly the same settings, just taken from further back and at 17mm. 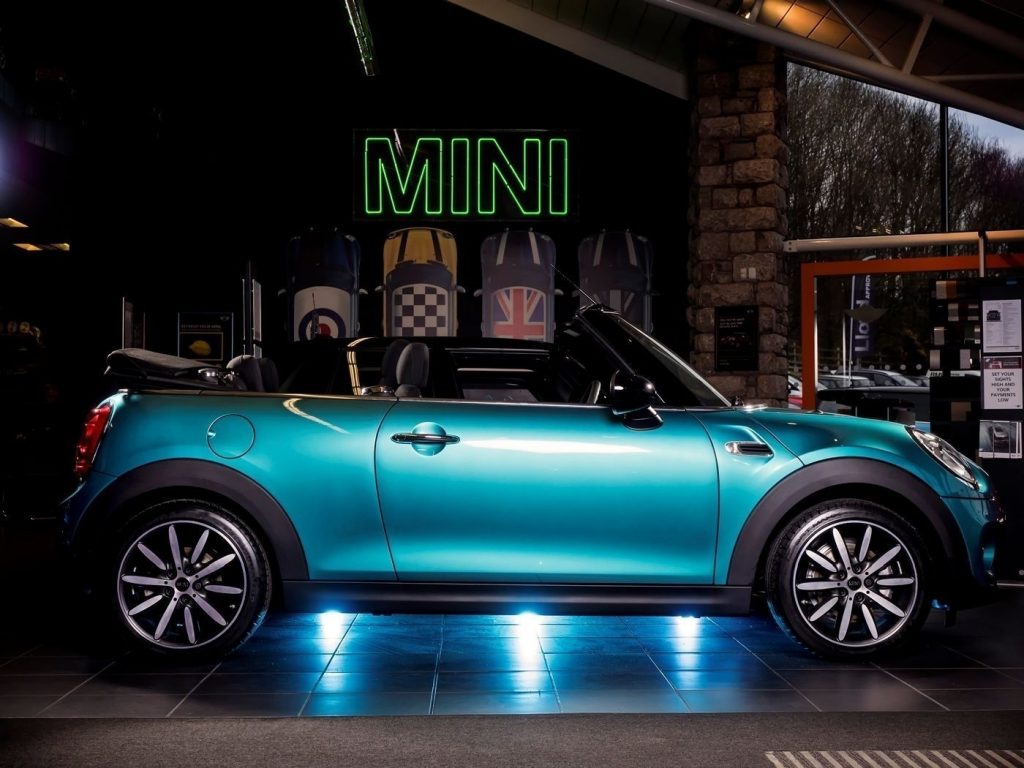 Now, whilst developing the lighting for the above image, the young lady from the marketing department happened to see final test image, and asked for that to be included, as it was the latest convertible Mini, and also the reason we chose the car for the team shot, along with its vibrant colour.

Again, same settings as the first image for the team shot.

Due to the low power settings utilised for the image, the two accent lights could easily be exchanged for speedlights, and you would need to set them to around 1/8th, possibly nearer ¼, depending on the type of grid system you utilise.

The key light may be a little more problematic due to the required power output. However, doubling up with two speedlights on one of those twin hotshoe jobbies, and both set to around ¼ and 1/3rd power output, would match the output of my octa, and still give you a workable recycle time. You could actually manage with one speedlight at damn near full power, but the recycle time would suffer. Something else to bear in mind is the fact that speedlights have built-in reflectors to aid in the projection of the light. This means they don’t fill softboxes too well if firing forward. There are now many speedlight dedicated softboxes that work extremely well due to their design which configures the speedlight to fire into the back of the softbox, therefore aiding a much better dispersion of light.