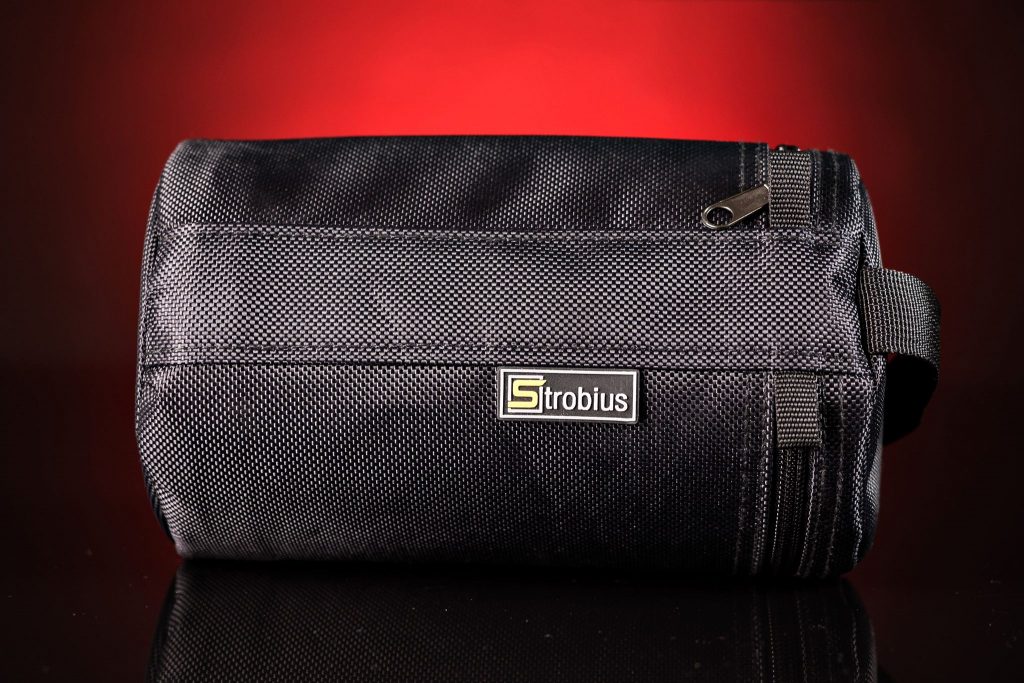 Arriving in a tightly packed box, I had two identical, nylon cylindrical cases. One contained a 50cm Strobius StrobiStrip, whilst the second contained a 100cm model.

After removing the modifiers, the first thing that struck me was the quality of the materials and construction. The diffusion panel seemed quite thin, yet durable, with four lines of stitching providing an extremely strong bond to the main nylon body. This theme of quality and care extended throughout the product. 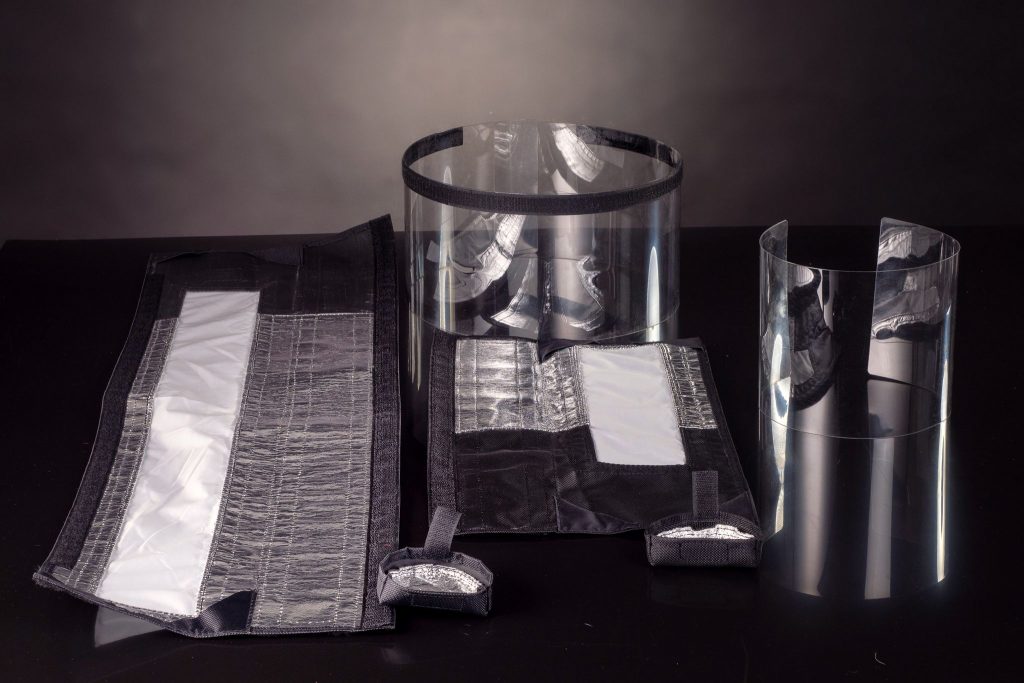 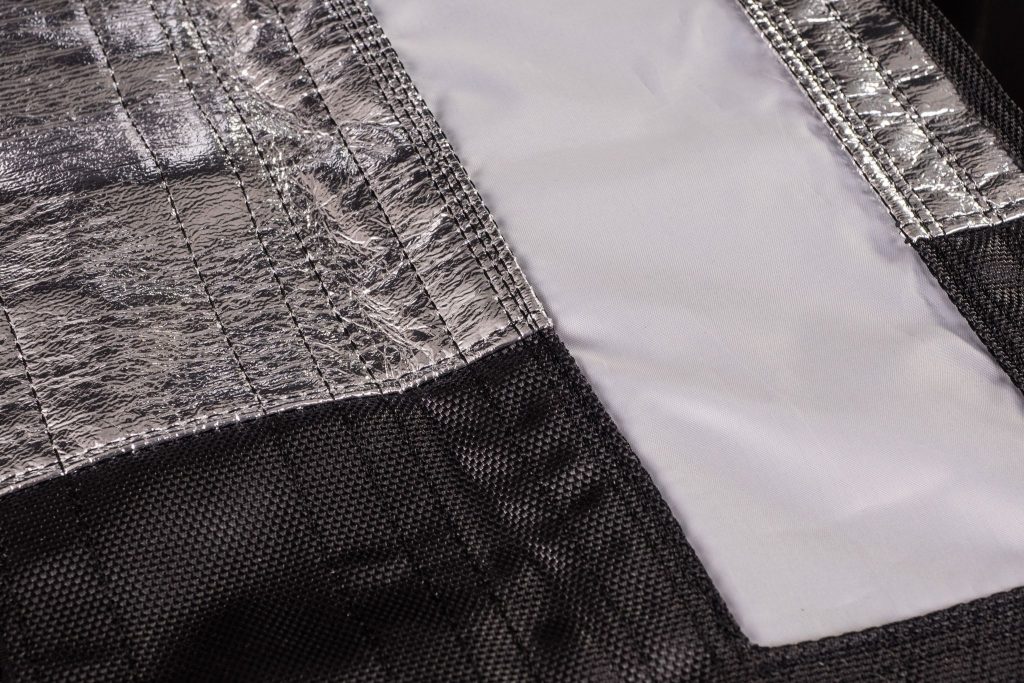 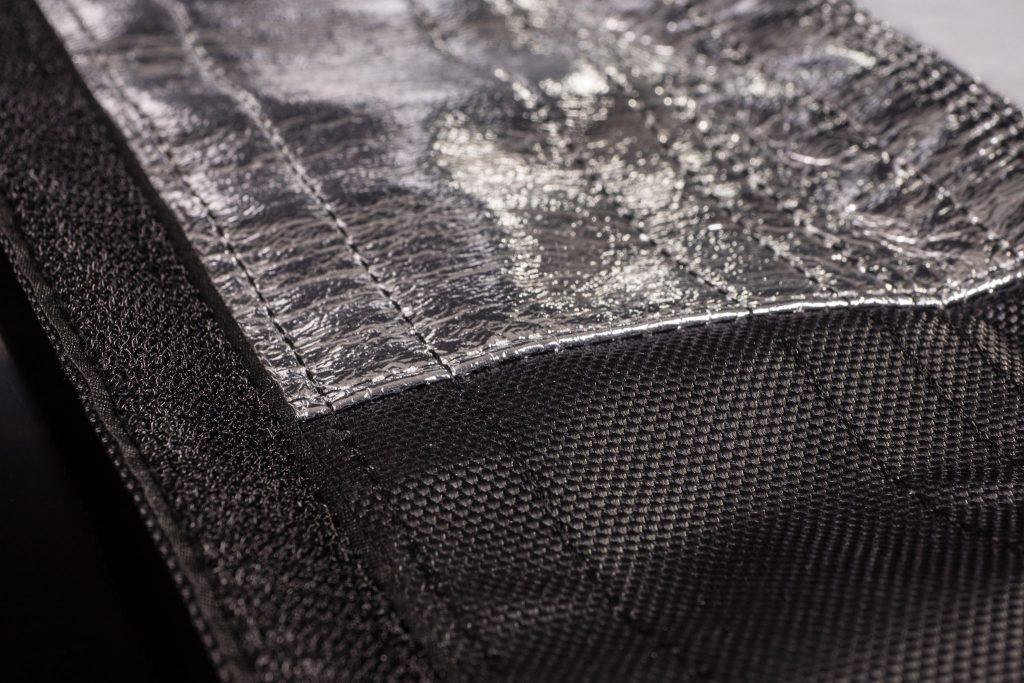 Whilst I was certainly impressed with the workmanship and quality, I wondered just how easy they would be to put together?
There was a clear plastic or acetate sheet which is laid over the inside of the diffusion panel and held in place with corner pockets. Quick and easy. The tricky part was rolling it into a semi circle to be able to anchor the side with the hook and loop strip. Having now done this several times, I have to say it becomes very easy very quickly. Like folding those infernal wire framed reflectors, it’s easy after the first time. The larger model actually turned out to be a little easier, as the acrylic sheet has a strip of loop material bonded along one edge, which allows the anchoring of the sheet to be quite quick and confident.
The StrobiStrip then becomes a tube affair with a flat back. One end is topped off with silver lined end cap, held in place by hook and loop. This leaves the opposite end to take the speedlight of your choice. 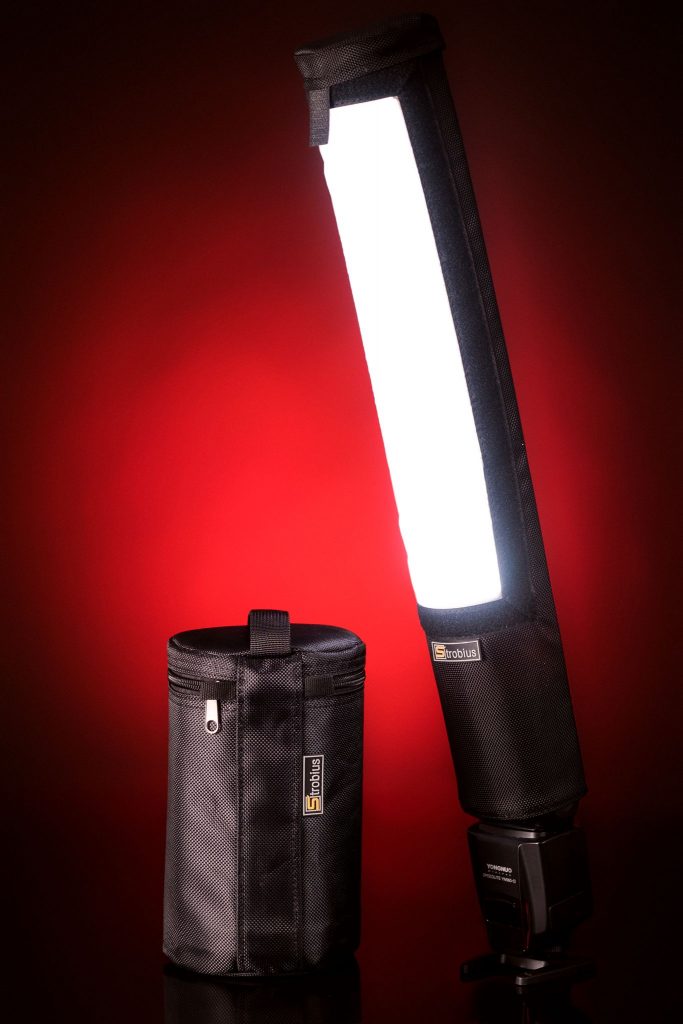 Initially, I placed the speedlight in flat, in line with the rear panel. I soon realised the weight would cause the head of the speedlight to change position easily. I then rotated the head of the speedlight within the modifier by 90 degrees. This meant the speed light could be clamped with the StrobiStrip in a horizontal position, without the speedlight sinking or suddenly changing position mid shoot.
The fit was surprisingly good, and due to the tension caused by the acetate sheet, worked very well indeed.
So how well does it perform?
Given the fact it is a tube, with the light source at one end, I expected to find a measurable drop in light output at the far end of the modifier, when compared to the edge of the diffusion panel nearest the speedlight. This can actually be seen in the image above. I had the speedlight head zoomed to 85, but it would have been far better zoomed to the maximum available.
So how well did it work in a shoot scenario. I worked with one of my photographers, Wayne, to create a water shot. We set the StrobiStrip 50 frame right, and gel’d it red. The StrobiStrip 100 was set frame left with a blue gel that didn’t completely cover it. The bottom quarter was left uncovered, as it was below the shooting target area. 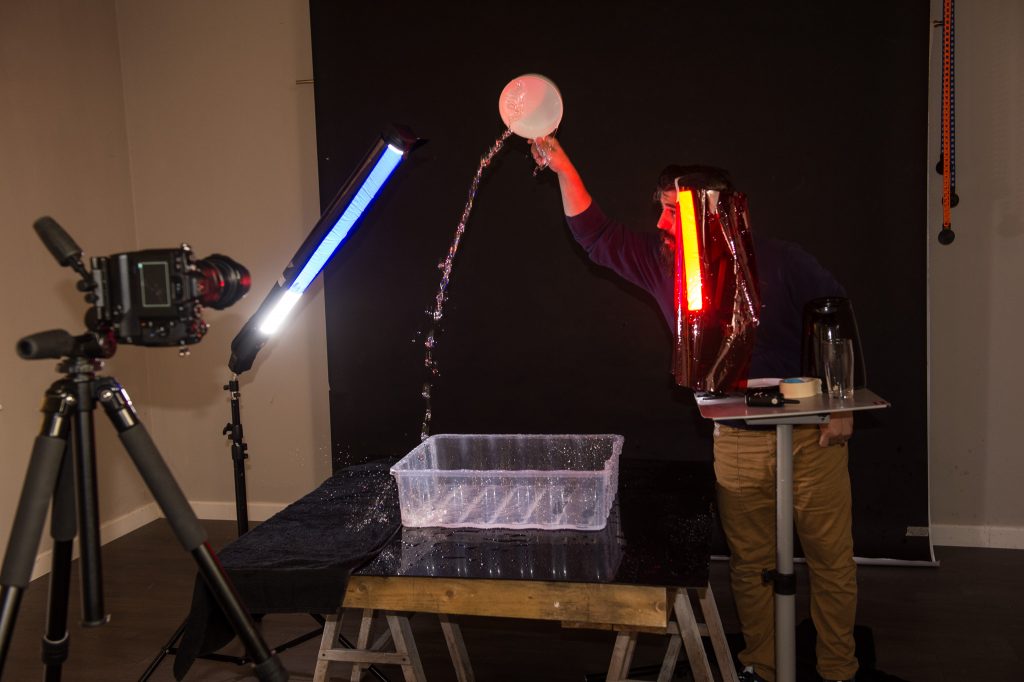 We got the image we wanted, and they worked nicely to create a controlled strip of light over a specific area that could be used for a targeted image. 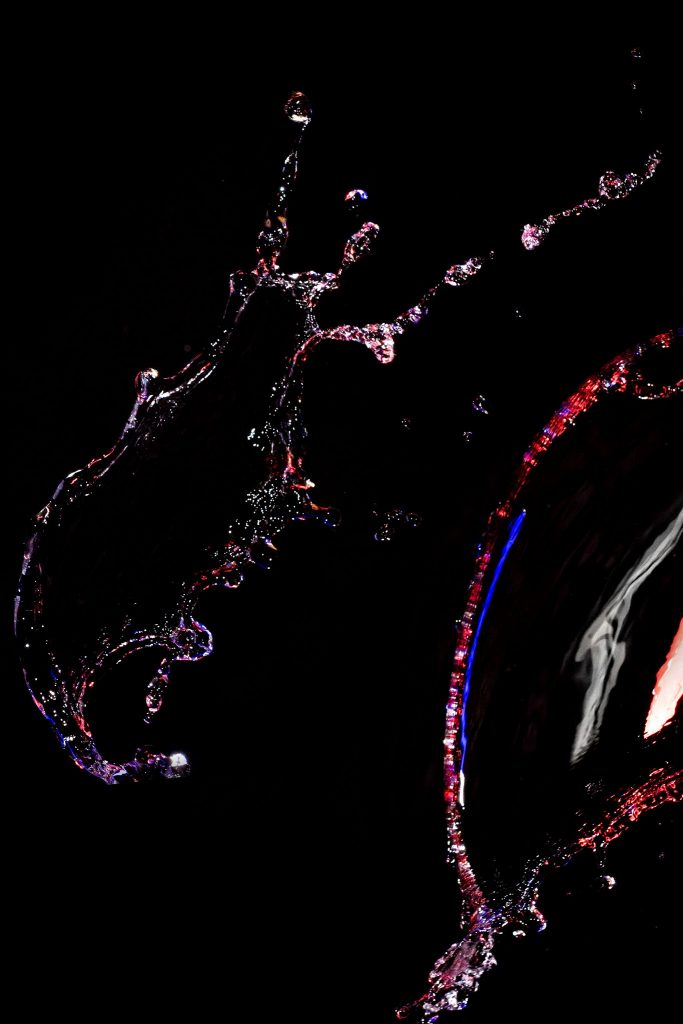 So what of the diffusion abilities, and how usable are they in portraiture. To this end, Wayne and his beard were thrust in front of the camera. And I have to say, I was pleasantly surprised by the results. Yes, they eat a fair amount of the light, but not as much as I expected. The high quality silver reflective lining obviously did its job very well. I set the two Strobius StrobiStrips either side of Wayne, and then placed an Elinchrom studio head firing through a 100x100cm softbox as the key. 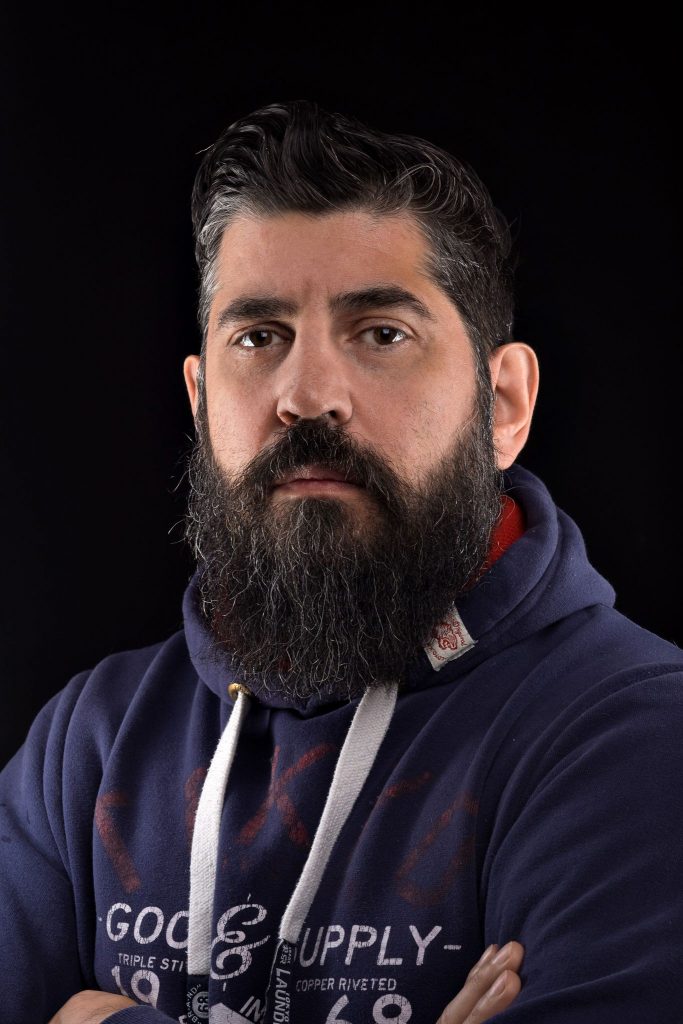 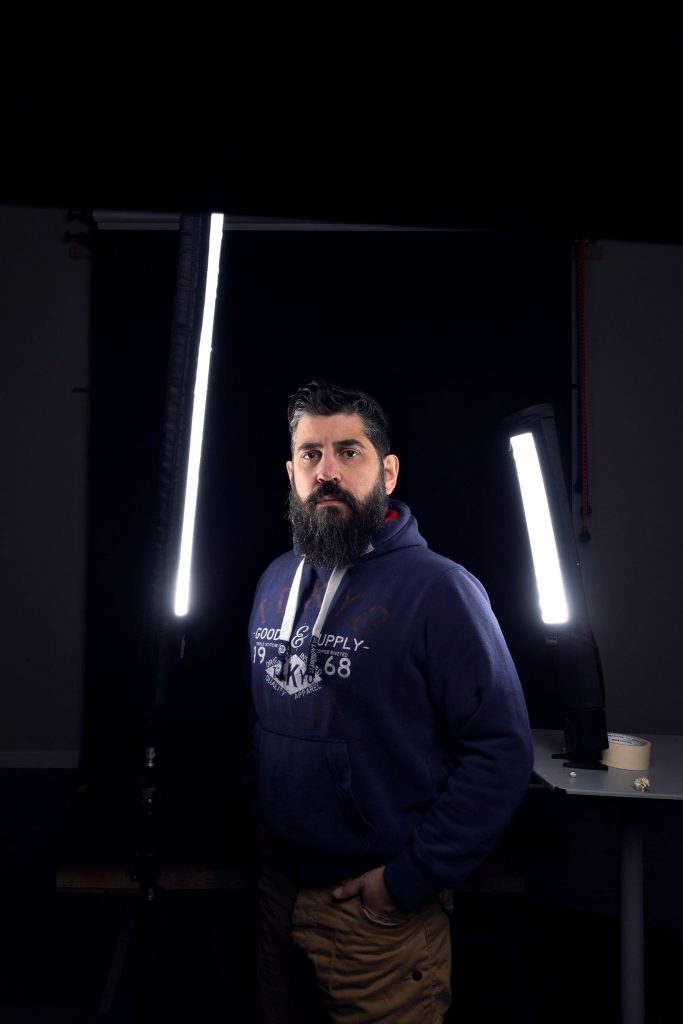 The Strobius StrobiStrips operated far better than I expected, if I were to be honest. They pack small, are quick and easy to assemble, and I feel they actually represent good value for money. I’ve previously paid similar amounts for modifiers made from card. Don’t get me wrong, I still have and occasionally still use those card modifiers. But these Strobius StrobiStrips are in a different league with regards to the quality of materials, workmanship and the obtainable results.
I’m seriously looking at the 150cm model.

Oh, and just as an aside. My main location kit is the ELB 400 and the Strobius StrobiStrip doesn’t quite fit the Quadra head. Well, not unless you don’t quite close the hook and loop at the head end, and use a secondary strip of hooks as a fixing strap around the back of the head.