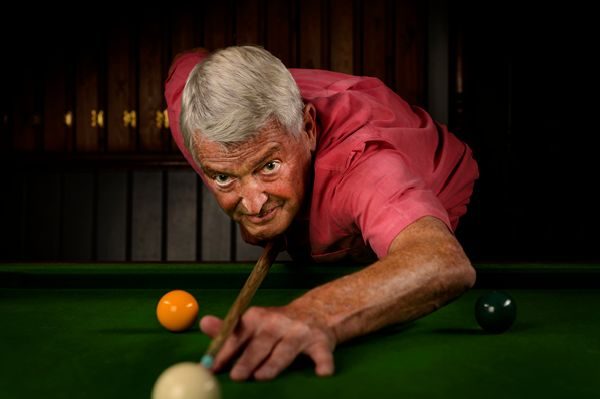 Meet Joe Harrison. A gentleman who has just celebrated his 100th 100 break in snooker.

I was asked by a local working men’s club to create the image, which would be framed and hung on the club wall.

Like a lot of snooker halls, the lighting is fairly dim, and this is accentuated by the overhead table lights. Here, the overhead lights were fluorescent tubes, and their colour temperature wasn’t particularly conducive to the atmosphere of the room. This was mainly due to the fact there were four tubes, and even without a colour meter, it was fairly obvious at least one of the tubes was a completely different colour temperature to the other three.

No matter, as I wanted to take full control of the lighting to create the atmosphere as I felt it should be. Just enough light to hint at the room, but almost all of the on our main subject, Joe, with enough fall off to create that classic overhead triangle of light often seen in the promotional posters such as “The Color of Money”.

As there isn’t a vast amount of room above the table, the best way to recreate the light would be two light sources, one either side, and both tightly controlled. I used an ELB 400 with an action head connected to port B and firing through a horizontal stripbox with honeycomb fitted. It was set to fire at an output of 3.0. The stripbox was placed along the table edge (frame left) and about a foot above it, just in line with Joe’s head and shoulders. This allowed the light to illuminate Joe and that end of the table.

A second ELB 400 was set up in an identical manner on the opposite side of the table. Same height and attitude, and the same output. They were both angled downward toward the centre of the table.

Finally, I used a third ELB 400 and action head, again connected to the B port at 3.5. It was firing through an 80×80 folding softbox at a height of about six feet, with the box acutely angled down to fill the table top in front of Joe, and provide a lift to his face which otherwise would have been much darker due to the honeycombed stripboxes either side of him.

To be honest, it was very straightforward, and I was in and out of the place within 30 minutes or so.