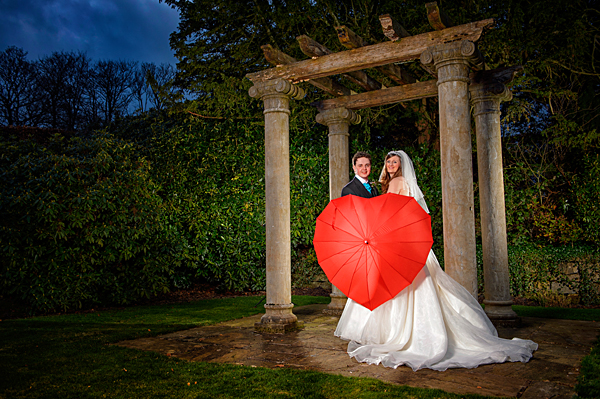 In the grounds, you will find a lovely stone built gazebo. It photographs beautifully, and with a little added light, the backdrop of greenery really comes alive.

I carefully placed a Lencarta Atom 360 in line with the leftmost pillar seen in the above image, with the head married to a gridded beauty dish, and firing towards the groom. This provides the accent light seen along the grooms shoulder and hair, along with the highlight seen in the brides hair. Output was set to ¼.

A second Atom 360 was placed behind the bride and groom, just beyond the far columns, and set to light the hedge beyond. It was aimed towards the corner, allowing the light to cover both hedges. A beauty dish was used for this, but without the grid, and with an output of 1/8th.

A third Atom 360 was placed just out of frame right, and used to light the hedge to the right of the colums, so as to provide continuity with the other Atom. This was mated to its standard reflector to keep the cone of light narrower, and not overlight the ground or column nearby. The output was set to 1/8th.

The couple were lit using a Safari mk1with one head and output set to A+B to provide a maximum of 600Ws. It was on a high lightstand and firing through a 120cm folding Octa with an output of ¼. 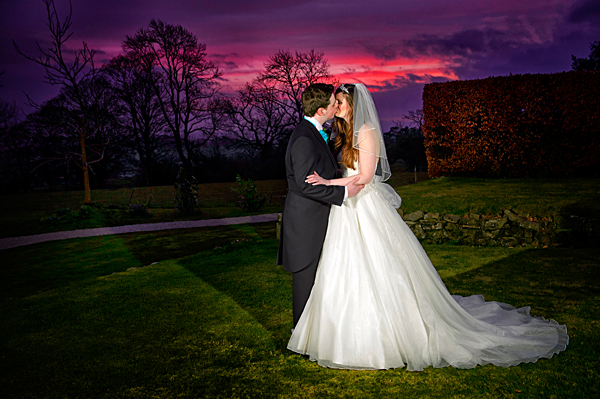 This was taken not too far from the first image. The sun was setting, and the colours within the sky were very washed out at best. However, there was just enough to be interesting, and with a bit of foresight, could be fairly dramatic.

The first thing I did was set my white balance to fluorescent, which produces that lovely mauve colour between any oranges and blues in the sky. It also deepens the blues a little too. I also underexposed the for the ambient by a good stop and a half, although it may have been slightly more than that, looking at the above image now.

Now, the above two actions had an appalling effect on our bride and groom. They were rather dark, and definitely looking rather ill! I used the Atoms to light the couple, and fitted standard reflectors to each, along with the supplied green solid disc colour gel. The supplied gels aren’t actually true colour correction gels, they just so happen to be orange, green, red and blue. I wasn’t particularly worried about the fact the green gel would produce a much stronger green caste than a true window green gel, but the fact the brides gown and groom’s shirt were true white, I knew I could colour correct quite easily in post within Lightroom.

I had three of the Atoms in use, all at head height, and all at an output of ¼. One was placed camera left, the second was alongside me, and the final third Atom was placed camera right. One of the advantage of this layout is the fact they each help fill some of the shadowing of the other two Atoms on the bride and groom, softening the light a little, bearing in mind I was using the Atom’s standard reflectors.

The downside to this technique is the fact you get multiple shadows on the ground, which can be distracting. 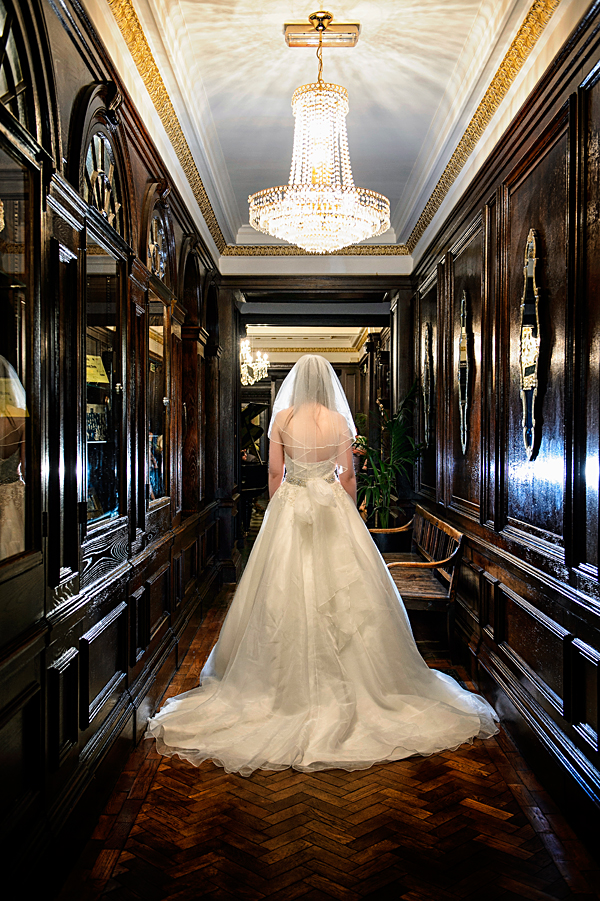 Eaves Hall has a number of features that can easily be overlooked, and the dark Oak panelled corridors is one of them. Yes, they are dark, but provide a really nice frame for the bride.

Lighting was very straightforward. An Atom 360 on the far side of the bride, creating the rim light and also highlighting the texture and mouldings on the wall panels. A beauty dish without a grid was used, along with the output set to 1/32.

The bride was lit from the camera side by another Atom 360 raised as high as possible, and firing through a folding 80x80cm folding Octa at an output of 1/8th.