The Sparkling Bride at Farington Lodge

There’s a little bit of a back story to this. Well, not the image, but the bride. I had an email requesting a visit, and I thought I recognised the surname. Turns out her mother was a friend I had lost touch with twenty years previously.

So, getting back to the above image, which was taken at Farington Lodge. Victoria had put together a pinterest board with various creative images she liked, a lot of which were mine from previous weddings. This particular idea was spawned from a firework image Victoria had seen, but felt it wouldn’t be practical on the day. I think she expected it to take far to long to set up.

I needed a long enough exposure to capture the writing, along with a pop of light to correctly expose Victoria and Tony. So, I definitely needed a tripod!

Lets start with the lighting. The tree is actually lit by a floodlight, so I made use of it. I placed a Lencarta Atom 360 behind the groom and bride to provide the rim light, set to 1/32nd and firing through a beauty dish. No grid.

Frame left is another Atom 360, firing at 1/16th through an 80×80 folding softbox, which is providing the overall fill for the bride and groom.

A third Atom 360 is frame right, firing through a gridded beauty dish at 1/8th output, providing some textural skim to the brides dress. It also provides some highlight to the grooms suit. 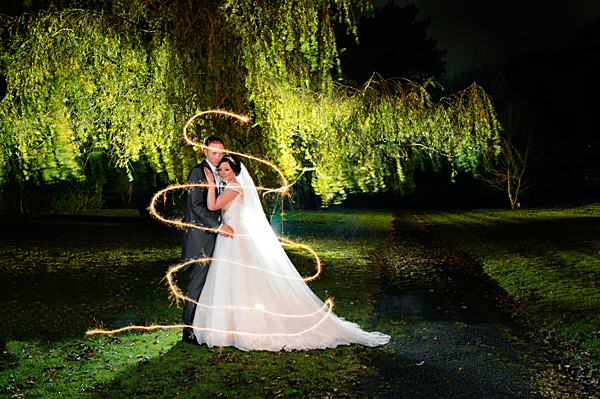 The above image is just a different take on the sparkler. The lighting and camera settings are identical to those used above. 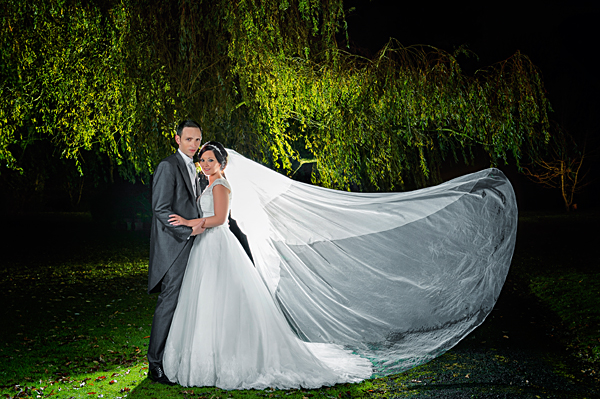 No sparkler this time, so the shutter speed can be upped, although I still want to capture the atmosphere of the surrounding trees and grounds. The settings for the lights, along with their positions remain unchanged. 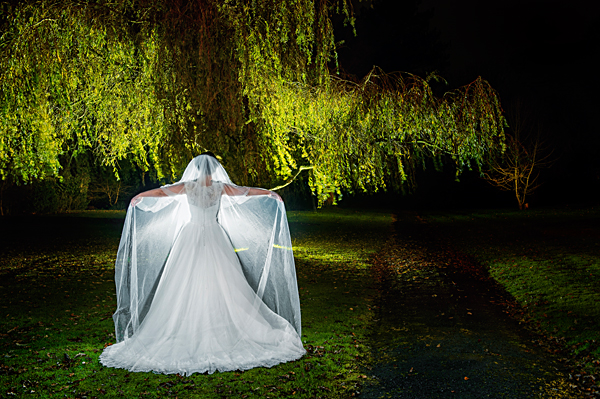 The final image is all about the dress. The lighting is still pretty similar, but I have moved the rim light a little closer and turned it down a little to 1/64th, which is evident from the reduced light on the ground immediately either side of Victoria.