Bridal Portraits With One Light

This was from Lee and Hannah’s wedding in July 2014. I was fascinated by Hannah’s quite arresting gaze, and had the idea for this particular image from early in the day.

It’s actually lit by a single light source, boomed above me. Access was a little tight, as there is a piano between the couple and me. As you do.

I particularly like the red wall in the lounge area behind the reception of the Park Hall Hotel, and quite liked the contrast it threw up against the white bridal gown. Once Hannah and Lee were positioned, I had the best man hold the boomed Lencarta Atom 360 above me, and angled towards the couple. The Atom was paired to the atom specific folding octa, which also had the honecomb fitted so as not to cause unwanted light bounce from the ceiling. The output was set at 1/32 and easily adjusted on the fly via the Wavesync Commander unit.

Want to see my workspace? 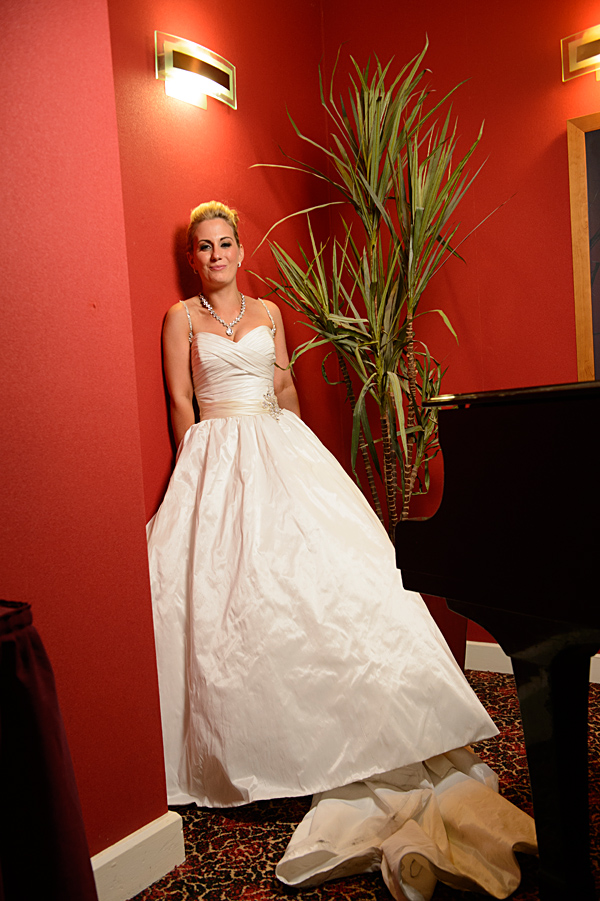 Now, how many of you pursed your lips and drew breath when reading the camera settings?

I bet it was the ISO that upset you. Well, to be fair, the D4 handles 1600 better than my D2X used to handle 400, which is neither here nor there, and doesn’t really matter. The reason I was using 1600 was down to the fact I only had room to get the one light in. Lee and Hannah were in a corner (well, a plant was in the corner, TBH), and I couldn’t get additional lights anywhere near them due to the piano. This was one of those situations where you either run what yer brung, or go home. The ISO of 1600 also meant the wall light gave the gentlest touch of accent light (albeit a bit warm from the tungsten bulb!) to Hannah’s hair and shoulder.

Now, the above image was actually the last image of the informal bridal portrait session, and the first images were also obtained using only one light source. The reception area at Park Hall has one of those fascinating black and white tiled floors, and it’s been an area I’ve often wanted to do something “interesting” in. Like a lot of hotel receptions nowadays, it tends to be full of tables, chairs and jewellery cabinets. I wanted the floor to be quite prominent in the image, but I also wanted the bride and groom to be isolated from all the distractions of the reception area.

The obvious thing to do was to light the couple from overhead.

In truth, the light isn’t actually dead overhead, but brought forward a little, so more detail can be revealed in their faces and also the dress. I dialled the ISO down to 100 so as to effectively nullify anything by way of lighting from the reception area. A shutter speed of 1/200th sec and an aperture of f5.6 was used, again to crush anything by way of ambient light. The Atom was set to ¼ output through the folding octa I mentioned earlier. Again the honeycomb was in use to restrict the light path, and ensure it didn’t accidentally reveal the surrounding clutter in the reception.

Want to see one more? 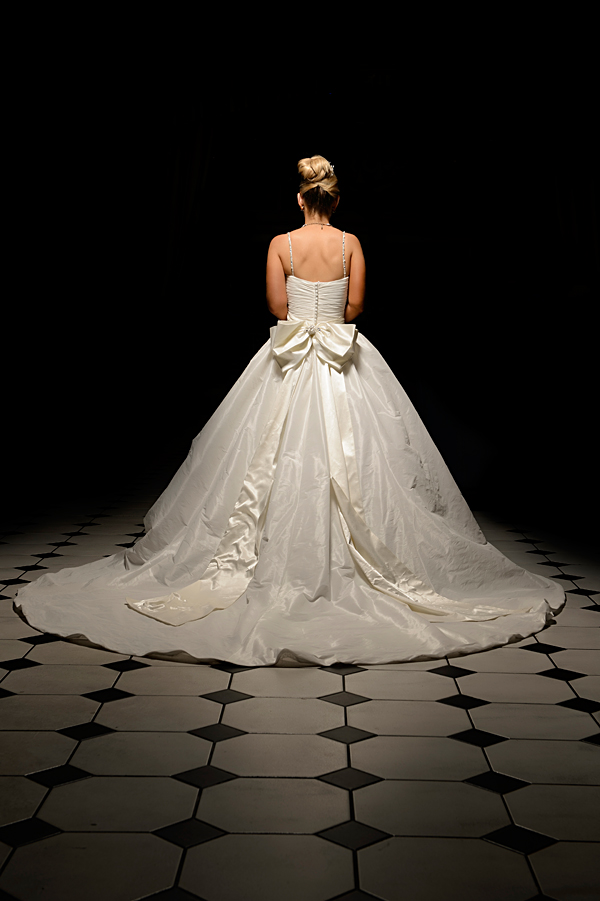 Pretty much the same settings, except the aperture was increased by 1/3rd of a stop.