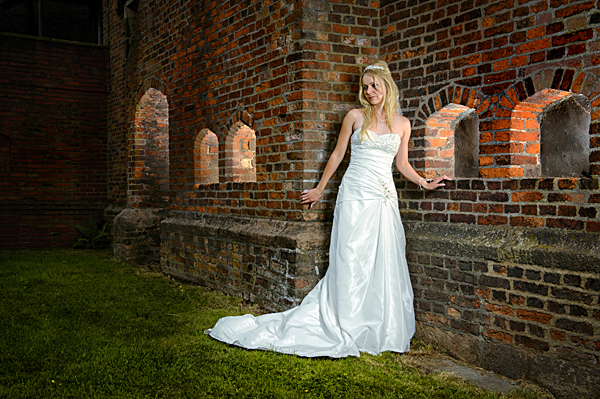 In each alcove, I stood a speedlight set to ¼ output and with a stofen fitted. The stofen was only to make the speedlight act as a bare bulb, and therefore better fill the alcove. The first four alcoves were a piece of cake. The speedlights neatly stood upright, leaning against the nearside wall, and therefore out of site. The furthest alcove was more of a problem due to its size. I didn’t want the light to originate at the bottom of the alcove, as that would be at ground level.

I managed to fit the speedlight to a monopod, and leand that against the wall, hidden from sight. This particular speedlight needed to be set at ½ power due to the larger alcove.

Main light source for the bride was supplied by a Lencarta Atom 180, firing at ¼ through a custom folding 90cm Octa at head height and camera right.