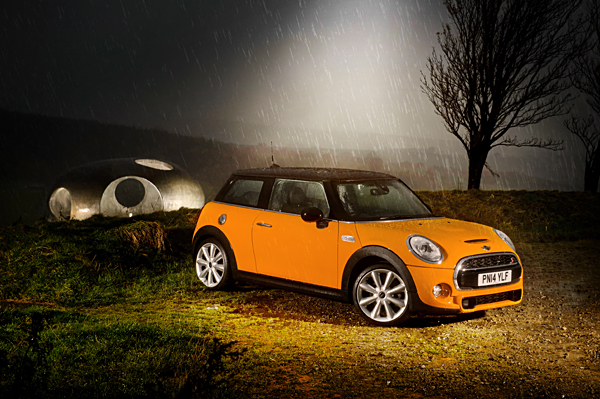 Lloyd Mini in Colne have been clients and good friends for quite some time. A little while ago we were contacted by the manager, Matt, and asked to photograph the latest released Mini with the intention of having the image on a wall in the handover bay. I asked what he would like, and his answer was “Something interesting”.

It was cold, blowing a bit and chucking it down. We had the car for a day and a half, and couldn’t rely on the weather being any better the next day, so we had to get at least one image on the first day, and incorporate the weather into the shot.

Lighting an object in the studio, and making it interesting can take from one, to half a dozen or more lights. Out on location, you’re in another ball game alltogether.

The above location, for those who are intrigued, is the Atom panopticon above Wycoller village. I felt that given the weather, the panopticon may give an other worldly feel to the image with the right lighting and atmosphere.

The first thing to consider was the ambient light. Although cloudy and raining quite heavily, I opted to lower the ambient by shooting at an ISO of 200, and even with a shutter speed of 1/60th sec and an aperture of f5, it underexposed the scene by around two stops, making the rather flat grey sky much darker and menacing.

The first light is a Lencarta Safari II camera left, firing at ½ power through a 150cm ProFold Octa and raised to the limit of the light stand. It’s basically firing straight onto the side of the car. The second light source is another Safari II camera right and head-on to the Mini’s front quarter. It’s also mated to another 150cm ProFold Octa, firing at about ¼ output, and again raised as high as the lightstand would allow.

Inside the car, on the back seat, is a speedlight set to ½ power, and firing through a small 5 in 1 reflector that’s stripped down to the diffusion panel. It’s not really doing a vast amount, but it is increasing the visible detail within the car. You can see the cover of the rear quarter panel, and also black leather seats etc. We had tried using an Atom at a higher output, but there was just too much within the car, particularly when taken in context with the concept of the overhead “alien” light. As we could really use the Atom elsewhere, we swapped it out for a speedlight.

Talking of Atoms, I placed two Atom 360 within the Atom/panopticon (get your head round that one!) Each were lay down opposite each other, and firing upward at 45 degrees towards the centre of the roof. They were both mated to beauty dishes to aid the light spread, and both fired at about 1/8th power output.

At the centre of the panopticon is supposed to be a metal sphere on a short pedestal, representing its nucleus, except it had been nicked! So we placed another speedlight within the pedestal, with it’s stofen visible. You can just make it out in the image. The speedlight was set to ½ power.

Three further speedlights, all at ½ power each, were placed around the outside of the panopticon, at around three feet distance from the structure, and all with stofens fitted. Two were placed on those small flexible mini tripod thingies, and the third was propped on a couple of rocks.

An Atom 180 was placed behind the car on a low stand to illuminate the bank at the rear of the car. It was firing through a standard reflector at ¼ power.

Another Atom 360 was placed far frame left, and was used to even out some of the lighting across the car, but mostly to light the green bank and ground that is frame left, in front of the panopticon. This used a small folding Octa without the diffusion panel at ¼ output.

The overhead alien light? Well……… that was a bit of post processing with poetic licence 🙂

Before moving onto the next image, I have a confession to make.

Wayne assisted me with this particular project whilst suffering with flu. No, I mean the real McCoy. By the time we finished this shot, we were both soaked to skin and squelched when we walked or sat down. I think I almost killed him 🙁

Mind you, he still came back the next day to finish the shoot, albeit looking very grey. 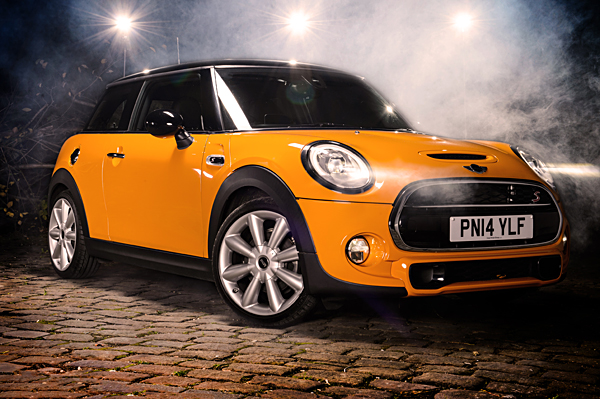 This particular image was taken outside the studio, as I felt the cobbles would make a nice contrast to the smooth and highly polished car. We had a Safari II camera right, firing through a 70×100 softbox at 1/8th power at about head height. It’s barely out of frame and quite close to the car. Hence the low power setting. I also wanted the light across the bonnet to remain a little more subdued than the rest of the car.

The second light is another Safari II camera left, firing at ¼ output through a horizontal 200x40cm stripbox on a boom above head height.

An Atom 360 was placed far left, and at a height of around 70cm, firing at ¼ output through a gridded beauty dish. This was used to illuminate the wheels and foreground.

Behind the car, and at head height, we placed three speedlights, all with stofens, and all firing at ¼ power. They were to provide a little highlight to the black roof, but mostly to add a bit of drama to the scene.

The final touch was the lighting of three smoke pellets behind the car, and hoping the light wind would carry it gently over the car.