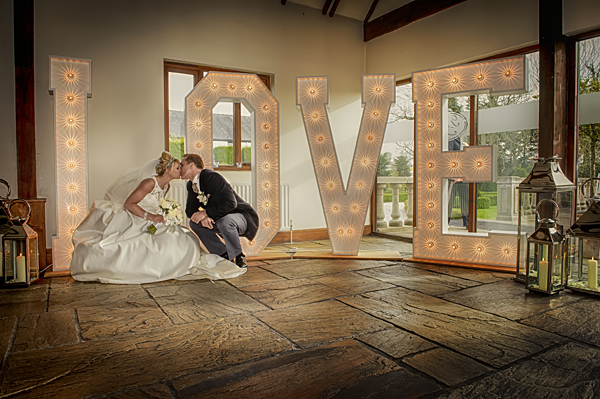 This is another image from a wedding at The Great Hall at Mains. The fabulous LOVE sign was provided by Typical Type and created quite a stir, I have to say 🙂

The trick here was to very carefully balance the ambient light coming through the windows behind the letters, so as not to lose detail beyond the window, and also not to lose contrast around the letters and the couple. I had to use an ISO of 800 to ensure I caught the light eminating from the letters themselves, combined with a shutter speed of 1/80th sec. The bulbs on the letters were typical tungsten affairs, which would give a nice warmth to the image. Warmth in the lettering was far more preferable to the a cold blue glow from outside, which is what I would have got if I had used a white balance of tungsten. I used a WB of “flash”, which matched the outside source, and would also match the speedlight I was going to use to fill the couple, and ensure the detail in Caroline’s dress would be visible.

It was nothing more than an SB 900 on camera, set to manual with an output of 1/8th and firing through a Fong Dong.