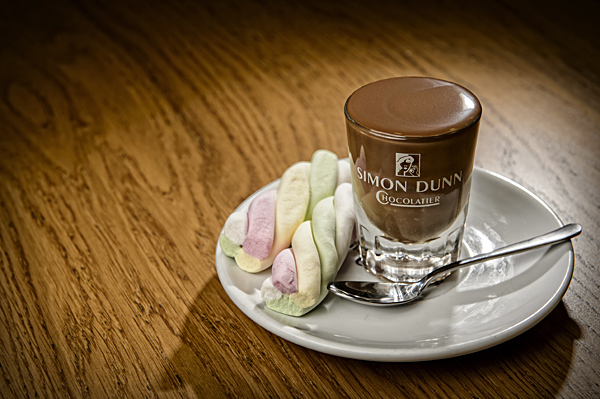 This image was part of an advertising portfolio for Simon Dunn Chocolatier in Preston. My technique for food photography has been developed over a number of decades, and the technique has also developed as equipment has advanced. I have to say, the launch of the Lencarta Atoms made a lot of the usual challenges I face with food photography just evaporate.

I have 6,000 square feet of studio space, but I believe food should be photographed on location. The ambience of the venue should play a part in the imagery, and that in itself, can be a challenge. A lot of venues tend to be a little, erm….. “tight” on space between the tables, to say the least. I originally used studio heads, booms, lightstands and modifiers to get the quality of light I wanted. Ok, so some dishes could work well with speedlights, and on occasion, I would use them. But the extra power meant I could use smaller apertures and therefore greater depth of field if I needed it.

Yes, I know most of my food work is actually reliant on a shallow depth of field to isolate particular parts of the dish, but there’s no real substitute for raw power when you need it.

From studio heads, I moved to my first location kit. The original Lencarta Safari. What is now referred to as the classic. Often married up to a boomed 120cm octa for overhead, and a gridded beauty dish for clipping or accent. A lovely bit of kit.

This was replaced by the Safari Li-on, using a similar set up. The asymmetrical set up made things a little easier, and the faster recycling was a boon. Not that the food was going anywhere, but some food does deteriorate very quickly.

My usual food kit is the Atoms and their dedicated modifiers. That said, I do have a custom 70cm folding Octa I use for the overhead, which seems just about right sizewise. The Atom beauty dish fitted with the grid seems to be perfect for clipping or accenting.

The whole setup takes up much less room and just works beautifully.

Here, I had the custom 70cm folding Octa mated to an Atom 180. This was placed a little to my left, and about shoulder height. The output was controlled by the Wavesync system, through which I dialled the power to 1/8th.

An Atom 360 was mated to a gridded beauty dish, and placed at the far side of the table, firing towards the camera and at a height of around a foot higher than the subject. It was nearer the table than the main Octa, and set to an output of 1/8th.

I have to say, the chocolate smelt amazing, which is rather tortuous when I’m on a diet.

My food photography can be found at : www.gastrophoto.co.uk