Snow White and her Groom 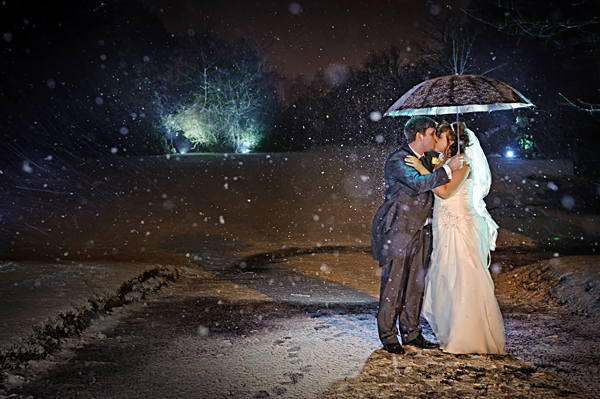 This image was taken at Farington Lodge during the frequently lousy weather we had over the winter months of early 2013. In fact this was taken on the 22nd April. Due to the frequent snow showers that had taken place throughout the year up until this point, I had the distinct impression that Kerry would be disappointed if there was no snow on her wedding day, to be honest.The day was pretty miserable and we were subjected to showers, which is fine, as there’s plenty of stuff I can do in light or heavy rain, if the bride and groom are game. The fairly regular questions from both Kerry and Kevin asking about the possibility of a photograph in the snow tended to make me believe they were hoping against hope that there would be snow at some stage. Farington Lodge has a lot of hidden little corners that make great set pieces if you go looking for them  🙂

Anyway, as we were finishing, Kerry overheard one of the evening guests mention the weather had turned snowy as they arrived. Her eyes lit up and her grin couldn’t have been any wider. Why on earth would I not want to do this for my client?

I quickly set up a speedlight with a stofen type diffuser fitted and at a height of around four feet, pointing dircty towards the camera and just beyond where I envisaged having the couple stood. Why the stofen? Yes, it eats light, but it throws the light everywhere and especially the floor immediately below the speedlight, as well as off to both sides etc. It was set to 1/32nd output.

A second speedlight wa set up immediate camera left, firing into a silver reflective 44″ parabolic umbrella at about chest height and at 1/2 power. The reason it was positioned fairly low, (Well, low when compared to the usual height for a keylight), was down to the fact I wanted some of the light to illuminate the path to the bride and groom. Half power was need due to the distance.

I did a quick test shot with my not so amused wife Anne, mostly to check I was going to get sufficient light bounced from the rear accent light out of the hand held reflective brolly to illuminate their heads and faces. Luckily, the first test shot was close enough to what I wanted for me to let Anne retrieve the couple as I made a slight tweak to the angle of the accent speedlight at the back.

It took two shots to get the above image, the first because the couple weren’t too sure of the look I was going for, but after seeing the image on the back of the camera, the second shot was the keeper.

I had kept the ISO high, and the shutter speed slow, in an effort to retain as much of the ambient light as possible.

Incidentally, Farington Lodge is a smashing wedding venue, with very caring staff and real gift for ensuring the bride and groom have the best possible day imaginable.

Liza Ormrod, their wedding co-ordinator can be contacted at events.farington@classiclodges.co.uk or telephone 01772 421321