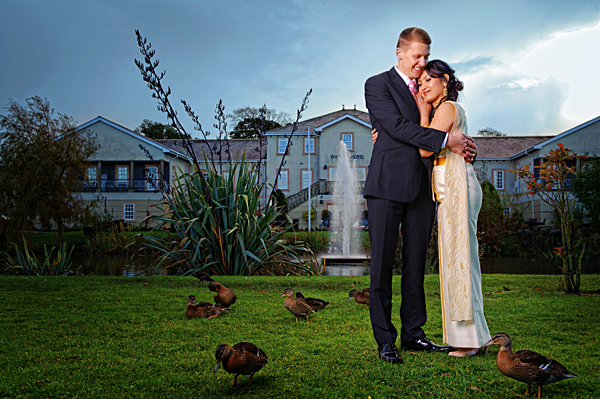 Meet Teerisara and Uladzimir, on a rather cold and damp October day at Ribby Hall in Wrea Green. This was actually the last shot of the day and I’m happy with the result. We’d already sauntered through the ground taking images near trees and elevated wooden buildings, and all to good effect. However, the last image was to be taken in front of the fountain, with the hotel and spa in the background.

The weather had been quite cold and very wet, and we were lucky it had stopped raining as we started the informal portraits. Well, lucky insofar as the rain had stopped, but the ground was absolutely sodden wherever we went. The only beneficiaries seemed to be the ducks!

The bridal couple stayed on nearby solid ground as I faffed about, setting the lighting as I deemed best for the image I had in mind. I wanted to effectively cross light them, using the sun (if it appeared) to provide the accent light, and a Lencarta Safari Classic single head, firing through a 120cm folding Octa to my left. The Safari was set to half power at 600Ws, which was more than enough to lift the couple slightly above the ambient light level, making them “pop” against the background. Luckily, the sun put in an appearance as the couple took up their positions. I’d actually resigned to taking a single shot and evaluating the outcome, and then probably going to the car to get another Safari head to set up an accent light. Guess I was very lucky that day 🙂

The ducks were an added feature! (Cheap extras that were on the breadline, working for free!) 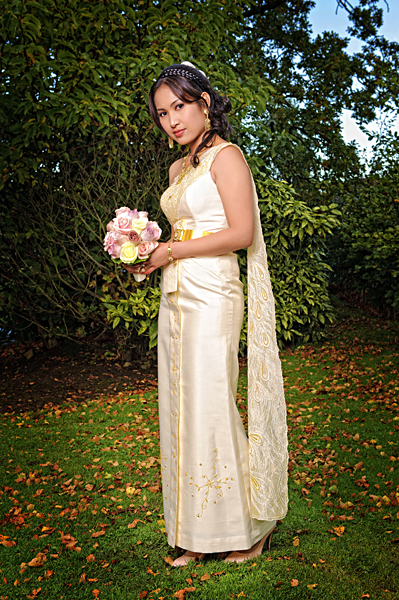 This was from a little earlier. Whilst the backdrop of trees and bushes looks “interesting”, it also reduced the ambient light further. This meant I’d have to carefully consider the dynamic range and contrast if I wanted to keep any kind of colour in the sky, rather than have it simply blow out to white.

Still with a single 120cm Octa, coupled to a Safari Classic head at ½ output, the light stand was placed camera right at and about 6’6” height. 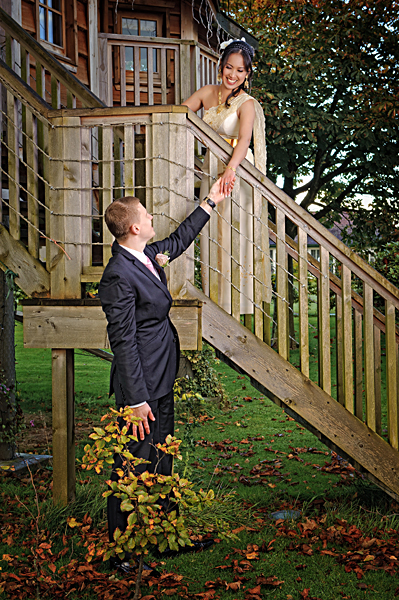 The classic Romeo and Juliet scene. Not quite as effective, as our Romeo is a very tall guy! Again, a single 120cm octa and Safari Classic head, still firing at ½ output, although a little further from the couple this time.