The Bridal Arch at the Dunkenhalgh 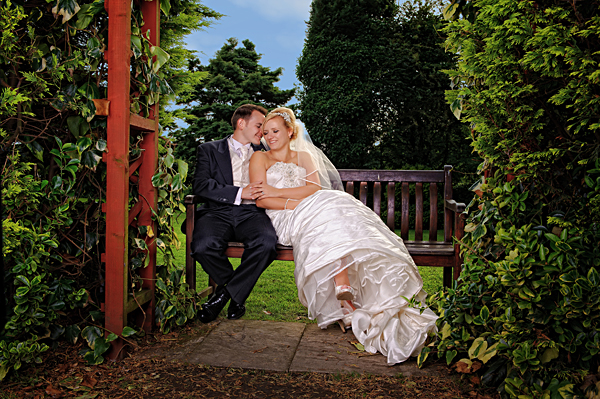 I love weddings. The people, the atmosphere, the day. It’s all good! My favourite bit? Well that has to be the informal bridal portrait session between the wedding breakfast and the evening reception. It’s a bit of a dead time as far as the bride and groom are concerned, and the opportunity to escape their relatives for 45 minutes tends to be very appealing 🙂

Meet Michelle and John, who had their reception at the Dunkenhalgh, at J7 of the M65. A very nice place with very friendly and helpful staff. There were two weddings that day, which meant we didn’t have full run of the grounds, which is bit of a shame. However, you have to utilise whatever you’re given, and in this instance, there was a very nice bench seat placed within a couple of trees that created a nice natural arch. Excellent!

The day had been sunny, but by the time we came to do the informals, the sun was quite low and on the wrong side of the arch. We still had the blue sky visible, but I needed to light the couple so as to make them pop.

I used a Lencarta Safari Classic firing through a 120cm folding octa barely camera left, and raised to around eight feet and angled down towards the couple. The initial test shot showed the accent light from the sun was still visible, but barely so. I also wanted to increase my main light so provide better coverage of the foliage, which me ant I would lose the accent from the sun.

To combat this, I placed another Safari Classic head with a 70x100cm folding softbox on a stand at a height of five feet. This was then positioned behind the right tree, and further back from the couple. It was almost in line with the couple and the sun, but I had brought the stand slightly further around so as the accent became a little more prominent. The safari was set to ½ power output. 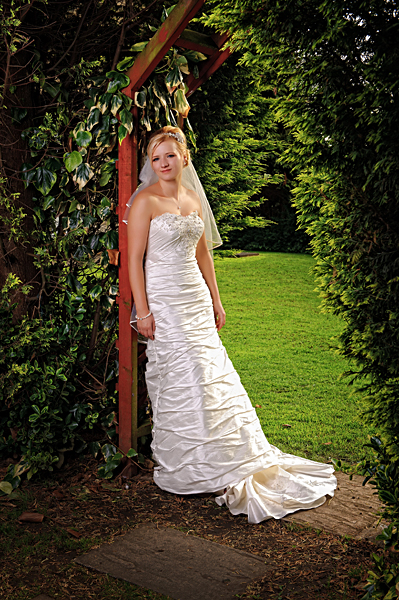 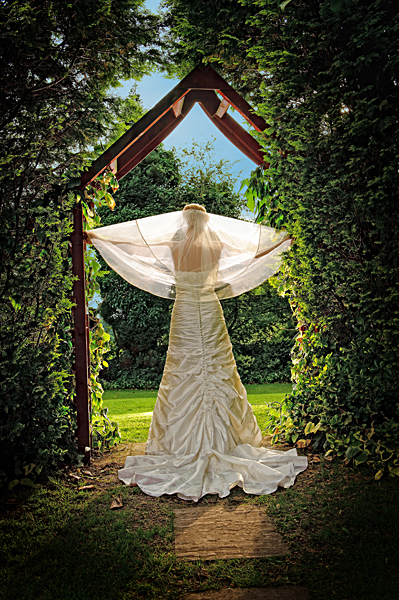 This image took a little bit of sorting. I swapped the 70x100cm folding softbox for a standard reflector, which I then placed about six feet in front of Michelle, angled up towards her upper body. This would ensure it would nicely catch the veil and underside of the arch. Because of the lack of diffusion, I found I had to turn down the output from the Safari to just under a quarter.

I had originally expected to have to move the 120cm octa back quite a distance to reduce the amount of fill on the back of the dress, but having turned down the output, the octa didn’t really need to be moved by more than a foot or so, and I’m not certain I really needed to do that, to be honest. 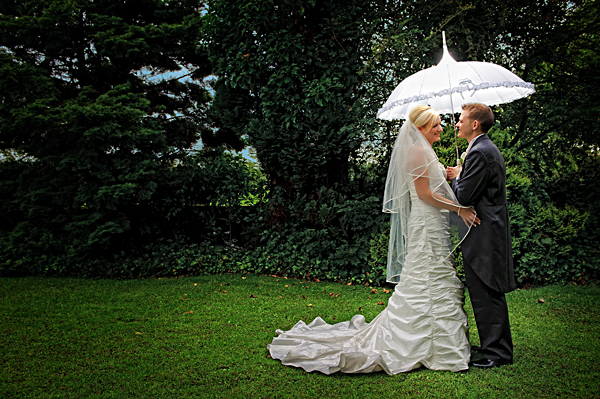 Complete change for this last image. I had moved John and Michelle nearer the trees at the end of the garden, which basically shut out any sunlight. I placed an SB800 speedlight inside the umbrella, and set it to ¼ output on manual. The head of the speedlight was set to fire upwards and into the brolly, with a stofen diffuser attached to hold the head away from the brolly fabric and allow the light to fill the brolly from the sides of the stofen. Otherwise, there would have been a hotspot on the brolly, with little light actually being reflected down to the couple.